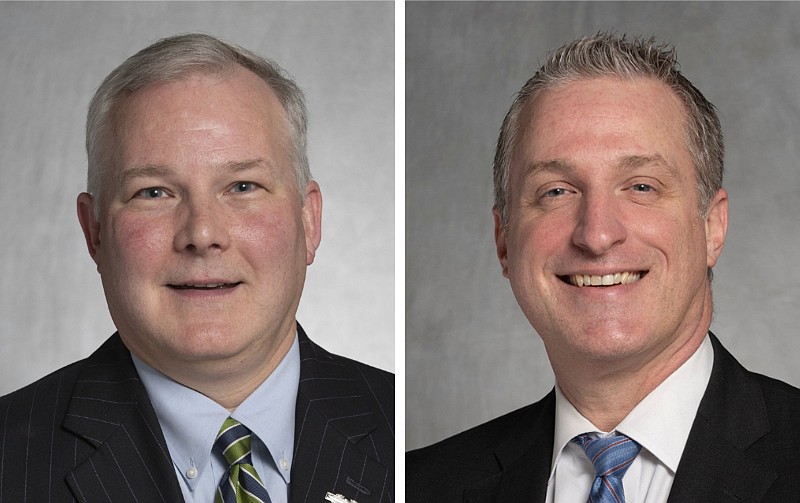 Arkansas Lt. Gov. Tim Griffin (left), a Republican, and Democrat Jesse Gibson, both candidates for the Arkansas attorney general's office, say they will examine radio and TV spending by the office if elected.

Two candidates running for the attorney general's office say they will examine radio and TV spending by the office if elected.

Advertising expenses are paid out of the office's Consumer Education and Enforcement fund, which is funded by money obtained from lawsuits won by the attorney general's office.

Rutledge, a Republican, has served as Arkansas' attorney general since 2015. She announced July 1, 2020, that she would run for governor in 2022, but withdrew from the race Nov. 9, 2021, to instead run for lieutenant governor. She is one of eight candidates running for that office.

Griffin described the amount of money spent by the office on TV and radio advertising under Rutledge as "wasteful and excessive."

"I will have a completely different approach that is consistent with the needs of the office and its responsibility to the taxpayers," Griffin said in an email. "If I have the honor of being elected Attorney General, I will learn everything I can about the operations of the office and will make decisions in accordance with what I learn."

Gibson said he too would significantly reduce money spent on TV and radio advertising if elected.

"This is the kind of taxpayer funding misuse that I would end as Attorney General," he said in an email. "TV and radio would be utilized only in a non-partisan fashion in order to inform and educate Arkansans about issues falling under the purview of the AG's office. Using taxpayer money to fund partisan ad campaigns is the behavior of creatures of Washington and has no place in elected office."

Jones said he has no idea how Rutledge came to her decisions on how to spend money for advertising, but he said it would be irresponsible to answer questions about how he would handle advertising expenditures considering he has never held the position.

"I will need to take time to review the entire budget, circumstances and scenarios before a well-thought-out and reasoned determination can be made," Jones said in an email. "As a conservative Republican, I will not increase the overall budget and I will make cuts where necessary to save as much money for the taxpayers as I am reasonably able to do while continuing to deliver services at a very high level for the citizens of Arkansas."

Priest noted that public service announcements are paid for with money from lawsuit settlements, not taxpayer-funded general revenue, and the announcements amount to approximately 6% of settlement money the attorney general has allocated over nearly eight years.

Starting in July 2020, Rutledge changed her office's ads to remove her name, image and voice. In mid-August 2021, she abandoned those changes in a commercial in which she and five staff members said they had been vaccinated for covid-19 and urged others to get the facts about the vaccine. The commercial aired from Aug. 16 through Oct. 23, according to a spokeswoman for the office.

Prior to fiscal 2020, the largest amount the office had spent on radio and television ads since 2008 was $459,000 in fiscal 2014, when Democrat Dustin McDaniel was attorney general.

Griffin said for every office he has held, whether in Congress or as the state's lieutenant governor, he has found ways to spend less than his budget.

"I will continue to look for ways to do more for less money and be a good steward of Arkansans' hard-earned tax dollars," he said.

As attorney general, Gibson said he would issue either a 30-day, 60-day, or 90-day moratorium prior to any election. During the moratorium, no TV or radio ads would be purchased by the office for any reason in an effort to avoid the appearance of impropriety.

"What I will not do is use the Attorney General's Office and taxpayer dollars for my own benefit or to drive Arkansans further apart," Gibson said in an email. "However, if facing time-sensitive issues in which voter education is very important, I would consider using my name, image and voice in materials coming from the Attorney General's Office. When these are done in an honest and non-partisan fashion, there is no reason the people's attorney should not speak to them directly."

Gibson said he wants to be a trusted messenger.

"If an opportunity arises in which it is necessary for Arkansans to hear from their elected official, I will consider speaking to them directly," he said.