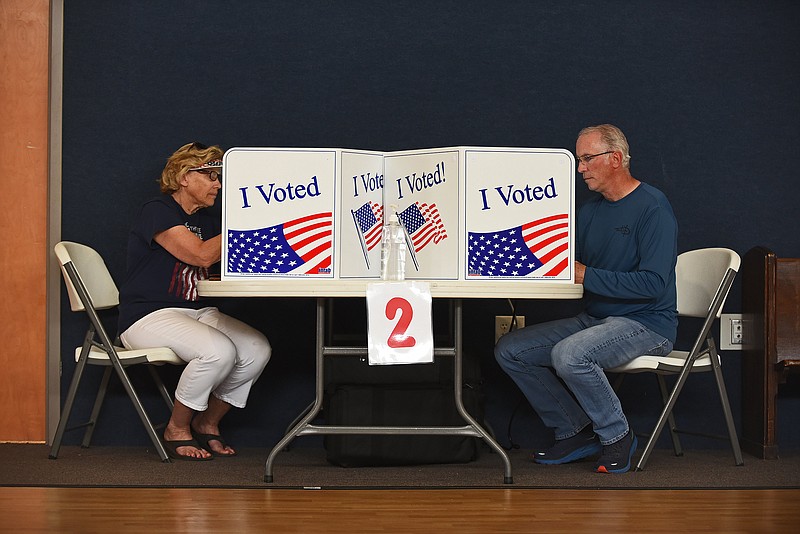 Suzie Mitchell and Greg Rusher, both of Sherwood, fill out their ballots during early voting Friday, May 20, 2022 at First Christian Church of Sherwood. (Arkansas Democrat-Gazette/Staci Vandagriff)

Though early voting has been higher than expected in parts of the state, the Arkansas secretary of state's office is sticking with its forecast that about 20% of the state's 1.7 million registered voters will cast a ballot in Tuesday's primary election, with a U.S. Senate seat and the governor's office at the top of the ticket.

Kevin Niehaus, a spokesman for Secretary of State John Thurston, said Friday that voter turnout has been steady throughout the early voting period and officials in the secretary of state's office expect that roughly 155,000 Arkansans will have cast their ballot by the end of the day Saturday.

"Early vote turnout has exceeded what we have seen in recent primary elections," he said. "However, it's hard to say what the final percentage of early votes will be since we can't predict what the election day turnout will be."

With Republican Gov. Asa Hutchinson of Rogers barred from seeking re-election by the state's term limits amendment, voters are choosing among two Republicans and five Democrats to be each party's nominee.

Voters will decide the primary nominees for the state's other constitutional offices -- which include contested Republican primaries for attorney general, secretary of state and treasurer, as well as a contested Democratic primary for secretary of state -- and will determine whether to re-elect Supreme Court Justice Karen Baker, who faces a challenge from Circuit Judge Gunner DeLay of Fort Smith and Supreme Court Justice Robin Wynne, whose ouster is sought by attorney David Sterling of Little Rock and District Judge Chris Carnahan of Conway.

If neither Wynne, Carnahan nor Sterling manage to get a majority of the votes, a runoff will be held in November.

Melinda Lemons, election coordinator of the Pulaski County Election Commission, said Friday that she expected voter turnout to be larger than the 20% of registered voters she originally anticipated in the primary in Pulaski County.

"I'm thinking that we may end up more toward 30% turnout, since we have several races and early voting numbers are up more than they were in the March 2020 presidential primary," she said in a written statement.

"In 2018, only 30% of the total votes cast were during early vote," she said in a written statement.

"It is hard to predict if our early vote numbers will be only 30% of total votes cast or closer to the higher percentage of votes cast during early voting in 2020," Price said. "We are still planning for a higher than normal turnout, since it is always better to be overprepared than underprepared."

Faulkner County Clerk Margaret Darter said Friday she also expected voter turnout to be higher than the 20% of registered voters who she had projected in the primary.

"Based on the numbers so far, I do feel like the voter turnout will be more like 28 percent," she said. "It's hard to predict how many voters will vote on May 24th, but based on the turnout so far I do anticipate the turnout to be higher than the 20% in 2018."

Faulkner County has numerous contested school board races along with a contested county judge, collector and sheriff's races, not to mention the state races, Darter said.

"Because all the candidates are out working really hard, I believe that is causing the voters to take notice of this election and they are showing up to vote," she said.

Faulkner County has been the battleground for two of the more hotly contested Republican primary legislative races in the state: the state House race between state Rep. Mary Bentley of Perryville and Faulkner County Quorum Court member Rose Roland of Conway and the state Senate race pitting state Sen. Mark Johnson of Ferndale against state Rep. Spencer Hawks of Conway.

Bentley said in an interview last week that Sanders' endorsement has been "a good boost" for her primary campaign.

"I endorsed her early on [for governor] and that's one of the reasons Tim Griffin endorsed my opponent," Bentley said in an interview.

She said she knows that because she received a phone call from Griffin, who wasn't happy after she endorsed Sanders for governor.

Sanders announced her bid for governor Jan. 25, 2021. On Feb. 8, 2021, Griffin announced his departure from the governor's race to run for attorney general.

But Griffin said Thursday in a written statement that "I endorsed Rose Roland because we need more thoughtful and effective conservative leaders in the state Legislature, and Rose has a proven track record and deep roots in the newly drawn district."

Bentley tweeted May 12 that she was honored to receive Sanders' endorsement and quoted Sanders as saying "Rep. Bentley has been a friend and supporter of mine since day one. Mary is a consistent conservative voice in the State House and I hope voters will join me in supporting her campaign for re-election."

Bentley said she is very confident she will win the Republican nomination for House District 54 on Tuesday, and that voter turnout will determine how close the race is.

Roland said Sanders' endorsement surprised her "but the people know me and they know I am a very strong conservative and approachable [and] I don't think it will move the needle."

She said she expects to win the GOP nomination in House District 54 and "I have ran this race hard enough to blow it out of water but I couldn't make any predictions" on her margin of victory.

Other hotly contested legislative Republican primaries on the ballot Tuesday include:

• The House District 47 race in which Wade Dunn of Greenwood is trying to beat state Rep. Lee Johnson of Greenwood

• The House District 61 race in which Jeremiah Moore of Clarendon and Josh Rieves of Arkansas County are vying to defeat state Rep. David Hillman of Almyra.

• The Senate District 21 race in which attorney Curtis Hitt of Paragould is seeking to oust Senate Republican leader Blake Johnson of Corning, who has been endorsed by Sarah Huckabee Sanders.

• The Senate District 22 race in which state Sen. James Sturch of Batesville is trying to hold off challenges from state Rep. John Payton of Wilburn and former banker Ethan Barnes of Hardy.

If none of the five candidates win a majority of the votes in the primary, the two top vote-getters will advance to the runoff election.

King said it's likely that a runoff election will be needed with five candidates in the race. He said Ballinger is unfit to serve in the state Senate.

Ballinger countered that he's a consistent conservative and King has a terrible record. He said he expects to be in a runoff election with King.

Four years ago, Ballinger defeated King by a margin of 4,245 votes to 3,871 in what was Senate District 5 before the state Board of Apportionment approved new boundaries for legislative districts in November.