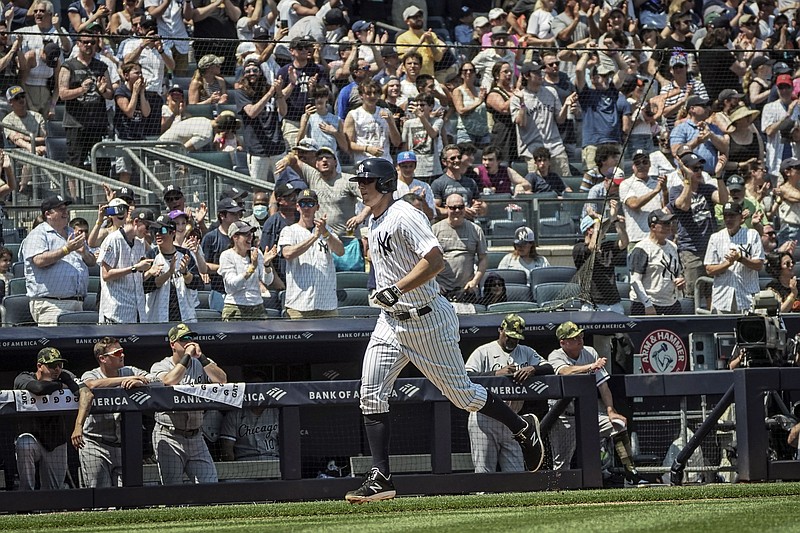 New York Yankees' DJ LeMahieu (26) heads for home after hitting a grand slam in the second inning of a baseball game against Chicago White Sox, Saturday, May 21, 2022, in New York. (AP Photo/Bebeto Matthews)

"He just made a, you know, disrespectful comment," said Anderson, who is Black, "Basically, it was trying to call me Jackie Robinson. Like, 'What's up, Jackie?' "

"I don't think it was called for," Anderson added after New York's 7-5 win at Yankee Stadium.

Major League Baseball is investigating the incident and speaking to those involved.

Anderson, an All-Star who is among the leading Black voices in baseball, told Sports Illustrated in 2019: "I kind of feel like today's Jackie Robinson ... because he changed the game, and I feel like I'm getting to a point to where I need to change the game."

Donaldson said that in the first inning, "I called him Jackie." The white ballplayer also said he has "joked around" with Anderson in the past using the same reference and mentioned the 2019 Sports Illustrated interview.

Robinson broke the MLB color barrier in 1947. Every team in the big leagues has retired his No. 42 to honor the struggle, sacrifice and social impact he had on the game and beyond.

"My meaning of that is not any term trying to be racist by any fact of the matter," Donaldson said. "Obviously, he deemed it disrespectful," he said. "And look, if he did, I apologize. That's not what I was trying to do by any manner and that's what happened."

ANGELS 5, ATHLETICS 3 Mike Trout scored his 1,000th run in the majors, Michael Lorenzen threw six innings of three-hit ball for his fifth win and Los Angeles snapped a four-game losing streak with a win over Oakland.

TWINS 9, ROYALS 2 Joe Ryan struck out six and Minnesota capped the game with a four-run ninth inning in a win over Kansas City.

BREWERS 5, NATIONALS 1 Andrew McCutchen hit a leadoff home run and Brandon Woodruff (5-2) allowed one run in six effective innings for Milwaukee in a win over Washington.

DIAMONDBACKS 7, CUBS 6 (10) Daulton Varsho drilled a two-out, three-RBI double in the 10th inning then scored on a throwing error by Andrelton Simmons to give Arizona a comeback win over Chicago.

METS 5-3, ROCKIES 1-11 Starling Marte homered in his return to the lineup, and New York beat Colorado in the first game. In the second game, Brian Serven homered twice and drove in four runs to give Colorado a split.