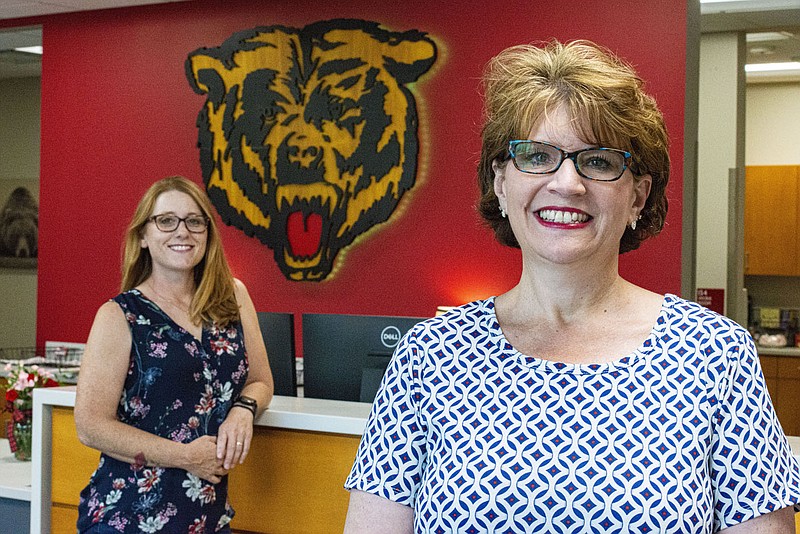 Keri Rathbun (right), principal of Northside High School, and Aimee Brinkley, a biology teacher at the school, stand Thursday, May 19, 2022, near the school's entrance in Fort Smith. Rathbun was recently named Arkansas secondary principal of the year, while Brinkley was chosen as Fort Smith's teacher of the year. Go to nwaonline.com/220522Daily/ for today's photo gallery. (NWA Democrat-Gazette/Hank Layton)

Rathbun, Northside's principal since 2017, previously was a principal at Kimmons Middle School, as well as a counselor throughout the district.

Brinkley has been a pre-Advanced Placement and AP biology teacher at Northside since 2004. She's also the instructional chair of the school's science department and an assistant coach for the girls' softball team. She earned the Arkansas Teacher of the Year award from the National Association of Biology Teachers in 2016.

Both Brinkley and Rathbun said they were surprised to be nominated for their awards, which was followed by an application process once they were named finalists, and a surprise celebration by the district when they were ultimately selected on May 9 and May 6, respectively.

"It felt great. It was very surprising," Brinkley said. "I submitted the video and kind of forgot about it and just went about my business, so it was exciting."

"This was all of the secondary principals in the state of Arkansas, and I know many of them, and they're very worthy educators, so I feel very honored and very humbled to be considered this," Rathbun said.

Brinkley said she didn't know what made her stand out as a teacher of the year candidate, as she was just working hard and going about her business.

Rathbun recalled the same day she was writing Brinkley's letter of recommendation, Brinkley had a classroom full of students working on a mock AP biology test.

Ben Maurer, Northside's senior class president, said he was in both of Brinkley's classes, and entered pre-AP biology despising science.

"Then I kind of grew to like biology a lot, so I decided to take AP biology the next year with her," he said. "It's a hard class, but she's a great teacher, and I actually ended up passing the AP exam and getting college credit for biology. So Ms. Brinkley is a great teacher, knows what she's talking about, and really loves this school as well."

Maurer was also the one to write a student recommendation for Rathbun's nomination. She's an amazing principal who has helped the school culture thrive, he said.

"She's really just helped this school come alive, and done a lot of things that positively benefit all the kids here. Everybody here loves her, and she's very deserving and works very hard and is just great at her job," Maurer said.

"I'm just the principal, and I couldn't do my job if it wasn't for the teachers and the students and parents that support me," Rathbun said. "All the great things that have happened at Northside, it's because of the people I work with and their hard work. I just get to work with them. So I really think that's what helped me win, because I was able to talk about the things that we've done. But we've done it as a team."

Rathbun recently accepted the director of coordinated school health and career counseling position for the district, meaning she will be responsible for establishing a comprehensive initiative to address the components of coordinated school health, as well as provide instructional and leadership services to prepare students with the related academic critical thinking, workplace readiness and technical skills essential in pursuing career pathways. A new principal hasn't been announced at this time.

"Dr. Rathbun cares about the future of each of her students," said Tony Jones, the School District's director of secondary education. "She has been instrumental in ensuring students have a plan when they enter high school and supports students in achieving their goals. Northside High School has experienced an abundance of success over the previous five years thanks to Dr. Rathbun's leadership."

Rathbun said she was surprised when she was named principal of the year, as she thought the celebration was her going-away party.

"And when I walked in, there were cheerleaders and streamers, and I thought, 'Wow, everybody's really happy that I'm leaving.' So that kind of threw me a little bit until I saw everyone else, but it was really nice," she said.

Brinkley and Rathbun said the next step is the state teacher of the year and national secondary principal of the year designation, respectively. They recognized the unique occurrence of both being recognized from the same school, and attributed it to all of the amazing things already happening at Northside.

"I think it's great for the school," Maurer said. "I think that shows the public and people who are thinking about sending their kids to school here how awesome of a place that this school is, how it's thriving and how everybody at the school pretty much loves it here. It's mostly because of the teachers and administration, and that of course this just goes to show that." 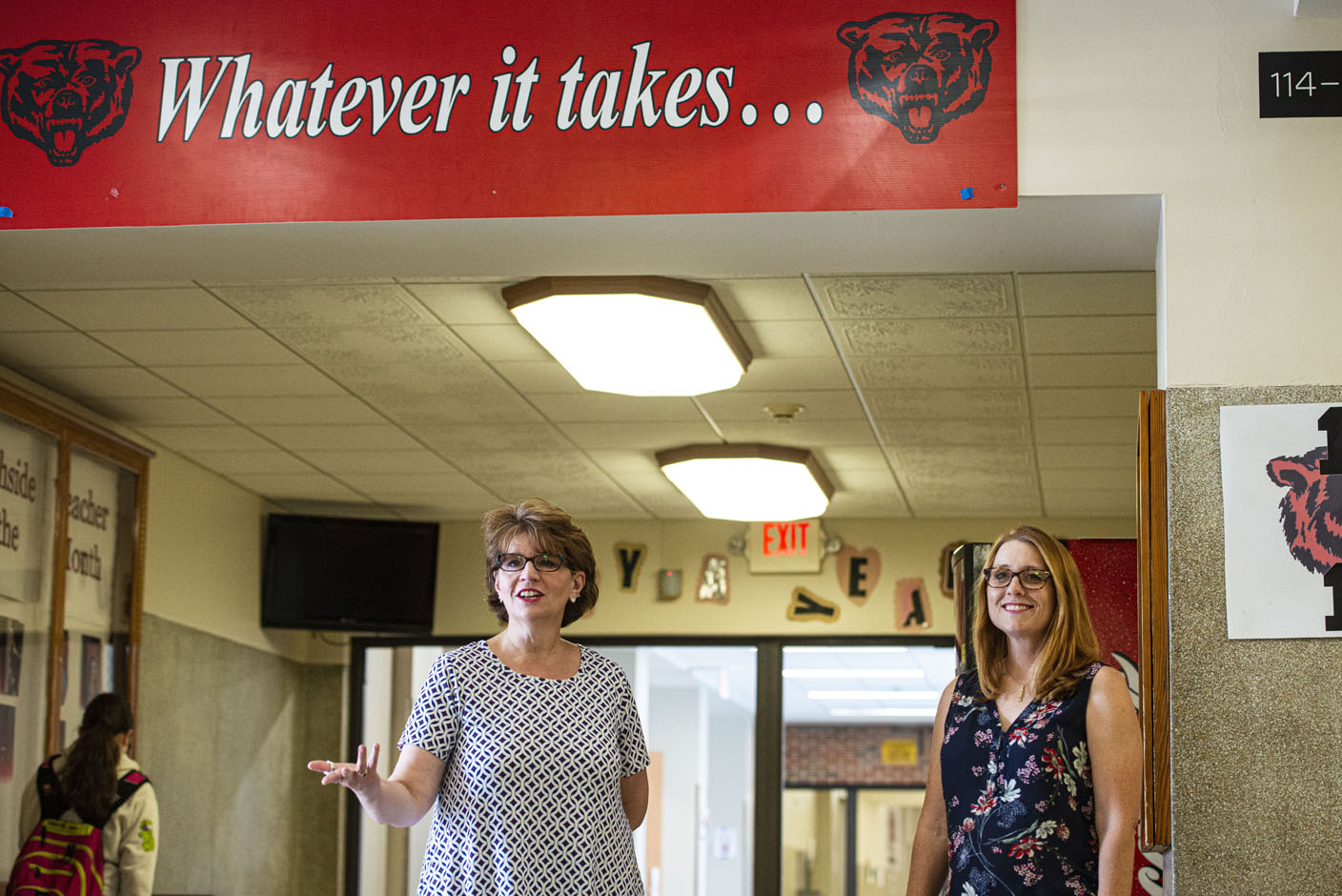 Keri Rathbun (left), principal at Northside High School, visits with Aimee Brinkley, a biology teacher at the school, on Thursday, May 19, 2022, in a hall in the school in Fort Smith. Rathbun was recently named Arkansas secondary principal of the year, while Brinkley was chosen as Fort Smith Public Schools' teacher of the year. Go to nwaonline.com/220522Daily/ for today's photo gallery. (NWA Democrat-Gazette/Hank Layton)