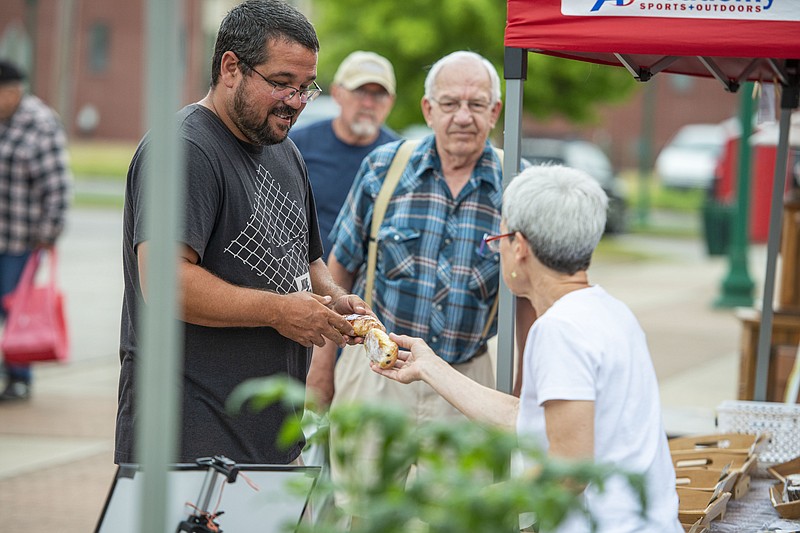 Matt Mewton of Van Buren purchases baked goods from merchant Kathy Mazyck on Saturday, May 21, 2022, at the Fort Smith Farmers Market in downtown Fort Smith. The event features vendors selling produce, flowers, crafts and other homemade or homegrown products and is open every Saturday morning year-round, as well as on Wednesday mornings during the summer. Visit nwaonline.com/220522Daily/ for today's photo gallery..(NWA Democrat-Gazette/Hank Layton)

FORT SMITH -- A weekly event is preparing for its busiest season. The warm, summer weather brings many visitors to the Fort Smith Farmers Market.

The event is so well attended during the summer, a second market takes place from 8 a.m. to noon Wednesdays, typically from June through August.

"It won't be open until we have the vegetables in, because that's the main reason to have it open those three months, when the vegetables are at their peak," market secretary Kathy Mazyck said.

Mazyck said it's typical to see 500 to 600 people at the market during the peak season. She described it as a true farmers market, explaining there's about 75% food vendors and 25% product vendors, which is different from a flea or craft market.

"We're one of the few farmers markets that has certified, organic farmers there," she said. "Our focus is on the produce, and we encourage people to eat healthier. But we also have really good baked goods. Some gluten-free and dairy-free. We have farm fresh, non-GMO eggs, and we just try to offer the best products that we can that are healthy. We try to have good prices so everybody can afford them."

Mazyck also has been a vendor in the market for five years, selling French-style baked goods through her business Lucky Spreads and Pastries.

"I've been a patron of the market for 20 years and I've always baked, and when I retired I thought I might just do a little bit at the farmers market every week, for something to do that I liked," she said. "It turned out that now I can't make enough. I sell out every week, and I work all week at it."

Mariah Newman said she and her husband, Aaron, similarly got involved in the market about six years ago. She said they wanted to fill time doing something creative, and knew about the farmers market through growing up in the area. Their solution was to sell hand-crafted glass art and jewelry under their combined business name, Aariah Sol Glass.

"It's a lovely community event," she said. "We had gone down there a few times and kind of heard through the grapevine that it might be a place for us to possibly vend and set up our goods. And I'm glad that we did, because it feels like we just fit right in. They're pretty much a second family now."

Michael Farquhar said he and his wife just got involved in the farmers market last year, selling flowers, fruit and vegetable plants and starts through their business Pleasant Acres Garden. He said he's seen a great response from the community so far and thinks they see the value in supporting local businesses.

"We have a little following," Farquhar said. "We have our regulars who will get in contact and ask us for certain things. We provide them. We give them advance notice when there's fresh stuff available. So there's a conversation that happens between producer and customer, which I think is beneficial. So I like it."

"We're also a little educational," he added. "I think we're introducing some more exotic, stranger foods. We're kind of changing peoples' diets in some respects. I think we're offering people a chance to save money, as well, with the plant starts. If you can grow your own food, it's an empowering act. I think we're helping with that process. And it's part of a greater kind of understanding of food, where it comes from, how it's produced, who produces it and who consumes it. I think we're all apart of that conversation."

Mazyck said a new thing the farmers market is doing this year is selling tokens for a dollar, which work similarly to a gift card. She said they can be given out to people in the community to entice them to visit the market, and a portion of those proceeds will go to Hope Campus in Fort Smith, which provides services for homeless people.

"So we are really kind of stoked about that," she said. "We didn't know how it would go over to start with, but we've had it three weeks, and in the first two weeks we've sold over 400 tokens already."

Those interested in vending at the event can email fortsmithfarmersmarket@gmail.com for more information.