Congressional delegation not taking anything for granted, strategists say by Ryan Tarinelli | May 22, 2022 at 5:23 a.m. 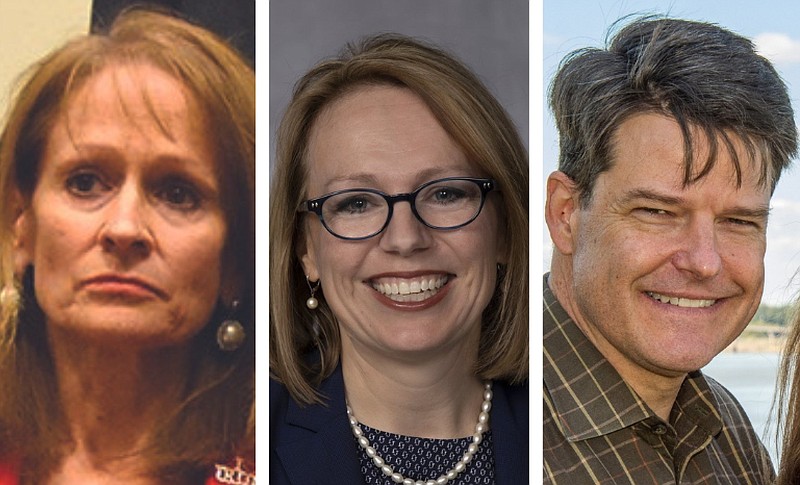 From left, Jonelle Fulmer, chairwoman of the Arkansas Republican Party; Celeste Williams, a nurse practitioner in family practice who ran for Congress in the 3rd Congressional District in 2020; and Grant Tennille, chairman of the Democratic Party of Arkansas, are shown in this undated combination photo.

WASHINGTON -- The state's Republican primary on Tuesday will all but decide the next congressional delegation from Arkansas given the unlikelihood of Democratic upsets in November, according to political observers and strategists.

"This is a foregone conclusion for the foreseeable future. It's going to be a Republican juggernaut almost all the way up and down the ballot," said Janine Parry, a professor of political science at the University of Arkansas, Fayetteville.

The Republican Party remains the dominant force in the state's politics, and former President Donald Trump won Arkansas by a greater margin in 2020 than he did during the 2016 presidential election.

Meanwhile, Democratic candidates running in Arkansas congressional races have yet to come close in matching the financial power held by Republican incumbents seeking reeleection, according to Federal Election Commission filings.

Nationwide, Republicans are looking to take back control of the U.S. House this election cycle, leaning into the discontent expressed over Joe Biden's presidency.

But even with the favorable outlook, Republicans in Arkansas are not taking the situation for granted, said Jonelle Fulmer, chairwoman of the state Republican party.

"We are going to work as hard as we can for all of our candidates after the primary and do our best to get them elected in November," she said.

Arkansas voters will decide five congressional seats in this election cycle -- one in the Senate and four in the House. All of the congressional races involve well-funded Republican incumbents who are running for reelection.

Incumbents in the U.S. House often retain their seats, according to OpenSecrets, a research group based in Washington, D.C. The reelection rate for House incumbents is often above 90%, according to the nonprofit.

Celeste Williams, a nurse practitioner in family practice, saw that dynamic firsthand two years ago when she challenged incumbent Republican Steve Womack in the 3rd Congressional District. Before the campaign even started, Womack held name recognition and a large financial war chest, she said.

Williams raised more than $350,000 over the course of her campaign, but still came up short in the 2020 general election. She garnered 31.8 percent of the vote while Womack walked away with 64.3 percent, earning him another term in Congress.

Womack's campaign committee brought in $1.12 million during that election cycle and spent more than $900,000, according to an FEC report.

Grant Tennille, chairman of the Democratic Party of Arkansas, said in a statement that the party in the current election cycle is focused on the state General Assembly, statewide races and growing the party.

"Our most important goal in 2022 is to break the Republican stranglehold on the legislature," he said in a statement.

Filings with the Federal Election Commission show that Democrats running for Congress in 2022 are not bringing in significant fundraising hauls.

For example, Lauren Mallett-Hays, a speech-language pathologist, is a Democratic candidate for the state's 3rd Congressional District. Her campaign reported having $743 on hand as of May 4, according to an FEC report.

The report shows her campaign receiving more than $31,000 in contributions this election cycle, including at least $5,000 from Mallett-Hays herself.

In comparison, the campaign of incumbent Womack reported having a cash-on-hand total of $1.78 million as of May 4. His campaign committee brought in $954,055 this campaign cycle, according to their pre-primary report.

Womack faces a primary challenge from Neil Kumar, whose campaign committee raised more than $72,000 in contributions this election cycle and had on hand $31,823 as of May 4.

A similar dynamic is playing out in the state's 2nd Congressional District where U.S. Rep. French Hill's campaign reported a cash-on-hand total of $1.58 million as of May 4. This month, the campaign for Democratic candidate Quintessa Hathaway reported they had "not reached the $5,000 threshold in contributions and expenditures in order to file a pre-primary report."

Hathaway, an educator and an entrepreneur, said the top priority of her campaign is voter registration, voter mobilization and getting the turnout up.

Conrad Reynolds, a Republican and combat veteran who is also challenging Hill in the Republican primary, reported having $5,265 on hand as of May 4.

Two of the three candidates in the Democratic U.S. Senate primary on Tuesday also aren't reporting being flush with money either, according to the latest FEC filings. One Democratic candidate, Dan Whitfield of Bella Vista, had a cash-on-hand total of $2,445 as of May 4, according to his campaign's filings.

And, the last fundraising report from Natalie James, another Democratic candidate for Senate, showed a cash-on-hand total of $7,385 at the end of 2021. Jack Foster, a former Pine Bluff City Council member, is also a candidate in the Democratic primary but has not filed a campaign finance report with the FEC as of Wednesday.

By comparison, U.S. Sen. John Boozman, the incumbent, had a cash-on-hand total of $1.5 million as of May 4, according to his campaign's latest FEC filing.

Crawford's campaign held $543,379 at the end of May 4 while the campaigns for Smith and Shackelford had less than $6,000 on hand between their campaigns.

And the campaign committee for state Rep. Monte Hodges, the Democratic candidate in the 1st District, held $12,762 at the end of March.

A congressional candidate would need several hundreds of thousands of dollars to run a competitive campaign, said Richard Bearden, an Arkansas Republican strategist and a founding partner of Impact Management Group.

Building a competitive campaign means having ground interaction with voters combined with using media platforms to get a candidate's messaging across, Bearden said. Campaigns need funds to compete on television, radio and social media platforms, he said.

"Donors have to see a vision and a path to victory and they certainly don't see that right now," Rett Hatcher, a GOP strategist and founding partner of Capitol Consulting Firm, said of Democratic candidates in Arkansas. The firm is a government affairs and political consulting firm.

James said her campaign and others on the Democratic ticket are out in the community, spending time talking with people.

Whitfield, who is also running for Senate in the Democratic primary, says it's going to be a lot easier to raise money after the primary.