Hidden Gems: Let your favorite books take you down a rabbit hole of reading 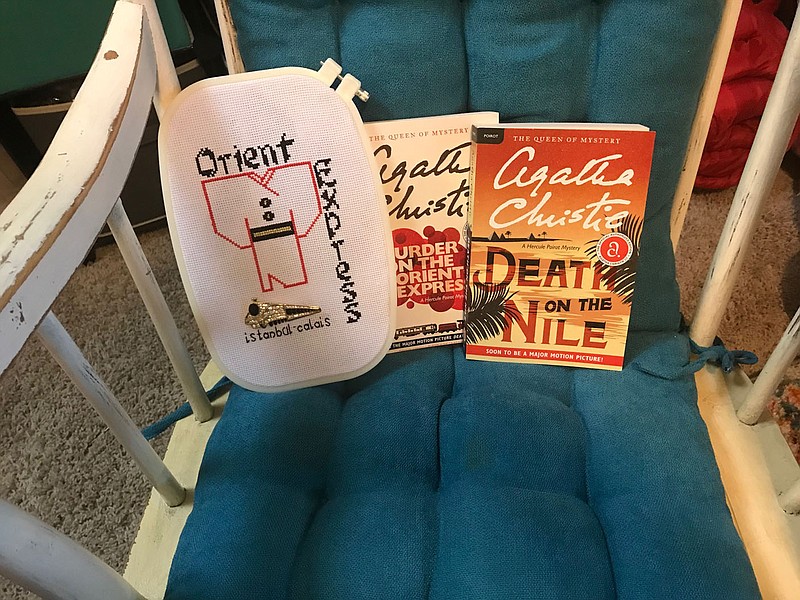 A springtime spent with a comfortable rocking chair and Agatha Christie has been a lot of fun for an inveterate reader — and inspired some cross-stitch art, too. (NWA Democrat-Gazette/Becca Martin-Brown)

I tried to watch the new Kenneth Branagh "Death on the Nile." Really I did. After all, it's based on one of my favorite Agatha Christie books.

I lasted less than 5 minutes.

I am a purist, and I admit it. There is one "Romeo and Juliet," released in 1968 and directed by Franco Zeffirelli. I eventually adapted to "Star Trek: The Next Generation" and "Deep Space Nine," but that was the end for me. I don't want sequels to Harry Potter or Star Wars. And if it sounds like get off my cultural lawn, so be it.

But I've also developed this weird fascination as I've gotten older of crawling into a particular book or series of books and living there for six months or so. I read and re-read. Listen and re-listen to narrated "books on whatever-it-is-they're-on-now." Watch the various film and TV versions that are available -- or try to! Catch references from book to book that you'd never notice on a single pass and go sideways into research to find out more about the language the characters use and the world they live in.

Since about Christmastime, I've been engrossed in Christie's Hercule Poirot books. It's not my first time around; I was a big fan of Christie when I was a teenager -- back when books were only printed on pieces of paper. This time, I have come to the unalterable decision that as far as Hercule Poirot goes, there is only one: David Suchet, who played Agatha Christie's little Belgian detective on British TV for 24 years. He is droll. He is witty. He is fastidious. He is kind -- and fierce and occasionally ornery. And when he "twinkles" -- a description actually used by Christie in print -- the world is a happy place.

But this is a book column, and I'm here to try to encourage you to give my "rabbit hole" method a try, particularly if you liked but have only experienced Branagh's "Death on the Nile" and "Murder on the Orient Express." There is so much depth beyond what you could ever put in a film -- because audiences won't sit still for six hours! -- and characters that you will never meet on the screen as they were written. That includes one from the "Orient Express" that is among my all-time favorites, much in the vein of Carol Burnett's Dotty Otley in "Noises Off."

Her name is Mrs. Hubbard -- Caroline Martha Hubbard, as I know well by now -- and she is a wacky sort of busy body unlike any depiction of her I've seen on film, including in Suchet's "Orient Express."

Here are just a few of my favorite passages about her:

"Poirot, by now, knew all about Mrs. Hubbard's daughter. Everyone on the train who could speak English did! How she and her husband were on the staff of a big American college in Smyrna, and how this was Mrs. Hubbard's first journey to the East, and what she thought of the Turks and their slipshod ways and the condition of their roads."

"Suddenly, I woke up -- all in the dark, it was -- and I knew there was a man in my compartment," she says later. "And I thought, 'Well, anyway, he won't get my jewelry. Because, you see, I'd put that in a stocking and hidden it under my pillow -- which isn't so mighty comfortable, by the way, kind of bumpy, if you know what I mean. But that's neither here nor there. Where was I?"

"Triumphantly she hauled a large handbag into view and proceeded to burrow in its interior. She took out in turn two large clean handkerchiefs, a pair of horn-rimmed glasses, a bottle of aspirin, a packet of Glauber's salts, a celluloid tube of bright green peppermints, a bunch of keys, a pair of scissors, a book of American Express cheques, a snapshot of an extraordinarily plain-looking child, some letters, five strings of pseudo Oriental beads and a small metal object -- a button.

"You see this button? Well, it not one of my buttons!"

"You didn't hear him snore after you had the scare about a man being in your compartment," Poirot asks.

What makes her even funnier -- beyond Christie's unerring use of words like "hauled" and "burrow" and "slipshod" and "pseudo" -- is she's doing improvisational theater, pretending to be a past-middle-age, dumpy all-American mother devoted to her daughter and those "cunning" grandchildren. But she's not. She's the tough-as-nails grandmother of the victim in the Daisy Armstrong kidnapping and murder case -- the reason why a dozen people come together to deliver vigilante but well-merited justice to a passenger on the Orient Express -- and was until the tragedy a great star of the stage.

"I always fancied myself in comedy parts," she says when the truth comes out, admitting one of the mistakes that gave her away to Poirot happened because "you should always rehearse properly."

Of course, what I love most about stories told in print is that you can see them and hear them in your own head. My Mrs. Hubbard can look like Carol Burnett if I want her to. Yours doesn't have to. But either way, she's almost sure to be a more sympathetic character than you'll find on film, because you know her so much more intimately.

The same is true for the character of Jacqueline de Bellefort in "Death on the Nile." Yes, she does in fact kill two -- well, actually four -- people in cold blood. But, as she says tragically, she has to follow her star until it burns out.

So do we all. Yours may not take you into a rabbit hole like mine does, listening to a book being read to me by a wonderful narrator -- in this case, oftentimes David Suchet himself -- while I cross stitch happily with a dog or two in my lap. (Good heavens, I sound ancient!) But if there is a book or a series you love dearly, books like The Lord of the Rings, The Wizard of Oz, Harry Potter or Robert Heinlein's Lazarus Long collection, spend some quality time with them while you're sitting by the lake this summer. You just might find a whole new appreciation for them -- and the printed word. It's still one of my favorite things.

Print Headline: Hidden Gems Let your favorite books take you down a rabbit hole of reading