Maradyth McKenzie was raised to help others in need. As outgoing president of Junior League of Little Rock, she put her commitment to work in several arenas. by Jenny Boulden Special to the Democrat-Gazette | May 22, 2022 at 3:22 a.m. 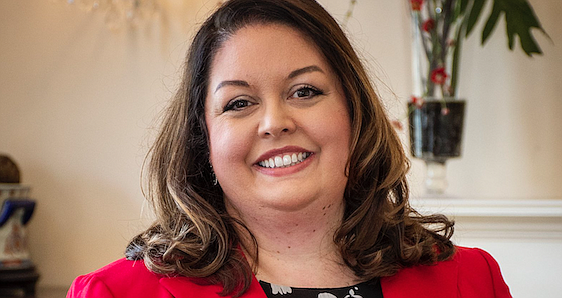 Maradyth McKenzie on 05/11/2022 at the Junior League of Little Rock Building for a High Profile Cover Story (Arkansas Democrat-Gazette/Cary Jenkins)..DO NOT USE UNTIL AFTER PUBLICATION IN HIGH PROFILE. CHECK WITH HP EDITOR RACHEL O'NEAL BEFORE USING.

Maradyth McKenzie is not big on sitting still. The outgoing Junior League of Little Rock (JLLR) president, a real estate agent for The Property Group after years in the nonprofit world, laughs easily and often. She's warm, effusive, proactive and oh-so-capable -- unless asked to sit for long stretches not actively engaged in making something better. That drives her crazy.

"I do well around people," she explains. "I've always been pretty active. But my husband will tell you, I don't do well sitting. Even on our vacations, I don't go to the beach and sit. I try to do it for him, but I've always got a project; I'm always working toward something."

"She multitasks beyond my understanding," says her mother, Karen Fullen, a retired social worker. "And more things seem to always be tugging at her heart."

Growing up, McKenzie dreamed of being an architect. She was fascinated by engineering, construction and design, and particularly with historic buildings. In senior high, she visited the Fay Jones School of Architecture in Fayetteville, excited to see her chosen career up close. But as she entered the large hall full of drafting tables and quietly concentrating students, that dream evaporated into the near-silent air.

"Everyone was hunched over with these blankets and headphones. They've got sleeping bags, and they're like, 'Yeah, we live here. We sleep on the floor.' You could hear a pin drop in there," McKenzie recalls, laughing. "And I was immediately, 'No, no, no! I can't do this for five years! I will not survive that!'"

Yet ultimately, the outgoing McKenzie did become a builder. Through her years working with nonprofits and small businesses, starting her family, restoring old houses and finding her dream career in real estate, she has been constantly building. Building relationships, leadership skills and bridges to her clients' dreams. And for the past year, as its 100th president during its centennial year, she has been building up the Junior League of Little Rock to enter its second century.

THE LEAGUE OF EXTRAORDINARY WOMEN

McKenzie joined Junior League in 2011 at the urging of friends she'd made while volunteering with the Little Rock Zoo and Court Appointed Special Advocates for Pulaski and Perry counties. Its members had become easy to spot.

"I was so impressed, because when they made a commitment, they showed up to do it. It wasn't just a placeholder for something they could put on a resume," she explains. "When we were at events, they were the last ones to leave. They were happy taking out the trash, doing whatever it took. And that's how I was raised to be. It was really neat to find women who embody that belief."

The diversity of Junior League experiences suits her energetic, curious temperament. "I connected with so many organizations," she says. "I could go work one three-hour shift at the Food Bank without committing to serve in some major capacity. I could go learn about CARE animal rescue. PAWS on the Runway, galas, all these different events I got to attend free as a volunteer."

Through the Junior League, McKenzie honed her professional skills in volunteer management, marketing, fundraising and event planning. "I remember running meetings [at work], and people asking me, 'How do you know how to do this?' Because you don't show up to a Junior League meeting and waste those women's time. You show up with an agenda. You stick to it. You get it done, and you leave. It also helped me learn how to have difficult conversations, and to offer members grace when they need it, as they had for me."

Tabitha McNulty, the incoming Junior League president next month, calls McKenzie "super spunky," a passionate leader with vision and focus, and who can adapt to change.

"This has obviously been a difficult year with omicron and trying to stabilize the league after the two years of disruption from covid," McNulty says. "But Maradyth has said on multiple occasions, 'If we're here to do the work, then let's really get in and do the work. And let's do all the work, and not just the surface work."

That's been true all her life.

McKenzie comes from one of the oldest families in Greene County history. Her parents, Karen and Paul Hopper of Paragould, divorced when she was a toddler, and Karen moved with Maradyth, then 3, to Little Rock. McKenzie says she grew up in the 800-square-foot duplex they shared, watching her single mother work long hours as a social worker, a difficult, demanding career she absolutely loved.

At 13, McKenzie returned to Paragould with Karen, who had married her ex-fiance from college, Charles Fullen. She would live there among family until graduating from high school at Greene County Tech. "I have been blessed with three of the most wonderful parents anyone could have. All three were always there for me, and they were an amazing safety net," McKenzie says. The big hearts of all three shaped their daughter.

Fullen says her daughter is a natural leader, focused and not easily deterred. "Even as a very young child, she had a very in-charge attitude," Fullen says. "Sometimes girls are after popularity. Maradyth was always more about, 'What can I do to make something better?'"

That's never faded. She remains a person who sees the best in people and is energized by working with them. Yet her father, "a brilliant attorney," was as withdrawn as she was outgoing. Though he specialized in bankruptcy law, Paul had a soft spot for his clients' financial straits and had a hard time charging them. "He was 40 when I was born," McKenzie says. "We didn't realize until 2014, after he'd retired, that he'd actually had early onset dementia for most of my life, just undiagnosed."

McKenzie graduated from Hendrix College in Conway with a double major in politics and business/economics, and a minor in theater. In her junior year, someone caught her eye. Colin McKenzie was a tall, highly introverted freshman from Eureka Springs. Despite their polar opposite social energies, the following year the two were engaged. A few months after Colin graduated two years later, they married.

In 2013, the couple had their "wild, redhead" son, Connor. "He's about to be 9. He is wonderful, but I'm now getting to constantly apologize to my mother and my husband, because Connor is so much like me," McKenzie laughs.

Colin's now an internal auditor for the National Guard. For Christmas, she gave him a custom T-shirt that reads, "Emotional Support Human."

"Colin's my rock. He's very introverted, very smart and the perfect complement to my big dreams, my big personality," she says. "I'm so thankful to have had him through this crazy time. It has been a wild ride, but we have been there for each other all along."

The years 2015 through 2021 were largely parent-focused for the McKenzies, full of grief and worry. In 2015, Paul's dementia was increasing, so McKenzie moved him closer, then into assisted living when it became necessary. Her mother says, "She had to take charge of his affairs. That's extremely difficult, I think, especially for an only child. But Maradyth was meticulous and loving while making very tough decisions on his welfare and his care."

A few days into 2018, her father died in hospice. Ten months later, Colin's father, Wally McKenzie, died of cancer. Then, their Corgi died. Then, Karen spent much of 2019 to 2021 gravely ill. Amidst the pandemic, Karen, a cancer survivor, struggled with a liver transplant that kept her hospitalized about five months, only to be diagnosed in 2021 with calciphylaxis, which McKenzie says Karen "somehow, magically," managed to survive. With clear joy and relief, McKenzie says her mom is now doing great.

Meanwhile, McKenzie's own career took shape. In college she interned for Sen. Blanche Lincoln and Rep. Vic Snyder in Washington, drawn to a "behind-the-scenes" career in politics. After Hendrix, she worked on campaigns for Gov. Mike Beebe and Lt. Gov. Bill Halter, before deciding she needed more stability.

Wanting to help the populations at the center of her mother's 43-year career, she moved into nonprofit work. She was hired at Women and Children First, then at the Coalition Against Domestic Violence, where she traveled around the state, training volunteers at grassroots shelters. She loved the work, but after four years on the road, she decided she needed a break.

McKenzie's version of taking a break was starting a new job at the Arkansas Small Business Training Development Center and getting her MBA on the side. Missing nonprofits, she then joined the staff at the Girl Scouts in Little Rock as membership director. When her position was eliminated two and a half years later, she left the workforce to spend time with her father, whose dementia was advancing.

For years, she and Colin had been buying, renovating and selling houses. "We did it ourselves, thanks to Colin's dad, a retired contractor, teaching us all we needed to know."

Those sales kept them afloat on a single income, while introducing McKenzie to her passion. "I was learning a lot about real estate transactions, working with Cara Hazelwood at The Property Group," McKenzie says. "I loved the details and negotiations."

McKenzie in 2018 earned her real estate license, just after Paul Hopper's death, and at the start of the McKenzies' hardest year. "After we got through all that, I realized how much I enjoyed this path," she says.

She'd worked in nonprofits because she'd wanted to serve, but as a Realtor found immense satisfaction helping people more directly. "It's so wonderful. It's a tough job. We work constantly. I think a lot of people don't realize how challenging real estate sales is," she says. "My brain is like Chrome with 50 tabs open, but I'm never bored. Buying a house is a significant life decision; to be the cog-wheel holding it all together can be a lot of pressure. But, it's what I was always meant to do."

"I'm thrilled Maradyth has found a vocation that she loves," her mother says. "I always told her growing up, 'You have to find work that you love, and it will never be work.'"

"Being our 100th president has been an honor I never thought I would get to have. I attribute any abilities or skills that I have in leadership to the women I've served with; we've had to do so much problem-solving, canceling, rescheduling, rethinking," she says. "As a Type A person, planning things three or four times this past year only for them to still fall through has challenged me. But we've learned so much. And we're a learning organization, so I tell myself, 'This was my learning journey; this was what was meant to be.'"

Among the plans that got reworked because of the January omicron surge was the centennial kick-off. In lieu of the planned news conference, all-members meeting and splashy reception, the Junior League of Little Rock issued a news release and met via Zoom. "It was so sad," she says. "But we also still did it, and we still celebrated, and we're still excited. It wasn't going to keep us down."

Wrapping up her presidency, McKenzie is looking forward to having more time with her family, including her mom and step-dad, who have retired in Little Rock. But she isn't leaving Junior League behind.

"The League has always been a way for me to connect with other women and learn from them," she says. "Serving alongside some of the most compassionate, committed women I've ever known continues to inspire me. They motivate me to do more."