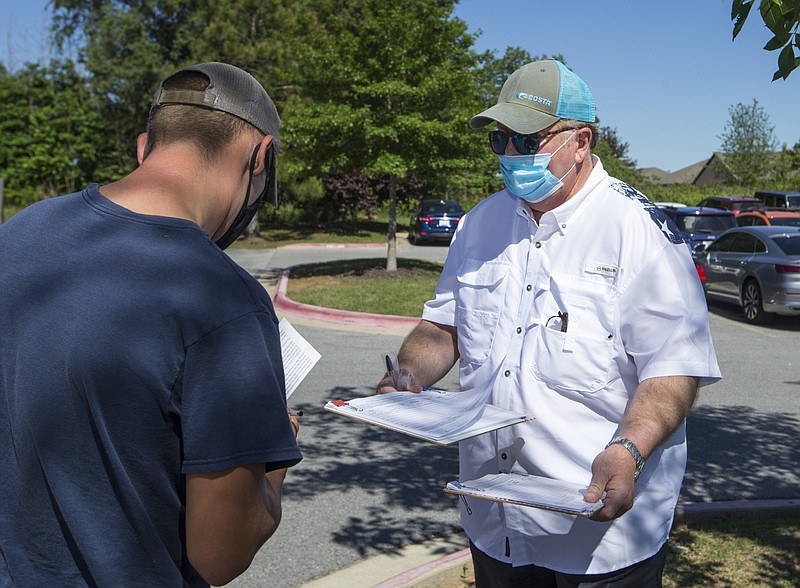 Jonathan Anderson (right) of Tucson, Ariz., with National Ballot Access takes a signature from David Wallace of Rogers while canvassing outside the Bentonville Revenue Office in this May 29, 2020 file photo. (NWA Democrat-Gazette/Ben Goff)

Arkansas voters who hit the polls on election day will likely see petitioners canvassing in support of proposed constitutional amendments legalizing recreational marijuana and removing Pope County as a casino location, along with a "decline to sign" campaign to keep the latter off the ballot.

For a proposed constitutional amendment to be placed on the November ballot, a group must gather at least 89,151 valid signatures of registered voters, or 10% of the votes cast for governor in the 2018 general election. Tuesday's primary election provides a prime opportunity for signature gathering ahead of the July 8 deadline.

Eddie Armstrong, chairman of Responsible Growth Arkansas, said the group is "putting manpower in the field" on election day to ensure the Arkansas Adult Use Cannabis Amendment petition gets enough signatures. The count is at about 53,000 so far, he said Wednesday.

Armstrong said the group expects to have well over 100 canvassers out and covering polling sites in the state's largest counties on election day.

"Our goal is to cover all bases from now until our deadline, but we're planning on election day being promising to us," he said. "We've got the state mapped out with every large-scale event."

The amendment would issue adult use cannabis cultivation and dispensary licenses to businesses that already hold licenses under the state's medical marijuana program, followed by an additional 40 licenses chosen by a lottery.

Most of the financial backing for Responsible Growth Arkansas comes from licensed cultivators. The group has raised $1.82 million and spent about $629,000 toward the effort, according to a report the group filed in April with the Arkansas Ethics Commission.

"We've already had great response to our canvassers across the state, but especially at the polls here in Pope County during early voting," Stiritz said.

The group declined to disclose how many signatures the petition had, though Stiritz said they looked forward to having the proposal on the ballot in the fall.

The group has raised more than $1.2 million toward the effort and spent about $914,000, according to a report filed May 13 with the Arkansas Ethics Commission. The primary financial backer is the Choctaw Nation of Oklahoma, which operates a casino near the state line in Pocola, Okla.

An effort to defeat the Fair Play for Arkansas amendment effort has rolled out mailers, digital ads and "voter educators" at the polls to urge people not to sign that petition. The Arkansas Tourism Alliance is co-chaired by David Couch, a Little Rock attorney who has been involved with several ballot initiative efforts, and former state Attorney General Dustin McDaniel.

The group had raised more than $1.1 million and had spent nearly $680,000 as of April 30, according to a report filed with the Ethics Commission. The bulk of the funding comes from Cherokee Nation Businesses, which received a license from the state to build a casino in Pope County.

He added that two laws the state passed in 2021 that prohibit paying petitioners by signature and hiring out-of-state residents to canvass have created a tougher environment for ballot initiatives and increased the cost of those efforts.

"People were prepared and ready to do other measures, but they were unwilling to take the risk this cycle," he said. "It's going to be a lot more expensive."

Couch said he expects to see more canvassing activity in 2024, a presidential election year, if a Legislature-sponsored proposal to create a constitutional amendment raising the threshold for citizen-initiated amendments and acts to pass to 60% of the vote fails.

A second effort to get recreational marijuana on the ballot will likely be pushed back to 2024.

The Arkansas Recreational Marijuana Amendment of 2022, a volunteer-driven effort backed by Arkansas True Grass, would not cap the number of cannabis businesses in the state and would automatically release people who are incarcerated solely because of a marijuana-related charge.

The group had gathered close to 40,000 signatures as of Wednesday, and spokeswoman Briana Boling said she would make a call on what to do by the end of the month.

"We haven't called it for sure yet but it's looking more and more like it," she said.

Arkansas True Grass has raised about $15,400 and spent more than $12,000 toward the effort, according to a report filed with the Ethics Commission in April.

Arkansans for World Class Education, which is backing a petition drive for the Public Schools Amendment of 2022, also will have canvassers out on election day, but because the group is mostly working with volunteers chairwoman Julia Taylor wasn't sure how many there would be.

Taylor said the group would release a statement about its progress toward the end of May. According to its ethics commission report, the group had raised more than $21,000 and spent about $2,000 as of April 30.

Another active petition effort is the Arkansas Medical Freedom Amendment, though sponsor Tanya Charlton said it was hard to know how many signatures had been gathered due to working with volunteers. The group had not filed any finance reports with the Arkansas Ethics Commission as of Friday.