Shop With a Cop ‘re-imagining’ eyed 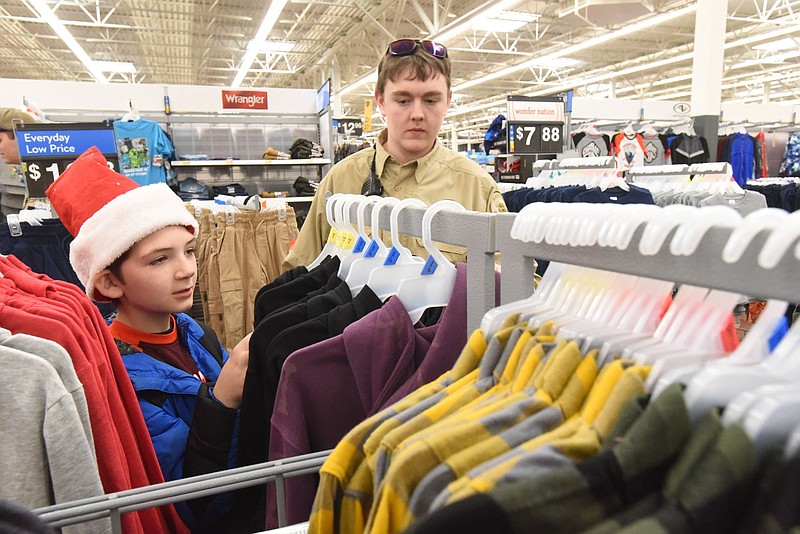 Devin Rust-Hagar, 10, picks out a sweatshirt while shopping with Deputy Jacob Dixon of the Benton County sheriff's office in this Dec. 7, 2021 file photo. (NWA Democrat-Gazette/Flip Putthoff)

Research funded by Walmart involves a "re-imagining" of Shop With a Cop programs that across the U.S. bring needy children into stores for shopping giveaways.

The Bentonville-based retail giant -- in a $210,000 sponsorship agreement with the University of Arkansas at Little Rock -- calls for researchers to develop "a program that replaces the current one-size-fits-all approach."

A Walmart spokesman in an email said the retailer remains committed to supporting Shop With a Cop.

"There are no plans to end our support of local law enforcement through Shop with a Cop programs -- we're looking for ways to enhance it," company spokesman Randy Hargrove said in an email.

The agreement describes perceived shortcomings of Shop With a Cop, as well as the company wanting a program that "empowers store-level funding decisions" to align with a "racial equity focus" that's part of Walmart's recently announced Shared Value Network on Criminal Justice.

Signed in January, the agreement describes how, after a pilot project, there could be a later, as-yet-unfunded "implementation" phase in which "the operations budget of the current Shop With A Cop program will be reinvested in the new program which will be executed nationally." Read the agreement here: arkansasonline.com/522ualrsra/

Hargrove said the UALR research project "will inform how we can best invest the resources we have by supporting an array of programs that fit local needs rather than a one-size-fits-all approach for different communities."

Walmart is supporting research at UALR's Center for Racial Justice and Criminal Justice Reform, a part of the university's W. H. Bowen School of Law.

The project's title is "Rebranding 'Shop With A Cop' as Walmart's 'Enhanced Community Policing Project,'" according to the research agreement between Walmart and UALR. The university released the document under the state's public disclosure law.

"In its current iteration, the 'Shop With A Cop' program may significantly impact individual family and officer pairings, but is not consistent with the transformative groundwater shift in racial equity the [Shared Value Network] seeks to achieve," states the agreement's "Statement of Work" introduction.

In June 2020, Walmart established what it calls its Shared Value Network on Criminal Justice, one of four similar programs that, according to the retailer's website, have "a particular focus on disparities affecting Black and African American people."

Each of the company's Shared Value Networks involves "teams of business leaders and associates working to use Walmart's business capabilities to advance equity," according to the company's website.

Some of the initiatives begun as part of the Shared Value Network on Criminal Justice include "second-chance hiring pilots" that provide employment to formerly incarcerated populations, wrote Marvin Carr, director of the Walmart.org Center for Racial Equity, in a letter posted on the company's website.

Walmart began the Shared Value Networks following the May murder of George Floyd, a Black man killed by police while handcuffed and lying face down on a Minneapolis street. Floyd's death led to street demonstrations against racism and police brutality across the U.S., including in Arkansas.

Four former Minneapolis Police Department officers have been convicted on criminal charges related to Floyd's treatment, including Derek Chauvin, who was founded guilty of murder, manslaughter and other charges after video showed him kneeling on Floyd's neck.

The research agreement refers to how Shop With a Cop "has not been closely monitored for the years that it has been in place."

But, over time, such shopping giveaway initiatives have become commonplace.

Far more than a single retailer participates in Shop With a Cop programs, and various nonprofit organizations as well as schools may be partners in such efforts.

"The idea came about during the early years of community policing (late 1980s) as a growing approach to crime prevention and response, and has continued in communities across the US in their efforts to engage with youth and families," Brenda Bond-Fortier, a professor of public administration at Suffolk University who has written about changes in urban policing, said in an email.

Shop With A Cop "embodies a public service mantra that seeks to address the needs of local youth and families," Bond-Fortier said, describing it as a "familiar strategy employed by police agencies and communities that value and prioritize police-community relationships."

Often, children or youth -- sometimes selected by schools -- receive gift cards to spend on items for themselves and their families while accompanied by a police officer.

Many communities highlight what are known as Walmart community grants of a few thousands dollars in describing their Shop With a Cop programs.

Among several Shop With a Cop programs in Arkansas, the Benton County Police Athletic League raises money for an effort with a focus on youth in Benton County.

"The Walmart Store Manager will typically cover 10% of our cost at the register for each of our Shop With A Cop dates," Carlee McCrary, a deputy with the Benton County sheriff's office, said in an email.

McCrary said about 80 kids participated in Shop With a Cop last year.

David M. Crawford, president of Fraternal Order of Police Lodge 25, which is based in Rogers, said the organization supports between 50-70 elementary school-age children for its shopping giveaway program.

"Walmart, specifically their store leadership teams, have been eager to partner with us on shopping days," Crawford said in an email, describing "a great working relationship at the local level."

Crawford said the police organization "would welcome" sharing "our best practices" with researchers.

The Springdale Police Department does its own fundraising for its Shop With a Cop program, said Capt. Jeff Taylor, a spokesman for the department.

Hargrove, with Walmart, said he did not have information about how much Walmart spends annually in support of Shop With a Cop programs, as "store managers have discretion on the programs they support benefiting local communities."

"We have not broken out the level of funding for those individual programs," Hargrove said.

Developing a new program will involve community outreach, according to a UALR law professor and co-director of the center overseeing the research.

andré douglas pond cummings, who forgoes capitalization in his name, in an email said that "community engagement will be a significant part of this project.

"We intend to hold community engagement events throughout the state that will bring community members and leaders together with law enforcement officers and officials to talk honestly about what is working and what is not in connection with community policing in Arkansas," he said in an email.

Babb described communication as key from the outset.

"Partnership between brands, nonprofits, and the community should start with a shared understanding of the social issue and a vision for the future," Babb said in an email. "The partnership should assess each organization's capabilities and resources to solve that problem, and a design to solve the social issue in a meaningful way."

The research agreement's timeline calls for the first year of the two-year project to involve collecting "best practices on community policing programs."

"Bowen Center researchers will evaluate opportunities from the current program by gathering a variety of data, including interviews of local law enforcement and store managers. Understanding the perspectives and experiences of participating constituencies will be crucial in defining what has been successful and what needs to change," the agreement states.

The agreement also refers to a November 2020 report from a task force on policing. Gov. Asa Hutchinson convened the group in June 2020.

The first year of the UALR research "will align with the recommendations" of the policing task force, the agreement states, noting that the task force recommended "that law enforcement work more diligently to increase trust within the communities that they work, particularly within communities of color."

Scott Hamilton, chief executive officer of the Urban League of the State of Arkansas, served on the task force.

Told of the research project, Hamilton said in an email that Walmart "can and should play a role in efforts to meet the objective of increased and improved community policing efforts."

"In my opinion, Walmart will want to act as a 'convener and supporter' of the citizens in communities keeping a lens towards fostering genuine and honest conversations," Hamilton said.

He added: "The citizens and line level law enforcement must talk. We must get the inaccuracies, predispositions, fears and trust issues on the table."

As a corporate entity, Walmart "will have to earn the trust and respect of citizens in this type of community building role," said Hamilton, whose organization runs youth development and education programs.

Hamilton said this "will take time" and that he would be open to helping, The Urban League or another community organization could be brought in to support the project, "as relationships and trust are a big part of meeting this objective," Hamilton said.

Hargrove said the goal of the research and also a planned pilot project "is to enhance how we collaborate with our law enforcement partners on community policing efforts to strengthen the communities we serve."

The research agreement -- signed by Larry Lundeen, a company vice president for global investigations -- refers to the center as providing "foundational support for re-imagining and rebranding Walmart's 'Shop With A Cop' program.'"

"The goal of the piloting phase is to select 2-3 law enforcement agency pairings, with at least one being in Northwest Arkansas," the research agreement states.

A third year, as yet unfunded, would involve approximately $300,000 for "a third program year committed to the national implementation phase."

Under the heading of "Project Planning," a paragraph on "Limitations" refers to the likelihood of pushback: "The primary limitation is that Shop With A Cop is a national program that has not been closely monitored for the years that it has been in place. Changes to the program may lead to some resistance."