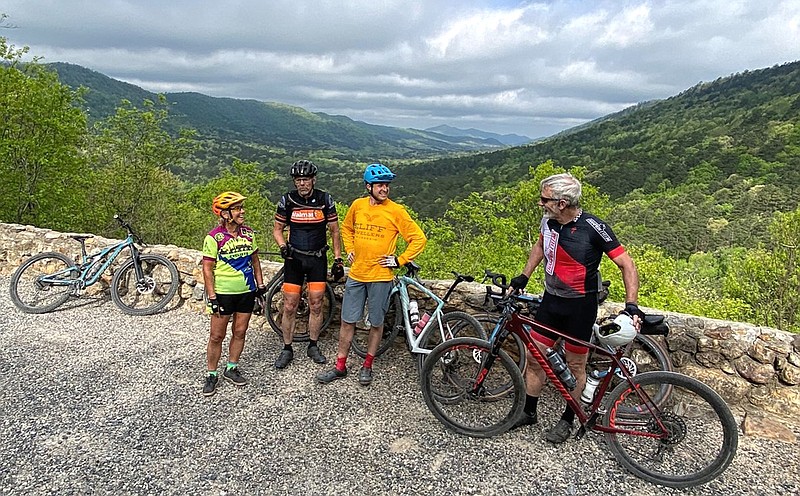 Dalene Ketcher (from left), Dan Giesse, Tom Hanna and David Hedges take in the scenery during a four-day gravel-grinding bike trip April 28-May 1 on the part of the Arkansas High Country Route that crosses the Ouachitas. (Special to the Democrat-Gazette/Bob Robinson)

Spring. Warm weather. More daylight. A distant voice began calling to me, "Come out and play."

I could think of no better way to answer than an extended bicycling trip.

I wasn't the only person hearing the call of the wild. I had no trouble recruiting five cycling buds to join me for an Arkansas High Country Route adventure.

The Arkansas High Country Route is a 1,172-mile bicycling course conceived by Arkansan Chuck Campbell. Composed of a mix of gravel and paved rural country roads, the route weaves through the Buffalo National River corridor and Arkansas River Valley, plus the mountainous Ozarks and Ouachitas.

The publication of Adventure Cycling Association's maps (adventurecycling.org) has helped make it a popular ride, attracting cyclists from across the nation. There is also an annual race over the route.

Scotti Lechuga crossed the finish line first in the 2021 competition (see arkansasonline.com/523bike). She completed the entire 1,172-mile route in five days, 10 hours, and 49 minutes. I, a mere mortal, had no delusions of attempting to ride anything close to the entire course on our four-day tour.

The Adventure Cycling map provided a wealth of information for planning our trip. The graphic layout of the region plots the route across the state with easy-to-follow, highlighted tracks. The map also includes a sidebar listing turn-by-turn directions, towns, camping, lodging, food, bike shops and other points of interest, helping riders to plan their campsites, food, rest areas and other needed stops.

Studying the map, I selected what I believed would be an engaging route coursing through the bucolic backcountry on the western boundaries of the Ouachita Mountains. I sought a route that favored gravel over pavement in an attempt to capture the true essence of rural Arkansas.

I was familiar with the region from past hikes on trails like Eagle Rock Loop, Caney Creek and the Ouachita National Recreation Trail. But experiencing it from the seat of a bicycle — that was a new adventure for me.

Weather draws us outdoors but is also one of the drawbacks of scheduling multiday activities in the spring. When we began monitoring the extended forecast, rain was predicted for most of our selected days. But as our launch date approached, the rain had been pushed out to only the final two days of the tour.

When our selected Thursday morning arrived, we loaded our gear and bikes onto Bill Hanna's van under clear skies. By the time we mounted our trusty steeds, the temperature had climbed to the mid-60s. Yes!

Speaking of "trusty steeds," most any type of bicycle works for gravel riding. Three members in our group rode purpose-built bikes, aka gravel grinders, which pretty much look like road bikes designed for long, all-day rides over rough roads. A couple of others had hardtail mountain bikes with narrower than normal tires. And another person rode a full-suspension mountain bike.

Each style of bicycle comes with its advantages and disadvantages on gravel. The gravel grinder bikes are generally faster; however, on rough surfaces, you sacrifice some control and comfort. Full suspension mountain bikes are heavy, therefore slower on climbs; but when screaming down a long, rough, gravel descent at more than 30 mph, riding on shocks and wide tires you'll be thinking, "Oh yeah."

We hauled down to Mount Ida, then followed Arkansas 379 for another 8 miles. When pavement turned to gravel, we unloaded the bikes.

Dalene Ketcher volunteered to take on the yeoman task of shuttle driver on this initial leg. We decided each person would take their turn at the wheel so everyone had the opportunity to experience the ride.

Adventure Cycling's hard-copy map was great for planning the route. Once the ride began, the online version we loaded into the app Bicycle Route Navigator proved more useful. All you have to do is follow a blue dot plotting your current location along the route. Be sure to select the "Use Offline Map" option in the app. This allows you to access the map even when there is no cellphone coverage — which is pretty much most of the ride.

From what I remember, the scenery was nice along the first leg of the ride. I was so pumped to finally be on my bike and underway, memory of the start is a blur.

About 20 miles in, I began to settle down and check out the scenery. We decided to sidetrack about a mile off-route to visit Little Missouri Falls. I had passed this beautiful formation years ago when backpacking Eagle Rock Loop and knew it was well worth pedaling a couple of miles out of the way.

The road terminated at a day-use area. We hiked across a bridge spanning the Little Missouri River to reach the falls. This gem of a waterfall is a spectacular site when the water is at the level it was that day. The stream of crystal-clear water cascades over four naturally polished rock ledges and then pours into a carved pool at the bottom. On a hot summer day, this would provide cyclists a refreshing escape from the heat.

The day-use area had pit toilets and picnic tables. Even though we were only 20 miles into the ride, a vote to make this our lunch area passed easily. David Hedges unpacked chicken salad and freshly baked cranberry bread for a well appreciated feast.

Hanna climbed behind the wheel after lunch, allowing Ketcher to take her turn on the bike. She rode a heavy, full suspension mountain bike, so climbs were not her friends. But on the descent, she blew past everyone, having way too much fun.

Although not on a schedule, as we approached 40 miles we began eyeing the bordering forest, seeking out our home for the night.

Albert Pike Recreation Area included campsites, but they have been shut down since floodwaters swept through the area in 2010.

We passed an abundance of potential boon-docking campsites, but nothing called out to us, until I turned down a side lollypop loop. It was away from the main road and bordered the banks of Blaylock Creek. Perfect.

The first thing I did was park my bike at a clearing five feet from the stream, staking out my home for the night. I was looking forward to drifting off to sleep with the soothing, burbling waters of the stream flowing over the rocky creek bed.

Circling the wagons, everyone leisurely began assembling their abodes. Then we gathered around the dancing flames of the campfire to sip adult beverages and recap the wondrous day.

Later, it was time for spaghetti with meatballs, followed by a hefty slice of the apple pie Dan Griesse had provided.

It was enlightening to have Hanna's son Tom on the tour. His Gen Z take on the subjects we shared around the campfire expressed views and opinions that boomers like me would not even have considered.

The second day of a multi-day ride is usually my favorite. Legs are loosened up but not tired, yet. I was now in the moment and fully aware of my surroundings.

Cascading streams bordered much of the day's early route. With the flowing waterway never being content to remain on one side of the road, we splashed through plenty of concrete-based low water crossings.

The route was punchy the first half of the day, with several short, steep climbs. Loose gravel and eroded cuts across the road added a degree of difficulty. Everyone was more than ready to stop for lunch at Pearls Cafe when we reached Hatfield. Good food, good service and great company.

Queen Wilhelmina State Park was our fuzzy goal for the day. Sixty-plus miles and some 6,000 feet of elevation gain. Ugh!

My only salvation was that it was my turn to drive the shuttle on the first section of the day. Even so, when I rolled into the state park after nearly 40 miles of riding and almost 4,000 feet of climbing, I was ready to climb down off that bike.

Although I had reserved campsites for the night, with the forecast at the park's mountaintop location calling for rain — accompanied by more than 20-mph winds — we held an emergency referendum and voted to book rooms at the lodge. This included a chance to enjoy the view from the lodge while dining in the restaurant. No one seemed in the mood for cooking outdoors.

We woke to discover the entire mountaintop engulfed in thick, moist cloud cover. Locals at the lodge calmed our safety concerns. They assured us that as soon as we dropped down the mountain, visibility would be clear.

Sporting light rain jackets, and with the van backdooring us with flashers ablaze, the group climbed on our bicycles to begin the day, coasting down Rich Mountain on a paved highway.

By the time we reached U.S. 270 some two miles later, we had dropped out of the clouds. Once more, we were back on gravel, peddling amongst the forest and past quaint homesteads. The group was happily chatting away like grade-schoolers at recess on the playground.

Midday, we pulled into a covered picnic area across from Bates First Baptist Church for yet another feast of chicken salad on cranberry bread, and fresh strawberries.

Life was good. We had settled into a routine. Everyone knew what needed doing, and we functioned as a family. That is, a family that gets along with one another.

Peddling away from Bates, thoughts were on the climb ahead. Hedges had ridden the climb up Poteau Mountain before, and even after the previous day's punishing climb to Queen Wilhelmina, he informed us our hardest climb was yet to come.

It was an 8-mile uphill, with 14% grades. Once again, it was the loose gravel that proved to be the real challenge. We had a short rest before beginning while the Hannas repaired a flat tire.

During the wait, a group of four-wheelers drove past. One of the drivers pointed to his vehicle, saying, "You do know you can buy one of these?" By the time I reached the mountain's crest, if a four-wheeler had driven past, I would have paid good money to grab onto the rollbar for a tow.

I don't believe anyone in the group made it to the top without losing traction and spinning out multiple times. On one of my spinouts, I could not get my cleat out of the pedal in time to keep from tumbling over. The only thing hurt was my pride. Luckily no one was around to see it.

Once everyone had crested the hill, we nabbed the first campsite we came across. Forty-plus miles with more than 3,000 feet of climbing, stick a fork in us, we were done.

The route pretty much followed Poteau Mountain ridge on our final day. A couple of speed bumps that sapped my tired legs, but no monster climbs.

We paused to visit an impressive granite monument to Joseph and Mollie McCutchen and a second one for Sen. Dale Bumpers.

The ridgetop offered several great picnic areas with vast views across the surrounding plains. We ended our trip at one of these inviting spots just short of U.S. 71.

It was another great adventure in The Natural State.

Print Headline: Call of the wild