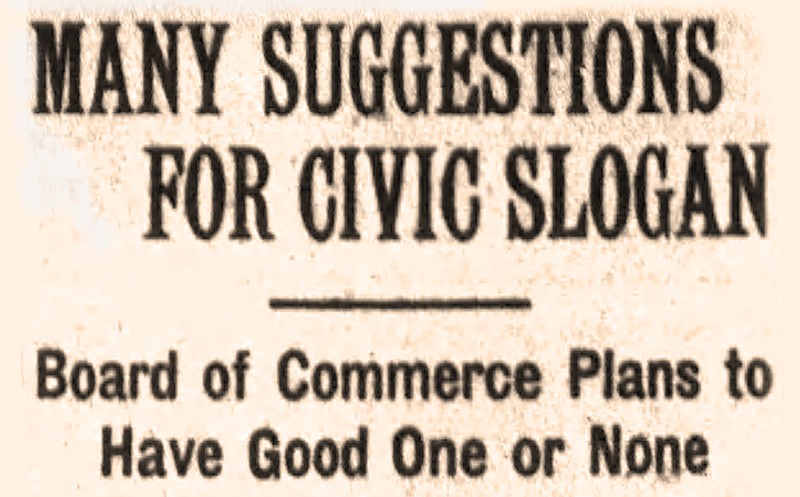 Headlines from the May 14, 1922, Arkansas Gazette. (Democrat-Gazette archives)

Slogans, slogans everywhere. We might imagine ourselves living in a golden age for slogans, if ad agencies and politickers weren't so busily churning out duds.

When companies come up with a slogan that sticks, like as not, unhappy customers are going to turn right around and rub that catchy catch phrase in their face, twisting it irony-wise to convey disdain.

So, I was mildly surprised to notice while perusing 100-year-old editions of the Arkansas Gazette, Arkansas Democrat and (for good measure) Little Rock Daily News last week that Arkansans in 1922 appear to have trusted slogans and admired them, very much.

In March 1922, at one of the weekly noon meetings of the Lions Club in Little Rock's Marion Hotel, speakers committee chairman J.J. Harrison gave a talk on "civic advertising." He urged the businessmen to adopt a slogan for Little Rock and then "commission each citizen as a press agent to advertise the city throughout the nation."

At the time, Little Rock still recalled its 19th-century nickname "City of Roses"; but a slogan was more than a nickname, it was something more like "Say It With Flowers." You know, inspiring. As the Gazette reported:

"He said many cities have become nationally known through the use of a simple advertising slogan."

What came next might have had something to do with the musical entertainment or the free cigars handed around by C.G. Brannon of the Brannon Drug Co.; but I suspect it had more to do with the lingering respectability of boosterism and the presence in the audience of Clare Briggs, "famous cartoonist of the New York Tribune." (See arkansasonline.com/13briggs.) The presence of a celebrity makes everything seem so worthwhile.

One board officer, R.E. Wait, also was president of the Little Rock Advertising Club. So, it makes sense that at its biweekly meeting in the Blue Dragon cafeteria the next week, the ad club formed a committee to come up with some slogans.

Two days after the admen met, the routine daily ad placed in the Gazette by the pharmacy Snodgrass & Bracy began: "OUR SLOGAN — Fresh candy." The drugstore already had an advertising slogan, "The Mail-Order Drug Store." So this was an in-joke.

On March 24, the Gazette editorial page urged that the contest judges be allowed to reject all submitted slogans if none of them worked:

"The plain truth is that many slogans are unhandy or far-fetched or even puerile. It is the exceptional case where a city finds a combination of words that represents genius and inspiration."

Good idea, the board replied.

But then April came and went with no mentions of the vaunted slogan contest. Meanwhile, slogans proliferated in ads and news reports:

Kidd-Bossinger Hardware (aka Kay-Bee) reminded readers that its slogan was "Keep Busy." Bentonville had a new slogan: "The Home of the Big Red Apple in the Land of a Million Smiles." And Arkansas Civitan delegates to a convention in Chattanooga, Tenn., would distribute 1,500 buttons bearing the slogan "I Want to Go to Arkansas in 1925." The Flappers Club at Ozark had a slogan: "Clean Morals, Clean Politics and a Clean Town."

Readers also learned that the governor of North Carolina had a "novel" slogan: "More Milk for North Carolina Babies." And other cities had slogans: St. Louis was "The City Surrounded by the United States"; "Nashville Offers Opportunity"; "Buffalo Means Business"; "St. Paul Serves"; "Dallas — Where Men Are Looking Forward"; and "Atlanta Always Ahead."

In the middle of May, the Gazette remembered there was a slogan contest with a $50 prize. How was that going? Board of Commerce manager John F. Surratt said that Wait had brought in a large number of suggestions but the contest wouldn't end until May 31.

The object, Surratt said, was not "the ordinary booster's attempt" to put a catch phrase about the city and state on the tongues of outsiders:

"They aren't the ones who are going to develop the state," he said, "and while it may flatter our local pride, the practical value of that kind of advertising amounts to nothing. Arkansas has got to be developed principally by its own people, and what we want is a phrase that will stir us up to realize our possibilities and keep pulling together."

On May 20, the slogan committee began — began — mailing letters to school superintendents and chambers of commerce announcing the slogan contest, which was still ending May 31. This letter recommended phrases on the order of "The Little Rock of Tomorrow" or "The Arkansas of Tomorrow."

On May 30, Wait announced that hundreds of slogans had poured in, including some mighty good ones. Entries closed at midnight May 31, followed by ... nothing, so far as I can find in the archives. It appears the committee asserted its right of refusal.

I read in the Oct. 13, 1922, Little Rock Daily News that the man who coined the slogan "Say It With Flowers" died in an automobile wreck in North Dakota. N.P. Lindberg was a florist and he came up with the powerful phrase during a floral convention.

The Daily News drew from this happenstance an odd moral: "It is chance, the sudden appearance of the unexpected, that shapes our destinies and makes life interesting. Never get discouraged. Chance probably has something better in store."

Sloganeering went on. On June 11, the Democrat facilitated a slogan contest for businesses along the recently paved Center Street. These businesses figured that their street would vault to the forefront of commerce with the completion of the Broadway Bridge then under construction. After all, Center already was known as a great place to park one's car.

To crystallize in the minds of the people the advantages of dealing with Center Street businesses, they offered $18 in cash prizes — $10 for first place, $5 for second and $3 for third — for a catchy slogan of no more than 10 words.

And unlike the board of commerce fiasco, this contest had winners: Thomas J. Doyle of 1715 State St. submitted "Every Day a Bargain Day on Center Street."

Frank Stewart, 1001 Cumberland St., won $5 for "Shop on Center Street, the Saving Center for Shoppers." And an out-of-towner, D.Y. Lindsey of Branch, earned $3 for "The A-B-C of Shopping — Always Buy on Center."

Honorable mentions included "Center on Center Street"; "Where Values Originate and Square Dealings Perdominate" (yes, that's Per-dominate); "Your Dollar Is Worth More in a Center Street Store"; "The Center Counts on Center" ...

And there were more, all of which goes to show that the best slogan for any sort of contest that hopes to engage a lot of participants was (and is) "Cash Prizes." 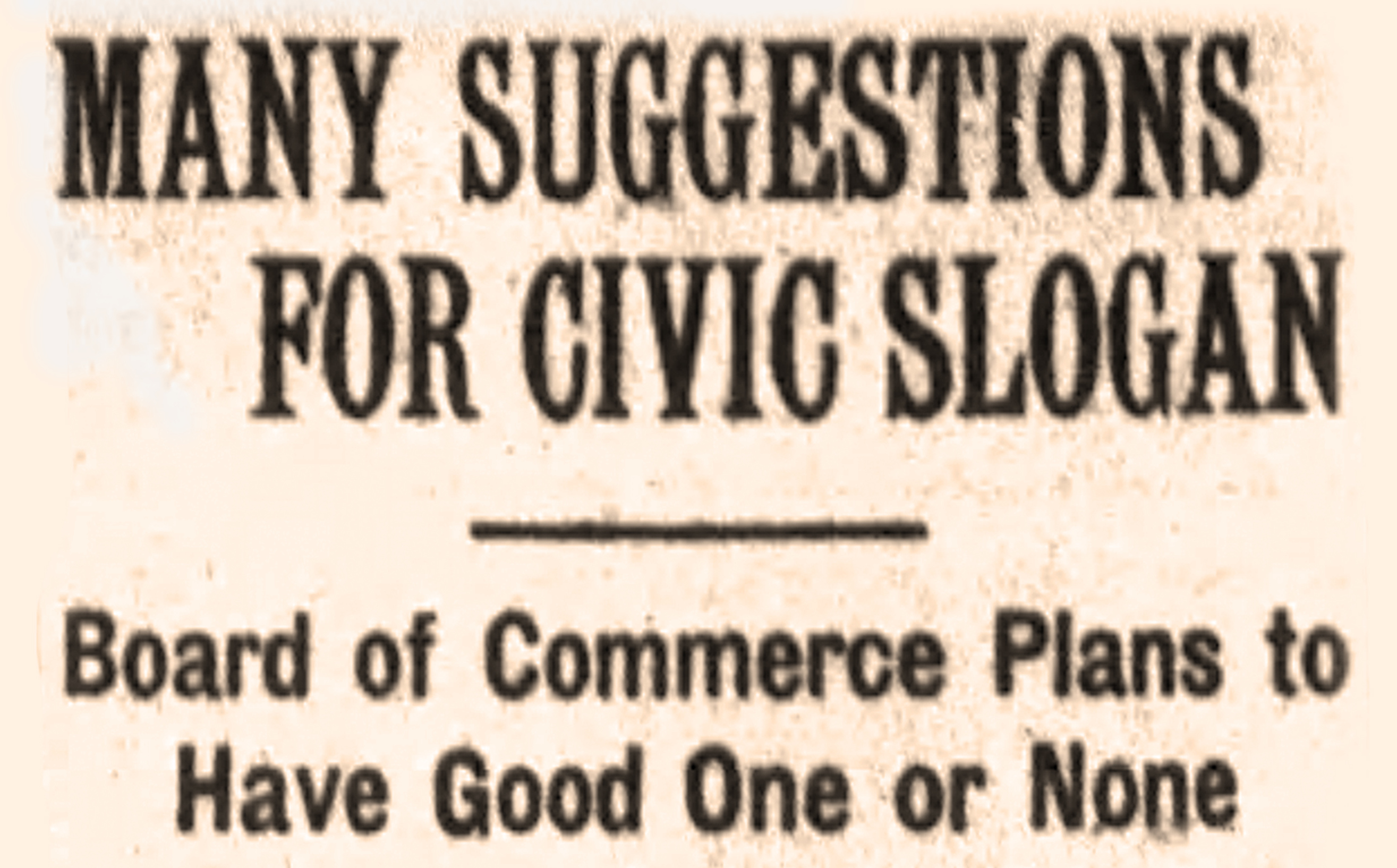 Headlines from the May 14, 1922, Arkansas Gazette. (Democrat-Gazette archives)