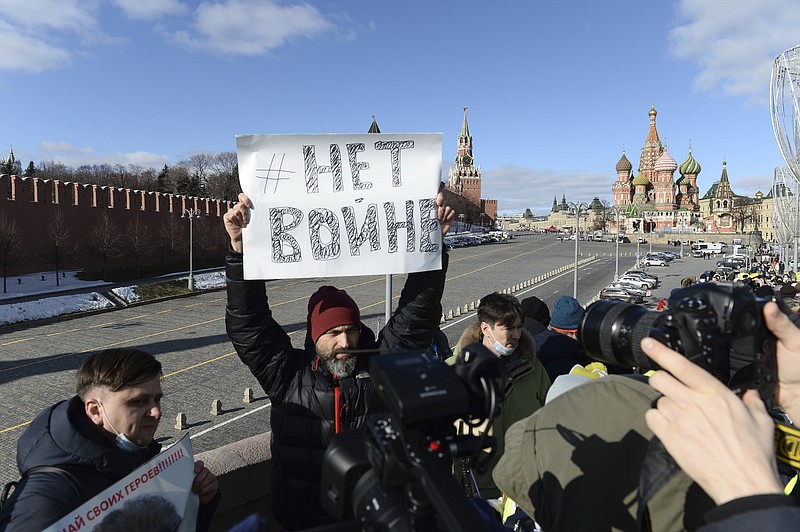 FILE - A man holds a poster with writing reading "No war" as people lay flowers near the site where Russian opposition leader Boris Nemtsov was gunned down, with the Kremlin Wall, left, the Spaskaya Tower, center, and St. Basil's in the background, in Moscow, Russia, Sunday, Feb. 27, 2022. (AP Photo, File)

Three months after the Feb. 24 invasion of Ukraine, many ordinary Russians are reeling from blows to their livelihoods and emotions. Moscow's shopping malls have turned into expanses of shuttered storefronts once occupied by Western retailers.

When President Vladimir Putin announced the invasion, war seemed far away from Russian territory. Yet within days the conflict came home -- not with cruise missiles and mortars but in the form of volleys of sanctions by Western governments and economic punishment by corporations.

McDonald's -- whose opening in Russia in 1990 was a cultural phenomenon -- pulled out of Russia entirely in response to its invasion of Ukraine. IKEA suspended operations. Tens of thousands of once-secure jobs are now in question in a very short time.

Major industrial players including oil giants BP and Shell and automaker Renault walked away, despite their huge investments in Russia. Shell estimated it will lose about $5 billion by trying to unload its Russian assets.

While the multinationals were leaving, thousands of Russians who had the economic means to do so were also fleeing, frightened by harsh new government moves connected to the war that they saw as a plunge into full totalitarianism.

Some young men may have also fled in fear that the Kremlin would impose a mandatory draft to feed its war machine. But fleeing had become much harder than it once was -- the European Union's 27 nations, along with the United States and Canada, had banned flights to and from Russia.

The Estonian capital of Tallinn, once an easy weekend destination 90 minutes by air from Moscow, suddenly took at least 12 hours to reach on a route through Istanbul.

Even vicarious travel via the internet and social media has narrowed for Russians. Russia in March banned Facebook and Instagram -- although that can be circumvented by using virtual private networks -- and shut access to foreign media websites, including the BBC, the U.S. government-funded Voice of America and Radio Free Europe/Radio Liberty, and the German broadcaster Deutsche Welle.

After Russian authorities passed a law calling for up to 15 years' imprisonment for stories that include "fake news" about the war, many significant independent news media shut down or suspended operations. Those included the Ekho Moskvy radio station and Novaya Gazeta, the newspaper whose editor, Dmitry Muratov, shared the most recent Nobel Peace Prize.

The psychological cost of the repressions, restrictions and shrinking opportunities could be high on ordinary Russians, although difficult to measure. Although some public opinion polls in Russia suggest support for the Ukraine war is strong, the results are likely skewed by respondents who stay silent, wary of expressing their genuine views.

Andrei Kolesnikov of the Carnegie Moscow Center wrote in a commentary that Russian society right now is gripped by an "aggressive submission" and that the degradation of social ties could accelerate.

"The discussion gets broader and broader. You can call your compatriot -- a fellow citizen, but one who happens to have a different opinion -- a 'traitor' and consider them an inferior kind of person. You can, like the most senior state officials, speculate freely and quite calmly on the prospects of nuclear war. [That's] something that was certainly never permitted in Soviet times during Pax Atomica, when the two sides understood that the ensuing damage was completely unthinkable," he wrote.

"Now that understanding is waning, and that is yet another sign of the anthropological disaster Russia is facing," he said.

The economic consequences have yet to fully play out.

In the early days of the war, the Russian ruble lost half its value. But government efforts to shore it up have actually raised its value to higher than its level before the invasion.

"We see deterioration in the economy now across a broad range of sectors. Companies are warning that they're running out of inventories of spare parts," Weafer told The Associated Press. "A lot of companies put their workers on part time work and others are warning to them they have to shut down entirely. So there's a real fear that unemployment will rise during the summer months, that there will be a big drop in consumption and retail sales and investment."

The comparatively strong ruble, however heartening it may seem, also poses problems for the national budget, Weafer said.

"They receive their revenue effectively in its foreign currency from the exporters and their payments are in rubles. So the stronger the ruble, then it means the less money that they actually have to spend," he said. "[That] also makes Russian exporters less competitive, because they're more expensive on the world stage."

If the war drags on, more companies could exit Russia. Weafer suggested that those companies who have only suspended operations might resume them if a cease-fire and peace deal for Ukraine are reached, but he said the window for this could be closing.

"If you walk around shopping malls in Moscow, you can see that many of the fashion stores, Western business groups, have simply pulled down the shutters. Their shelves are still full, the lights are still on. They're simply just not open. So they haven't pulled out yet. They're waiting to see what happens next," he explained.

Those companies will soon be pressed to resolve the limbo that their Russian businesses are in, Weafer said.

"We are now getting to the stage where companies are starting to run out of time, or maybe run out of patience," he said. 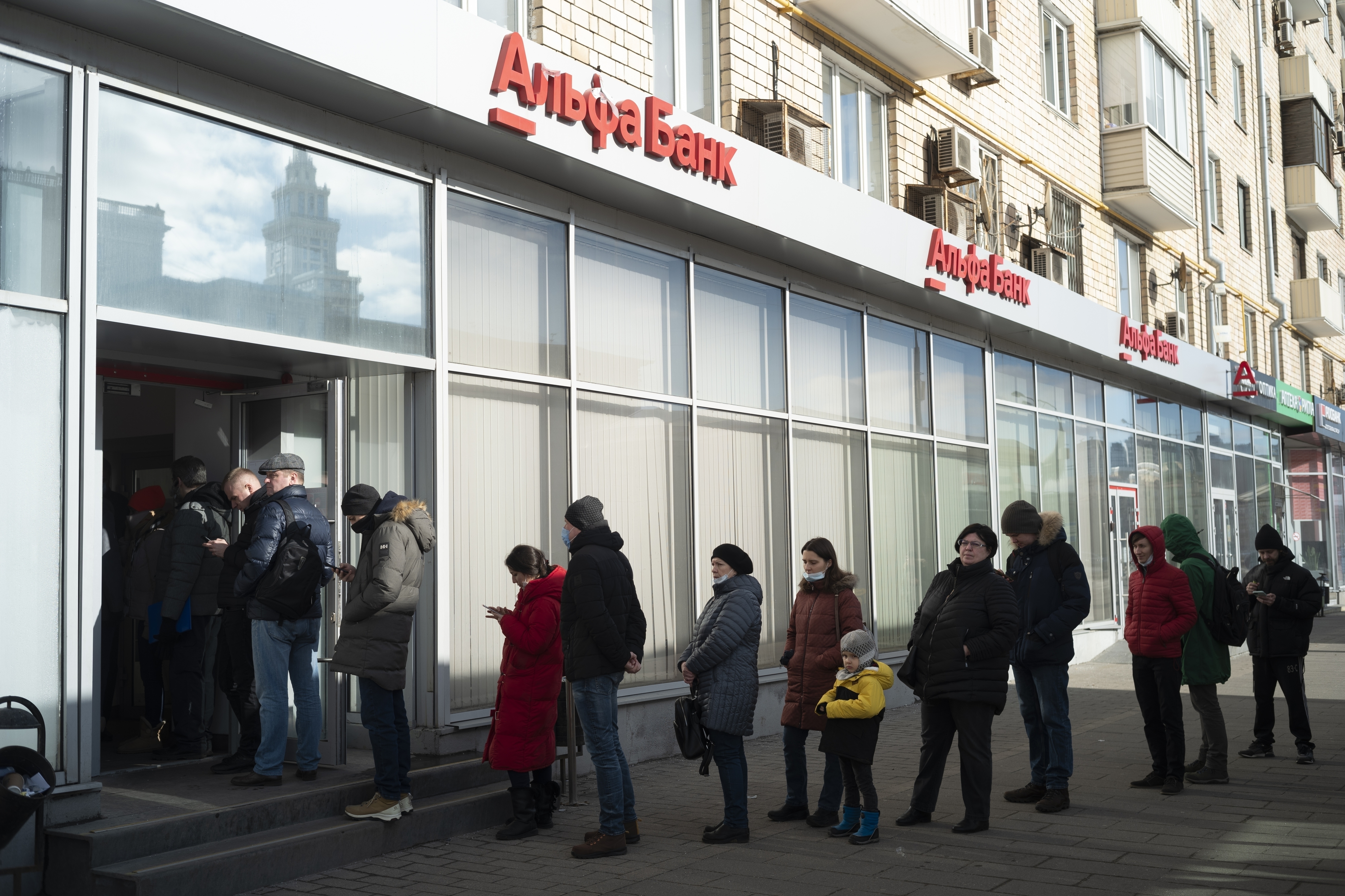 FILE - People stand in line to withdraw money from an ATM of Alfa Bank in Moscow, Russia, Sunday, Feb. 27, 2022. Russians flocked to banks and ATMs shortly after Russia launched an attack on Ukraine on Feb. 24 and the West announced crippling sanctions. (AP Photo, File) 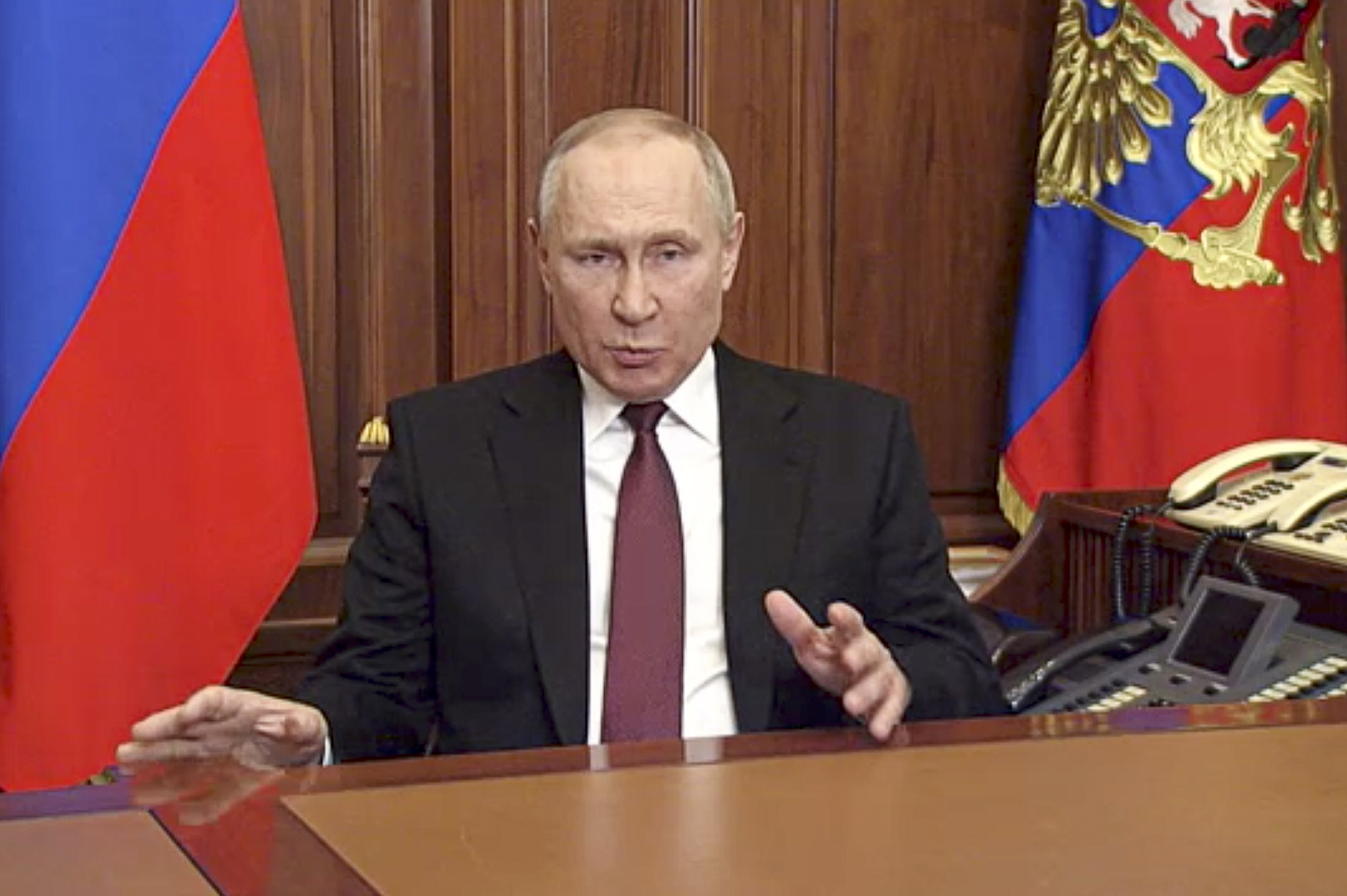 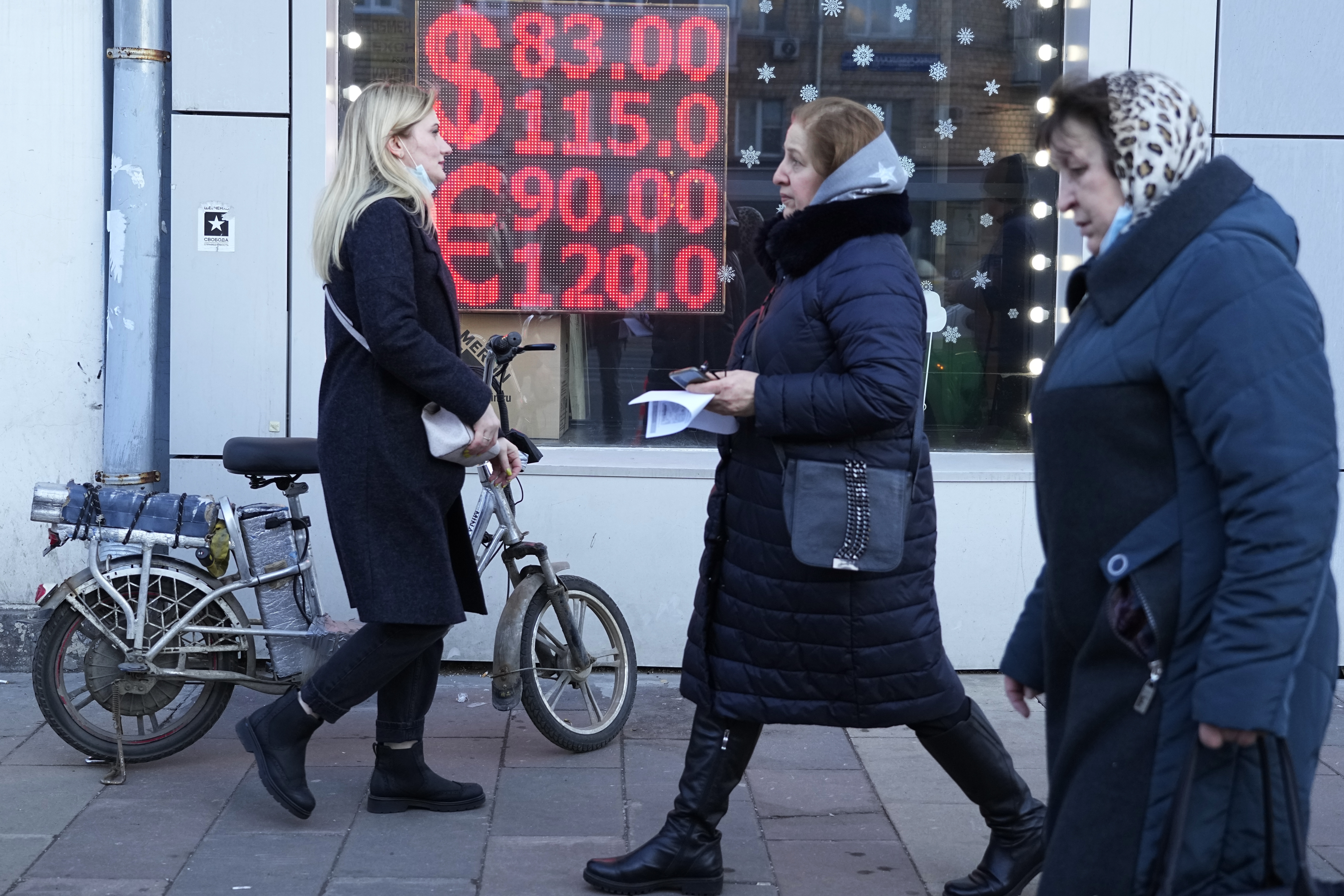 FILE - People walk past a currency exchange office screen displaying the exchange rates of U.S. Dollar and Euro to Russian Rubles in Moscow's downtown, Russia, Feb. 28, 2022. Ordinary Russians are facing the prospect of higher prices as Western sanctions over the invasion of Ukraine sent the ruble plummeting. That's led uneasy people to line up at banks and ATMs on Monday in a country that has seen more than one currency disaster in the post-Soviet era. (AP Photo, File) 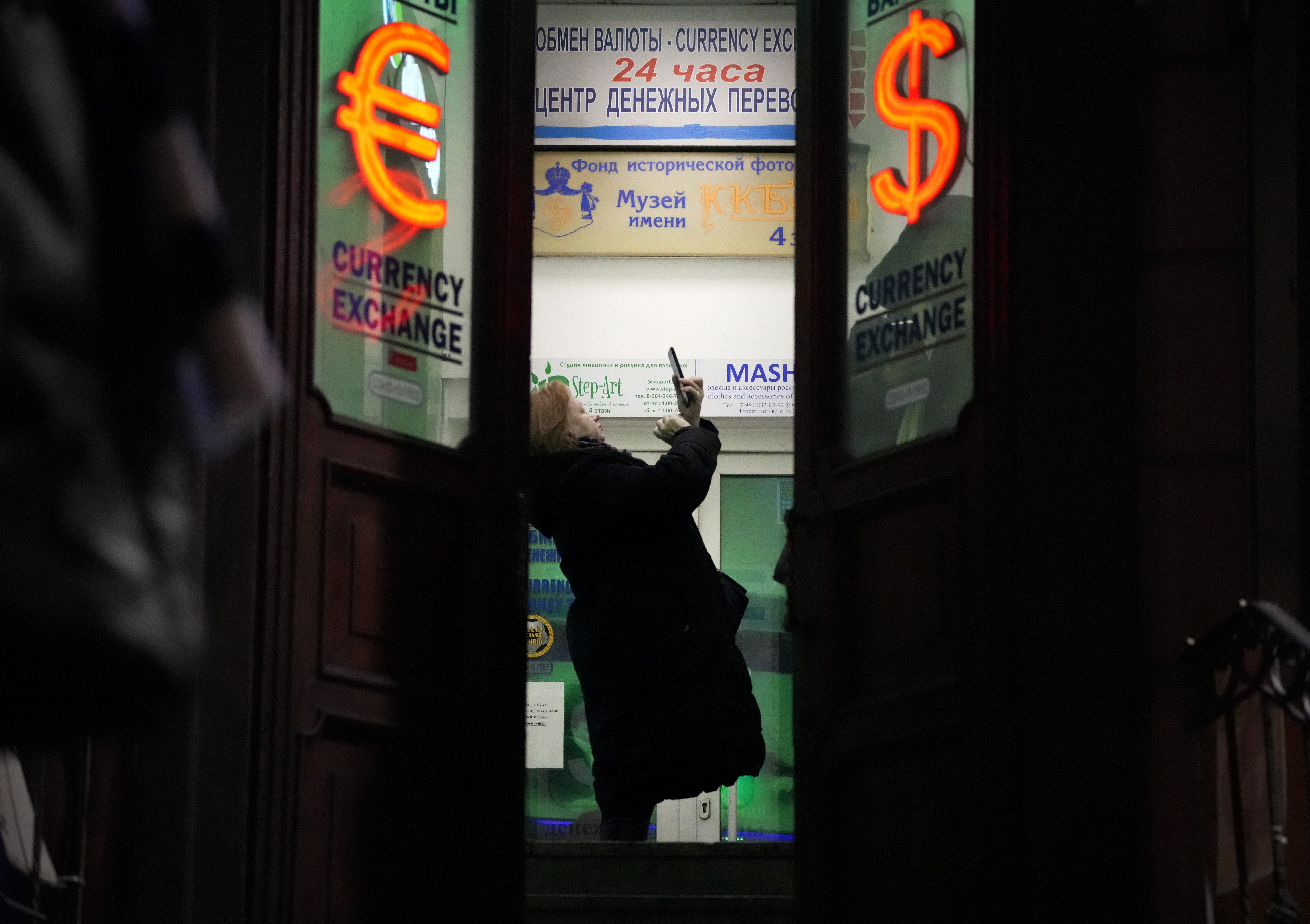 FILE - A woman stands in a currency exchange office in St. Petersburg, Russia, Friday, Feb. 25, 2022. Russians flocked to banks and ATMs on Thursday and Friday shortly after Russia launched an attack on Ukraine and the West announced crippling sanctions. According to Russia's Central Bank, on Thursday alone Russians have withdrawn 111 billion rubles (about $1.3 billion) in cash. (AP Photo, File) 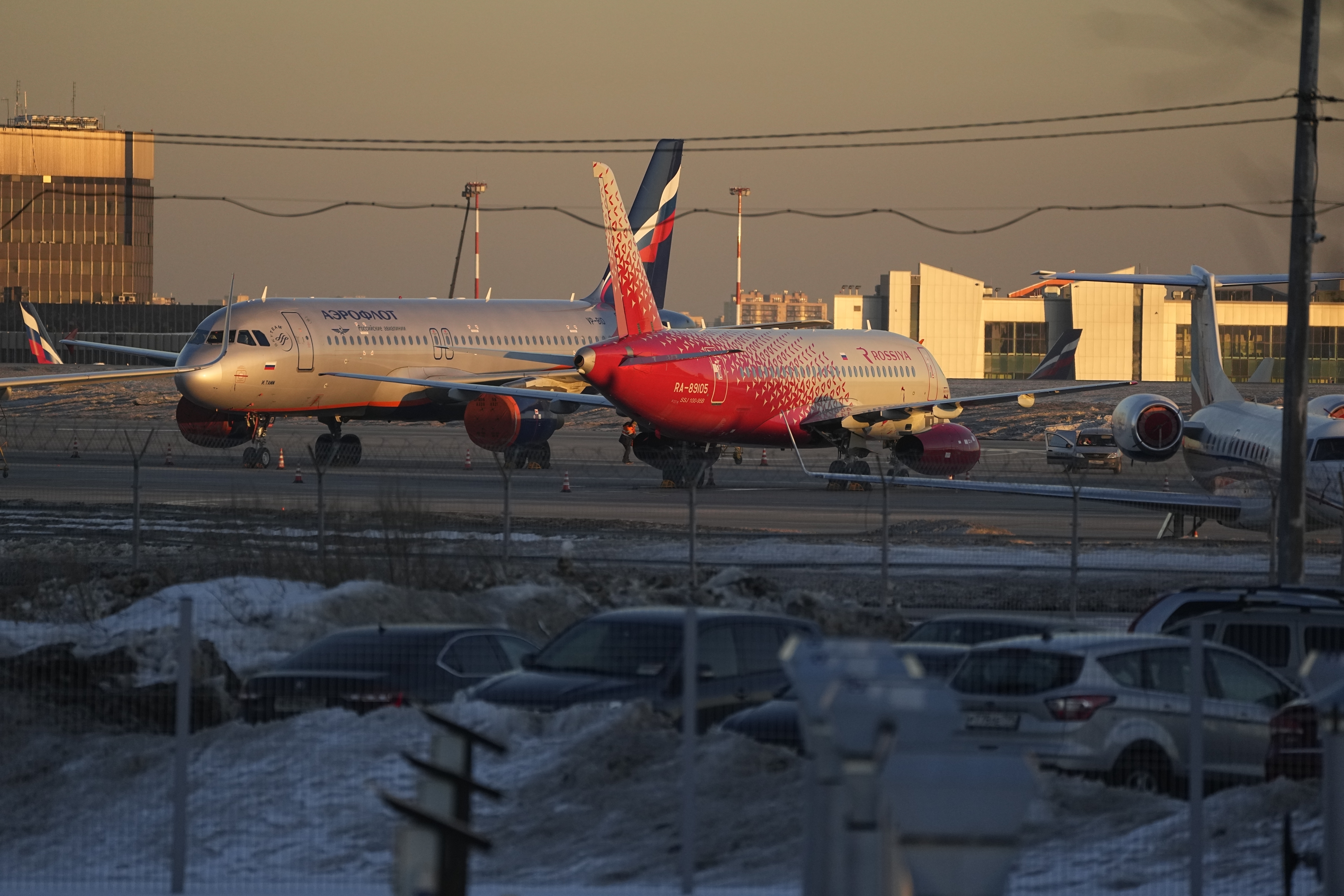 FILE - Aeroflot's passengers planes are parked at Sheremetyevo airport, outside Moscow, Russia, Tuesday, March 1, 2022. Fleeing had become much harder than it once was — the European Union's 27 nations, along with the United States and Canada had banned flights to and from Russia. (AP Photo, File) 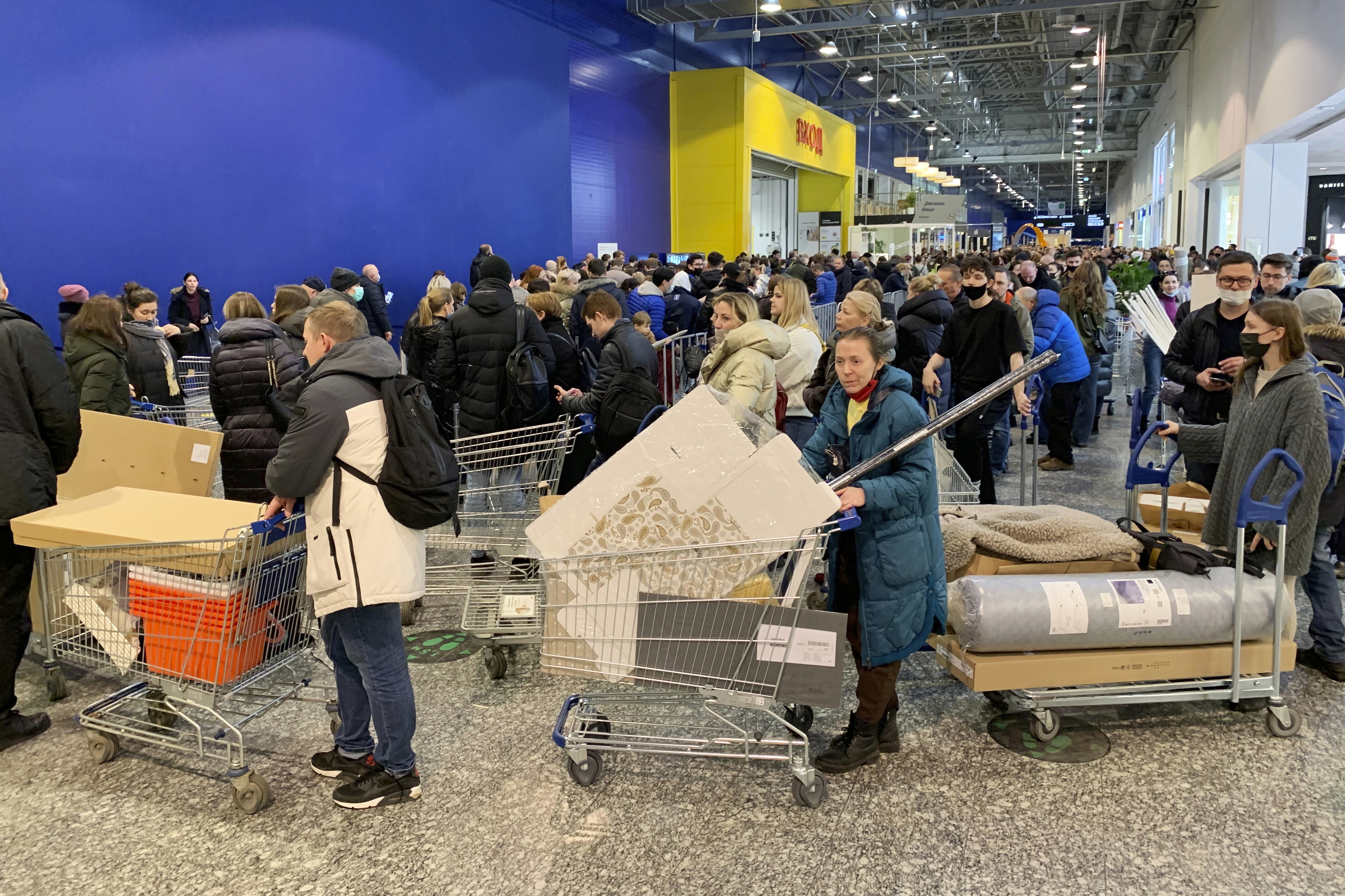 FILE - People wait in a line to pay for her purchases at the IKEA store on the outskirts of Moscow, Russia, Thursday, March 3, 2022. IKEA, the epitome of affordable modern comforts, suspended operations. Tens of thousands of once-secure jobs are now suddenly in question in a very short time. (AP Photo, File) 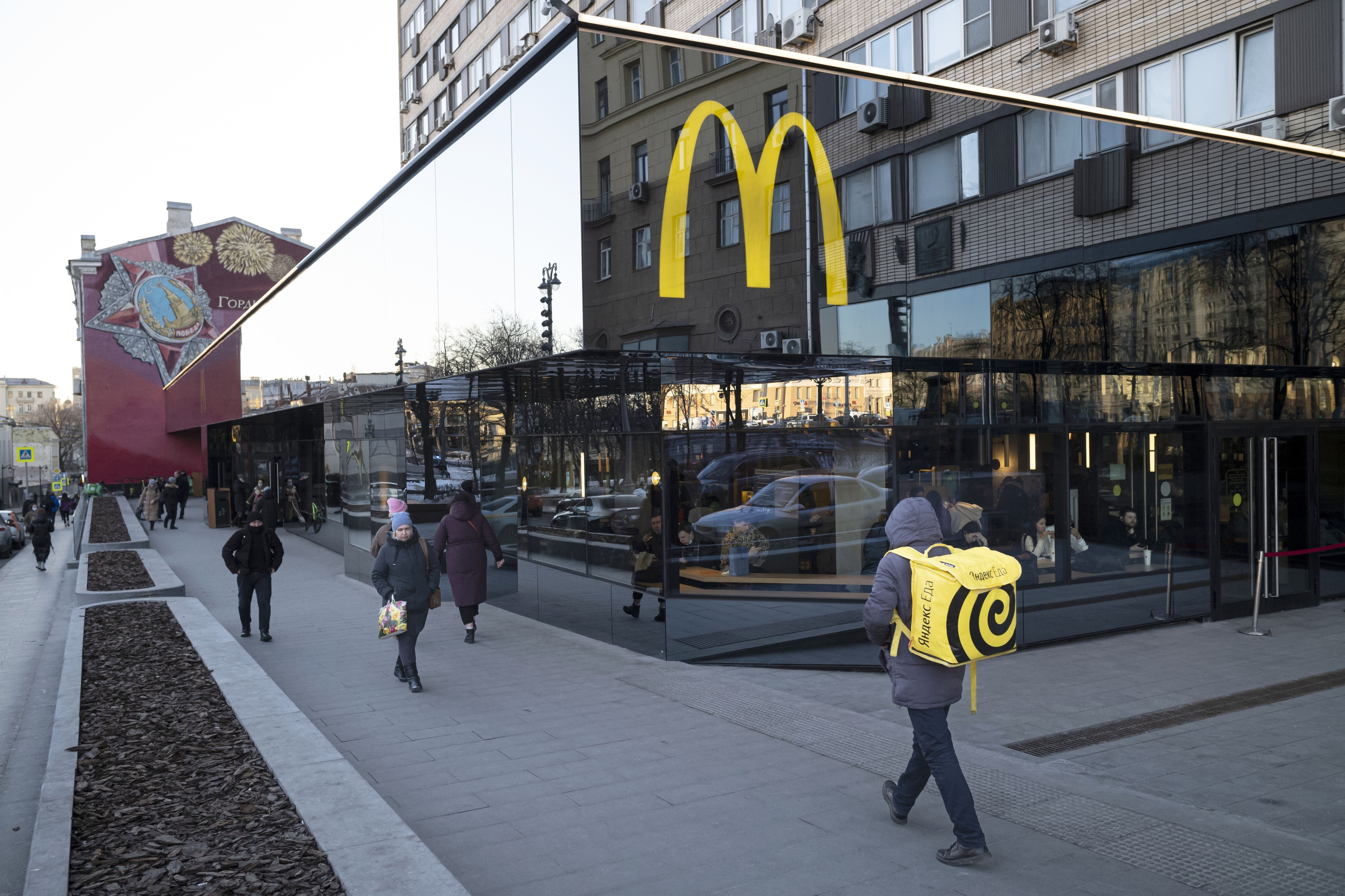 FILE - People walk past a McDonald's restaurant in the main street in Moscow, Russia, Wednesday, March 9, 2022. McDonald's — whose opening in Russia in 1990 was a cultural phenomenon, a shiny modern convenience coming to a dreary country ground down by limited choices — pulled out of Russia entirely in response to its invasion of Ukraine. (AP Photo, File) 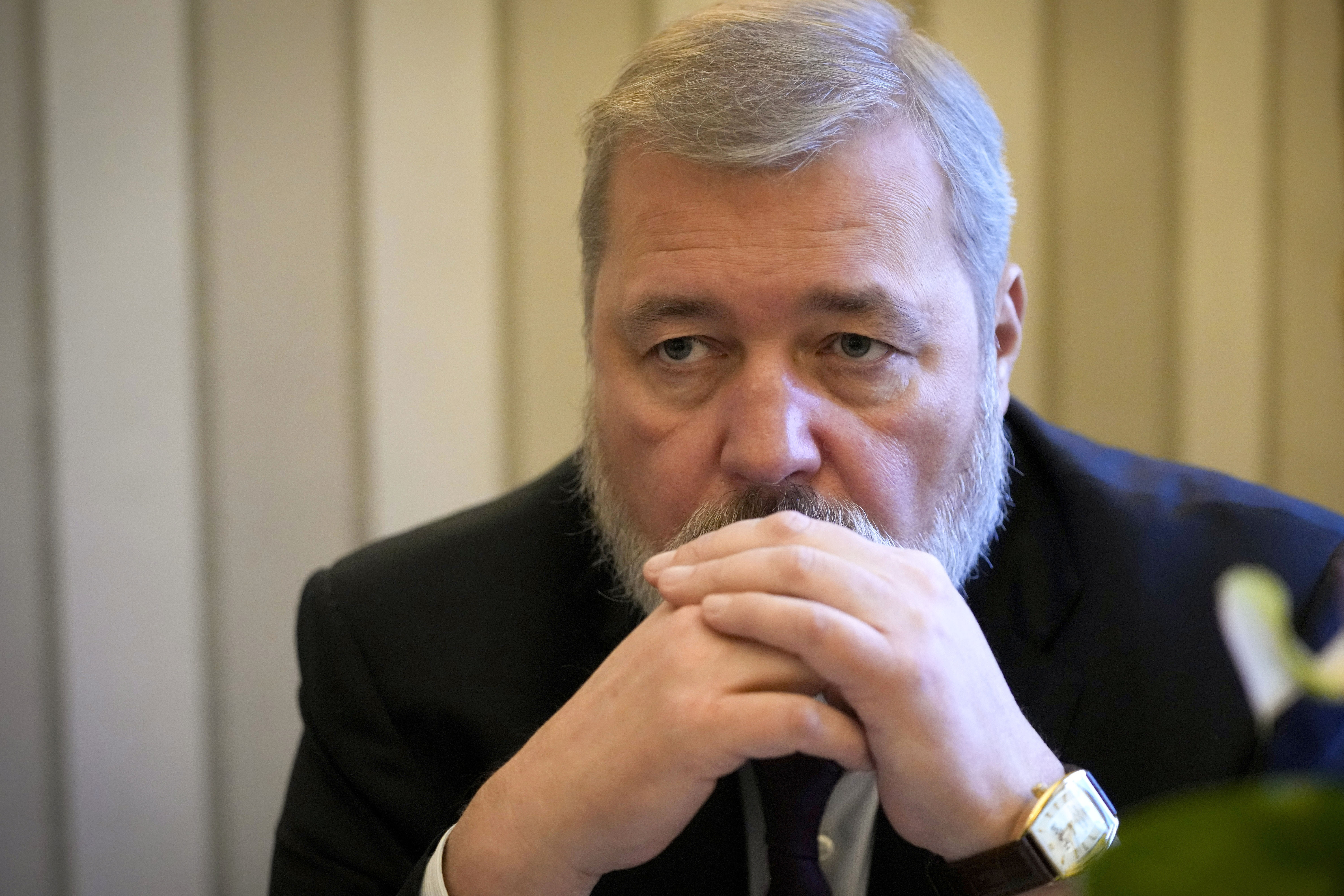 FILE - Nobel Peace Prize winner Dmitry Muratov from Russia poses for a photo as he works on his speech at his room in The Grand Hotel in Oslo, Norway Thursday, Dec. 9, 2021. After Russian authorities passed a law calling for up to 15 years' imprisonment for stories that include "fake news" about the war, many significant independent news media shut down or suspended operations. Those included the Ekho Moskvy radio station and Novaya Gazeta, the newspaper whose editor Dmitry Muratov shared the most recent Nobel Peace Prize. (AP Photo/Alexander Zemlianichenko, File) 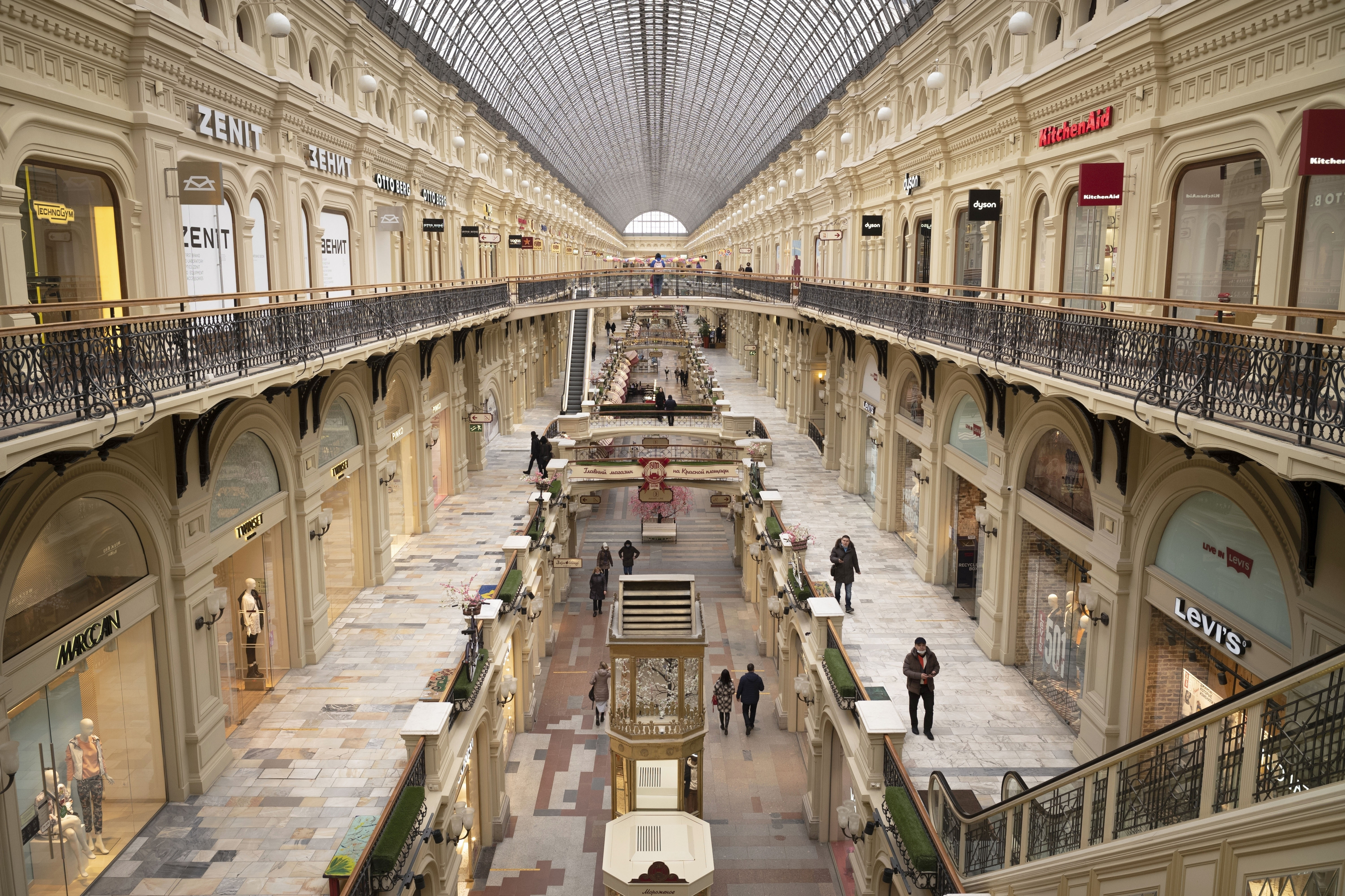 FILE - Few visitors walk inside the GUM department store in Moscow, in Moscow, Russia, Friday, March 4, 2022. Three months after the Feb. 24 invasion, many ordinary Russians are reeling from those blows to their livelihoods and emotions. Moscow's vast shopping malls have turned into eerie expanses of shuttered storefronts once occupied by Western retailers. (AP Photo, File)