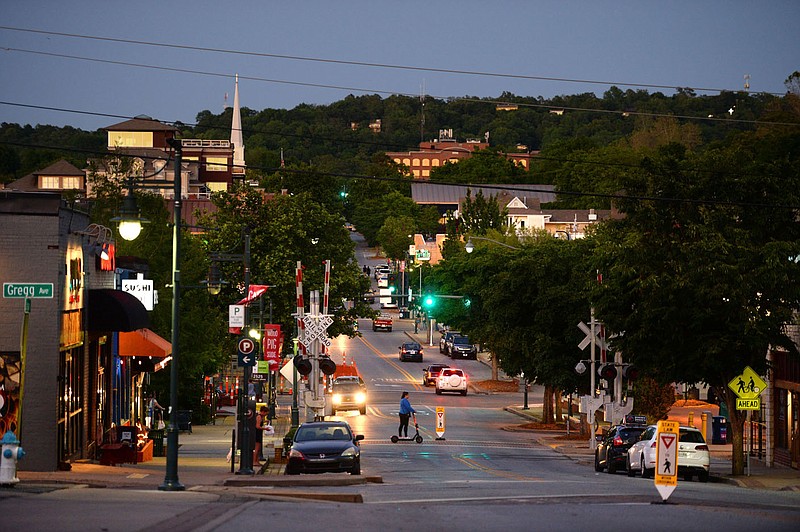 Dickson Street near Gregg Avenue is seen Friday, May 29, 2020, in Fayetteville. The city's Advertising and Promotion Commission on Monday agreed to create a director of downtown initiatives position. (File photo/NWA Democrat-Gazette/Andy Shupe)

FAYETTEVILLE -- A new staff position with the city's tourism bureau will serve as a champion for downtown, Advertising and Promotion Commission members heard Monday.

The commission authorized the creation of a director of downtown initiatives position and allocated $100,000 from its budget toward the effort.

The person hired will begin as an employee of the city's tourism bureau, Experience Fayetteville, and help formalize a downtown organization, said Molly Rawn, the bureau's chief executive officer. The person eventually would transition employment from Experience Fayetteville to the downtown organization and report to its board of directors, she said.

Rawn likened the process to how the Creative Arkansas Community Hub and Exchange started with a full-time position at the Northwest Arkansas Council and eventually became a standalone nonprofit organization. Experience Fayetteville will pay for the position in the first year and would renew it in the second and third years with financial support from the city, according to Rawn's proposal. By the end of year three, the director of downtown initiatives would become an employee of the downtown organization.

About 18 months ago, members of the Dickson Street Merchants Association decided to expand the scope of the organization, said Todd Martin, owner of Southern Food Co., East Side Grill and Theo's restaurants. The group now goes by the Downtown Fayetteville Coalition and has a transitional board that Martin is a part of.

The Downtown Fayetteville Coalition is a group of volunteers. Rawn said the person hired as director of downtown initiatives will help formalize an organization like what other cities such as Springdale, Rogers and Bentonville have.

“We are certainly one of the only cities in the first class in the state of Arkansas that does not have one, and it’s time. It’s past time,” she said. “We have an opportunity to really take a leadership role in this by committing funds to hiring this person.”

Rawn said conversations with city officials surrounding the city's lack of a downtown association started soon after the commission hired her in 2016. She said the proposal has the backing of the city's administration, but any allocation of money from the city government would have to come from a vote of the City Council.

"If we are several months into this and we don't have other key partners and our city hasn't seen value, we shouldn't want to continue to fund it," Rawn said.

Mark Kinion and Sarah Bunch, members of the City Council who sit on the commission, supported the initiative.

A previous downtown association, Fayetteville Downtown Partners, folded in 2009, citing a lack of staff and a recessionary economy. Before then, it was known as the Downtown Dickson Enhancement Project, which raised money and contributed to a number of streetscape improvements in the entertainment district.

Steve Clark, president of the city's Chamber of Commerce, said a lot has changed since the last attempt at creating a downtown organization. The city and region is growing at an exponential rate, and the people moving in have certain expectations about what a downtown should provide. Conversely, businesses need help to meet those changing expectations, he said.

"You can't have too many people pulling on the rope," Clark said.

Brian Crowne, owner of George's Majestic Lounge, said the move presents an opportunity to get buy-in from a variety of voices with interest in the future of the city's downtown. The city is in the middle of building out a $31.6 million bond issue to create an arts corridor downtown with a new parking deck. The director of downtown initiatives will help coordinate a vision and a proactive approach to everything from programming to parking, he said.