Imani Perry to discuss ‘South to America’ at library series 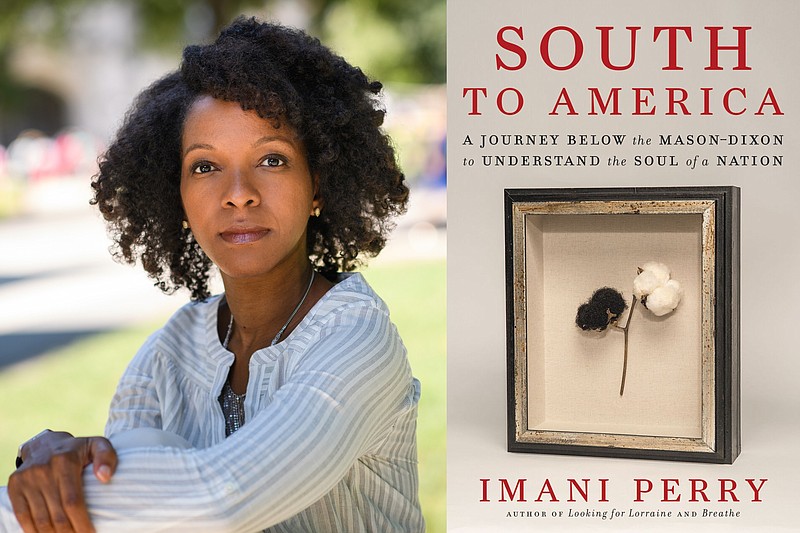 Imani Perry, author of “South to America: A Journey Below the Mason Dixon to Understand the Soul of a Nation,” will speak Thursday as part of the CALS Speaker Series. (Special to the Democrat-Gazette/Sameer Khan)

Perry, the Hughes-Rogers Professor of African American Studies at Princeton University, will discuss her book, "South to America: A Journey Below the Mason Dixon to Understand the Soul of a Nation."

"South to America," which was published Jan. 25, digs deeply into the South's fecund soil, as Perry elegantly weaves stories — historical and personal — in a search for a better understanding of the region; its legacy of slavery, racial violence, injustice and Jim Crow; its myriad contradictions and its undeniable influence on the rest of the country and beyond.

The book is inspired by the writing of James Baldwin, V.S. Naipul's "A Turn in the South" from 1989 and Albert Murray's gonzo 1972 memoir-travelogue-critique "South to a Very Old Place." Perry, 49, roams through Appalachia; Birmingham, Ala.; Miami; Savannah, Ga,; Nashville, Tenn.; and places in between, returning with stories, reflections, criticisms and observations, often passing by the more trod-upon histories and characters for those not so well known.

Perry, who also teaches gender and sexuality studies; law and public affairs; and jazz studies at Princeton, is a native of Birmingham. She grew up in Cambridge, Mass., and Chicago and lives in Philadelphia. Her other books are "Breathe: A Letter to My Sons," "Vexy Thing: On Gender and Liberation" and "May Forever We Stand: A History of the Black National Anthem."

We spoke with her last week about "South to America," what she hopes readers will take from the book and how she still considers Birmingham her home.

This interview has been edited for clarity and length.

Will this be your first trip to Arkansas?

It will be the first in a long time. I was there maybe 10 years ago. Part of the reason I don't have an Arkansas section [in the book] was because I couldn't get back to Arkansas due to covid, and I felt like I didn't have enough of a grasp on the state to write about it.

And that takes care of my next question.

When did you first start thinking of writing this book?

I've been thinking about it in one way or another for almost my whole life. I've been going back and forth from home, which is Alabama, for the majority of my life, and also traveling to other parts of the South to visit family and friends. I've been aware, even as a child, the gap between how it was described and how I experienced it.

I've written bits and pieces over the years. I just spoke to one of my best friends from high school who said 'I remember you writing poems about Alabama in high school.' Once I got to a place as a writer where I had more freedom to write what I wanted, this is what came to me.

Even though you didn't grow up there, you say in the book that Alabama is home.

Absolutely. Your home is where your people are and where the people love you unconditionally and the place you can return to. I don't come from a family that migrated north. My kids were born in the north ... but just as people who immigrate here from other countries might consider the place they were born home, for me Alabama is home.

In many of the places you visited, you sidestepped the more well-known stories and histories for more intimate and local details. You also report your encounters with docents and drivers and cashiers and other everyday people you met. Did you set out to do that or did these just happen?

I just sort of allowed myself to encounter places and stories will come up. Southerners will talk to you, and the way the stories came up, I wanted to put them to the reader as a way of understanding that this is a tapestry that is much richer than you might think it is.

There's a lot of gorgeous work about the monuments and historic sites, but whatever history or dynamic I was telling, I wanted people to be able to reach it through story and intimate encounters. Those things happened spontaneously, but it's also what it means to be human, you encounter all kinds of folks.

I think Southerners sometimes conceive of themselves as less complex and diverse than we actually are. That was part of the intention, to go off the beaten track.

From a purely technical perspective, I love how you transition from subjects so seamlessly. You'll be writing about the Lorraine Motel in Memphis and in the very next paragraph you've moved on to Pat Boone's sanitized covers of Little Richard songs, and it's all of a piece.

I'm really taken by quilting. Formally speaking, that's the subtext of the book, quilts. When you see a really beautiful quilt — scrap quilts in particular — you notice that the colors often wind up being deliberate even if it doesn't look deliberate. I'm not good at quilting, but I was trying to think aesthetically, how do you create a quilt in a literary context? I tried to pull it all together, so I really appreciate the compliment because it was hard to try to do [laughs].

What are your plans for the program here? Will you read from the book?

I tend to try to speak to the place that I go. I'm not going to read from the book, but I am going to talk a little bit about a visit the poet Derek Walcott made to Fayetteville, and I want to talk about what I think the South, including Arkansas, has to offer to the nation in this moment. And I'm going to ask a lot of questions. Everywhere I go, I learn more and I'm eager to hear what folks from Arkansas have to share with me.