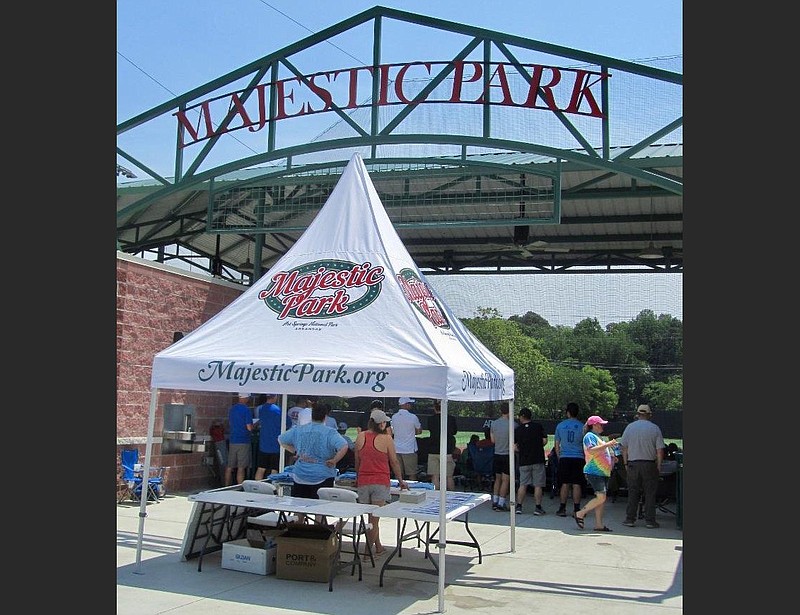 Majestic Park is billed as the place “where baseball’s past meets baseball’s future.” (Special to the Democrat-Gazette/Marcia Schnedler)

HOT SPRINGS — Baseball, a Hot Springs hallmark since the 1880s, is the theme of a handsome new Spa City attraction for players, their fans and other interested visitors.

The five-field Majestic Park complex, hosting baseball for youth league teams and older players, has opened on the site where Babe Ruth took part in nine spring trainings with the Boston Red Sox and New York Yankees in the early 20th century.

In 2019, Spa City voters authorized the issuing of up to $8.5 million in bonds on behalf of the Hot Springs Advertising and Promotion Commission to build the complex. The bonds are being repaid from the existing 3% hospitality tax. The Oaklawn Foundation added a $500,000 grant. 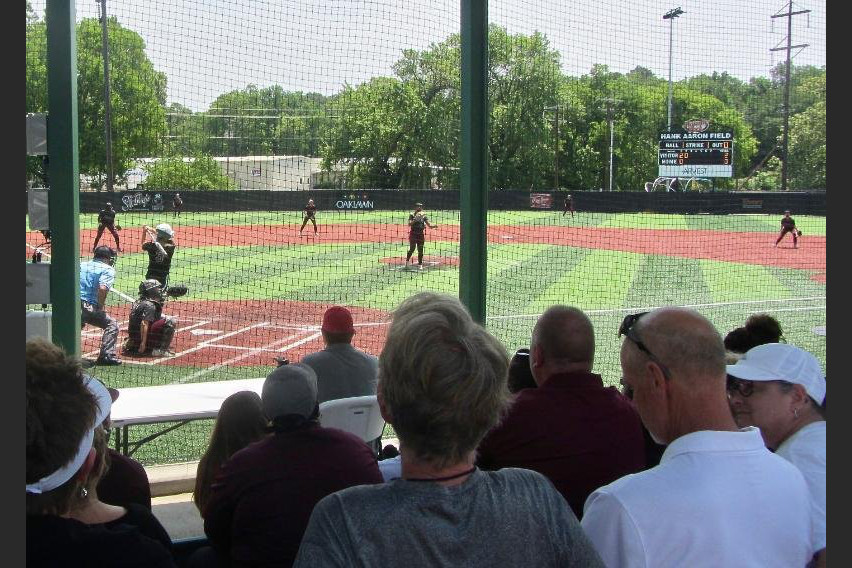 Hank Aaron Field hosts a girls’ softball game. (Special to the Democrat-Gazette/Marcia Schnedler)
The one field big enough for games by high-school and older players is named for the legendary Ruth. The other four, with shorter outfield fences for youth baseball (as well as softball), honor fellow Hall of Fame members Cy Young, Honus Wagner, Jackie Robinson and Hank Aaron. Young and Wagner played during the long era when organized baseball banned Black players. Robinson and Aaron starred after the sport desegregated following World War II.

A sign at the main entrance proclaims Majestic as the park "where baseball's past meets baseball's future." That storied past goes back to 1908, when the property near the intersection of Belding Avenue and Valley Street east of Central Avenue became a baseball field, after the Detroit Tigers leased it for preseason practice.

According to the Arkansas Baseball Encyclopedia, the field was taken over in 1909 by the Boston Red Sox and named Majestic Park because the team stayed at the Majestic Hotel. Jaycee Park was built there in 1947 and served as home for the minor-league Hot Springs Bathers until 1955. Starting in the 1930s, youth baseball was played on the site under the auspices of the Hot Springs Boys and Girls Club of Hot Springs. 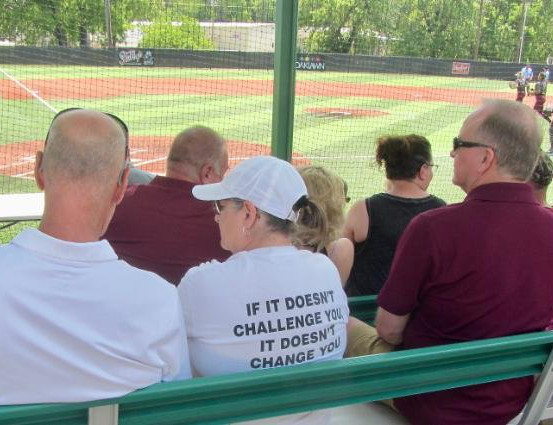 One fan’s T-shirt at Majestic Park sports an inspirational message. (Special to the Democrat-Gazette/Marcia Schnedler)
The youth club's closing in 2018 led to the successful campaign to create the new Majestic Park. At the February ribbon cutting, Visit Hot Springs Chief Executive Officer Steve Arrison called the complex "a monument to the generosity of the citizens of Hot Springs who voted to finance it. They will benefit not only from the economic impact it will bring in the form of visiting baseball teams and their supporters, but also from the decades of joy it will bring to Hot Springs kids who play baseball there."

Admission is free to games of the Majestic Park Cal Ripken/Babe Ruth League for youngsters 5 to 15. There is an admission fee for some games involving older players. The ballpark food is moderately priced: $3 for a hot dog, $2 for popcorn and soft drinks. There's a kids playground.

Majestic Park marks another major step in the city's ongoing campaign to promote its baseball heritage. An early step came in 2011 when the Hot Springs Advertising & Promotion Commission issued a set of postcards with photographs from the Garland County Historical Society's archives that pictured Ruth in Hot Springs. 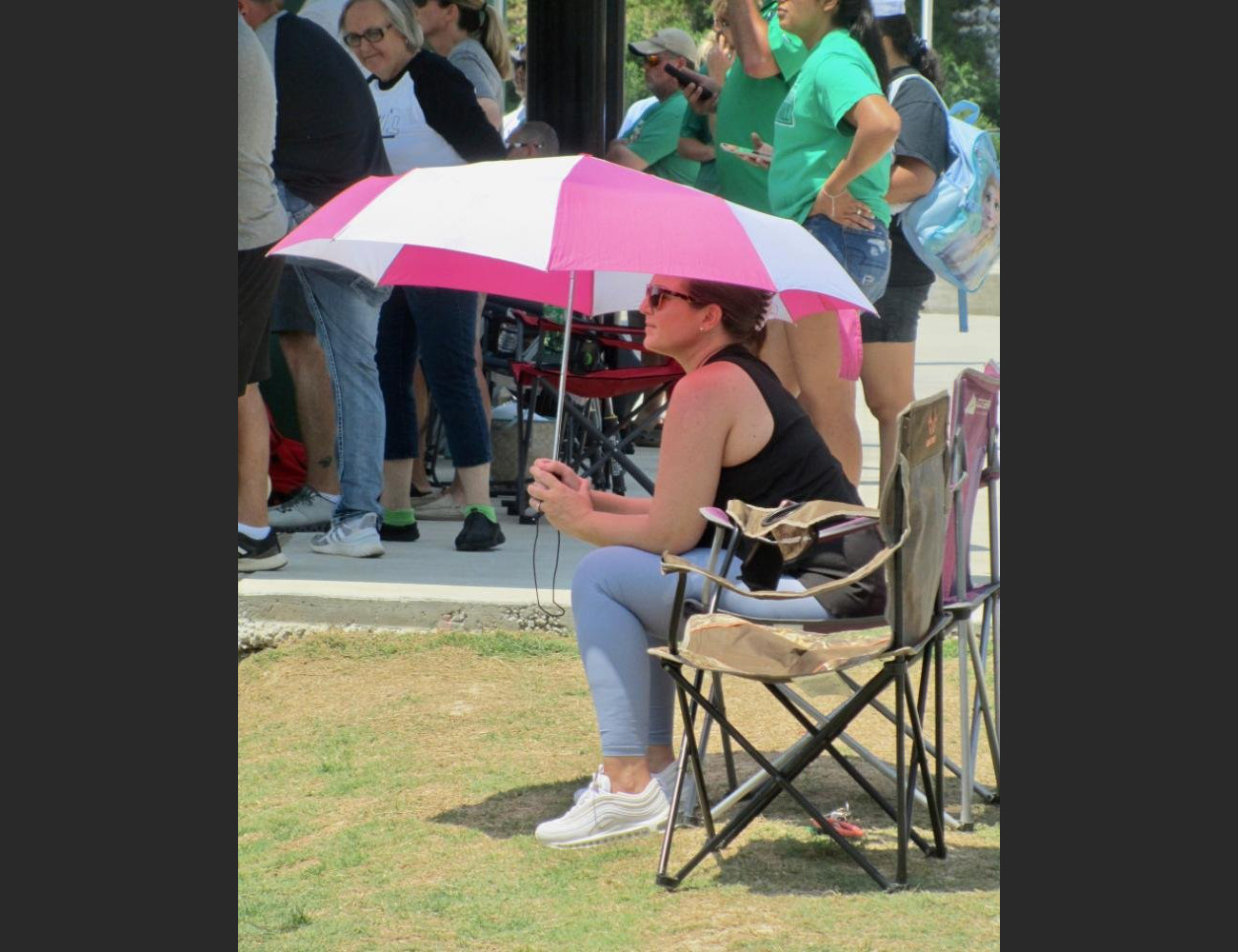 A fan uses her umbrella as a parasol at Hot Springs’ Majestic Park. (Special to the Democrat-Gazette/Marcia Schnedler)
The cards' popularity led to creation of the Hot Springs Historic Baseball Trail, now featuring 32 plaques describing former spring-training locations and stars who worked out on the fields. A good number of markers depict players from the so-called "Golden Age of Baseball in Hot Springs," 1909 to 1919.

One memorable plaque, at the site of the former Whittington Ball Park, describes the stupendous home run that Ruth hit on St. Patrick's Day 1918. It is said to have traveled 573 feet, one of the longest homers anywhere, and landed across Whittington Avenue in the Arkansas Alligator Farm and Petting Zoo. 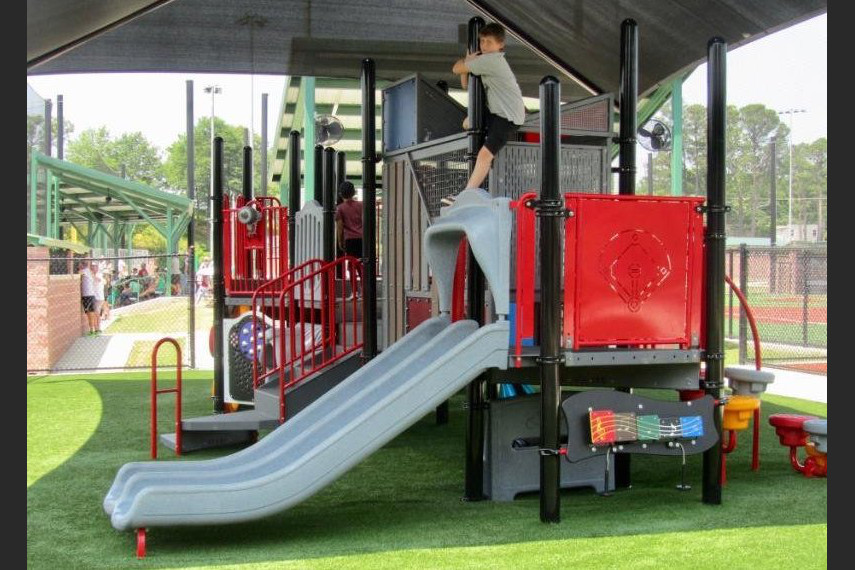 A playground at Majestic Park provides climbing space for youngsters. (Special to the Democrat-Gazette/Marcia Schnedler)
Ruth also stars in the gigantic mural "Playing Cards," which adorns the south wall of the Craighead Laundry Building, 225 Malvern Ave., south of Bathhouse Row. Pictured on giant trading cards along with the New York Yankees great are Wagner, Robinson and pitcher Satchel Paige. At the other end of the 160-foot-long artwork, Lefty Grove is throwing a fastball that zooms through the other four cards.

Another tribute to Ruth is being created for installation at the entrance to Majestic Park. Sculpted by Chad Fisher, the 8-foot-tall bronze monument will show Ruth in the uniform of the Yankees, for whom he became the homer-clouting "Sultan of Swat."

Schedules of games and tournaments at Hot Springs' Majestic Park, Carson and Belding streets, can be found at majesticpark.org. Information on the Hot Springs Historic Baseball Trail is available at hotspringsbaseballtrail.com.

Print Headline: Take me out to the ballpark