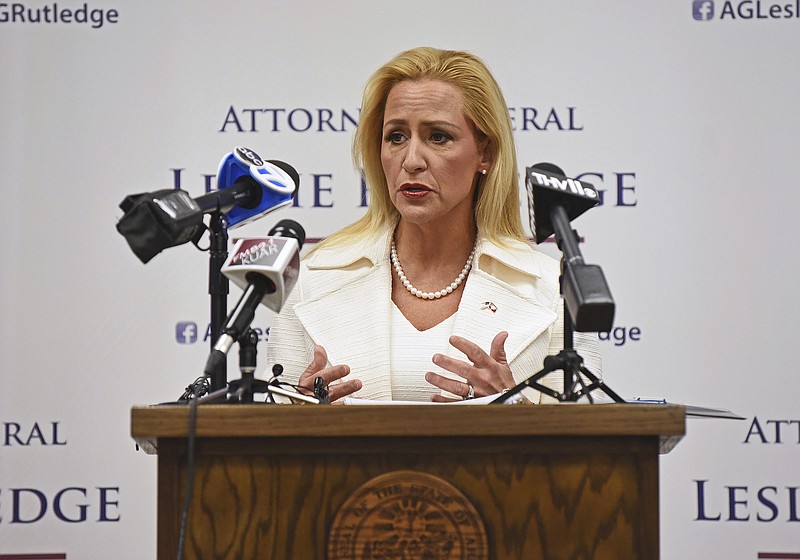 The Maumelle Republican avoided a June 21 runoff election by winning more than half the votes cast in the primary for state government’s second-ranking elected official.

With an estimated 96% of the votes counted, unofficial returns in the Republican primary were:

“I am humbled and honored to be the Republican nominee for Arkansas lieutenant governor and look forward to victory in November,” Rutledge said afterward.

“Tonight, Republican voters have again sent a message that they want experienced conservative leadership fighting the woke agenda of Biden’s liberal left,” she said “As the next lieutenant governor of our great state, I will continue to fight for Arkansans’ individual liberties, constitutional rights and conservative values.”

Rutledge will vie with Democratic candidate Kelly Krout of Lowell and Libertarian candidate Frank Gilbert of Little Rock in the Nov. 8 general election to succeed term-limited Republican Lt. Gov. Tim Griffin of Little Rock, who is running for attorney general.

The lieutenant governor’s salary is $46,704 a year. The post is considered to be part time.

Under the Arkansas Constitution, the position’s duties are to preside over the 35-member state Senate with a tie-breaking vote and to serve as governor if the state’s chief executive is impeached, is removed from office, dies or is otherwise unable to discharge the office’s duties.

Two of the state’s governors during the past 30 years were lieutenant governors first. In December 1992, Democratic Gov. Bill Clinton resigned after he was elected president, clearing the way for Democratic Lt. Gov. Jim Guy Tucker to be governor. In July 1996, Tucker resigned because of felony convictions, allowing Republican Lt. Gov. Mike Huckabee to be governor.

This year’s six-candidate Republican primary for lieutenant governor grew acrimonious during the past few months.

Rutledge holds the highest-profile elected post among the GOP candidates.

In August 2019, Rapert was the first Republican to announce his bid for lieutenant governor.

In November 2021, Rutledge was the last Republican candidate to join the race for lieutenant governor as she abandoned her run for governor. Rapert emerged as her staunchest critic in the past few months.

Through May 14, she reported raising the largest amount in contributions and spending the most for the primary among the six candidates.

During the primary, Rutledge said she would use her experience as attorney general for the past 7½ years to work closely with the governor as lieutenant governor

She said her top priorities would include eliminating the state’s individual income tax, providing more educational options for parents and their children, providing more robust workforce development for junior high and high school students, keeping Arkansas’ status as the most “pro-life” state in the nation, and helping create more jobs in the state.

Rutledge said she has put off to the side for now her plan to propose a constitutional amendment that would eliminate the state’s individual income tax, instead supporting the now-GOP gubernatorial nominee Sarah Huckabee Sanders and her plans to phase out the individual income tax

During the campaign, Rapert panned Rutledge for “running down Sarah Huckabee Sanders on a consistent basis for nearly one solid year” as a gubernatorial candidate, and suggesting she would be bored as lieutenant governor after serving as the state’s attorney general. He also charged that she lied to him that she didn’t plan to run for lieutenant governor.

Rutledge said it’s “absolutely inaccurate” for Rapert to suggest she spent a year running down Sanders in her campaign for governor. She said she would work just as hard as lieutenant governor as she has as attorney general.

Rutledge said “while I was running for governor, I had no intentions of running for lieutenant governor, but circumstances changed and I want to keep serving the people of Arkansas,” and Rapert’s suggestion that she lied to him is “absolutely silly.”

Bledsoe, Rapert and Webb each criticized Rutledge over her office significantly boosting its spending on radio and television ads in the past few years, with the candidates alleging she was promoting herself at the state’s expense.” Rutledge dismissed the criticism as “nothing more than silly political attacks.”

She said she has spent the past 7½ years as attorney general trying to increase Arkansans’ awareness of the office’s services and that the office received 110,000 constituent phone calls in 2021. The covid-19 pandemic led her office to increase its radio and TV ad spending — which is financed out of money from lawsuits won by the office — in order to bolster its outreach efforts, she said.

Before fiscal 2020, the largest amount the office had spent on radio and television ads since at least 2008 was $459,000 in fiscal 2014, when Democrat Dustin McDaniel was attorney general. Fiscal 2014 started in July 2013; McDaniel withdrew from the governor’s race in the middle of the previous fiscal year, in January 2013.