‘I want to be there’: UALR sprinter Cameron Jackson eyes NCAA Championship bid as capstone to sophomore season 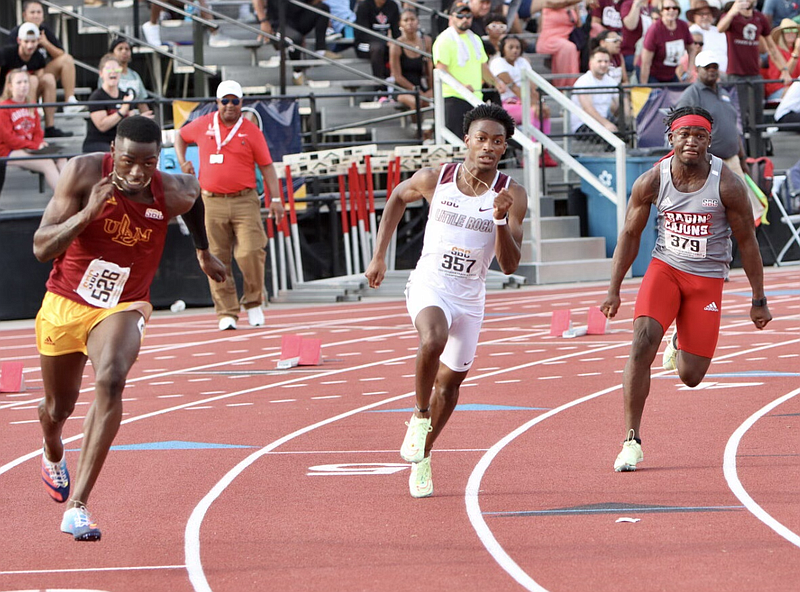 UALR sprinter Cameron Jackson wasn’t thrilled with his showing at the Little Rock Twilight on April 15. He’d been baited into running another’s race, shooting out of the blocks quicker than he’d planned and, ultimately, finished second in the 100 meters on his home track.

But then Jackson took a glance at the clock at the Coleman Sports Complex in Little Rock.

One-hundredth of a second out of first place. The fastest mark ever at UALR. The 10th-best time in the world in 2022 to that point.

Perhaps it wasn’t too bad?

Jackson has only further etched his name into the Trojans’ record book in the month since that run, adding the second-fastest 100 time in program history, winning three events at the Sun Belt Conference outdoor track and field championships and becoming the second UALR athlete to be named Sun Belt men’s track and field performer of the year.

Today, Jackson will run his 100 heat at the NCAA West Preliminaries at Fayetteville, with a pair of sprints separating the sophomore from next month’s NCAA Championships at Eugene, Ore. The top-12 finishers of 48 entrants will earn trips to Eugene.

When he secured a commitment from Jackson in early 2020, before covid-19 cut Jackson’s senior season of high school short, he thought UALR might have gotten lucky. Had Jackson run more that spring, a power-conference program like Texas or Texas A&M might’ve swooped in.

But Jackson also found a fit with the Trojans.

Having grown up the seventh of eight tightly knit siblings, Jackson needed college to feel like home.

“I remember when he moved in his freshman year, it was like a party,” Behnke said. “His dorm room was full of relatives and everyone was there.”

The 2020-21 campaign was kind to Jackson, despite injuries in both the winter and spring of his debut season in Little Rock. He was named Sun Belt Freshman of the Year during the 2021 indoor season, finishing first in the 60 meters.

Jackson was as close with his great-grandmother, Lettie Conway, as anyone.

When he returned to his hometown of Kilgore, Texas, Jackson brought his gold medal, allowing the weight of his work rest in Lettie’s hands.

On the same Birmingham Crossplex track where he’d excelled a year prior, Jackson false-started in his 60 heat and missed out on the 200 final.

“Everything went wrong,” Jackson said. “I personally didn’t think it affected me as much as it did until I was walking away from as a false start. The 200, I was out of it. I had nothing to go.

“It just really took a mental toll at the worst time.”

Jackson skipped the Trojans’ first meet of the spring after taking time away from training to mourn with his family in Kilgore. He only ran the 200 on his return in mid-March, and his first competitive 100 time on April 8 was 10.42 seconds.

The 10.10 a week later altered the course of his season.

All but guaranteed a trip to Fayetteville for the NCAA Preliminaries, Jackson took more risks in training this spring. Behnke said he believes that in the right conditions, Jackson is capable of cracking 10 seconds, a time that would likely earn him a medal at the NCAA Championships.

Jackson is still trying to add muscle to his frame while relying on the quick-twitch muscles that Behnke identified as a recruit.

Even for a sprinter, he’s still on the slender side — Jackson weighs in at 135 pounds, much lighter than past Olympian sprinters like former Arkansas Razorback Tyson Gay (165) and Justin Gatlin (176).

The goal is to eventually achieve similar heights. After this season ends, Jackson will take the summer off, then begin work toward a qualifying time for the 2024 U.S. Olympic Trials. If things go as planned, he’d redshirt his senior spring at UALR in 2024 with sights on the Summer Games in Paris that year.

The objective this week is much simpler: Finish among the top three in his first-round heat today, then do the same in the quarterfinals Friday.

Do that and Jackson will ensure a trip to the University of Oregon’s Hayward Field. It’s a feat accomplished previously by just three UALR men.

“Most sprinters I’ve coached, almost all of them have had their personal bests when they’re winning by a lot,” Behnke said. “[Cameron] is different to where he’s so good at staying relaxed, if he’s pushed, he can run that time that he needs.”

Making it to Eugene would mean a chance to run the stunning $200 million cauldron that will be the site of this year’s world championships.

Jackson is plenty familiar with Hayward Field as it has hosted seven of the last NCAA championships. He doesn’t want to watch this year’s championship on TV.

“I want to be there,” Jackson said. “I want to come home with points.”