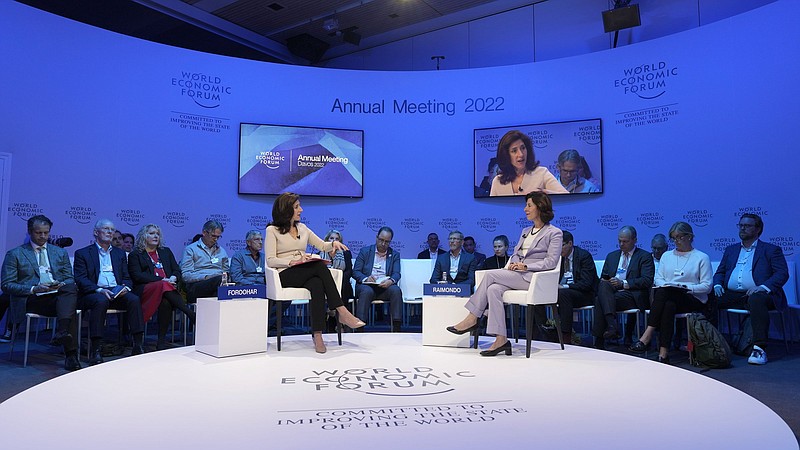 The risks to the global economy are many, leading to an increasingly gloomy view of the months ahead for corporate leaders, government officials and other VIPs at the World Economic Forum's annual meeting in the Swiss resort town of Davos. The war has been a thread, setting back the global economic recovery from the pandemic, economists say.

The managing director of the International Monetary Fund sought to dispel the gloom this week, saying a global recession isn't in the cards but "it doesn't mean it's out of the question."

Kristalina Georgieva noted that the IMF expects economic growth of 3.6% for 2022, which is "a long way to global recession." But she acknowledged that it's going to be a "tough year" and one of the big problems is surging food prices, partly fueled by Russia's war.

"The anxiety around access to food at a reasonable price globally is hitting the roof," she said.

The brewing crisis -- especially for countries in Africa, the Middle East and Asia that rely on affordable wheat, barley and sunflower oil that Russia has blocked in the ports of major producer Ukraine -- has been a key topic in Davos. The European Union and United States have accused Russia of using food supplies as a weapon.

"Russia is looting Ukrainian grain from occupied territories, it's burning down Ukrainian food storages in other territories, it's destroying other Ukrainian agricultural infrastructure and equipment," European Commission Executive Vice President Valdis Dombrovskis said on a trade panel Wednesday. "Clearly, there is a deliberate action of Russia to create these global food security issues."

If Ukraine's supplies remain off the market, the world could face a food availability problem in the next 10 to 12 months, and "that is going to be hell on earth," World Food Program Executive Director David Beasley told The Associated Press in Davos.

Elites huddle every year to discuss ways to help save the world, though it's unclear how much concrete action the meeting produces. Panels and announcements focused Wednesday on the future of Europe and the internet, helping poorer countries with low-cost medicine and climate change, including an expansion of a public-private partnership aimed at propelling green technologies through corporate investment.

In Davos, economic and central bank officials debated the effects of moving abstract policy levers at their disposal, while company bosses outlined their worries about the business outlook.

"As we run our business, we think a correction is now well underway" in the global economy, Pat Gelsinger, chief executive officer of chipmaker Intel, said on the sidelines of the meeting.

Gelsinger said the semiconductor industry is still grappling with supply chain issues, including a slowdown in deliveries of the advanced equipment used to manufacture computer chips.

A global shortage of chips, used in everything from cars to kitchen appliances, erupted last year as demand recovered after the pandemic.

Gelsinger said Intel is better positioned than rivals to handle the supply chain issues because it has more control over sourcing.

"But like everybody, we're having to cope with the same challenges economically," he said at a news roundtable.

Gelsinger said he doesn't expect the semiconductor industry to work out the supply chain kinks until 2024.

Volkswagen's supply chain problems are easing, but it's dealing with a huge backlog of orders. The German automaker is seeing a "clear improvement through summer" on the supply of microchips it needs, Chairman Herbert Diess said.

VW-owned Audi has its "highest level of orders at the moment," but customers are facing wait times of a year or more, board member Hildegard Wortmann said during a news briefing.

The Kuwait-based company provides services for airlines like staff to check in passengers and shuttle to and from planes, load and unload baggage, and handle air cargo. It's merging with a U.K. rival to become the world's biggest aviation services company.

"Almost every airline I speak with is reporting a huge rebound, especially for this summer and particularly in leisure travel," El Houry said in an interview.

However, the industry is overshadowed by $200 billion worth of losses racked up during the pandemic. The other big problem is the surge in oil prices fueled by Russia's war, which will force airlines to raise airfares -- and potentially dampen travel demand.

"Our biggest customers are the airlines. And when airlines are feeling the pressure, guess what? They're going to pass on that pressure to us," El Houry said.

Besides the rising costs of fuel, food and other commodities that are causing a cost-of-living crisis, central banks are raising interest rates to tackle high inflation, and China is seeing a slowdown amid covid-19 lockdowns, said Gita Gopinath, IMF's first deputy managing director.

"So we have a confluence of shocks hitting the world," she said on a panel about global growth Wednesday.

It's especially acute in Europe, which the war in Ukraine has revealed, European Central Bank President Christine Lagarde said Wednesday.

"Europe is 20% more open to global value chains vulnerabilities than any other markets in the world. So it's not surprising that the breaking down and the bottlenecks of global value chains affect European companies and us more than others," she said.

Adena Friedman, president of the NASDAQ stock exchange company, said Monday on a panel on the U.S. economic outlook that "a selling decision is much easier than a buying decision" for investors who can't see where things are headed.

Information for this article was contributed by Jamey Keaten, Peter Prengaman and Paul Wiseman of The Associated Press.