Commissioner struggles to explain slow response by Compiled by Democrat-Gazette Staff From Wire Reports | May 26, 2022 at 4:28 a.m. 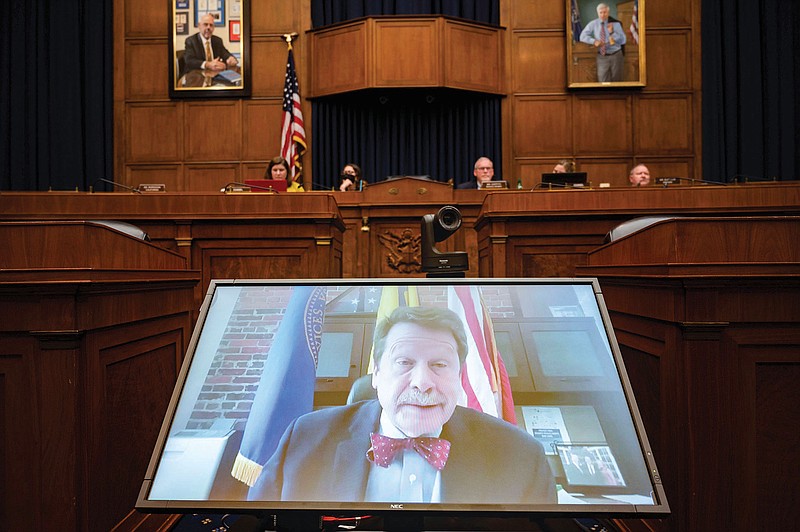 “Too slow and there were decisions that were suboptimal along the way,” Food and Drug Administration Commissioner Robert Califf said of his agency’s response during video testimony Wednesday before a House Commerce Oversight and Investigations subcommittee hearing on the nationwide baby formula shortage. (AP/Kevin Wolf)

WASHINGTON -- The head of the Food and Drug Administration faced bipartisan criticism from House lawmakers Wednesday over months of delays investigating problems at the nation's largest baby formula plant that prompted an ongoing shortage.

FDA Commissioner Robert Califf laid out a series of setbacks in congressional testimony that slowed his agency's response, including a covid-19 outbreak at the plant and a whistleblower complaint that didn't reach FDA leadership because it was apparently lost in the mail.

Califf testified before a House subcommittee investigating the shortage, which has snowballed into a national political controversy and forced the U.S. military to begin airlifting supplies from Europe.

The shortage largely stems from Abbott's Michigan plant, which the FDA shut down in February because of contamination issues. Under fire from Congress, parents and the media, Califf gave the first detailed account Wednesday of why his agency took months to inspect and shutter the plant despite learning of potential problems as early as September.

The FDA's response was: "Too slow and there were decisions that were suboptimal along the way," Califf told lawmakers.

The FDA and President Joe Biden face mounting political pressure to explain why they didn't intervene sooner to head off the supply crisis.

"Why did it take an onslaught of national media attention for the Biden administration to act with a sense of urgency required to address an infant formula shortage?" asked Rep. Morgan Griffith, R-Va., the committee's ranking Republican.

Califf said the agency had been trying to monitor formula supplies since 2020 when covid-related disruptions first emerged, but regulators have limited visibility into company supply chains.

The House panel also heard from three formula manufacturers, including a top Abbott Nutrition executive who apologized to parents for the shortage.

"We let you down," said Abbott vice president Christopher Calamari. "We are deeply sorry."

Calamari repeatedly sidestepped questions about whether any employees were disciplined or fired over the problems at the plant, which included standing water, a leaky roof and damaged equipment.

FDA staff began homing in on Abbott's plant last fall while tracking several bacterial infections in infants who had consumed formula from the facility. The four cases occurred between September and January, causing hospitalizations and two deaths.

The FDA planned to begin inspecting the Sturgis, Mich., plant on Dec. 30, according to Califf's testimony. But Abbott warned that about a dozen plant employees had tested positive for covid-19 and requested a delay. As a result, the FDA didn't begin its inspection until Jan. 31.

After detecting positive samples of a rare but dangerous bacteria in multiple parts of the plant, the FDA closed the facility and Abbott announced a recall of its formula on Feb. 17.

"We knew that ceasing plant operations would create supply problems, but we had no choice given the insanitary conditions," said Califf, calling the problems "shocking" and "unacceptable."

The food safety part of the FDA, according to experts, has been chronically understaffed and underfunded. Those problems, critics say, have been exacerbated by poor communication between its centers. More broadly, experts say, the agency has prioritized the drug and medicine side, frequently drawing leaders with medical backgrounds and not food industry knowledge.

Rep. Billy Long, R-Mo., asked the commissioner to rate the agency's response on a scale of 1 to 10.

"Because of the outcome, I'd give it at best a 4 or 5," Califf responded. "I knew before coming in that food needs to be brought back at the FDA; it's a major issue."

Abbott and the FDA have reached an agreement to reopen the plant next week, under which the company must regularly undergo outside safety audits.

Califf also struggled to explain delays in following up on a whistleblower complaint alleging numerous safety violations at Abbott's plant, including employees falsifying records and failing to test formula before shipment.

Several FDA staffers reviewed the complaint in late October when it was sent to a regional FDA office, but an interview didn't take place until two months later, in part because of the whistleblower's scheduling conflicts.

Senior FDA officials eventually received the complaint via email, but not until February because of "an isolated failure in FDA's mailroom, likely due to covid-19 staffing issues," according to the FDA testimony. A mailed copy addressed to then-acting commissioner Dr. Janet Woodcock has still not been located.

Political concern over the shortage has landed squarely on the FDA and Califf, who was confirmed to the FDA role for a second time in February. The problems have escalated into a political firestorm for the White House, which has invoked the Defense Production Act and emergency import measures.

The FDA contacted the U.S. Department of Agriculture on Feb. 11. about a potential shortage, just days before Abbott's recall, according to FDA's timeline.

Califf said the FDA requested new authorities, funding and staff to track supply chain data that could have helped get ahead of the problem, but noted Congress has not provided them.

Several lawmakers raised longstanding concerns that the FDA's food program -- which oversees most U.S. foods except meat, poultry and eggs -- is underfunded and needs restructuring.

The program has a convoluted leadership structure in which there is a director of FDA's Center for Food Safety and Applied Nutrition and a separate deputy commissioner for "food policy and response." The deputy commissioner has more of a safety focus, but has no direct authority over food center staff nor field staff who inspect company plants.

Both officials testified Wednesday, along with Califf.

"I don't think there's one person that is responsible," Diaz-Barragan responded. "I just think it goes to show there needs to be restructuring and it needs to be more clear who's ultimately responsible."

Later Wednesday afternoon, Abbott's Calamari told lawmakers his company plans to build extra capacity and redundancies into its supply chain to avoid future disruptions. He reiterated the company's point that the FDA has not drawn a direct link between the illnesses reported in infants and bacteria samples collected from its plant.

After the company restarts production it will be able to produce more formula than before the recall, he noted.

The FDA should have been asking how its actions might impact supply, said Jerry Mande, a senior USDA official during the Obama administration.

"Formula must be safe, absolutely," he said. "But this is a complex issue, not only for infants, but for others who rely on specialty formula products, where shutting off supply could cause deaths, too. You must carefully balance both and the steps you're going to take."

The severe shortage of baby formula has prompted the Federal Trade Commission to begin an inquiry into the industry's consolidation and whether online resellers have taken advantage of desperate families struggling to find formula.

"The FTC is launching a public inquiry to identify the factors that contributed to the shortage or hampered our ability to respond to it," Lina M. Khan, the agency's chair, said in a statement Tuesday. "Learning from this experience can help determine how we can minimize the risk of similar shortages in the markets for other life-sustaining products."

The agency said it would examine patterns of mergers and acquisitions to better understand how the industry -- which is now dominated by four manufacturers -- became so concentrated and how that consolidation should inform future merger reviews. The FTC will also examine federal regulations and trade barriers that prevent foreign companies from entering the infant formula market.

Federal officials are also seeking public input about instances in which families believe they have been scammed when trying to buy formula or been forced to pay exorbitant prices from online resellers.

Information for this article was contributed by Matthew Perrone of The Associated Press, Laura Reiley of The Washington Post and Madeleine Ngo of The New York Times. 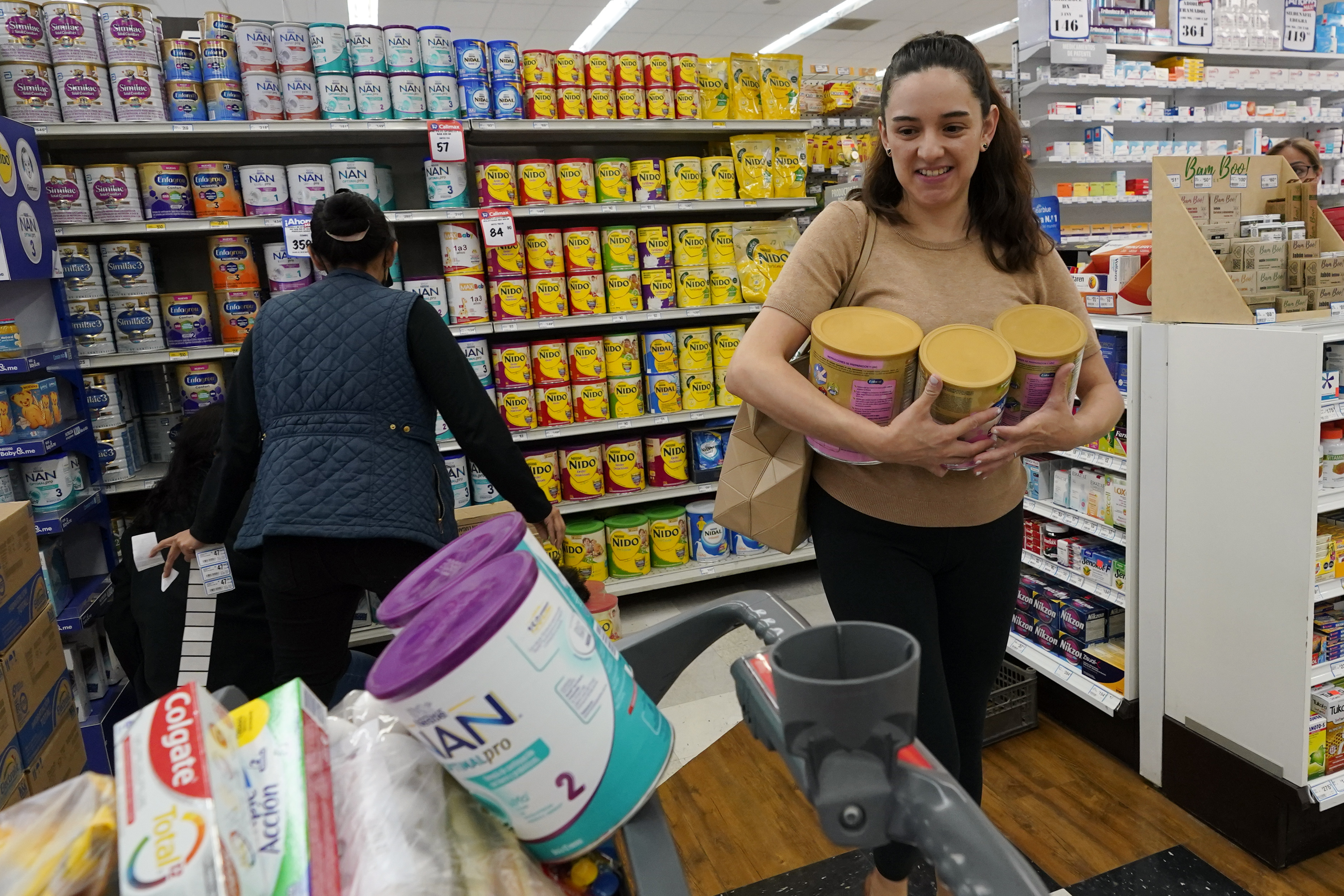 Michelle Saenz of Santee, Calif. buys baby formula at a grocery story across the border, Tuesday, May 24, 2022, in Tijuana, Mexico. As the baby formula shortage continues in the United States, some parents are opting to cross the border into Mexico, where the shelves are still stocked with options to feed their babies. (AP Photo/Gregory Bull) 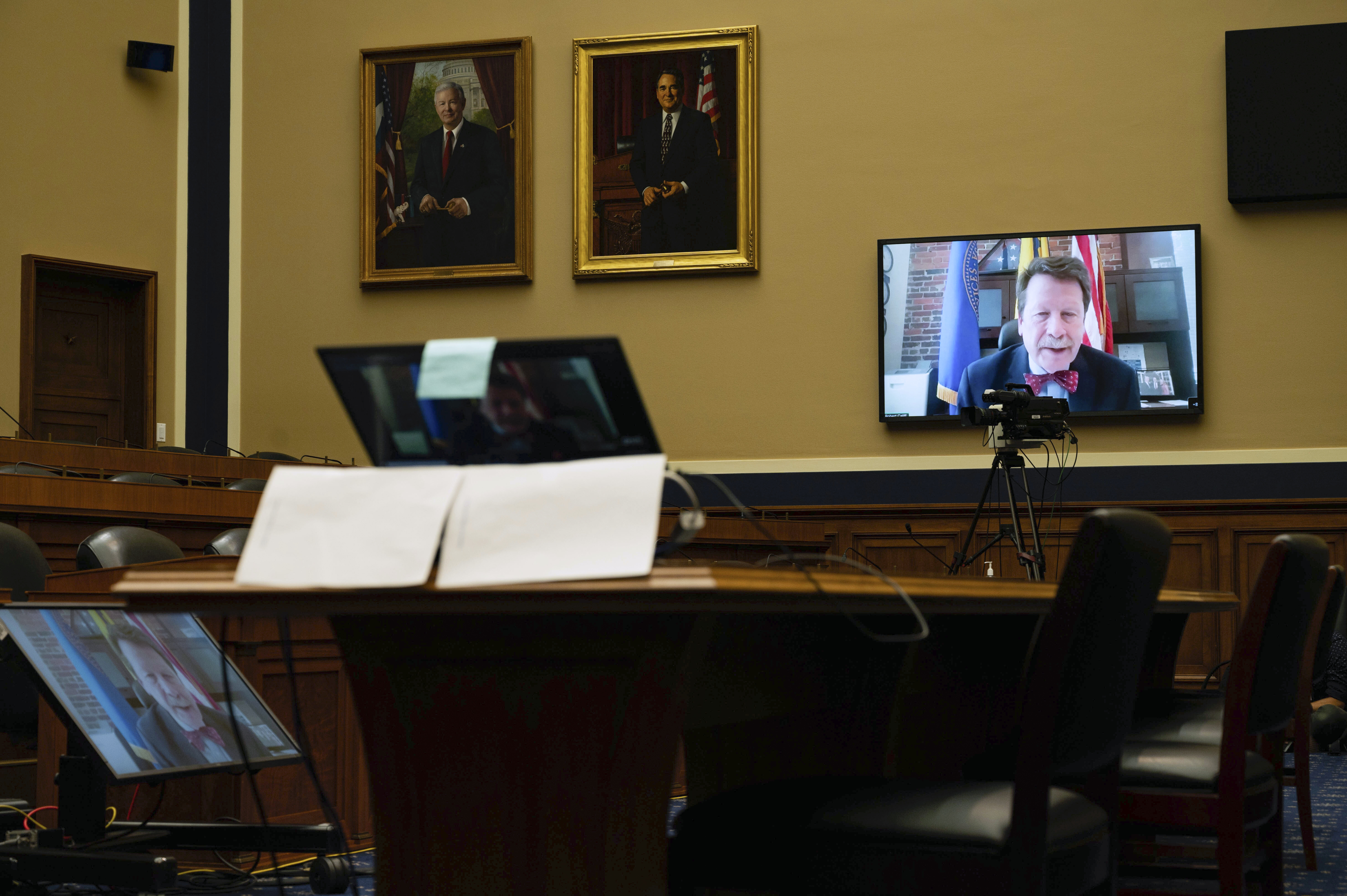