Army will accept older volunteers by Compiled by Democrat-Gazette Staff From Wire Reports | May 26, 2022 at 7:03 a.m. 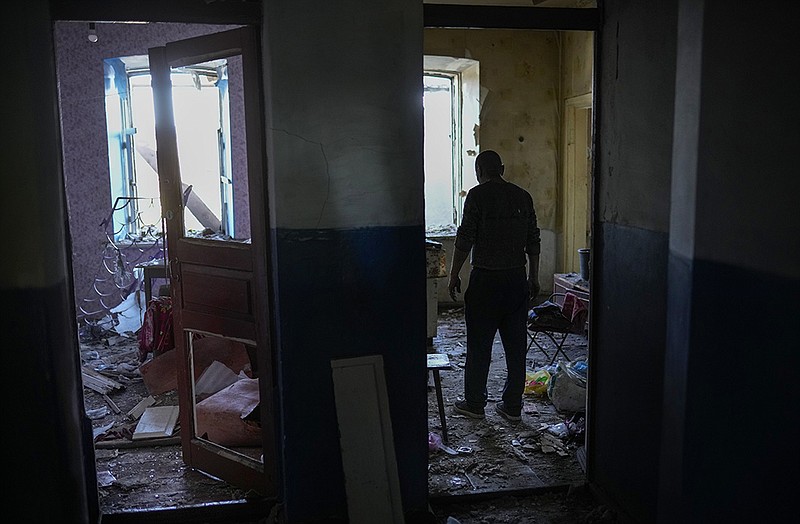 A resident gathers belongings from his damaged house Wednesday after a Russian attack in Pokrovsk in eastern Ukraine. Two rockets struck the town, injuring at least four people and damaging a row of houses. More photos at arkansasonline.com/ukrainemonth4/. (AP/Francisco Seco)

KYIV, Ukraine -- Russian President Vladimir Putin issued an order Wednesday to fast track Russian citizenship for residents of parts of southern Ukraine largely held by his forces, while lawmakers in Moscow passed a bill to strengthen the stretched Russian army.

Putin's decree applying to the Kherson and Zaporizhzhia regions could allow Russia to strengthen its hold on territory that lies between eastern Ukraine, where Moscow-backed separatists occupy some areas, and the Crimean Peninsula, which Russia seized in 2014.

The Russian army is engaged in an intense battle for Ukraine's eastern industrial heartland, known as the Donbas. In a sign that the Kremlin is trying to bolster its stretched military machine, Russian lawmakers agreed to scrap the age limit of 40 for those signing their first voluntary military contracts.

A description of the bill on the parliament website indicated older recruits would be allowed to operate precision weapons or serve in engineering or medical positions. The chair of the Russian parliament's defense committee, Andrei Kartapolov, said the measure would make it easier to hire people with "in-demand" skills.

Russian officials say only volunteer contract soldiers are sent to fight in Ukraine, although they acknowledge that some conscripts were put into the fighting by mistake in the early stages of the war.

Three months into Russia's invasion, Putin visited a military hospital in Moscow on Wednesday and met with some soldiers wounded in Ukraine, the Kremlin said in a statement.

It was his first known visit with soldiers fighting in Ukraine since he launched the war on Feb. 24. Ukrainian President Volodymyr Zelenskyy has visited wounded soldiers, civilians and children -- including at times when Russian troops were fighting on the outskirts of Kyiv.

A reporter for the state-run Russia1 TV channel posted a video clip on Telegram showing Putin in a white medical coat talking to a man in hospital attire, presumably a soldier.

The man, filmed from behind standing up and with no visible wounds, tells Putin that he has a son. The president, accompanied by Defense Minister Sergei Shoigu, responds: "He will be proud of his father," before shaking the man's hand.

Zelenskyy reiterated Wednesday that he would be willing to negotiate with Putin directly but said Moscow needs to retreat to the positions it held before the invasion and must show it's ready to "shift from the bloody war to diplomacy."

"I believe it would be a correct step for Russia to make," Zelenskyy told leaders at the World Economic Forum in Davos, Switzerland, by video link.

He also said Ukraine wants to drive Russian troops out of all captured areas. "Ukraine will fight until it reclaims all its territories," Zelenskyy said. "It's about our independence and our sovereignty."

In his nightly address to the nation, Zelenskyy strongly rebuffed those in the West who suggest Ukraine cede control of areas occupied by Russian troops for the sake of reaching a peace agreement.

Those "great geopoliticians" who suggest this are disregarding the interests of ordinary Ukrainians -- "the millions of those who actually live on the territory that they propose exchanging for an illusion of peace," he said. "We always have to think of the people and remember that values are not just words."

Zelenskyy compared those who argue for giving Russia a piece of Ukraine to those who in 1938 agreed to cede territory to Hitler in hopes of preventing World War II.

Russia already had a program to expedite the naturalization of people living in Luhansk and Donetsk, the two eastern Ukraine provinces that make up the Donbas and where the Moscow-backed separatists hold large areas as self-declared independent republics.

During a visit to the Kherson and Zaporizhzhia regions earlier this month, Russian Deputy Prime Minister Marat Khusnullin indicated they could become part of "our Russian family."

A Russia-installed official in the Kherson region has predicted the region would become part of Russia. An official in Zaporizhzhia said Wednesday that the region's pro-Kremlin administration would seek that as well.

"Every day of someone sitting in Washington, Berlin, Paris and other capitals, and considering whether they should or should not do something, costs us lives and territories," Kuleba said.

Zelenskyy said his army was facing the fiercest attack possible in the east by Russian forces, which in some places have many more weapons and soldiers. He pleaded for even more military assistance from the West, "without exception, without restrictions. Enough to win."

The governor of the Luhansk region, Serhiy Haidai, accused Russia of targeting shelters where civilians were hiding in the city of Sievierodonetsk.

"The situation is serious," Haidai said in a written response to questions from The Associated Press. "The city is constantly being shelled with every possible weapon in the enemy's possession."

Sievierodonetsk and nearby Lysychansk are the largest remaining towns held by Ukraine in Luhansk. The region is "more than 90%" controlled by Russia, Haidai said, adding that a key supply route for Kyiv's troops was coming under pressure despite stiff Ukrainian resistance.

Haidai said the road between Lysychansk and the city of Bakhmut to the southwest was "constantly being shelled" and that Russian sabotage and reconnaissance teams were approaching.

The governor of the Donetsk region, Pavlo Kyrylenko, said four civilians were injured when two rockets hit the town of Pokrovsk early Wednesday.

One strike left a crater at least 10 feet deep, with the remnants of what appeared to be a rocket still smoldering. A row of low terraced houses near the strike suffered significant damage.

"There's no place to live in left. Everything is smashed," Viktoria Kurbonova, a mother of two who lived in one of the terraced houses, said.

An earlier strike about a month ago blew out the windows, which were replaced with plastic sheeting. Kurbonova thinks that probably saved their lives since there was no glass flying around.

Russia said the strategic Ukrainian port of Mariupol was functional again after a nearly three-month siege that ended with the surrender last week of the last Ukrainian fighters holed up in a giant steel plant. Russia now has full control of Mariupol, on the Sea of Azov.

Russian Foreign Ministry spokesperson Maria Zakharova said the separatists in Donetsk planned to set up a tribunal to put the fighters on trial and that Moscow welcomes the action.

Meanwhile, European Union efforts to impose an embargo on Russian oil faced more roadblocks Wednesday as Hungarian officials said they would not back the plan in its current form and recommended removing the topic from the agenda of an EU leaders' summit next week

The EU has worked to forge a consensus among its 27 member nations for cutting off Russian oil by the end of 2022 to block a key source of revenue financing Russia's war in Ukraine.

While some countries in central and Eastern Europe initially expressed reservations over the embargo, Hungary remains the most vocal member nation blocking the measure, which is part of a sixth proposed round of EU sanctions against Russia.

During a news conference in the Hungarian capital, Budapest, Foreign Minister Peter Szijjarto said Wednesday that Hungary would not vote in favor of the oil embargo proposal "as long as it makes Hungary's energy supply impossible."

He blamed the EU's executive branch for pushing the plan without ensuring the energy security of Hungary, which gets 85% of its natural gas and more than 60% of its oil from Russia.

While the EU earlier offered exceptions to landlocked countries like Hungary, Slovakia and the Czech Republic that are particularly dependent on Russian oil, granting them extended timelines for the phase-out, the government in Budapest has remained steadfast in its opposition to sanctions on Russian energy.

Hungarian Prime Minister Viktor Orban, who is considered Putin's closest EU ally, has argued that an EU oil boycott would be an "atomic bomb" for Hungary's economy and destroy its "stable energy supply."

Orban wrote a letter to the president of the European Council on Monday, asking that the proposed oil embargo be taken off the agenda of the summit set to begin May 30.

In the letter to Charles Michel, Orban said Hungary was "not in a position to agree to the 6th sanctions package until the negotiations succeed in resolving all outstanding issues," and that a solution was "very unlikely" to be reached before next week's summit.

"I am convinced that discussing the sanctions package at the level of leaders in the absence of a consensus would be counterproductive," Orban wrote. "It must remain our priority to maintain the unity of the European Union."

A senior Turkish official insisted after talks with Swedish and Finnish officials Wednesday that Turkey would not agree to the two Nordic countries joining NATO unless specific steps are taken to address Ankara's objections.

"We have made it very clear that if Turkey's security concerns are not met with concrete steps in a certain time frame the process will not progress," Ibrahim Kalin told a news conference after the talks in Ankara that lasted about five hours.

Kalin is the spokesman of Turkish President Recep Tayyip Erdogan, and a senior presidential aide.

Sweden and Finland submitted their written applications to join NATO earlier this month, in a move representing one of the biggest geopolitical ramifications of Russia's war in Ukraine that could rewrite Europe's security map.

Turkey has said it opposes the countries' membership in the Western military alliance, citing grievances with Sweden's -- and to a lesser extent Finland's -- perceived support of the Kurdistan Workers' Party, or PKK, and other entities that Turkey views as security threats.

The PKK, which is listed as a terror organization by several of Turkey's allies, has waged a decades-long insurgency against Turkey, a conflict that has cost the lives of tens of thousands of people.

Turkey's objections have dampened Stockholm's and Helsinki's hopes for joining NATO quickly amid Russia's invasion of Ukraine. All 30 NATO members must agree on admitting new members.

Kalin said Turkey's proposal to lift arms export limits was met with a "positive attitude" by the Swedish and Finnish delegations.

He added that talks would continue once the Nordic governments had responded to Turkey's demands. 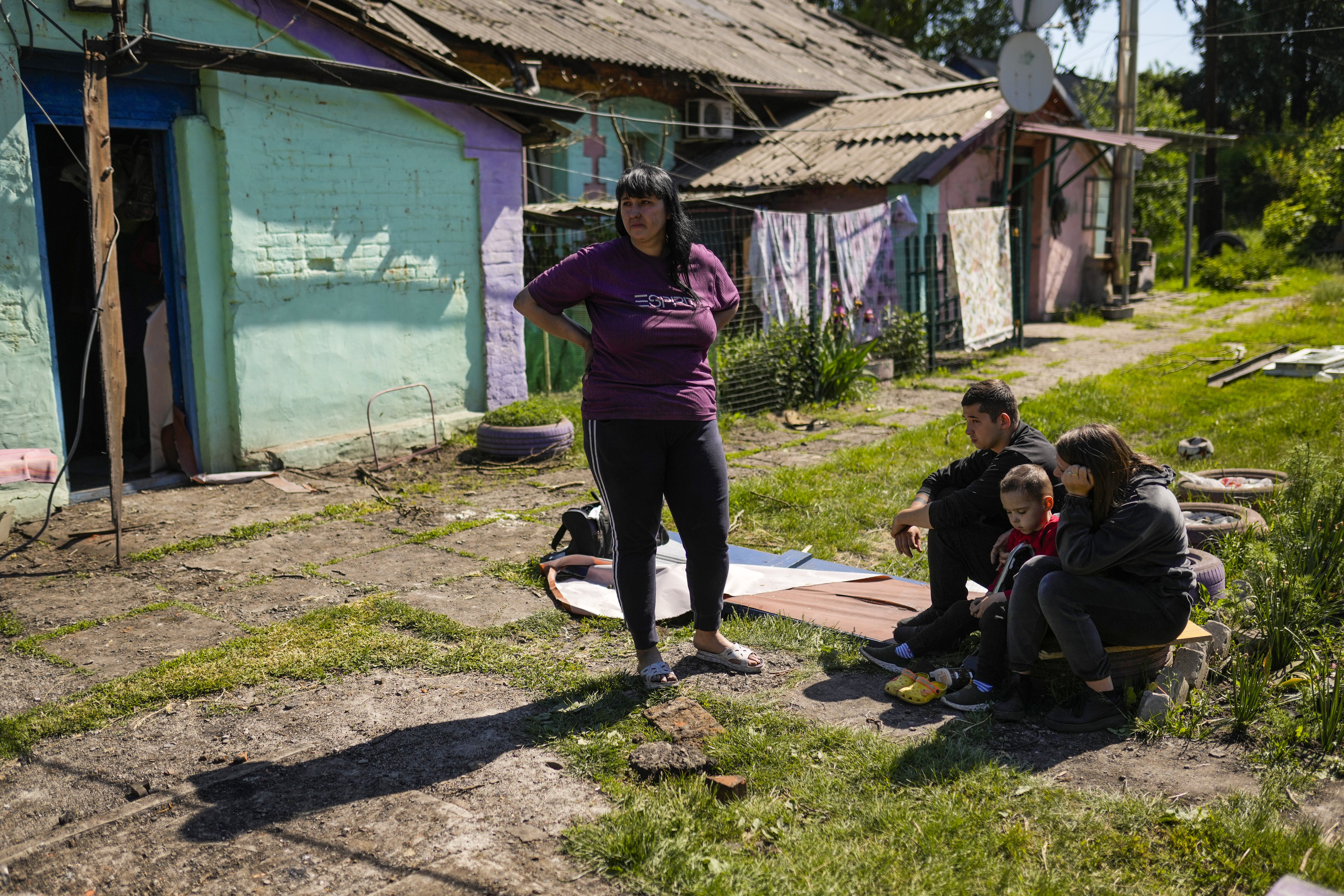 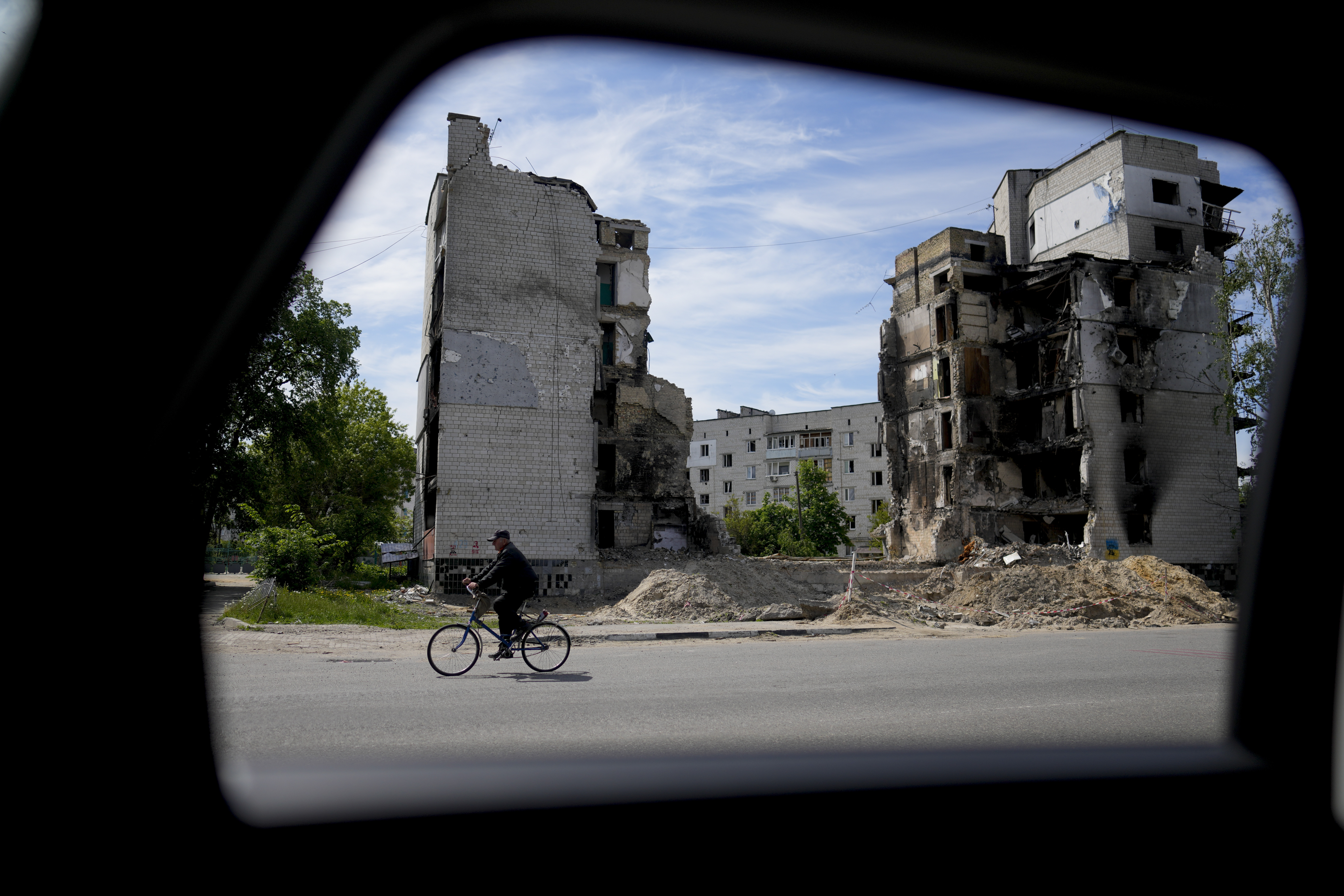 A man rides a bicycle in front of a building ruined by shelling in Borodyanka, on the outskirts of Kyiv, Ukraine, Wednesday, May 25, 2022. (AP Photo/Natacha Pisarenko) 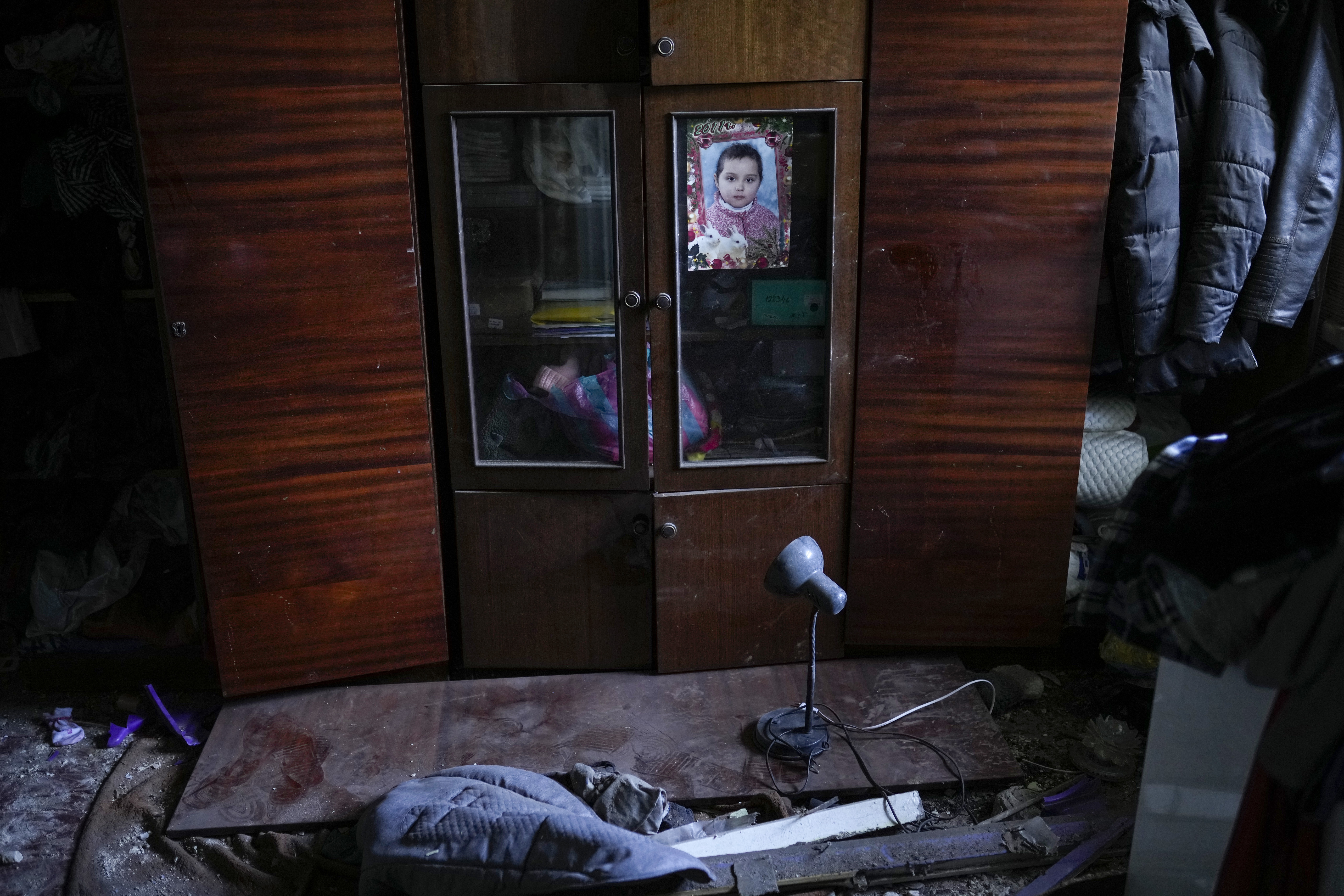 A photography hangs from a cabinet in a living room of a heavily damaged house after a Russian strike in Pokrovsk, eastern Ukraine, Wednesday, May 25, 2022. Two rockets struck the eastern Ukrainian town of Pokrovsk, in the Donetsk region early Wednesday morning, causing at least four injuries. (AP Photo/Francisco Seco) 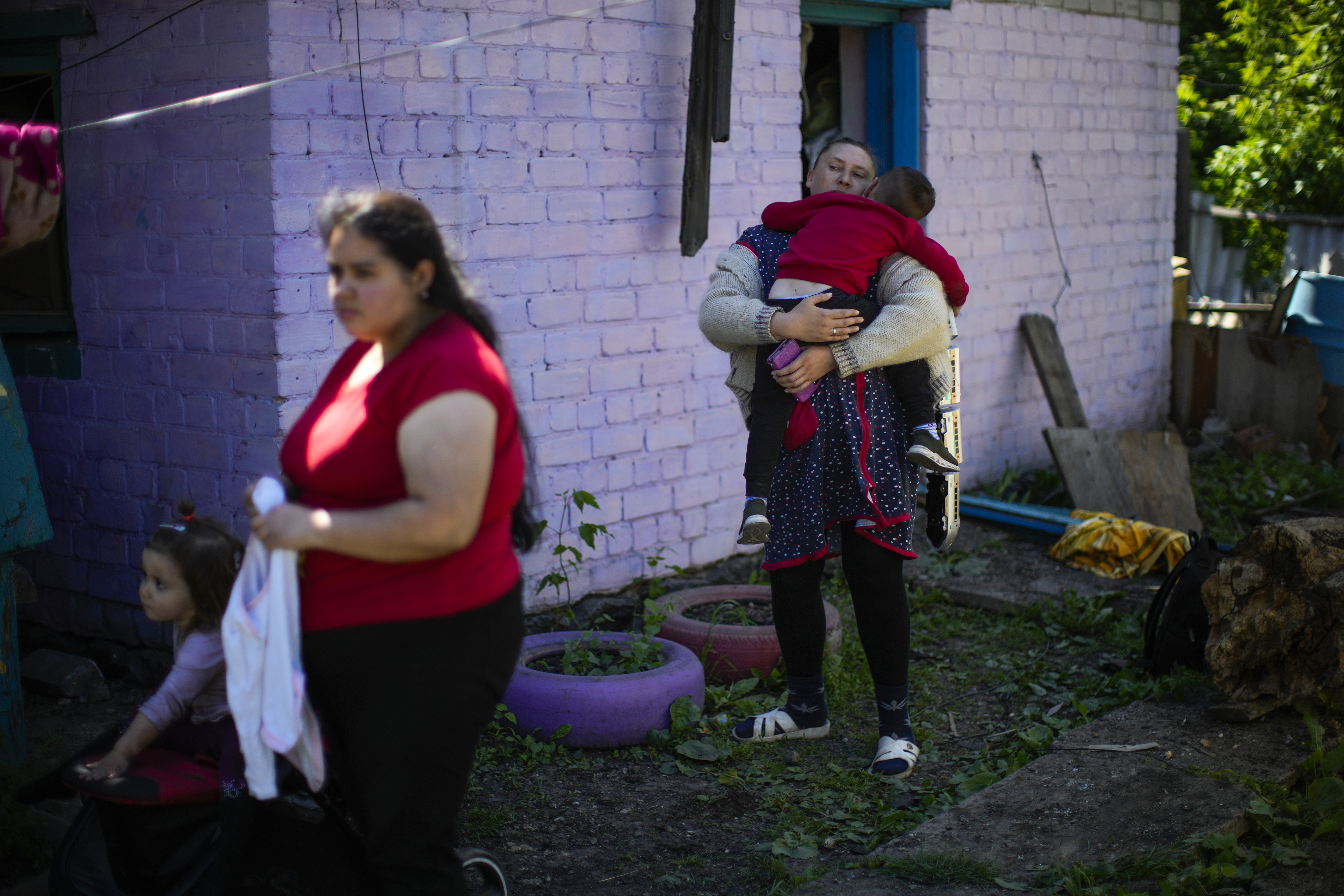 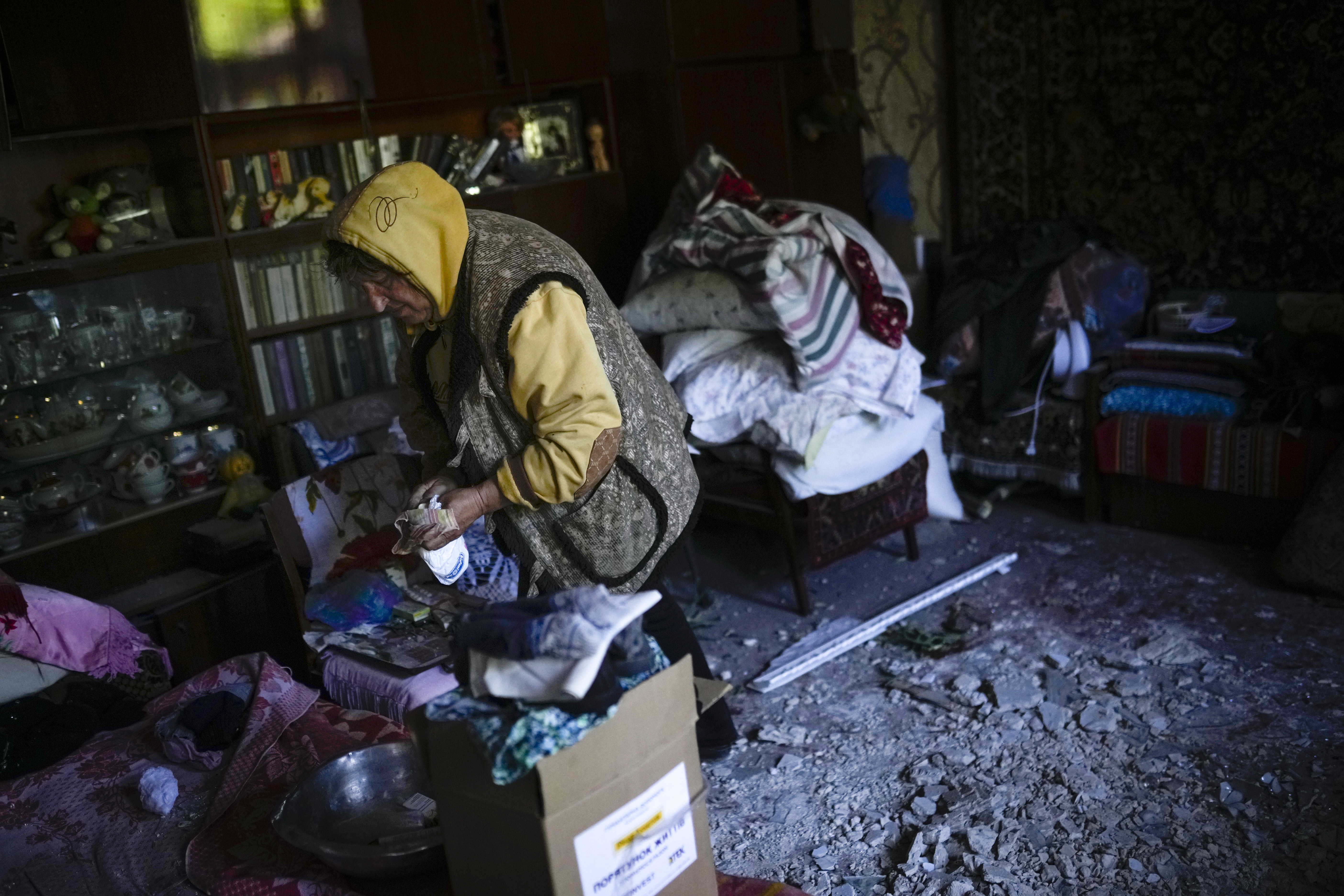 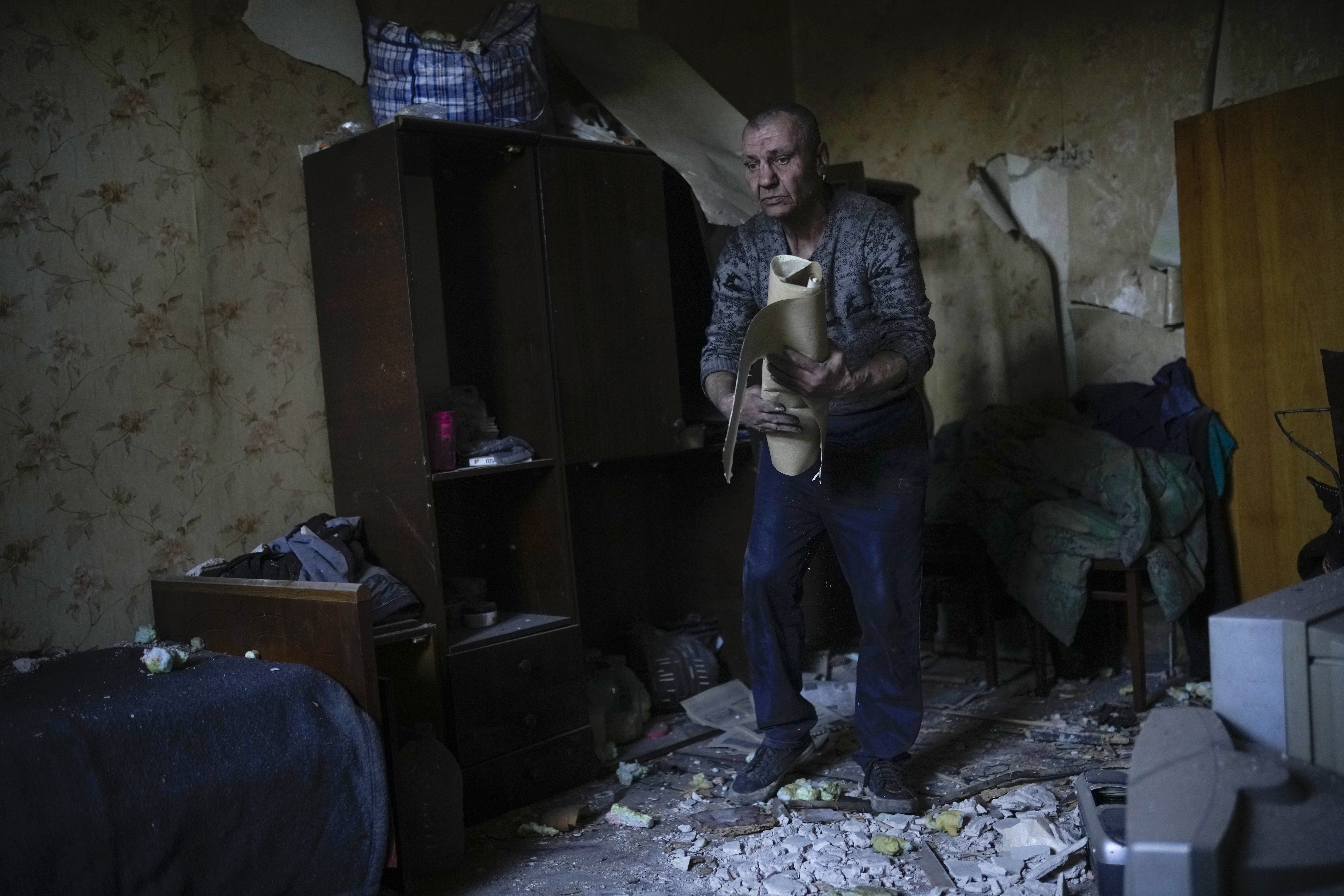 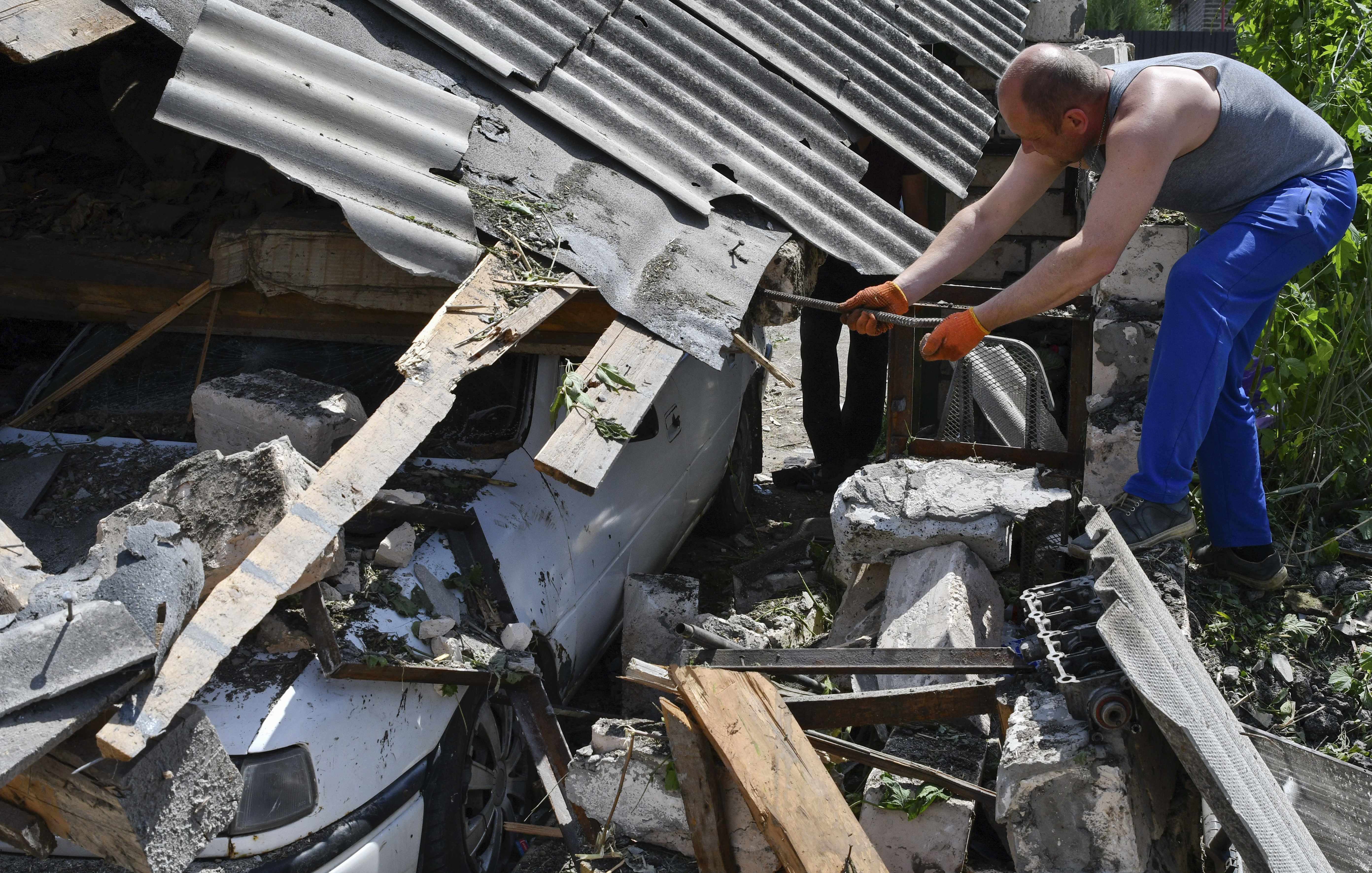 A resident removes debris from a destroyed house after Russian shelling in Kramatorsk, Ukraine, Wednesday, May 25, 2022. (AP Photo/Andriy Andriyenko) 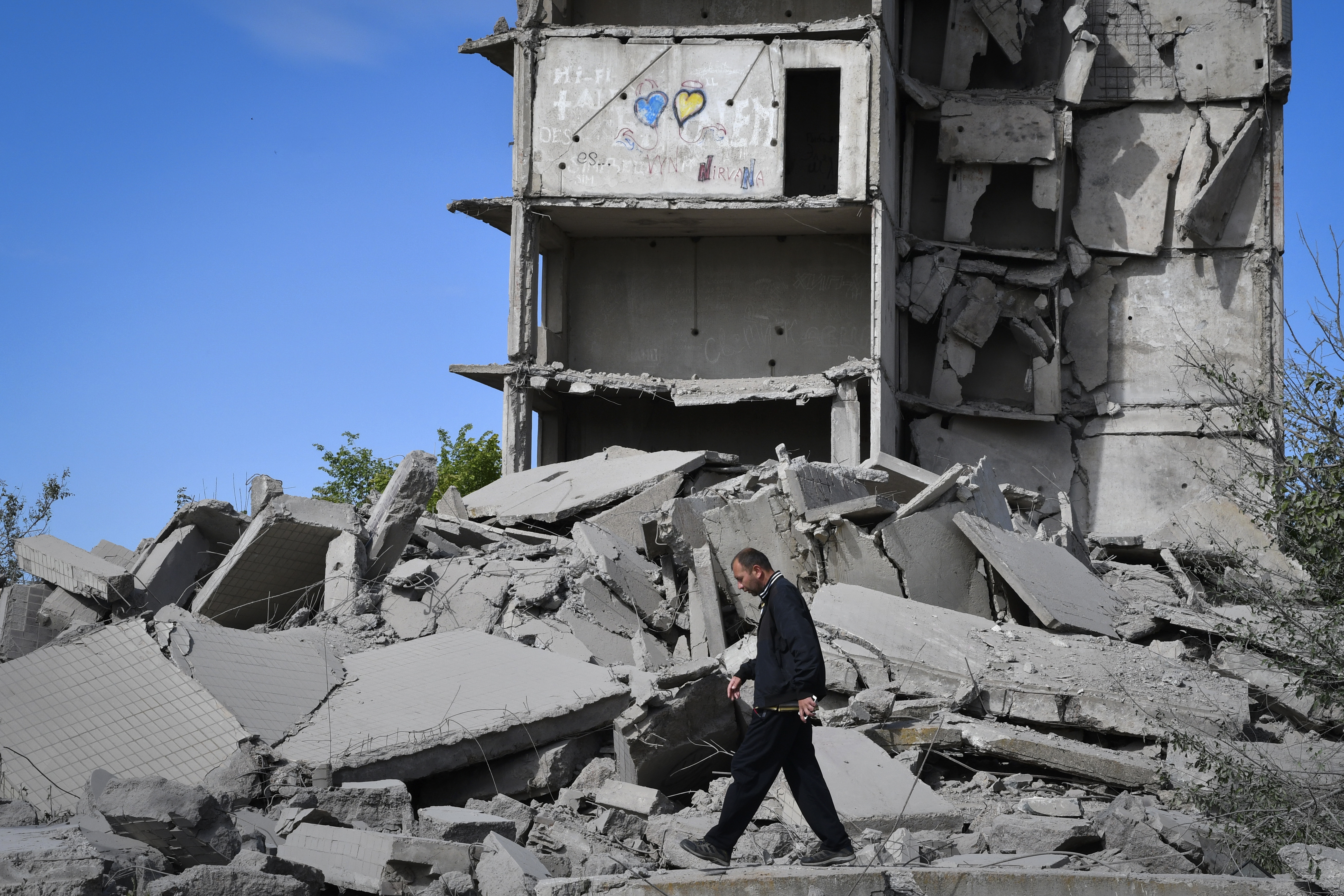 A local resident walks next to a house destroyed in a Russian shelling in Kramatorsk, Ukraine, Wednesday, May 25, 2022. (AP Photo/Andriy Andriyenko) 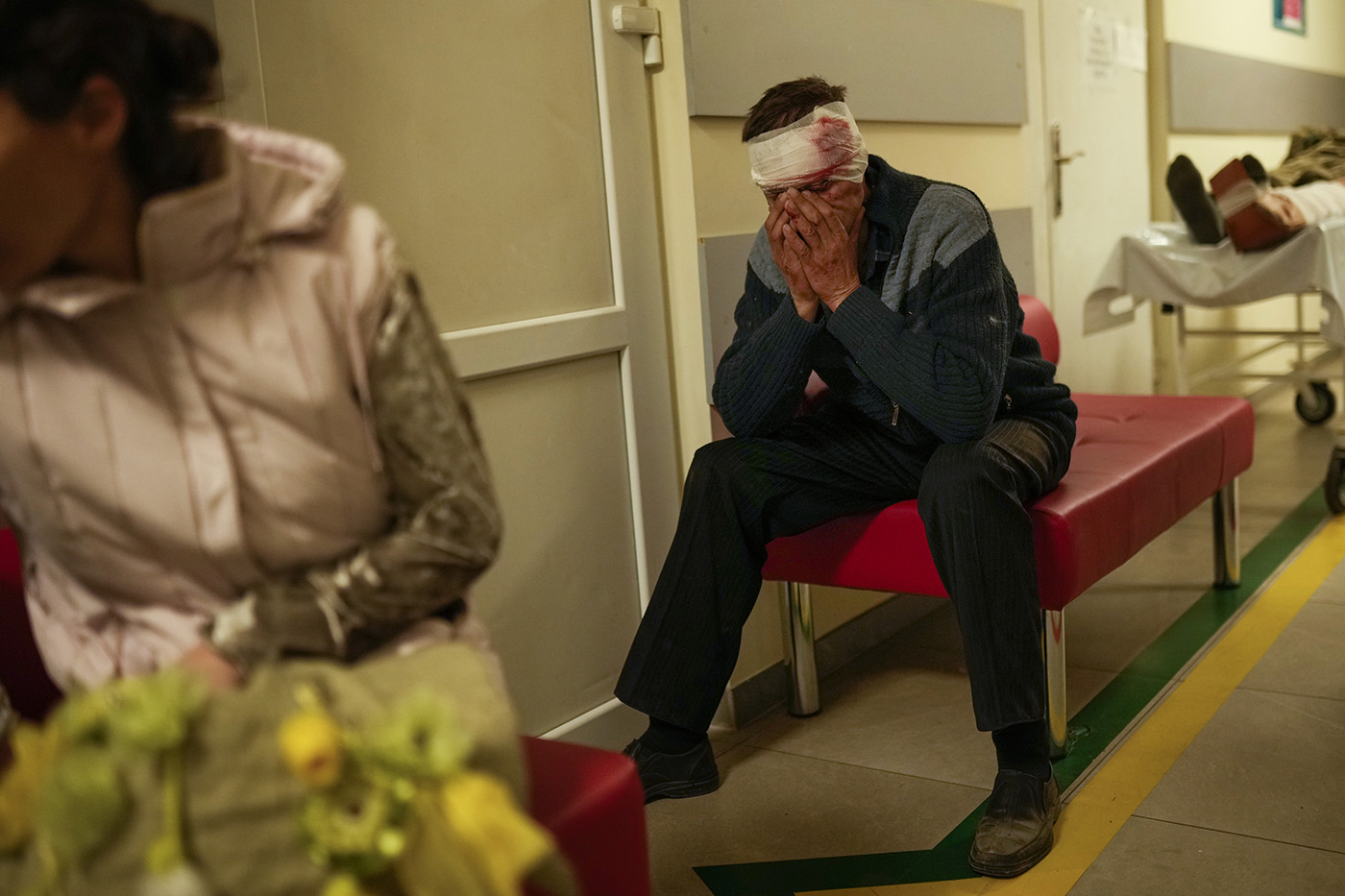 A man injured in a Russian missile strike Wednesday rests in a hospital in Pokrovsk in eastern Ukraine. “There’s no place to live in left. Everything is smashed,” said Viktoria Kurbonova, a mother of two who lived in a house damaged in the attack. (AP/Francisco Seco)