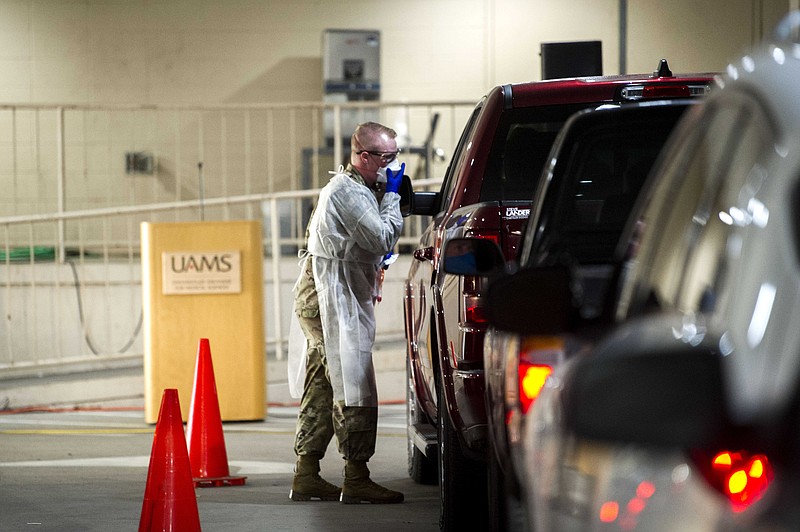 Thomas Cook, with the Arkansas Army National Guard, administers a test for COVID-19 at a drive-thru screening site at UAMS on Tuesday, Jan. 4, 2022. Gov. Asa Hutchinson visited the medical campus to welcome 12 Arkansas National Guard soldiers who are helping with the demand at the drive-thru screening site. See more photos at arkansasonline.com/15uams/..(Arkansas Democrat-Gazette/Stephen Swofford)

The state also posted its largest daily increase in covid-19 deaths in more than a month, with the death toll rising Wednesday by 10, to 11,461.

The number of people hospitalized in the state with covid-19, meanwhile, fell by seven, to 65, its second straight daily decline.

The increase in cases was larger by 115 than the one on Tuesday and by 94 than the one the previous Wednesday.

It was the largest daily increase since March 22 -- a time when the state's new case numbers were inflated by a backlog of reports faxed in weeks earlier, during a surge of infections from the omicron variant -- and the first one since then to top 500.

"The increased number of new cases follows the trends we have been observing since April," State Epidemiologist Mike Cima said in an emailed statement.

He has said the uptick is likely due, at least in part, to a more-contagious version of the omicron variant known as BA.2.12.1.

According to U.S. Centers for Disease Control and Prevention estimates updated Tuesday, the strain accounted for 57.9% of new coronavirus cases nationwide last week, up from 49.4% the previous week.

Cima said Wednesday he didn't "have a good feel for how long this trend will continue," but it was likely to be upward "at least for the near future."

"It seems cases continue to rise in places where these trends began a while ago," he said.

Given the accelerating spread of the virus, however, he said it's "reasonable to expect severe outcomes to increase in the coming days and weeks."

"Based on what I am seeing, it is unlikely to follow the explosive patterns seen in previous waves," Cima said.

"However, we will keep monitoring the ever-evolving situation and adapt accordingly."

The net increase in deaths on Wednesday was the first since April 5 that was in the double-digits.

State Department of Health spokeswoman Danyelle McNeill said a total of 15 deaths were added. Five others were removed from the state's count after it was determined they were unrelated to covid-19.

Of the ones that were added, McNeill said three occurred in December. The other 12 happened within the last month.

Already at its highest level since the week ending March 27, the average daily increase in the state's case count over a rolling seven-day period rose Wednesday to 320.

With new cases outnumbering recoveries, the number of cases in the state that were considered active rose by 283, to 3,536, the largest total since March 4.

It was the biggest one-day jump in the total since January, when it was rising by thousands per day at the height of the original omicron surge.

The number of the state's virus patients who were on ventilators remained for a second day on Wednesday at three, the smallest number since at least March 25, 2020.

The number who were in intensive care fell by six, to nine, reaching a new low for this year. It was the smallest number since at least May 2020.

Also on Wednesday, the state Board of Corrections unanimously approved a memorandum to limit restrictions on visitation to prisons deemed high-risk based on their covid-19 metrics.

At prisons not classified as high-risk, Corrections Secretary Solomon Graves said the memorandum will increase the number of visitors per inmate from two to four depending on the space available. He said the changes will also increase visitation time from one hour to two hours.

"Before the pandemic it was four hours, but with the new measures in place including low cost telephone calls and video visitation we feel like four hours is no longer warranted and the amount of time puts a strain on facility operations," Graves said. "We think two hours is a reasonable compromise in the current climate."

The changes will go into effect the first weekend in June.

"If a facility is not a high-risk, it will be back to normal as much as we can," Graves told the board.

The prison board approved last month a new system that allows Wellpath, the Department of Corrections' health care provider, to look at the case count at facilities to determine where facilities will fall on a weighted risk level. Community risk level, status as an intake facility and number of active cases/positivity rate are all used to determine a facility's risk rating.

Graves said the agency will continue to use scheduled visits. He also said visitors to a high risk facility must take rapid tests as well.

The Health Department's tally of vaccine doses that had been administered rose by 1,636, which was down by more than 800 from the daily increase a week earlier.

About 47% of the most recent increase was from doses classified on the Health Department's online coronavirus dashboard as not having an "available dose number."

The count of doses for people receiving the vaccine for the first time rose by 355, which was smaller by 144 than the increase in first doses a week earlier.

Dropping for the second day in a row, the average number of total doses administered each day over a rolling seven-day period fell to 1,363, which was down from an average of 1,440 a day the previous week.

The average for first doses fell to 309.

According to the CDC, the percentage of Arkansans who had received at least one dose remained Wednesday at 67%, and the percentage who were fully vaccinated remained at 54.7%.

The percentage of those fully vaccinated who had received a booster dose remained at 40.1%.

In the percentage who were fully vaccinated, it remained roughly tied with Tennessee for 46th, ahead of Louisiana, Mississippi, Alabama and Wyoming.

Nationally, 77.8% of people had received at least one dose, and 66.6% were fully vaccinated.

Of the fully vaccinated population nationally, 46.6% had received a booster dose.