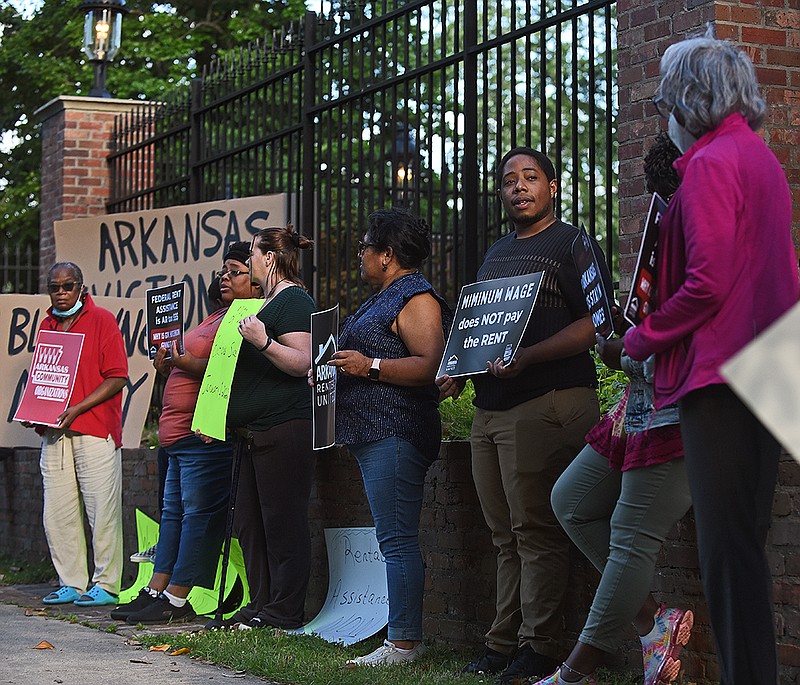 Members of Arkansas Renters United and tenants who are facing or have faced eviction gather in front of the Governor’s Mansion on Thursday to demand Gov. Asa Hutchinson stop refusing federal funds to assist renters. (Arkansas Democrat-Gazette/Staci Vandagriff)

About 20 tenants' rights advocates gathered outside the Governor's Mansion in Little Rock on Thursday evening, chanting "What do we want? Rental assistance! When do we want it? Now!"

Arkansas Renters United organized the protest in light of an Arkansas Democrat-Gazette data analysis, published Sunday, showing that 2,855 evictions were filed in state courts from Jan. 1 to May 20. That's the most evictions filed over that time period in any of the last five years.

In April, Arkansas became one of two states, along with Nebraska, to turn down federal rental assistance funds that would have helped tenants catch up on rent and utility payments after falling behind because of covid-19.

Hutchinson's decision to turn down the money is especially unfair to low-income Arkansans when the costs of groceries and gasoline have been on the rise, activist Redonia Harshaw said at Thursday's protest.

"You want us to live right, but you don't give us the resources to do that," she said. "Some of us work two jobs to stay in our homes. Some of us work two part-time jobs to make a full-time job. It is not fair. ... We are funding a system with our tax dollars that is perpetuating poverty."

That number went up to 2,931 as of Wednesday, Arkansas Renters United wrote in a letter to U.S. Treasury Secretary Janet Yellen, read out loud at the rally by organizer Joyce Jones.

Hutchinson wrote in an April 19 letter to Yellen that he would draw down no more than 39% on the $146 million in federal rental assistance funds offered, giving the state about $60 million.

"We urge you to find a pathway to get all of the funding to the state so that renters who are still recovering from the economic damage created by the pandemic can get the relief they need and avoid eviction," Jones read from the letter.

When asked earlier this month about the state's rise in evictions, Hutchinson said, "The unemployment rate in Arkansas remains at a record low, and it is also lower than the national employment rate. There are economic opportunities available for our citizens who can work."

Rallygoers said that the jobs Hutchinson mentioned are not enough to keep people housed.

Neil Sealy, another rally organizer, said advocates in Northwest Arkansas held a similar protest outside the courthouse in Fayetteville at the same time Thursday.

Arkansas received $173 million in rental assistance funds from the U.S. Treasury in early 2021. The Arkansas Department of Human Services has distributed almost all of that money throughout the entire state, with the exceptions of Benton and Washington counties, which received their own pots of federal money. Pulaski County also had its own program until it distributed all its funds and was absorbed into the state's program.

Samantha Schilling of North Little Rock applied for rent relief from both Pulaski County and the state, but both applications were denied because the programs ran out of money, she said in an interview.

Her doctor forbade her from working because of a back injury, and her attempts to receive disability assistance have been unsuccessful. She and her two children have had to rely on her fiance's income, and they fell behind on rent in 2021, she said.

She has received three eviction notices since August and has not yet been forced to move but fears being separated from her family, she said.

"I don't have the funds to put forth to take care of my family, to keep me in a home where I can make things work, where I can make my family safe," Schilling said during the rally. "How are we supposed to do that without those [rental assistance] funds?"

Harshaw noted that the federal government has sent financial aid to Ukraine, which has been under siege from neighboring Russia since February.

"You can vote in Congress to send millions of dollars overseas to take care of other people, but you don't even take care of home," Harshaw said. "Where is the logic in that?"

The protesters added "Take care of home" to their list of chants. 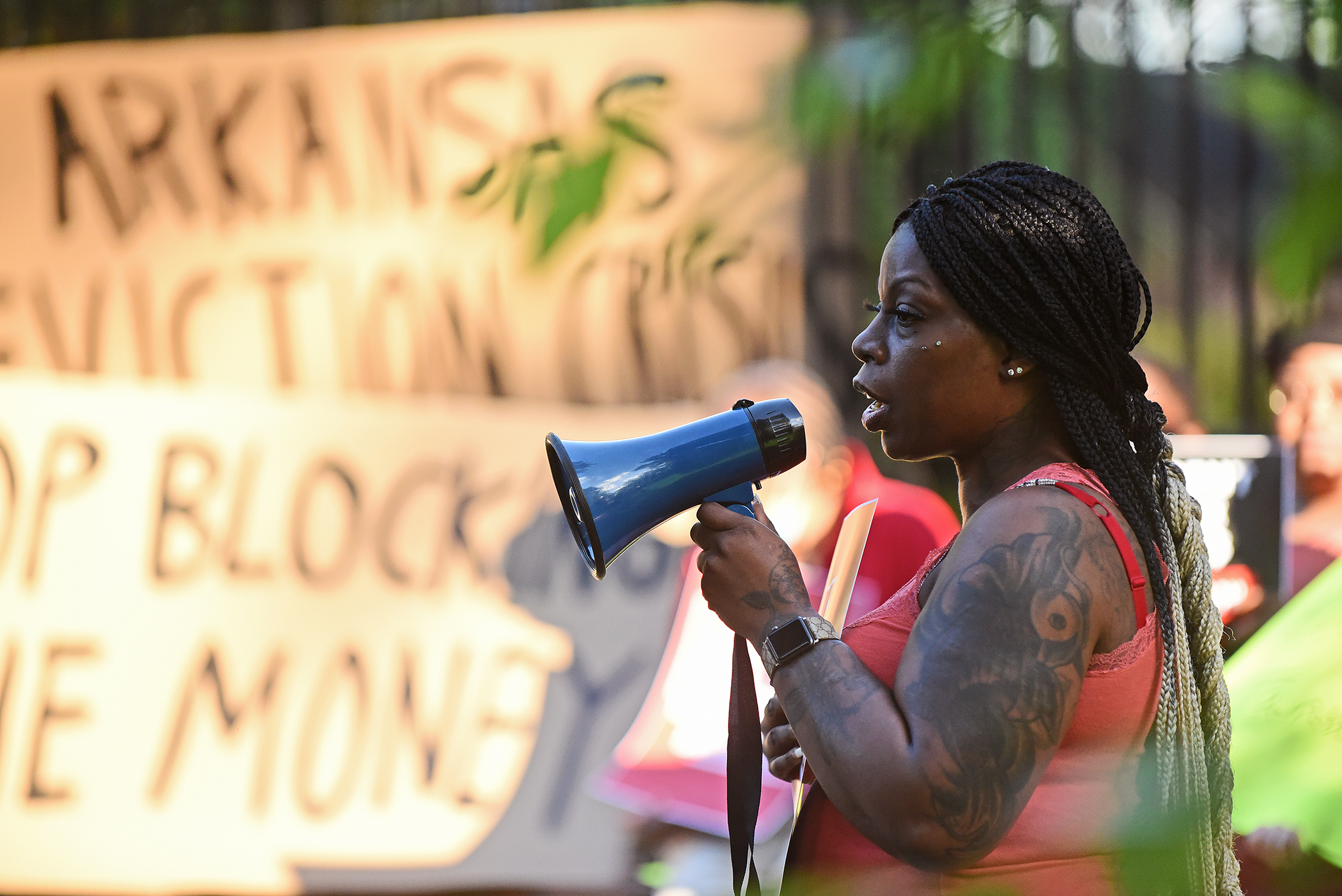 Victoria Booker of Little Rock shares her housing experience during a rally in front of the Governor’s Mansion on Thursday. (Arkansas Democrat-Gazette/Staci Vandagriff)