Judge officially reopens the estate of Mike Disfarmer, the Heber Springs photographer who died in his studio in 1959 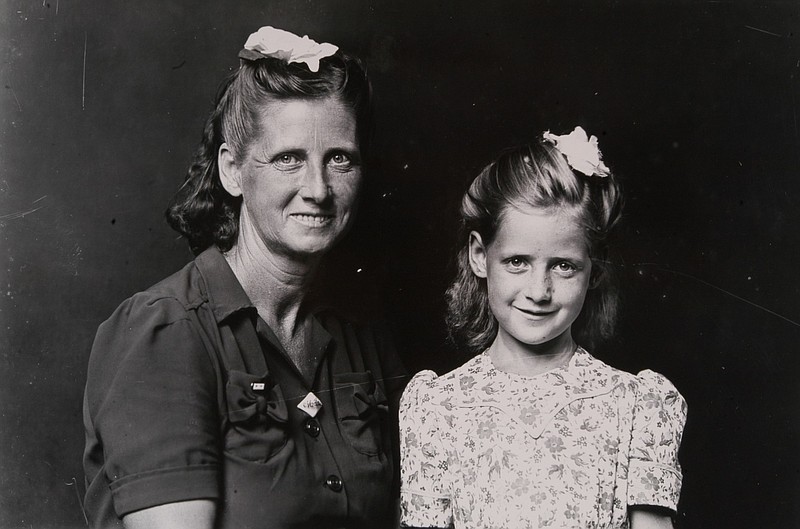 "Esther Trawick and Macie," a photo by Mike Disfarmer, is part of the Arkansas Arts Center's permanent collection.

An order was signed this week officially reopening the estate of Mike Disfarmer, an eccentric photographer who died alone in his Heber Springs photo studio in 1959 at the age of 75. He left no wife, no children and no will.

Since Disfarmer's death, his photographs and glass-plate negatives have become very valuable, and descendants say they don't like the way things have developed.

They say the contents of his studio -- including 4,000 glass negatives -- weren't part of the probate administration of his estate 60 years ago and Disfarmer's copyrights should have been passed down to his descendants, but they weren't. Other people are profiting off their ancestor's art, they argue.

Fred Stewart petitioned the Cleburne County Circuit Court in January 2021 to reopen the estate, and Judge Holly Meyer granted his request -- in a letter dated May 12 and Tuesday with her signature on an order that was drafted by Stewart's attorney, Grant Fortson of Little Rock.

Stewart, who lives near Little Rock, is Disfarmer's great-great-nephew.

In the order signed by Meyer, Fortson wrote: "It is in the best interests of the Estate and the heirs that the Estate be reopened and a special administrator appointed to identify, preserve, protect and distribute any newly discovered property of the Estate. The Court finds that Fred Stewart is a proper person and is fully qualified by law to serve as special administrator of the Estate for the purpose of determining whether undistributed Estate assets exist in the form of negatives and copyrights, asserting any such rights of the Estate as authorized by state and federal law, and distributing any such assets to the heirs of the Decedent."

Having reviewed Fortson's "proposed order," John Tull wrote a letter to the court saying he wants to draft a proposed order of his own to "add additional findings to address other issues which were before the Court."

Tull is the attorney for the Arkansas Museum of Fine Arts Foundation in Little Rock, which received about 3,000 of Disfarmer's glass-plate negatives as a donation in 1977.

There was no filing in the court record late Thursday indicating whether Meyer would grant Tull's request. Tull couldn't be reached for comment on Thursday.

Now, Disfarmer's prints can fetch considerably more than that.

Joe Allbright got a much better deal than that.

Allbright bought everything in Disfarmer's studio at an estate sale in 1959 for $5, according to a brief Tull filed in the case last year. (Allbright would later serve as mayor of Heber Springs, from 1960 to 1966.)

The $5 deposit can be seen as a Dec. 5, 1959, line item on the estate's ledger at Arkansas National Bank in Heber Springs, according to the museum foundation's brief.

Among the 60-year-old court filings, which have been digitized and are available online, there is no list of Disfarmer's assets, which presumably might have mentioned the negatives.

After Disfarmer's death, his younger brother, Charles W. Meyers, petitioned the probate court of Cleburne County to appoint an administrator for Disfarmer's estate, estimating its value to be about $10,000 in personal property, according to Tull's brief.

The probate court appointed U.S. Hensley, then president of Arkansas National Bank, as the estate's administrator, according to the brief. Hensley took possession of Disfarmer's photographic negatives "pursuant to his duties as the administrator of the Estate, and therefore that sale vested the copyrights, if any, in Mr. Allbright," according to Tull.

"Buel Hensley distributed the Estate to the heirs in checks payable to each and the probate court closed the Estate on December 19, 1961," according to Tull.

In an interview last year, Peter Miller said he bought the negatives from Allbright in the early 1970s for $5.

Miller, who was editor of The Arkansas Sun newspaper in Heber Springs, published old photographs in the paper under the headline "Someday Your Prints Will Come." Allbright provided a few Disfarmer photos for Miller to use in his newspaper in the early 1970s.

Miller, a Little Rock lawyer who now lives in South Carolina, said bacteria was eating away at the animal-gelatin emulsion on the negatives.

Miller promised Allbright that he would restore the negatives. He contacted Kodak and the company invited him to Rochester, N.Y., to learn the restoration process. Miller said he made the trip and stayed there for a few days.

Restoring the negatives was a tedious, yearlong procedure, he said.

Many of the negatives were beyond repair. Miller managed to save about 3,000 of them.

He sent some Disfarmer photos to Julia Scully, the editor of Modern Photography magazine in New York City. She published them in the magazine in 1973 and arranged for a museum show in New York.

Later, Scully and Miller worked together on the 1976 book "Disfarmer: The Heber Springs Portraits."

Originally from New York and with a background in photography, Miller was affiliated with The Group Inc., a commune that grew out of the Dan Blocker Singers, named for the man who played Hoss on the television show "Bonanza," according to the Encyclopedia of Arkansas.

Disenchanted with life in Hollywood, The Group moved to Arkansas in 1968 and established a number of successful businesses over the years, including the internet service provider Aristotle Inc., according to the encyclopedia article.

Miller said the negatives he saved dated from about 1938-47. He said Disfarmer made contact prints from the 3x5-inch glass negatives, which would basically be postcard size.

When asked for access to any sort of donation acknowledgement letter from the Foundation to Miller, Malina Tabor, a spokesperson for the museum, said if such a letter exists, it wouldn't be a public document.

On Thursday, Miller said he knew of no estimate of the value of the negatives.

"I do know that because of their fragility, the Arts Center has taken extremely careful steps to preserve them," he said referring to the Arkansas Musuem of Fine Arts Foundation.

According to Tull's brief, Disfarmer's estate went through probate court with the $18,146.80 he had in Arkansas National Bank being divvied up -- after claims, taxes and fees were paid -- between his three surviving siblings and the children of his other three siblings.

In his petition, Stewart said Disfarmer was the "sole owner of the copyrights" of his photographs at the time of his death, and those rights should have been passed on to his heirs.

Meyer granted his request to reopen the estate.

"The Petitioner asserts that estate assets (copyrights) have recently been discovered and the state should be authorized to litigate its interest in same," Meyer wrote in her May 12 letter to Tull and Fortson. "This court has studied the underlying claim but is not able to rule on the ultimate merits of a claim that is not yet even filed. The Museum's disputed assertion that the claim is without merit is not a cause to deny reopening the estate."