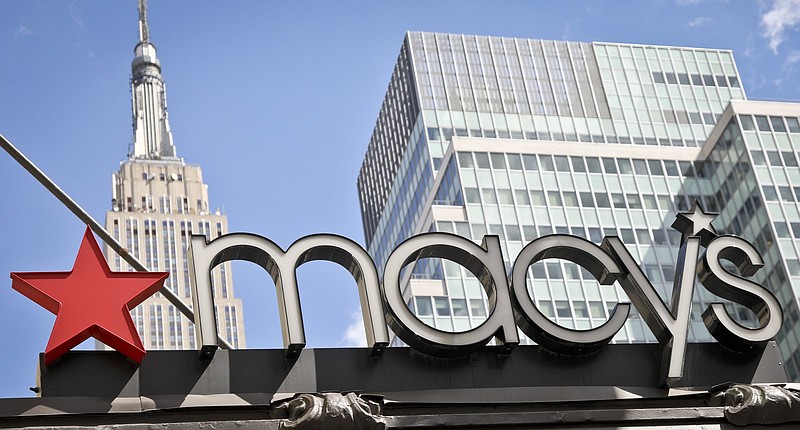 Macy’s corporate signage marks the chain’s flagship store in New York in this 2017 file photo. Macy’s said that it earned $286 million, or 98 cents per share, for the three-month period that ended April 30. (AP)

The performance, announced Thursday, was among the few bright spots in a pile of reports from retailers that showed the impact of rising costs for everything from labor to shipping. Macy's, along with others, is also adjusting to quickly changing shopping behavior as consumers go back to the office and resume normal lives. They're going out to restaurants and doing more activities while buying less stuff that focuses on the home.

Such factors flummoxed a number of retailers. Department store chain Kohl's cut its annual earnings and sales forecast last week. It noted that some shoppers are trading up to premium brands, while others are trading down to lower-priced private-label items. And mall-based teen clothing retailer Abercrombie & Fitch posted a first-quarter loss and cut its outlook on Tuesday.

Target reported last week that its profit tumbled 52% from last year. The chain said a lightning quick return by consumers to more normalized spending left it with bloated inventory of items including TV sets that must be marked down to sell. Target's quarterly financial report comes a day after shares of rival Walmart tumbled about 17% for similar reasons after its earnings report. Both companies missed profit expectations by a wide margin.

Macy's said its shoppers in all income tiers, including those with household incomes under $75,000, increased their spending, though inflation is putting more financial pressure on the lower-income customer. During a call with The Associated Press on Thursday, Macy's Chief Executive Officer Jeff Gennette said that the chain is noticing that the consumer is still buying prestige fragrances as gifts for holidays like Mother's Day. But for clothing purchases for themselves, the low-income shopper is trading down to its off-price business, Backstage.

Macy's also noted that while credit card revenue exceeded its expectations for the quarter, it continues to expect inflation to outpace wage growth and weigh on consumer health -- and that will lead to higher bad debt. That's a reversal from the last year when consumers were flush with cash.

Gennette said higher-income shoppers continue to spend at a healthy pace, but the company's upscale Bloomingdale's chain is monitoring indicators such as interest rates and stock market volatility.

Neil Saunders, managing director of GlobalData Retail, said that Macy's portfolio of businesses from Bloomingdale's to Backstage and wide range of prices will be a "significant advantage over the next year or so as consumer behavior polarizes." He noted that with good planning, Macy's can flex to take advantage of differences in the trading across various shopper groups and categories. That advantage, he believes, is why Macy's outlook has not deteriorated as much as those of other retailers.

Overall, Gennette said Macy's saw a faster-than-expected shift away from items that were in hot demand during the pandemic like home accessories, activewear, casual clothing and more toward dress-up clothes, Macy's sweet spot. That shift contributed to an increase in foot traffic at Macy's stores as consumers are more likely to shop in person for occasion-based clothing. But it also meant that Macy's was caught with too many items that are seeing demand wane and must be marked down.

Sales at stores opened at least a year rose 12.4% for the quarter. The figure includes business from licensed owned businesses like cosmetics.

Macy's reiterated its sales outlook for the year of flat to an increase of 1%, compared with last year.