U.K. slams ‘weaponizing’ of hunger; Ukraine wary of reopened shipping by RICARDO MAZALAN AND ELENA BECATOROS THE ASSOCIATED PRESS | May 27, 2022 at 6:51 a.m. 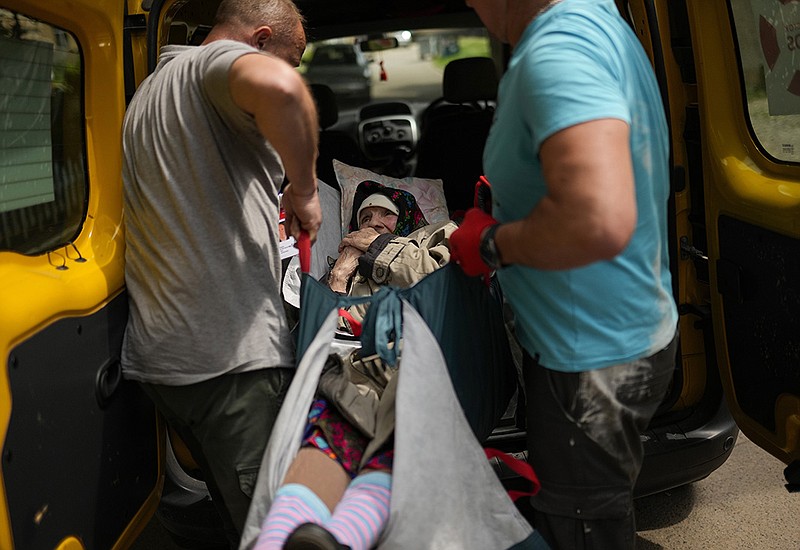 Volunteers of the Vostok SOS charitable organization carry a woman from her home Thursday in Kramatorsk in eastern Ukraine during an evacuation effort. Residents in villages and towns near the front line continue to flee as Russia presses its offensive in several parts of the Donbas region. More photos at arkansasonline.com/ukrainemonth4/. (AP/Francisco Seco)

KYIV, Ukraine -- Moscow pressed the West on Thursday to lift sanctions against Russia over the war in Ukraine, seeking to shift the blame for a growing food crisis that has been worsened by Kyiv's inability to ship millions of tons of grain and other agricultural products while under attack.

Britain immediately accused Russia of "trying to hold the world to ransom," insisting there would be no sanctions relief, and a top U.S. diplomat blasted the "sheer barbarity, sadistic cruelty and lawlessness" of the invasion.

Russian President Vladimir Putin told Italian Prime Minister Mario Draghi that Moscow "is ready to make a significant contribution to overcoming the food crisis through the export of grain and fertilizer on the condition that politically motivated restrictions imposed by the West are lifted," according to a Kremlin readout of the call.

Ukraine is one of the world's largest exporters of wheat, corn and sunflower oil, but the war and a Russian blockade of its ports have halted much of that flow, endangering world food supplies. Many of those ports are now also heavily mined.

Russia also is a significant grain exporter, and Kremlin spokesman Dmitri Peskov said the West "must cancel the unlawful decisions that hamper chartering ships and exporting grain." His comments appeared to be an effort to lump the blockade of Ukrainian exports with what Russia says are its difficulties in moving its own goods.

Western officials have dismissed those claims. U.S. Secretary of State Antony Blinken noted last week that food, fertilizer and seeds are exempt from sanctions imposed by the U.S. and many others -- and that Washington is working to ensure countries know the flow of those goods should not be affected.

With the war grinding into its fourth month, world leaders have ramped up calls for solutions. World Trade Organization Director-General Ngozi Okonjo-Iweala said about 25 million tons of Ukrainian grain is in storage and another 25 million tons could be harvested next month.

European countries have tried to ease the crisis by moving grain out of the country by rail -- but trains can carry only a small fraction of what Ukraine produces, and ships are needed for the bulk of the exports.

At the same time, the Russian Defense Ministry proposed corridors to allow foreign ships to leave ports along the Black Sea, as well as Mariupol on the Sea of Azov.

Mikhail Mizintsev, who heads Russia's National Defense Control Center, said 70 foreign vessels from 16 countries were in six ports on the Black Sea, including Odesa, Kherson and Mykolaiv. He did not specify how many might be ready to carry food.

Ukrainian Foreign Minister Dmytro Kuleba said his country was ready to agree on safe corridors in principle, but it was not sure it could trust Russia to allow safe passage and not send its military vessels "sneaking" into the harbor to attack Odesa.

British Foreign Secretary Liz Truss said Putin was "trying to hold the world to ransom" by demanding some sanctions be lifted before allowing Ukrainian grain shipments to resume.

"He's essentially weaponized hunger and lack of food among the poorest people around the world," Truss said. "What we cannot have is any lifting of sanctions, any appeasement, which will simply make Putin stronger in the longer term."

Ukrainian President Volodymyr Zelenskyy called for imposing even tougher sanctions on Russia, including for the European Union to ban Russian oil and gas.

"Pressuring Russia is literally a matter of saving lives," he said in his nightly video address. "And every day of delay, weakness, various disputes or proposals to appease the aggressor at the expense of the victim is new Ukrainians killed. And these are new threats to everyone on our continent."

Putin said "it's impossible, utterly unrealistic in the modern world" to isolate Russia. Speaking via video to members of the Eurasian Economic Forum, which is comprised of several ex-Soviet nations, he said those who try would "primarily hurt themselves," citing broken food supply chains.

Michael Carpenter, the U.S. ambassador to the Organization for Security and Cooperation in Europe, urged its members to provide Ukraine with what it needs to defend itself against Putin's "revanchist delusions."

On the battlefield, Russian forces pressed their offensive in several parts of the eastern Donbas region, Ukraine's military said. That industrial heartland of coal mines and factories is now the focus of fighting after Russia suffered a series of setbacks and shifted to more limited goals.

"The enemy is storming the position of our troops simultaneously in several directions," said Ukrainian Deputy Defense Minister Hanna Maliar. "We have an extremely difficult and long stage of fighting ahead of us."

Kharkiv, Ukraine's second-largest city, also came under renewed shelling on Thursday. Zelenskyy said at least nine people were killed and 19 wounded. Among those killed were a 5-month-old baby and its father, and the mother was in serious condition.

Military officials said Russian forces continued to try to gain a foothold in the area of Sievierodonetsk, the only part of the Luhansk region in the Donbas under Ukrainian government control.

A senior U.S. defense official said Russia is making incremental progress in the Donbas, with fighting centered on towns and villages as Russian and Ukrainian forces trade control over scraps of land. The official said those smaller artillery duels could be prolonged.

Russia has 110 battalion tactical groups, each with 800 to 1,000 troops, committed to Ukraine, amounting to 80% of Moscow's total force, the official said, adding that it has lost 1,000 tanks and three dozen fighter jets and other fixed-wing aircraft.

And Alexander Lukashenko, the leader of Russian ally Belarus, said he was sending troops to the border with Ukraine, raising the possibility that he may agree to wider participation in the war. Belarus allowed Russian troops to invade Ukraine from its soil but has not taken part in ground operations.

Zelenskyy pleaded with the West to send multiple launch rocket systems to Ukraine as soon as possible to give it a fighting chance against the Russian offensive in the Donbas.

Meanwhile, in the ravaged port city of Mariupol, Russia began broadcasting state television news, about a week after the Russian military declared it had "completely liberated" the city.

A leader of Russia-backed separatists suggested there might be more Ukrainian fighters hiding in Mariupol's sprawling Azovstal steelworks, which for weeks stood as the city's last bastion of resistance. The Russian military says 2,439 fighters surrendered from the plant earlier this month. The separatist leader, Denis Pushilin, said more may have been hiding or lost or lagged behind, adding "there are already those that have been found" and captured.

Information for this article was contributed by Andre Rosa and Lolita C. Baldor of The Associated Press. 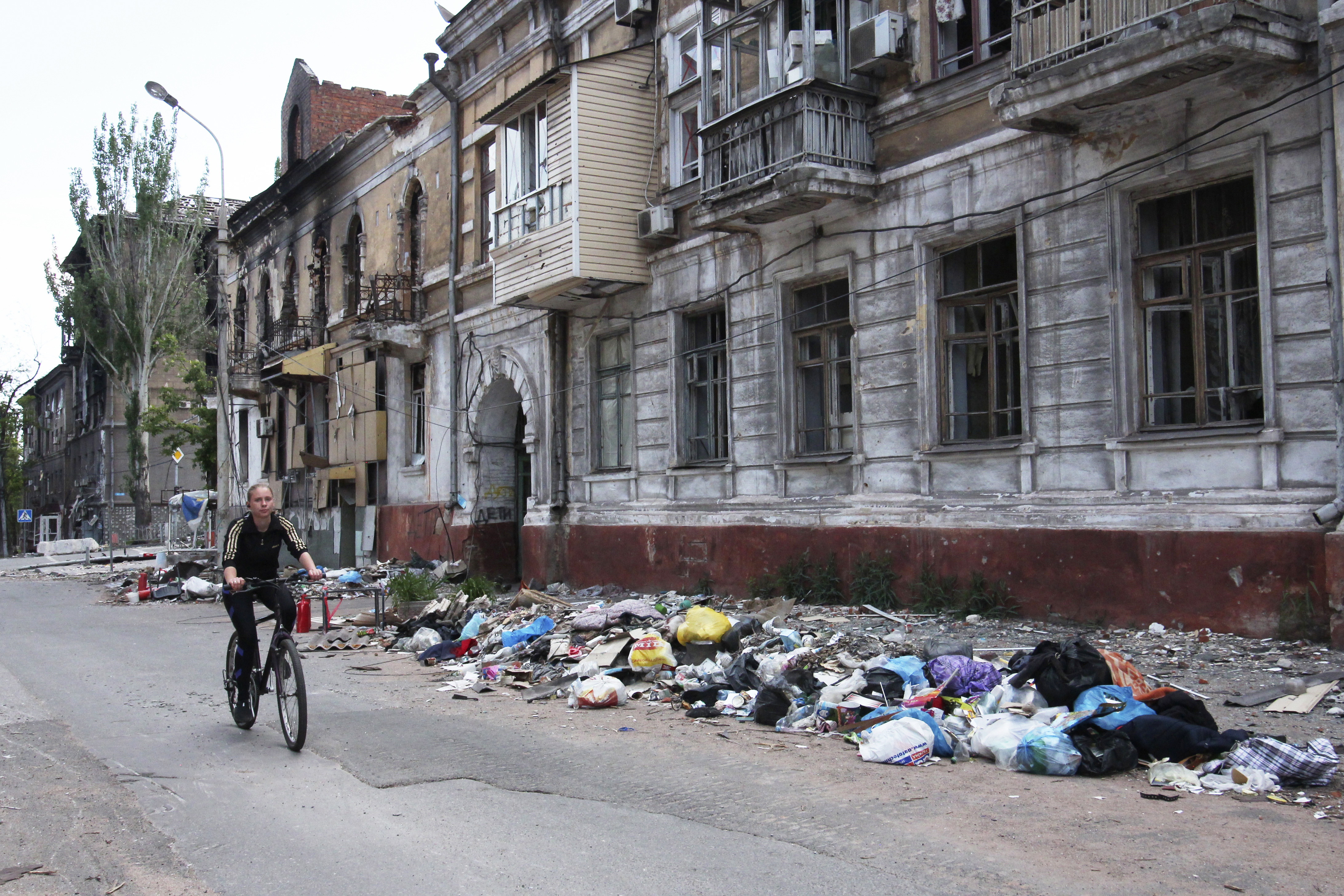 A woman rides a bike past a building damaged during fighting in Mariupol, in territory under the government of the Donetsk People's Republic, eastern Ukraine, Wednesday, May 25, 2022. (AP Photo) 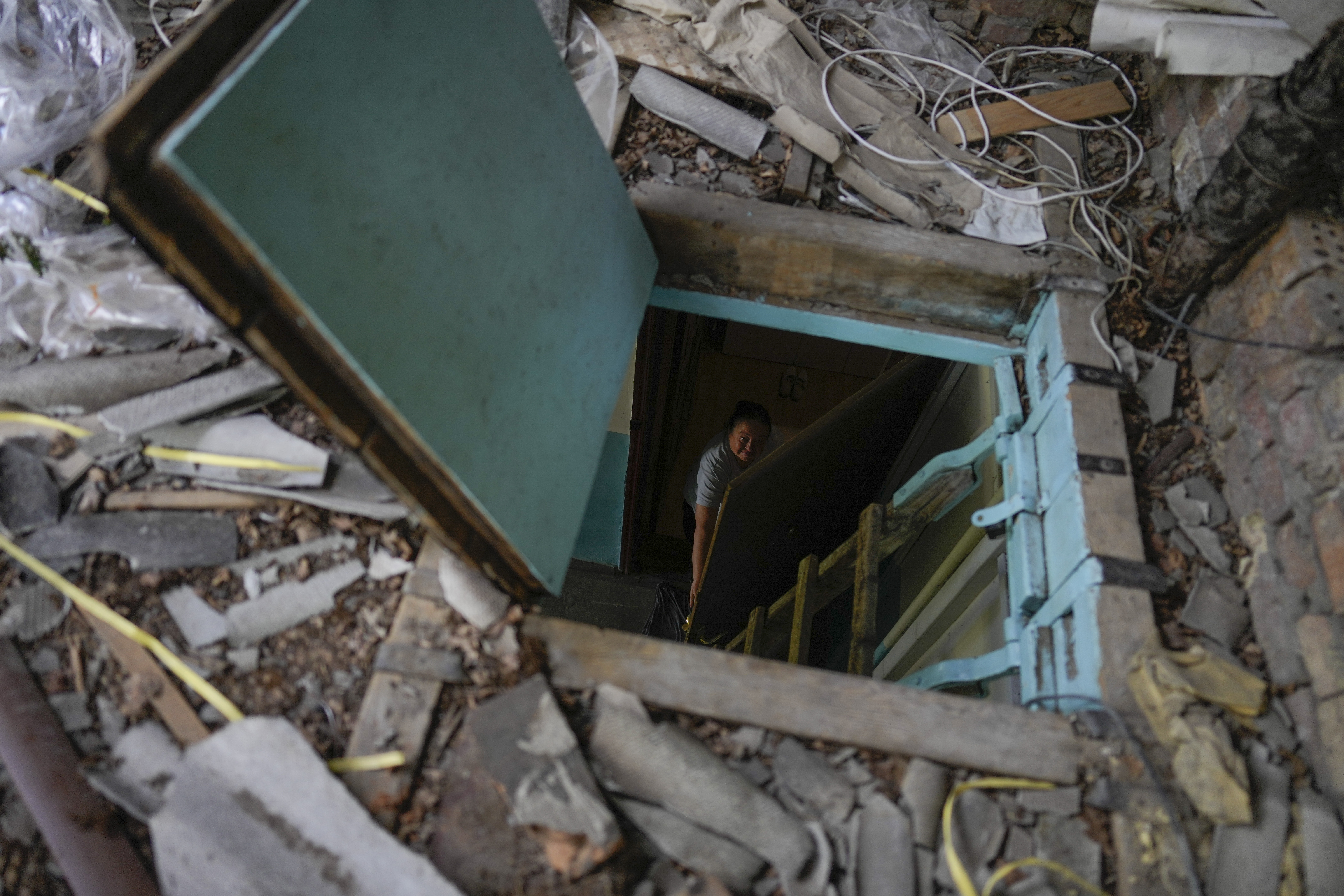 Liudmyla Voronina opens a skylight window on the roof of her house roof as she stands inside her home that was damaged by attacks in Irpin, on the outskirts of Kyiv, Ukraine, Thursday, May 26, 2022. Voronina lives alone now fearing new attacks or that the roof will fall on her. She used to live with her son and grandchildren, but she does not consider it a safe place for them.(AP Photo/Natacha Pisarenko) 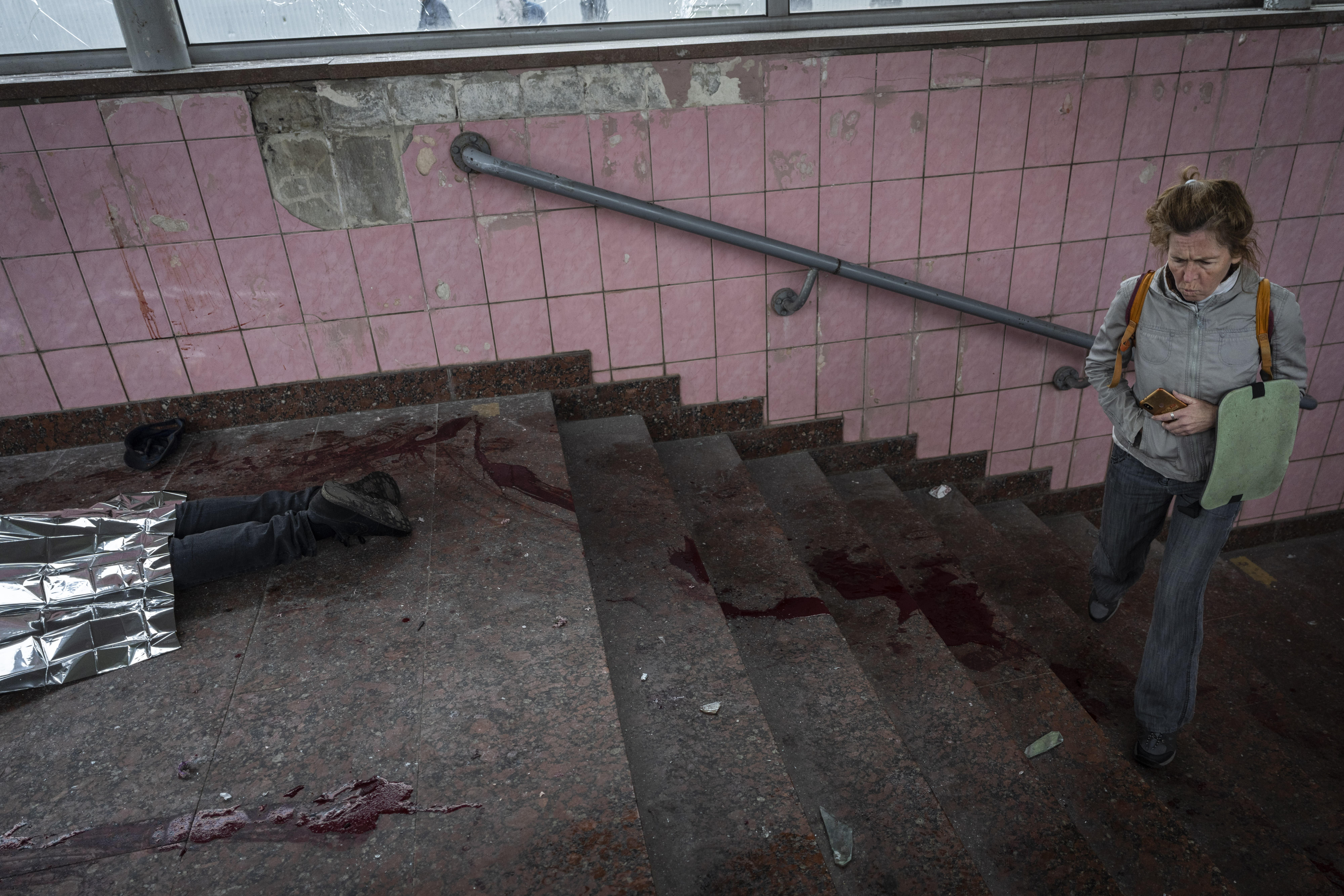 A woman walks next to the body of a man killed during shelling in Kharkiv, eastern Ukraine, Thursday, May 26, 2022. (AP Photo/Bernat Armangue) 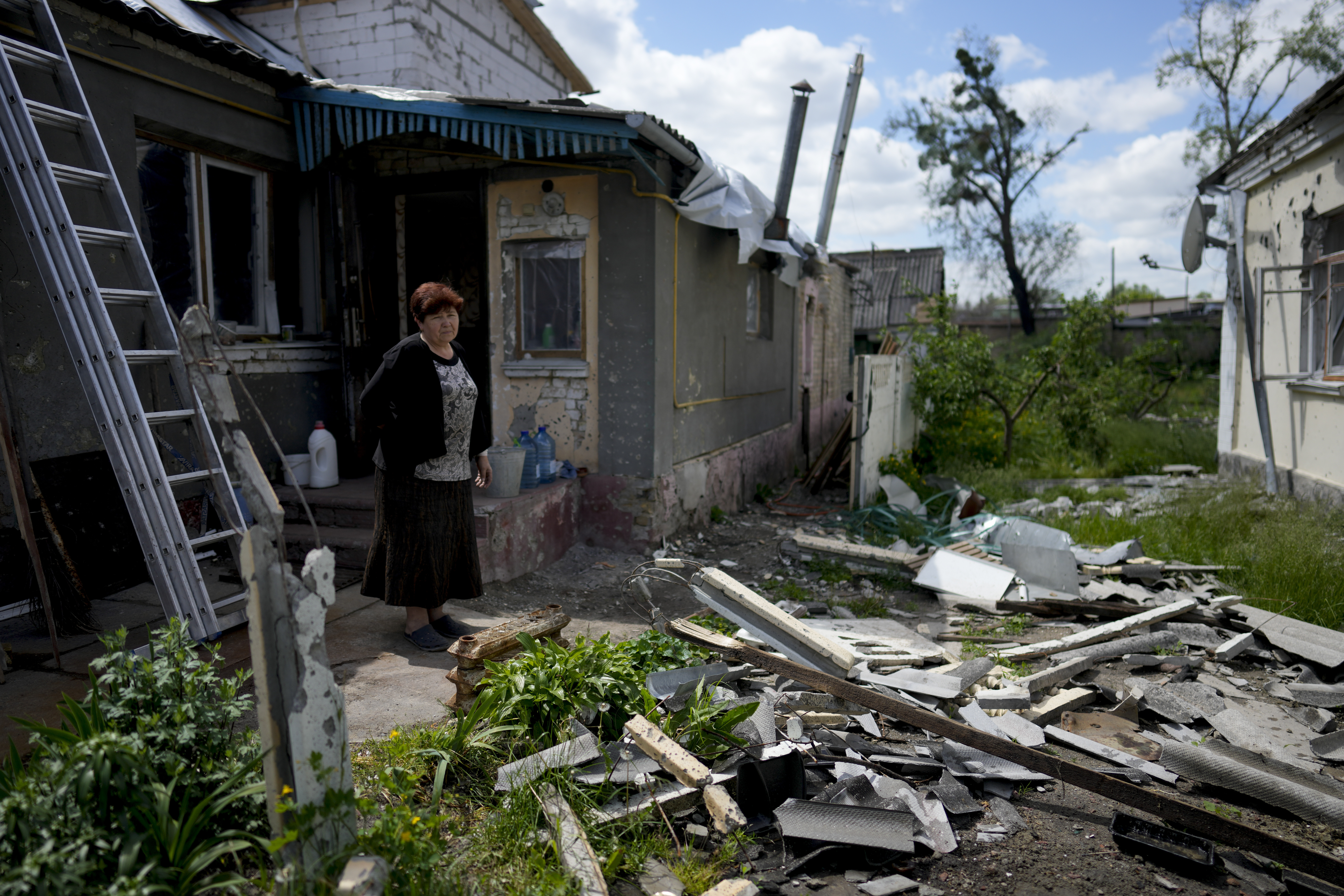 Nataliia Fedorova stands outside her home ruined by attacks, in Irpin, on the outskirts of Kyiv, Ukraine, Thursday, May 26, 2022.(AP Photo/Natacha Pisarenko) 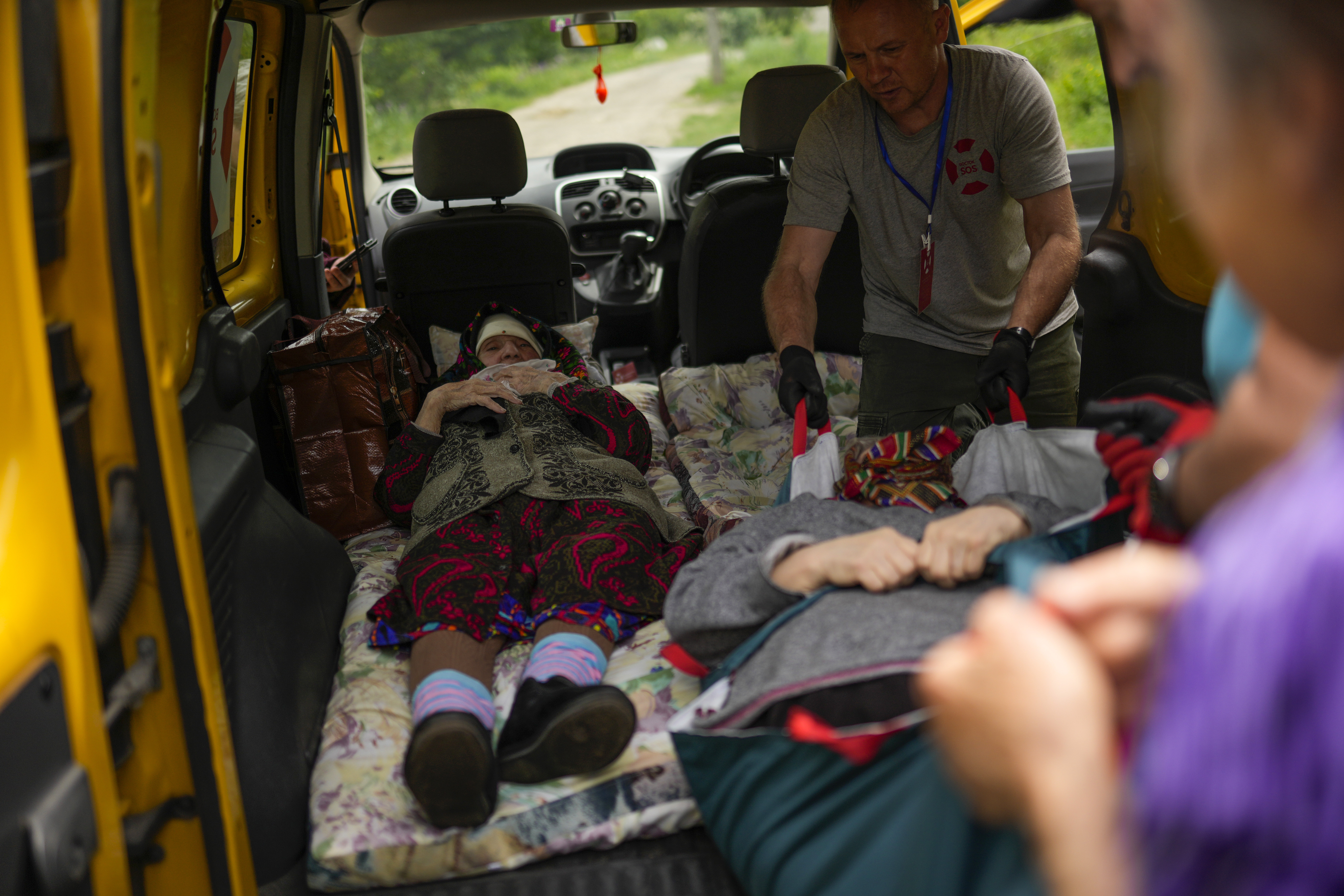 Women are evacuated by volunteers of Vostok SOS charitable organisation in Kramatorsk, eastern Ukraine, Thursday, May 26, 2022. Residents in villages and towns near the front line continue to flee as fighting rages in eastern Ukraine. (AP Photo/Francisco Seco) 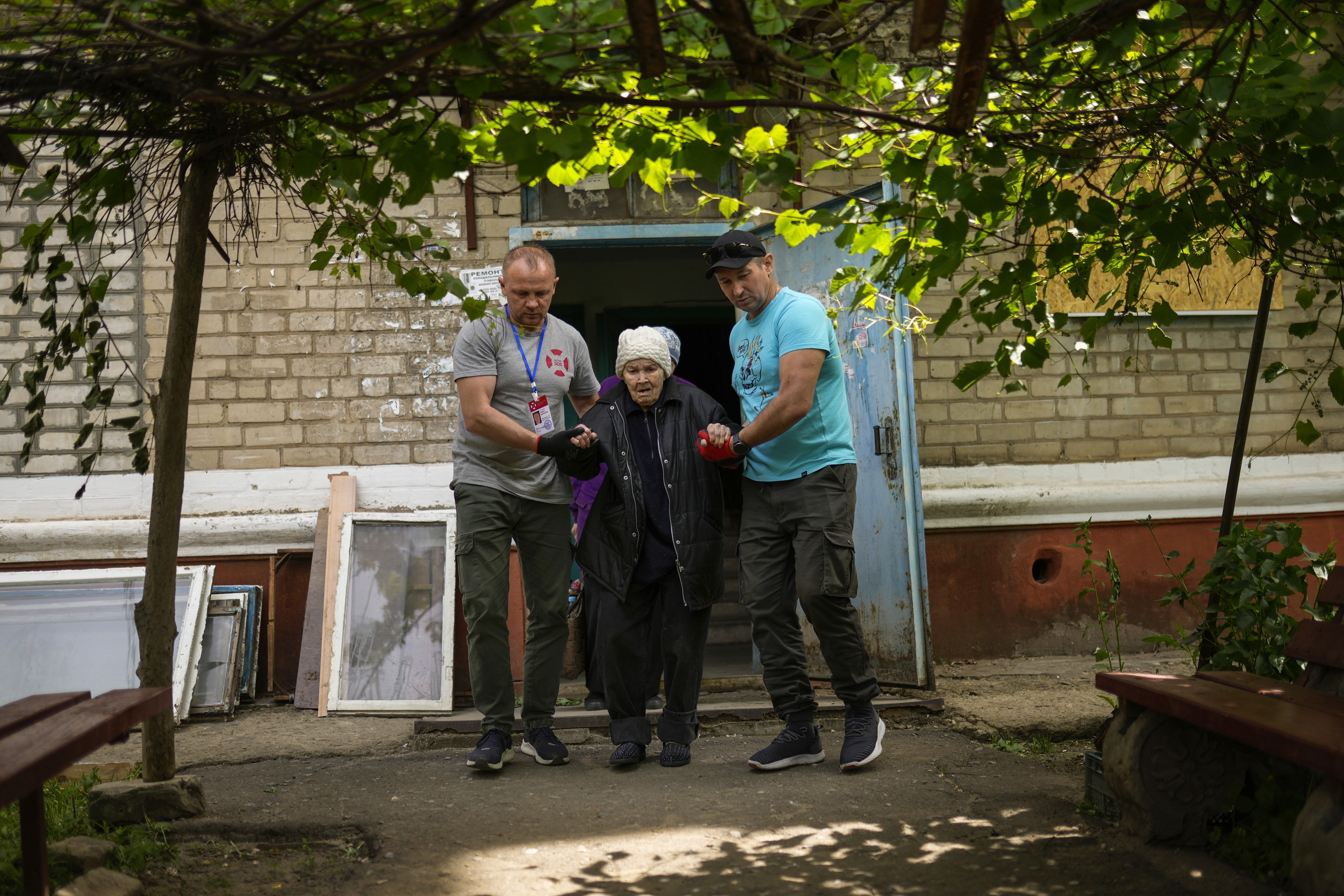 A woman is evacuated by volunteers of Vostok SOS charitable organisation in Kramatorsk, eastern Ukraine, Thursday, May 26, 2022. Residents in villages and towns near the front line continue to flee as fighting rages in eastern Ukraine. (AP Photo/Francisco Seco) 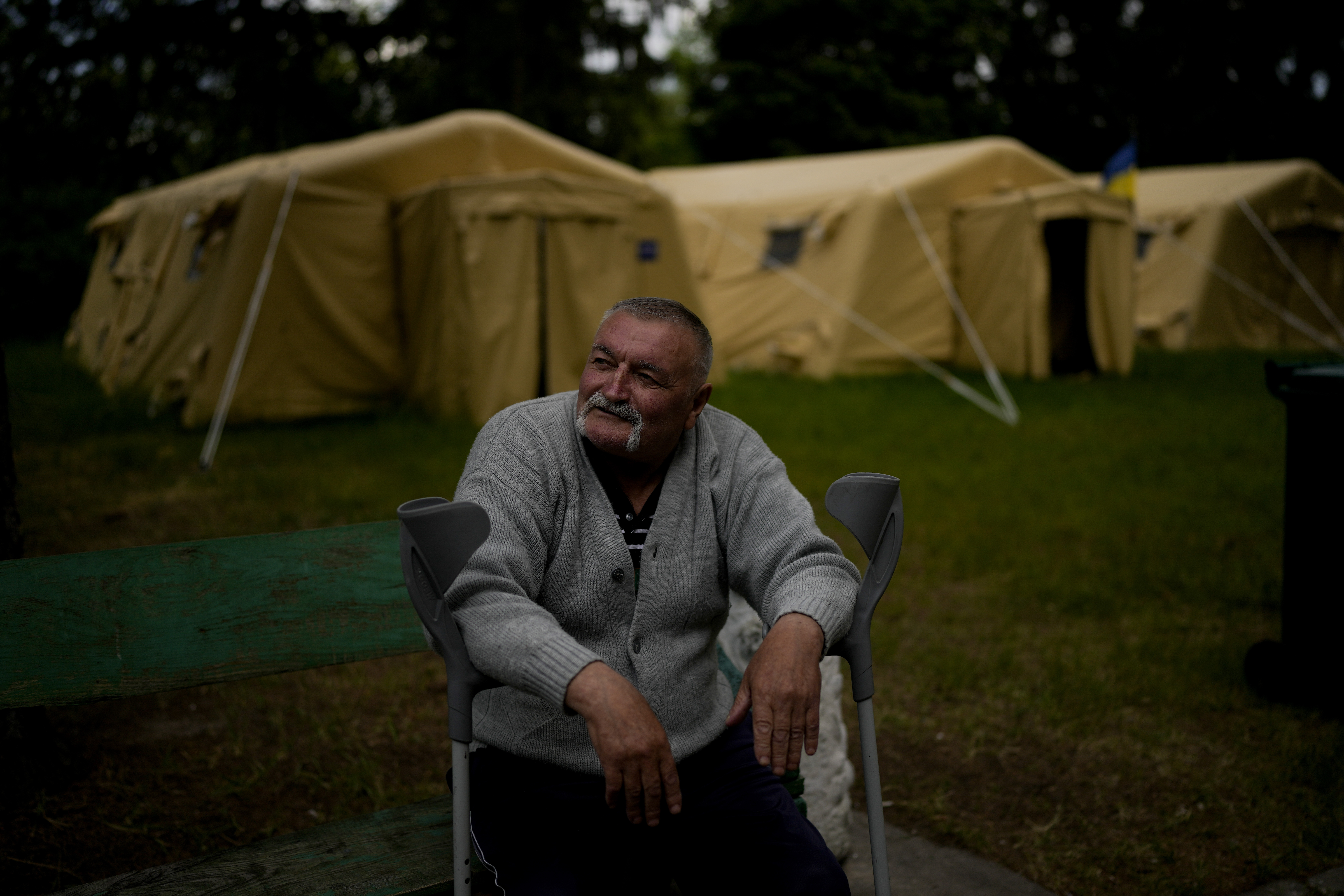 Mykola Kovalenko, who lost his home during the Russian invasion, rests outside at a Sanatorium working as temporary place for people without a home Irpin, outskirts Kyiv, Ukraine, Thursday, May 26, 2022. (AP Photo/Natacha Pisarenko) 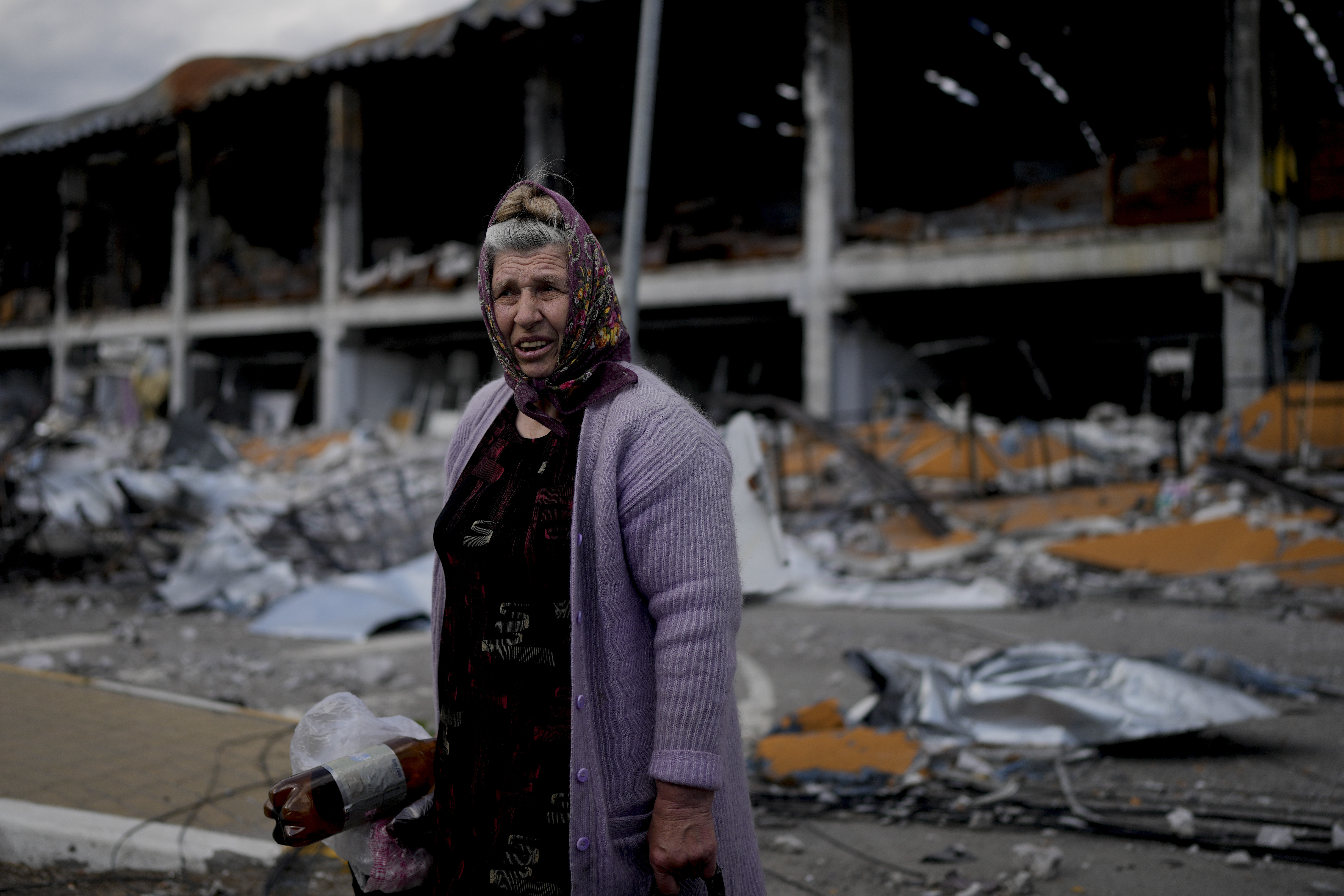 A woman stands in front of a damage building ruined by attacks in Irpin, outskirts Kyiv, Ukraine, Thursday, May 26, 2022. (AP Photo/Natacha Pisarenko) 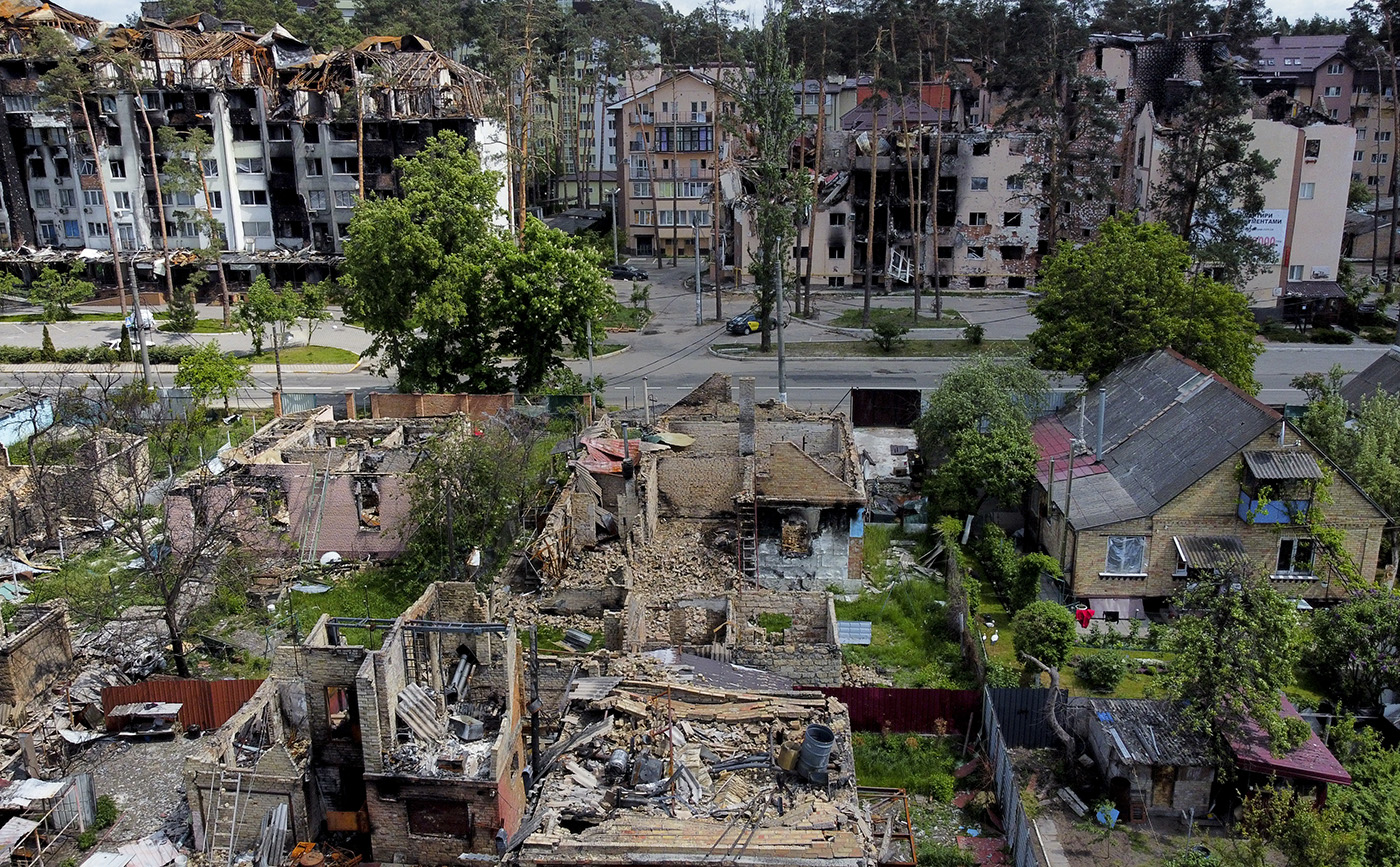 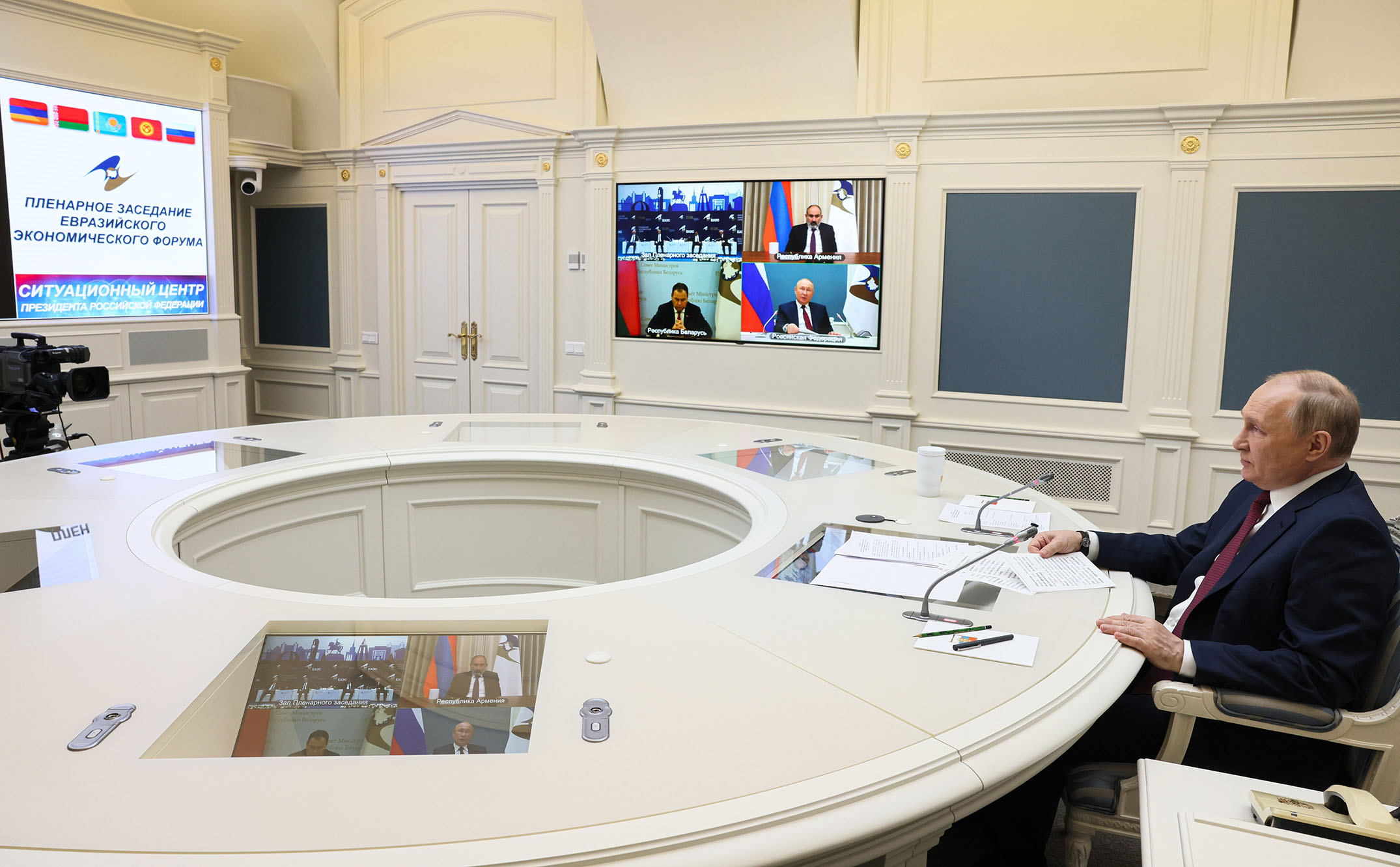 Russian President Vladimir Putin speaks in a video call Thursday in Moscow with members of the Eurasian Economic Forum, which is composed of several ex-Soviet nations. Putin said countries that try to isolate Russia would “primarily hurt themselves.” (AP/Sputnik/Mikhail Metzel) 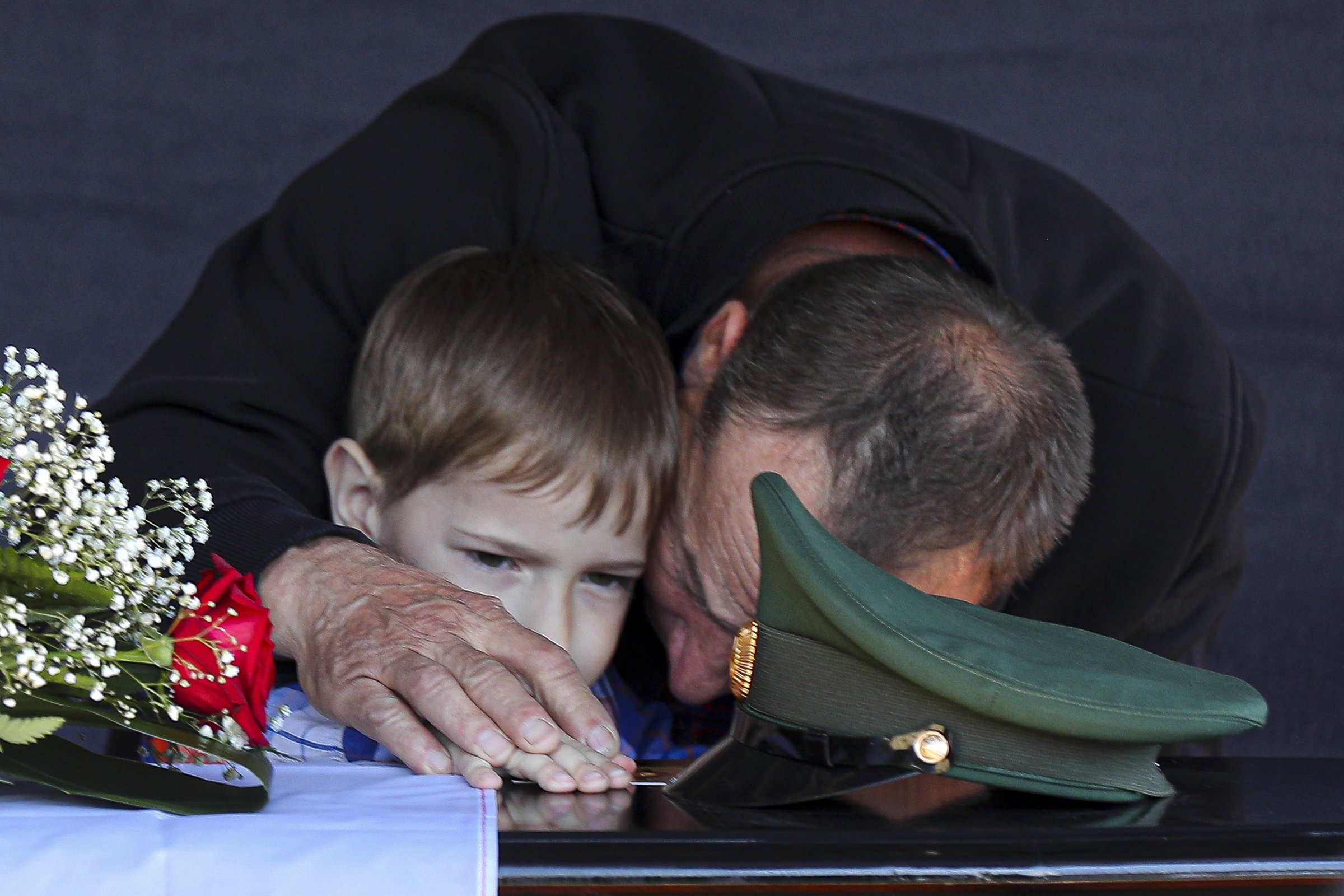 The father and the son of Russian army Sgt. Daniil Dumenko, 35, who was killed during fighting in Ukraine, mourn during a memorial Thursday in his homeland in Volzhsky, outside Volgograd, Russia. (AP)