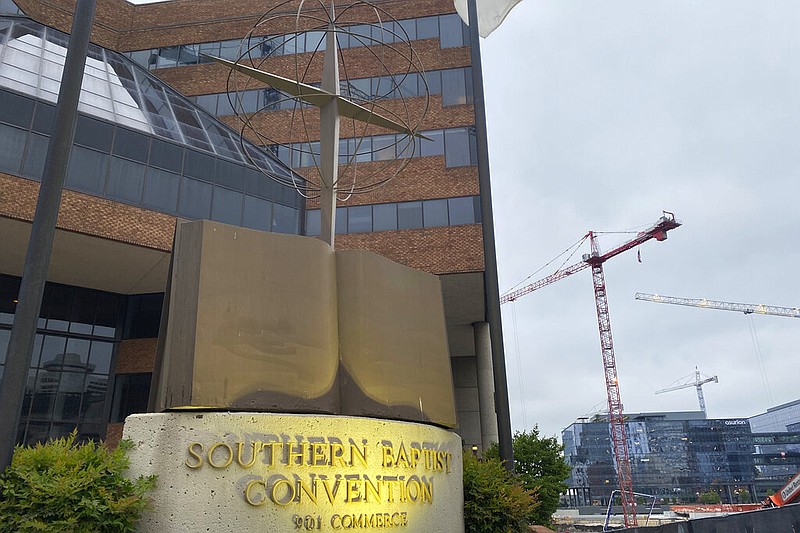 A cross and Bible sculpture stand outside the Southern Baptist Convention headquarters in Nashville, Tenn., on Tuesday, May 24, 2022. (AP/Holly Meyer)

The information was made public four days after the release of a 288-page independent report detailing previous denominational efforts to discredit accusers and to derail reform efforts.

The list of alleged abusers, posted at sbc.net/satf/ shortly before 9 p.m., was 205 pages long and included at least 10 Baptist workers with Arkansas ties.

Labeled "highly confidential," the list was characterized on the first page as "a fluid, working document ... which is NOT to be published."

A joint written statement, issued by SBC Executive Committee chairman Rolland Slade and SBC Executive Committee interim President/CEO Willie McLaurin, said the list was being made public for the first time "as an initial, but important, step towards addressing the scourge of sexual abuse and implementing reform in the Convention."

"Each entry in this list reminds us of the devastation and destruction brought about by sexual abuse. Our prayer is that the survivors of these heinous acts find hope and healing, and that churches will utilize this list proactively to protect and care for the most vulnerable among us," the two leaders stated.

"Our God invites us to do justice, love mercy and walk humbly with God," Slade and McLaurin said, citing the words of Micah 6:8.

"It is our hope that releasing this list places a spotlight on truth and transparency. Southern Baptists have made it clear that transparency in the area of sex abuse should be the norm," they wrote.

Noting that the list had been compiled by a former executive committee employee, Slade and McLaurin said they were releasing it "in the exact form that it was provided to Guidepost Solutions."

"We have not made any additions to the list, nor any alterations other than converting it from Microsoft Word to portable document format ("pdf") and redacting information as detailed below.

"In making redaction decisions, counsel to the Executive Committee included, in their entirety, entries that reference an admission, confession, guilty plea, conviction, judgment, sentencing, or inclusion on a sex offender registry. The only exception to those entries is the redaction of names or identifying information of survivors and/or other individuals unrelated to the offender. Many of the entries list either an arrest or charges, but no disposition. Since May 24, 2022, counsel to the Executive Committee has done preliminary research and, where guilty pleas, convictions, judgments, sentences, and/or inclusion on a sex offender registry could be easily verified, the entry was left unredacted. Other entries where preliminary research did not indicate a disposition that fits within the described parameters have been redacted. Entries that do not relate to sexual abuse or that resulted in an acquittal are also redacted," they wrote.

Members of the convention's executive committee, which met Tuesday, apologized to abuse survivors and announced they would release the records, which were uncovered during an investigation by Guidepost Solutions into the denomination's handling of past sex-abuse cases.

The 13.7 million-member denomination, which commissioned the report, has also created a hotline so that survivors or their representatives can "report an instance of abuse in a Southern Baptist church or entity."

Information can be submitted by calling (202) 864-5578 or by emailing SBChotline@guidepostsolutions.com, the convention announced on its website, sbc.net.

Investigators promised to respond to messages within 24 hours.

"Survivors will be notified of the available options for care and will be put in touch with an advocate. All information will remain confidential," the announcement stated.

The newly disclosed documents, redacted to shield the names of victims, were posted late Thursday. In many instances, the records were simply copies of news articles that had already been published by newspapers or other news sources.

The Southern Baptist Convention, formed due to regional divisions over slavery, is the largest and one of the wealthiest Protestant denominations in the country, with average Sunday in-person attendance of about 3.6 million in 2021.

Its 47,614 churches, located in all 50 states, reported receipts last year of more than $11.5 billion, with more than $1 billion going for missions work in the U.S. and around the world, according to the latest Annual Church Profile Statistical Survey.

Southern Baptist leaders had resisted efforts, for 15 years or longer, to create a database listing preachers and others credibly accused of preying on children and others in the pews, arguing that the denomination lacked the authority to ordain ministers or to defrock them and did not dictate to local autonomous congregations.

Victims advocates had urged the denomination to release the list.

A task force set up to examine the church's handling of sex abuse allegations is recommending several changes.

They want the denomination to:

• "Create and maintain a process that will work within our Baptist polity for alerting the community to the presence and activity of credibly accused offenders, including the establishment of a 'ministry check' website."

• Hire a subject matter expert or experts "to receive calls, provide initial guidance for reports of sexual abuse, and work with state conventions for training and educational opportunities."

• Provide "training regarding sexual abuse prevention and survivor care" for all entity boards and standing committees while also implementing "background checks as part of their orientation and selection."

• Ensure that seminary students and International Mission Board and North American Mission Board workers receive "formal preparation ... in regard to prevention, training, and survivor care."

Their recommendations are expected to be taken up when the convention holds its annual meeting next month in Anaheim, Calif.

Christa Brown, who said she was sexually abused by a Southern Baptist minister when she was a minor, had worked for nearly two decades to focus attention on the sex abuse crisis within the denomination.

Late Thursday, she discovered that the denomination had acknowledged her own suffering -- her former pastor's name was among those listed.

"I'm 68 years old, and I never thought I'd live to see this day where ... what was done to me would in any way be acknowledged," said Brown, who is from Colorado. "Not only have I not had any support or care from this faith group, but I've had active vilification and meanness and cruelty."

Now, the tone has changed, she said.

"There were people in the pews, there were messengers at the convention, who finally saw this horrific reality and could not live with it and decided to work shoulder to shoulder with us survivors," she said. "And I'm grateful for that."