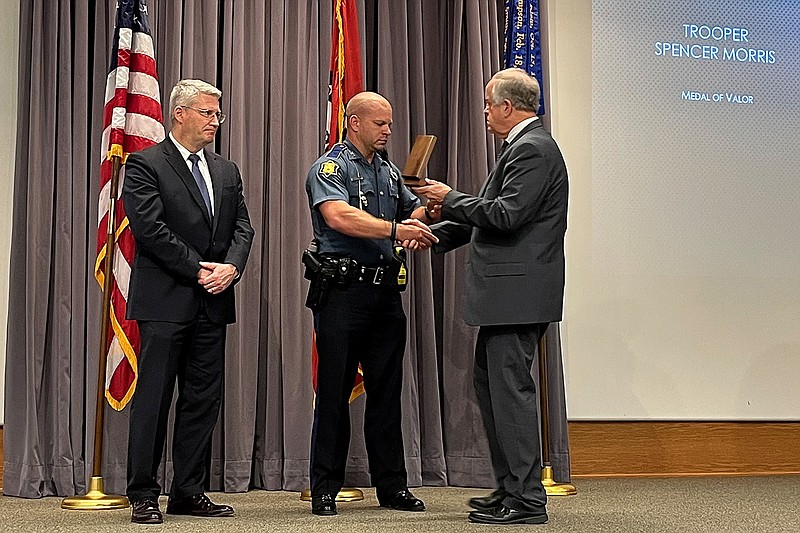 Arkansas State Police Trooper Spencer Morris receives the agency’s Medal of Valor from state police director Col. Bill Bryant (right) on Wednesday, as James Dawson, FBI special agent in charge of the Little Rock field office, looks on. Morris was also named Trooper of the Year by the state police agency for his actions during a pursuit in December in which he was shot by a suspect. (Arkansas Democrat-Gazette/Grant Lancaster)

Arkansas State Police troopers and employees were honored for service deemed exemplary at an annual awards ceremony Wednesday, with one trooper earning the agency's 2021 Trooper of the Year award on top of national honors he received earlier this year for his actions in a December pursuit.

State police director Col. Bill Bryant presented awards to about 25 employees of his agency, as well as three Little Rock police officers and a state parks officer, at a ceremony at Camp Robinson organized by the Arkansas State Police Foundation.

The awards ranged from official commendations to awards for saving the lives of fellow officers or citizens to the Medal of Valor, the agency's highest award. The non-state police officers were honored for actions in conjunction with state police personnel.

Trooper Spencer Morris, 33, was named Trooper of the Year after receiving a Medal of Valor for his actions during a pursuit that ended over the state line on Memphis on Dec. 16.

Any troopers who earn Medals of Valor or lifesaving awards are considered for the annual honor, and Morris was one of 17 candidates this year.

Morris was pursuing a fugitive when a person in the suspect vehicle opened fire, hitting Morris, who returned fire from his patrol vehicle, stopping the fugitive's vehicle and keeping watch until backup arrived.

A body armor vest protected Morris from serious injury and he was released from an area hospital later that day. His return fire killed the two men in the suspect vehicle.

Morris described the gunfight and his actions after being hit as what any trooper would do under the circumstances. He said he had been on the receiving end of gunfire before, but this was the first time he had returned fire in the line of duty.

Prior to being honored by his own agency, two national law enforcement groups -- the International Association of Chiefs of Police, State and Provincial Division and the American Association of State Troopers -- also named Morris National Trooper of the Year.

"It's a humbling experience," Morris said of the awards.

Alisa Blackerby, 50, the agency's civilian driver's license coordinator, was named 2021 Employee of the Year for her work streamlining the state's driver testing procedures by creating a system for citizens to pre-schedule written or practical tests.

Blackerby, who has worked 20 years with the agency, also created an online video for parents outlining the steps necessary for teenagers to prepare for the driving tests.

Alongside the state troopers, Little Rock Police officers Joshua Myers, Terrance Ellington and Bailee Toro were presented with Distinguished Service Awards for their efforts saving the life of state police Sgt. Nicholas Brown, who was seriously injured Jan. 16, 2021, when he was pursuing a suspect and impaled in the groin by a spike on a wrought-iron cemetery fence.

The three are credited with helping treat Brown and getting him to an ambulance where paramedics could continue treatment.

Troopers Brandon Love, Dakota Davis, Jeb Little and Korbyn Freeman earned lifesaving awards for their actions during the incident, and Brown was presented with the Golden Shield award, given to troopers who suffer serious injuries in the line of duty.