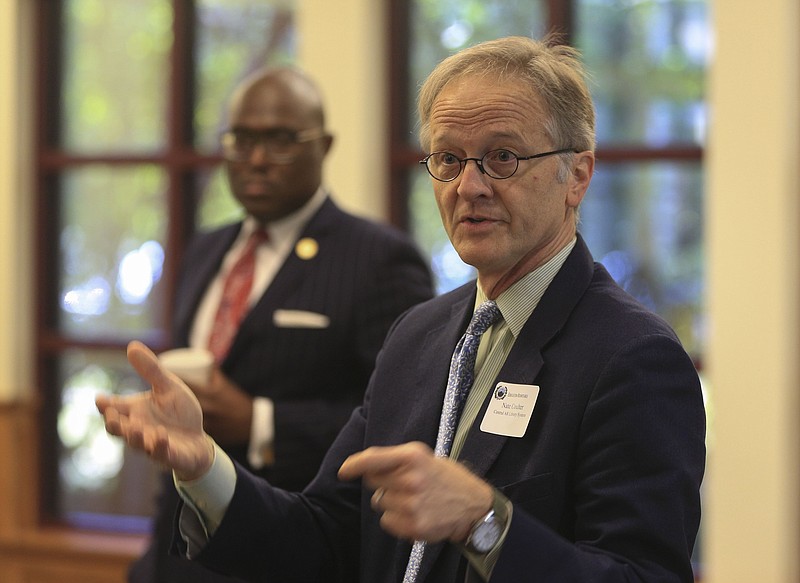 The executive director of the Central Arkansas Library System at a board meeting on Thursday called the success of the library system's property-tax referendum in Little Rock two days earlier "a gratifying illustration of how much the community supports the library."

At the same time, Nate Coulter acknowledged that he had been a little worried.

Library officials had asked residents to approve a reduction in the Little Rock capital-improvement millage rate that supports the library system from 1.8 to 1.3 mills as well as the refinancing of bonds.

Once voting started, people contacted Coulter and expressed some confusion, he said Thursday. They said they loved the library and did not ever want to lower its taxes, but were being told it was a good thing, Coulter recalled.

Likewise, when reading the ballot itself, he remarked, "You could get lost in that."

Nevertheless, Coulter said he "underestimated the intelligence, collectively, of the voters and their commitment to the library because if you go back, since 1992, they have consistently renewed the authority for capital-improvement bond issues, which is not something to be taken for granted."

According to unofficial results from the Pulaski County Election Commission, the latest referendum passed with 20,781 ballots in favor of the proposal out of 30,622 cast.

Refinancing outstanding bonds is expected to generate more than $22 million, which library officials want to use on interior renovations to the Main Library, the acquisition of a bookmobile and more.

Tuesday's ballot language said the extended and reduced millage would be pledged to one or more bond issues with a maximum aggregate principal amount of $42 million.

Coulter has estimated that the decision to refinance at the lower millage rate will extend payments on the library system's reissued bonds by two years, with the payoff expected to occur in eight years instead of six.

Earlier this week, Coulter told the Arkansas Democrat-Gazette via email that time frames for the planned improvements might vary. Remodeling of the Main Library might not begin until mid-2023, he said.

The decision to lower and extend the millage was tied to another recent special election and a commensurate change, albeit in the opposite direction, for a separate property-tax levy.

Last November, approximately 71% of participating Little Rock voters approved increasing the millage rate that funds operations and maintenance at the library system from 3.3 to 3.8 mills.

Library officials sought the operational-millage increase -- the first such increase approved in Little Rock since 2007 -- because of costs associated with new facilities and electronic materials as well as a shift away from relying on capital-improvement bond revenue to cover the materials budget.

On Thursday, Coulter told board members that "we think we were being faithful to the commitment we made last year. We said, 'If you give us a little more money to operate, we'll give it back to you the first chance we get.'"

He added that he felt good about "having satisfied that commitment and having essentially put the taxpayers back in the position they were in before they gave us the much-needed boost to our operating revenue."

Each mill equals the dollar amount of tax paid on every $1,000 of the tax-assessed value of a piece of property.

Earlier during the library system's board meeting, board treasurer Brandon Grice said three entities were considered to serve as bond underwriter: Crews and Associates, Stephens Inc. and Carty and Company.

Library system board members then approved a motion to rely on Crews as underwriter.