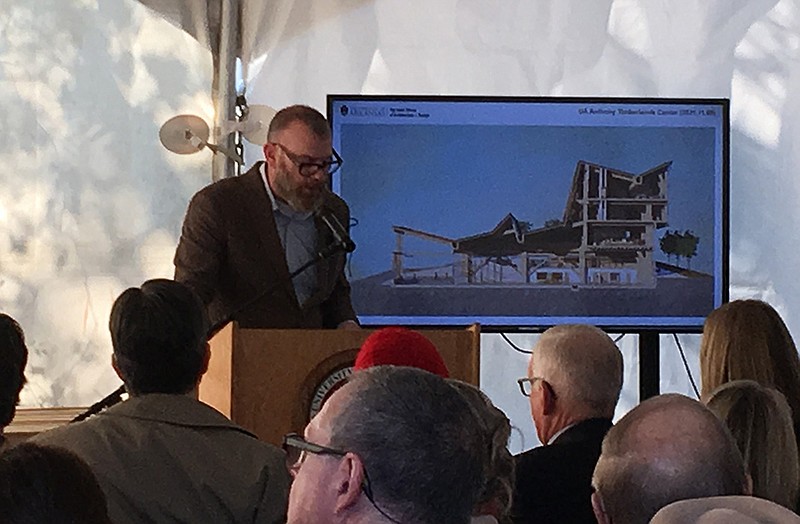 Jason Wright of Modus Studio describes architectural renderings of the Anthony Timberlands Center for Design and Materials Innovation during a Nov. 5 presentation for University of Arkansas trustees. The cost of the “aspirational” project was initially estimated at $26.5 million but has grown to $33.5 million. (Arkansas Democrat-Gazette/Jaime Adame)

Trustees on Thursday approved an increased project budget of $137.6 million for an under-construction research facility already described as the most costly academic building ever at the University of Arkansas, Fayetteville.

The 10-member University of Arkansas board of trustees also approved a revised price tag of $33.5 million -- double that of a March 2020 estimate -- for a separate "aspirational" project showcasing wood design that a UA official said Thursday had previously been priced as if it were a more simple building.

Rising construction expenses, along with design considerations, led to increased cost estimates for both the Institute for Integrative and Innovative Research and also the Anthony Timberlands Center for Design and Materials Innovation, said Scott Turley, UA's associate vice chancellor for facilities, during Thursday's board meeting held in Batesville.

Both projects have millions in support from donors -- and fundraising continues -- but the extra costs may also require more university dollars to go toward the construction efforts, according to board documents.

The Institute for Integrative and Innovative Research, often referred to by the university as I3R, is envisioned as a hub for some 30 faculty researchers working in collaboration across academic disciplines, according to past project descriptions.

Costs are rising about 21% from a previous estimate of $114 million presented to trustees in November 2020.

Turley said that the earlier estimate called for a third level with "shelled out" -- meaning unfinished -- laboratories, before UA began pursuing an "opportunity to potentially get some private funding to complete that space."

"As we close on a guaranteed maximum price and the final price for this project, we're just concerned that we're going to need some more capacity and are asking for that consideration," Turley told trustees, who approved the higher project cost without discussion.

The board resolution states that trustees approve "the use of University reserves and other potential gifts and grants as sources for the additional funding."

The university established the Institute for Integrative and Innovate Research with a $194.7 million grant from the Walton Family Charitable Support Foundation announced in July 2020.

The foundation was established by the family of Sam Walton, founder of Bentonville-based Walmart.

Out of the Walton gift total, $50 million was for building the main research facility, according to grant documents released under the state's public disclosure law.

Previous building project documents presented to the board in November 2020 stated that there would be a "grant match" consisting of $30 million from a university bond issue and $20 million from university funds.

The other Walton grant money is going toward the purchase of institute equipment and to provide support for faculty, as well as other initiatives, including the establishment of a Bentonville satellite site for UA, which opened last year.

Mark Rushing, a UA spokesman, in an email Thursday described $64 million in Walton grant money going toward the project cost, as well as ongoing fundraising efforts.

For the Anthony Timberlands Center, cost estimates have been raised by about 26% from a previous estimate of $26.5 million given during a ceremonial groundbreaking event held last November.

The project is not on the main UA campus, but it is considered a part of the university's new Windgate Art and Design District, basically a city block that also includes a new visual arts building that's under construction.

The Anthony Timberlands Center is being designed by Grafton Architects, a Dublin-based firm whose co-founders won the 2020 Pritzker Prize, often described as architecture's highest honor.

A distinctive roof designed for the center "climbs over" the block onto Martin Luther King Jr. Boulevard, said Shelley McNamara, one of the building's designers, in a video message played at the November event.

The building is expected to use more than 62,000 cubic feet of Arkansas timber, according to information provided by the university in November. Main structural elements are to be large, prefabricated wood panels known as cross-laminated timber, as well as beams and columns made with Southern yellow pine.

Fabrication workshops for wood and metal, as well as an auditorium, gallery and others studios are to be housed in the building, described by UA as a future home for timber and wood design programs in the Fay Jones School of Architecture and Design.

"The Anthony Timberlands Center really is a first-of-its-kind facility in the country," Turley told trustees.

Turley referred to an earlier project estimate of $19.5 million, but the project has gone through multiple cost estimates.

In March 2020, documents prepared for trustees described the estimated cost as $16 million, which was increased in September 2020 to $19.5 million.

Turley said the $19.5 million estimate "was based on some 2018 construction costs, and also what I would say were some simpler type of construction," referring specifically to UA's Adohi Hall, considered the first U.S. college campus residential project built using large, prefabricated wood panels known as cross-laminated timber.

The Anthony Timberlands Center project started out with support from donors, and is named in honor of John Ed and Isabel Anthony after their gift of $7.5 million announced in 2018. Other donors have also been announced.

Documents presented to trustees this week stated that $10.5 million for the project will come from a university bond issue and university reserve funds.

At the current project estimate of $33.5 million, the board resolution approved by trustees states that "a minimum of $23.0 million of the funding to be provided through fundraising by the University and the Fay Jones School of Architecture and Design."

Mark Rushing, a UA spokesman, in an email said that "while up to $7.5 million in bonds and $3 million in university reserves have been committed if needed, our goal is to continue to decrease that need with private gift support now in-process or pending."

Board documents list $14.8 million in private gifts already raised, plus another $5.9 million of gifts and grants considered to be "in process" and an identified $5.3 million listed as "pending additional gifts and grant opportunities."

Turley said that Peter MacKeith, UA's architecture dean, "has really raised all the additional funds for this project."

UA System President Donald Bobbitt has in the past praised efforts to make use of the state's forests as a way to boost the economy. Bobbitt did not speak about the project Thursday, but in a letter to trustees he recommended approval for the increased cost.

"I ask for your positive consideration of this capital project budget increase for this innovative facility that has economic ties to the State's forest products industry, and that has engaged multiple stakeholders from across the State, in a project for the greater good of the State," Bobbitt said in the letter.

Rushing said construction will begin this fall on the Anthony Timberlands Center, with the the building expected to be finished in summer of 2024.