Hint of slowing inflation gives lift by Compiled by Democrat-Gazette Staff From Wire Reports | May 28, 2022 at 4:43 a.m. 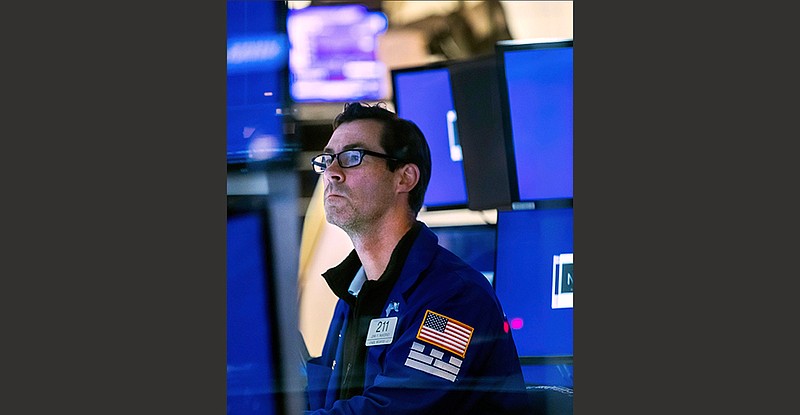 NEW YORK -- Technology companies led a broad rally for stocks Friday as Wall Street notched its best week in 18 months. The gain broke a seven-week losing streak for the market, the longest such stretch since 2001.

The strong finish for the week came as investors received potentially encouraging news about inflation. The Commerce Department said that inflation rose 6.3% in April from a year earlier, the first slowdown since November 2020 and a sign that high prices may finally be moderating, at least for now.

The report was released as Wall Street looks for any signal that inflation could be easing, while trying to figure out just how low stocks might sink.

"At this point that's all the market needs," said Ross Mayfield, investment strategy analyst at Baird. "It's definitely one of the signs you would want to see."

There may be hints inflation is slowing, but it's too early to celebrate, said Comerica Bank chief economist Bill Adams, who noted that gas and food prices continued to rise in May. There is also the threat of continued oil-market disruption from the war in Ukraine, or more supply chain shocks related to China's efforts to fight covid.

"Rising prices will probably continue to be a big problem for the U.S. economy for at least the rest of the year," Adams said.

FWDBonds chief economist Chris Rupkey said consumers appear to be dipping into their savings to weather the effects of inflation, but it remains to be seen how long they can do so.

"The economy can always turn on a dime, but at this point in the economic cycle, consumers are still spending their hearts out, keeping the recessionary winds at bay," Rupkey said in an email.

Volatility gripped markets this year on fears that hawkish central banks will tip the economy into a recession, with analysts remaining split on whether equities have found a bottom. Morgan Stanley and Bank of America recently said there may be more losses to come. Citigroup strategists recommended stepping back into stocks, particularly in Europe and emerging markets, on their appealing valuations.

"It is fair at this point to start doing some bargain-hunting," Lori Calvasina, head of U.S. equity strategy at RBC Capital Markets, told Bloomberg Television. "If you can get people more comfortable in the fundamental narrative going forward, I think that stocks are cheap enough to buy. Are valuations a reason to buy on their own? No, not yet."

The broader market has been in a slump for nearly two months as concerns about inflation and rising interest rates pile up. Investors were spooked last week by disappointing reports from key retailers, including Walmart and Target, which stoked fears about rising inflation hitting profit margins and crimping consumer spending.

Trading remained choppy throughout the week, though the market mostly pushed higher, as retailers including Macy's and Dollar General released encouraging earnings reports and financial updates.

Retailers were among the biggest gainers Friday as investors continued reviewing the latest round of earnings to get a better sense of just how much pain rising inflation is inflicting on businesses and consumers. Shares of beauty products company Ulta Beauty surged 12.5% for the biggest gain in the S&P 500 after raising its profit forecast for the year. Amazon rose 3.7%.

Inflation is at a four-decade high and has been persistently squeezing businesses. Higher costs prompted companies to raise prices on everything from food to clothing to protect their margins and consumers remained resilient. Russia's invasion of Ukraine worsened the inflation picture by pushing global energy and food prices even higher.

Supply chain problems at the heart of rising inflation were worsened in the wake of China's lockdown for several major cities.

The extra inflation squeeze has made it even more difficult for businesses to offset costs and is seemingly prompting a shift in consumer spending away from expensive items and toward necessities. It has also raised concerns that the Federal Reserve may have an even more difficult time trying to temper the impact from inflation.

The Fed is aggressively raising interest rates to fight inflation, but investors are worried that it could potentially push the economy into a recession if it moves too aggressively.

Information for this article was contributed by Damian J. Troise and Alex Veiga of The Associated Press, Abigail Moses of Bloomberg News (WPNS) and Aaron Gregg and Hamza Shaban of The Washington Post.