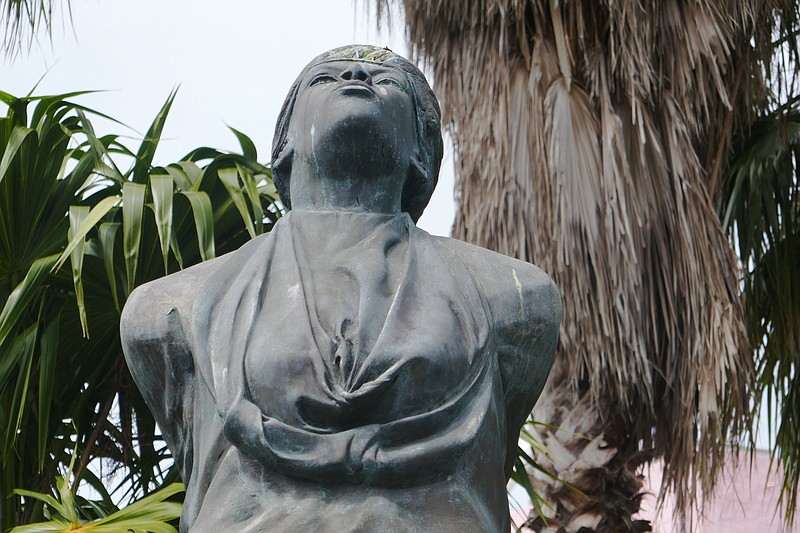 A statue of Sally Bassett at the stake, her arms bound behind her back, stands off Front Street near downtown Hamilton, Bermuda. (The Washington Post/Richard Morin)

It was a blistering hot day in June 1730 when the enslaved woman Sally Bassett was burned at the stake at the foot of Crow Lane in Hamilton, Bermuda. Her alleged crime: conspiring to poison her granddaughter's enslavers. On the way to her execution, Bassett reportedly called to the gathering crowd, "No use you hurrying folks, there'll be no fun 'til I get there."

Bassett then became a folk hero, embraced by free Black people and enslaved people throughout the Caribbean as a symbol of willful defiance to white oppression. A 10-foot bronze statue unveiled in 2008 in downtown Hamilton commemorates her life, Bermuda's first official memorial to someone who was enslaved.

Today, the statue is one of more than 50 "Sites of Memory" on Bermuda's African Diaspora Heritage Trail. Created in 2001 as part of the UNESCO Slave Route Project, the trail is part of an international effort to document the bitter history of slavery by telling the stories of enslaved people across the globe.

For six days, my wife, Roxanne, and I, along with her sister and brother-in-law, followed the trail along the approximately 24-mile length of this fishhook-shaped island. We planned our itinerary from lists of the most notable sites, as identified and described by the Bermuda Tourism Authority and the African Diaspora Heritage Trail Bermuda Foundation. The 14 stops included museums, statues, parks, churches, graveyards, nature preserves and private houses.

Set inside Bermuda's largest fort, the National Museum of Bermuda on the island's western tip is as good a place as any to begin the journey.

The story begins in the 17th century, when Bermuda became the first British colony to transport Black people to the island to work as indentured servants. Less than a century later, repressive laws had forced the island's Black residents into slavery.

Museum exhibits describe the transport through the dreaded Middle Passage from Africa across the Atlantic. Others highlight family life of those who were enslaved, the role of religion and the notable personalities of the 200-year-long slavery era. Another tells the story of the abolition movement in Bermuda. 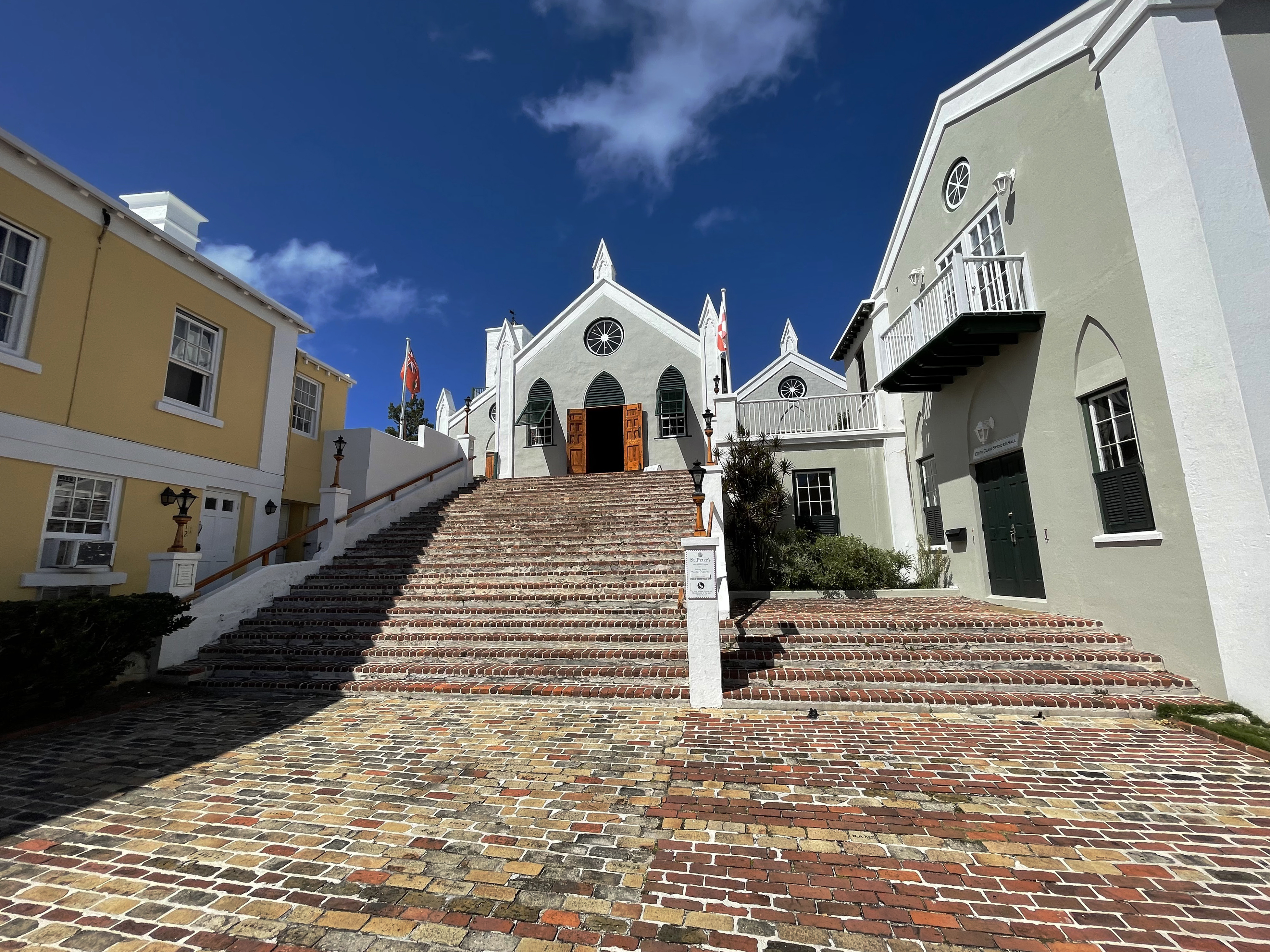 I lingered by the information panel "Rebels & Runaways," which recounted Black efforts to escape enslavement and the punishment for those who tried: a whipping from a "jumper," an appointed government official charged with administering lashes that were "painful enough to make slaves jump."

Another room tells the story of the foul trade itself. Diagrams of the layout of slave ships hang from the walls. They depict men, women and children squeezed shoulder to shoulder on the ship's deck and in its dank hold. The anguished words of one trafficked man, Olaudah Equiano, virtually cry out from an explanatory panel:

"I wished for the last friend, Death, to relieve me."

Front Street in downtown Hamilton, the capital of Bermuda, is the center of the island's tourism. Trendy bars, hotels, restaurants and tourist-centric shops line the street. It's the place to sip a dangerously potent Rum Swizzle, the unofficial national drink of Bermuda, or buy a pair of authentic Bermuda shorts at the English Sports Shop, established in 1918.

Some of the most important African Diaspora Heritage Trail memorials also are found here. The Bassett statue gazes defiantly toward the sky from the Cabinet Building grounds on the eastern end of Front Street.

A 10-minute walk west on Front takes you to Barr's Bay Park, overlooking Hamilton Harbor. The American schooner Enterprise, blown off course by a hurricane, landed here in 1835 with 78 enslaved people. Enslaved people were freed the previous year, and the people from the ship were given a choice: Return to the United States or remain free in Bermuda. Only a mother and her five children opted to leave. The bronze statue "We Arrive" by Bermudian artist Chesley Trott rises near the water at the southern side of the park.

A few blocks north, another statue by Trott commemorates the Theatre Boycott of 1959, a milestone in the Black struggle for equal rights in Bermuda. Although enslaved people were freed in 1834, racial segregation persisted through the middle of the 20th century. Trott's "When Voices Rise" statue commemorates the boycott that forced the integration of previously segregated movie theaters. Other segregated businesses followed suit. The statue depicting five stylized figures, arms raised high, is in Wesley Square near the Bermuda National Gallery. 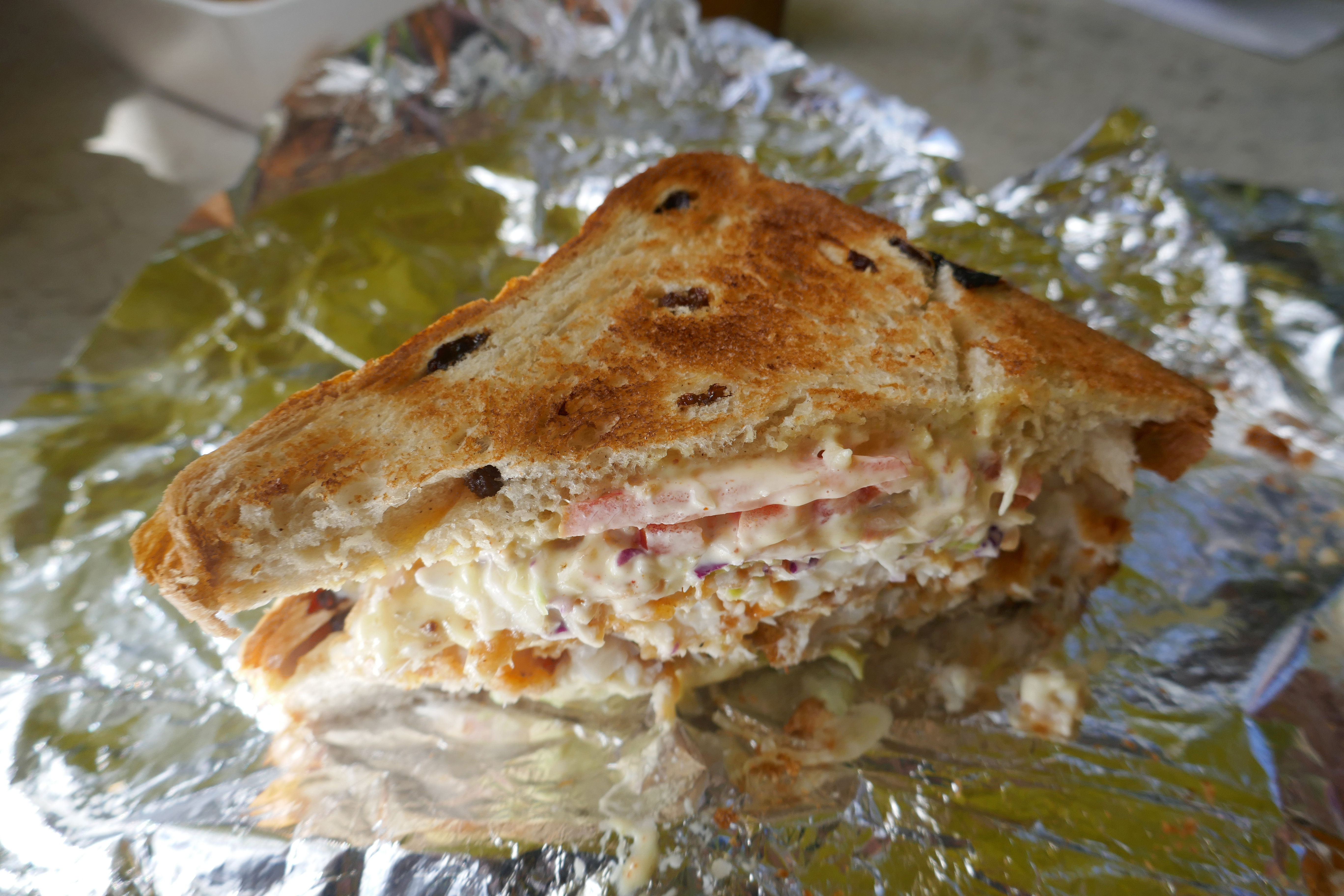 The traditional Bermudian fried fish sandwich on raisin bread like this one from Cafe Ole outside Hamilton is big enough for two. (The Washington Post/Richard Morin)
COBBS HILL CHURCH

The next day, we took a cab to the historic Cobbs Hill Methodist Church, passing streets of tropical-hued houses, all with scrupulously maintained white roofs that feed rainwater for drinking into below-ground cisterns. (Bermuda has no freshwater rivers or lakes.) The gray-and-white church lies at the end of Moonlight Lane and was built by enslaved people working at night after their day's labors were done. Today, many of their descendants worship at the church.

Our day ended at Spittal Pond, the island's largest nature reserve and a favorite of birders. Buffeted by a bracing ocean breeze, we followed an uneven trail to Jeffrey's Cave, overlooking the roiling, sapphire-blue Atlantic.

Jeffrey fled his enslaver in the early 1800s and hid for about a month in a cavern notched into a shoreline cliff. A 15-year-old enslaved girl brought packets of food to the edge of the cliff and tossed them down to Jeffrey. He was captured when his enslaver followed her.

Much of the early history of Bermuda happened in roughly eight square blocks in downtown St. George's at the far northeast tip of the island.

Below Old Maid's Lane on Water Street stands the whitewashed Tucker House Museum and Barber's Alley. The museum is a lovingly preserved 18th-century house where Joseph Rainey, a free Black man from South Carolina, opened a barber shop in the kitchen. Rainey had fled to St. George's with his family at the outbreak of the Civil War and returned when the war ended. Rainey later became the first Black member of the U.S. House of Representatives.

Two blocks to the east, weathered brick steps cascade down to York Street from the open front doors of St. Peter's Church. The church was established in 1612, the oldest Protestant church in continuous use in the New World.

A narrow brick path passes through a gap in the weathered limestone wall that surrounds the old Black cemetery on the western side of the church grounds. Free and enslaved Black, American Indian and Carib Indian people were buried here. The area to the east was reserved for white people.

Pilot Darrell's Square on Aunt Peggy's Lane lies a block west of St. Peter's. James Darrell, a legendary marine pilot, owned the tiny house with the sharply peaked roof at the head of the square. In 1795, Darrell guided the 74-gun HMS Resolution through the island's treacherous reefs to safe harbor. As his reward, he was granted his freedom a year later.

Darrell was the first Black person to own a home in Bermuda. One of his direct descendants lives in the house. 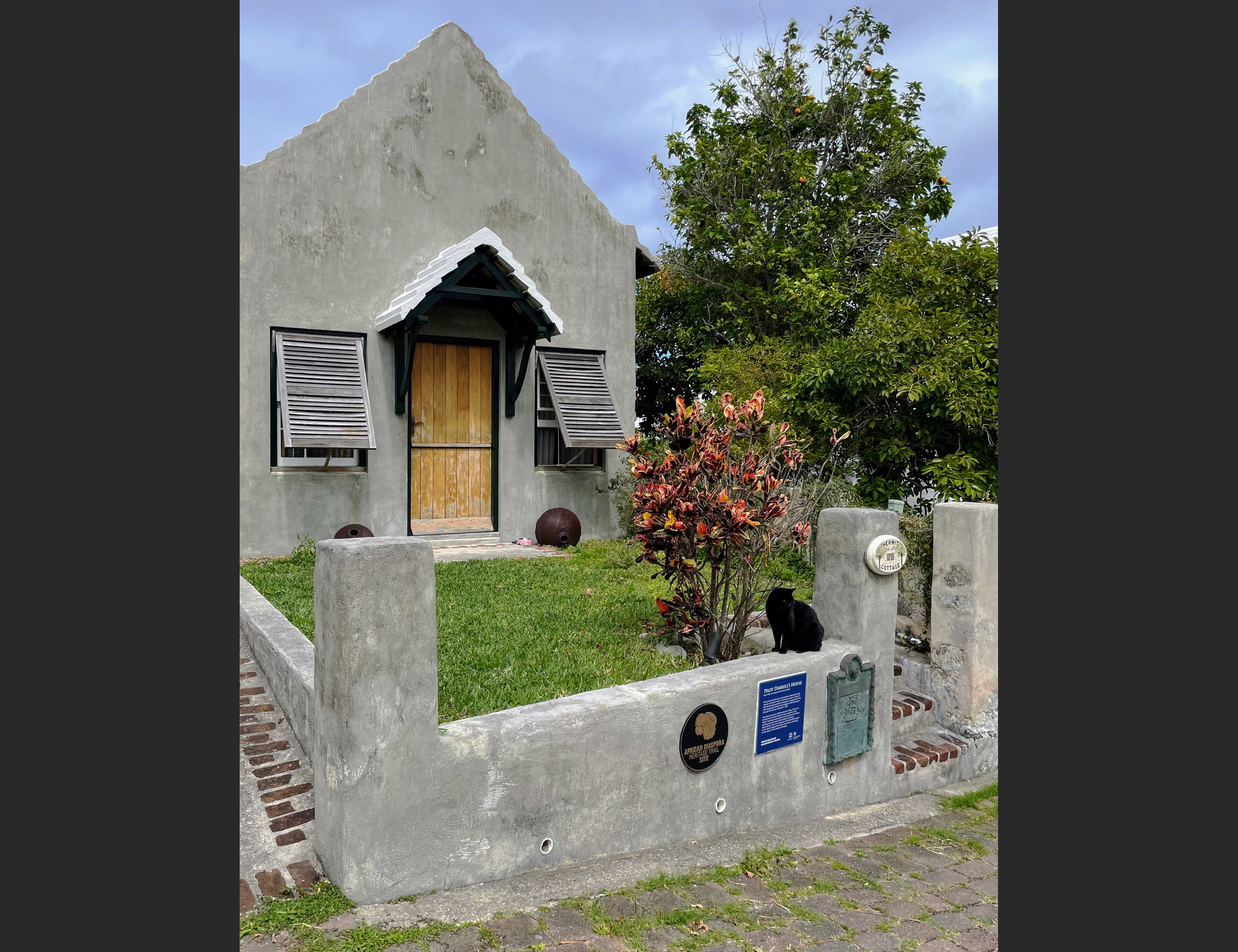 The home of James Darrell, the first Black man to own a house in Bermuda, stands at the head of Pilot Darrell’s Square in St. George’s, Bermuda. (The Washington Post/Richard Morin)
BERMUDIAN HERITAGE MUSEUM

When Joy Wilson-Tucker, the museum's president and exhibits director, was growing up, Black history was not taught in the schools, she said. For residents, particularly older Bermudians, the museum provided an introduction to their own history.

For tourists, the museum offers a window into Black Bermudian history. "When they walk into the museum and read what some of the slaves had to endure, it hits the heart," Wilson-Tucker said.

Some, she added, "leave in tears."

Not all notable Sites of Memory are open to the public (or at least were open to us). The Verdmont Museum, a restored 1710 house outside Hamilton, was closed the day we visited. But my real interest was in the adjacent kitchen house where enslaved people prepared meals; it is now a private residence. The renovated Mary Prince house also is in private hands. And the old State House in St. George's was locked tight when we walked by.

Our final trail stop lay on the edge of the Atlantic on St. David's Island. The imposing Lost at Sea Memorial in Great Head Park features a stylized boat perched upright on its stern, the bow pointed toward the sky. Inside, sculptor Bill Ming positioned a life preserver, hourglass, oar, navigational dividers and ship's log.

When we visited, the near-gale-force winds of previous days had moderated. Visible through a tangle of sea-grape trees, swells gently foamed over the inshore reefs. To the northeast, the cerulean Atlantic stretched to the horizon.

The poem "The End of Time" by Allan E. Doughty Sr. is inscribed on the logbook. If you substitute the word "slavery" for "the sea" in its final line, the verse could read as a celebratory ode to the story told by the African Diaspora Heritage Trail:

"Victorious, glorious, no more the sea."