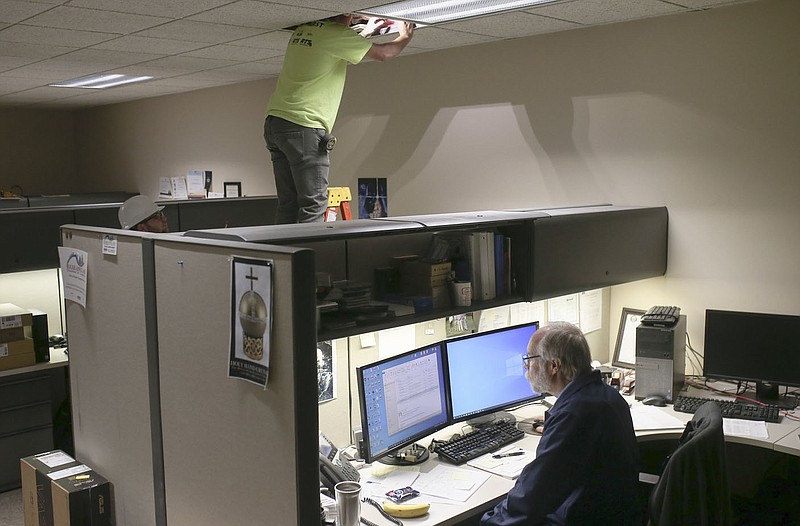 Envocore Site Supervisor Nick Herzan (left) seals air leaks with spray foam, Friday, May 6, 2022 at Rogers City Hall in Rogers. Crews are making changes to 23 buildings across the city to make the facilities more energy efficient. This week, they are working at City Hall. The city is on a path to use 100% renewable energy after the completion of its $5 million energy savings project and $12.2 million solar panel project. Check out nwaonline.com/220507Daily/ and nwadg.com/photos for a photo gallery. (NWA Democrat-Gazette/Charlie Kaijo)

ROGERS -- The city's $5 million energy savings project and $12.2 million solar panel project are underway as crews look to update the heating and air, lighting and weatherization in 23 city buildings.

"All portions of the project have begun in some manner, but it will be a while before any portion is totally complete," said David Hook, facilities development manager.

The work includes replacing fluorescent lights with LED, improving building envelopes and installing energy management control systems and heating, ventilation and air conditioning units. Building envelopes are the components of buildings that create a thermal barrier between the interior and exterior.

Work on the lighting and building envelope improvements has been done in multiple buildings and should be complete within a few months, Hook said.

The City Council hired Johnson Controls of Little Rock last year to do an energy audit of city facilities. The company recommended an energy savings project and solar panels.

The council approved the energy savings project at an Oct. 26 meeting and the solar panel project at a Nov. 4 meeting.

The solar array project will be the largest publicly owned solar facility in Arkansas, according to a news release from Johnson Controls.

Once complete, the projects will make Rogers one of the first cities in the state to use 100% renewable energy to power its municipal facilities.

The next phase of the projects to cross the finish line will be the heating, ventilation and air conditioning upgrades, according to Hook.

"The HVAC units have been ordered, but it will be around August before they start arriving on the various sites," he said. "Some of those units will likely not arrive and be installed until late this year due to supply issues."

"New wiring has been installed in all facilities for the controls system, but the controllers themselves will not be installed until the HVAC improvements are complete," he said.

Though the paperwork process has begun for the solar portion of the project, it won't be complete for another nine to 12 months due to the approval procedure through the state and utility companies, according to Hook.

The solar arrays, totaling 4.6 megawatts, will be installed at the city recycling center, Fire Station No. 8 and on a covered parking lot at the Police Department.

A megawatt is a unit measuring electrical power that is equal to one million watts. One megawatt of solar can power an average of about 110 homes annually in Arkansas, according to the Solar Energy Industries Association, a national nonprofit trade association for the industry.

Rogers' solar equipment has a guaranteed life of 30 years, according to the release from Johnson Controls.

The panels are predicted to generate more than 157 million kilowatt hours of electricity, a value of over $15 million in utility, operations and maintenance savings, according to the release.

The projects are being paid out of the city's reserves.

The city has paid $4.5 million to date of the almost $18 million contract for the projects, Finance Director Casey Wilhelm said.

Money set aside for the projects totaled $18.5 million, though the contract was less, she said.

The city used $1.3 million of a 2018 bond issue, which included building improvements to the heating, ventilation and air conditioning system at the Police Department, to cover new HVAC units, Wilhelm said. She said the city rounded up on its request to the council to cover any unforeseen costs.

Appropriations not used would go back to the city's general fund reserves, she said.

Johnson Controls has guaranteed both projects will pay for themselves in 20 years, agreeing to pay the difference if the improvements don't meet the numbers the company has set.

As a result of the project, the city's energy bills will be lowered by 1 watt of energy for every watt of electricity generated, Hook said in November.

Other cities have generated 15% to 40% more electricity than expected and realized even more savings, Hook said at the time.

"We're very happy to be part of the beginning of this movement in Arkansas," he said.

Almost 90% of renewable energy transactions by local governments in the United States have been solar energy deals, though wind projects have shown a far greater capacity, according to the American Cities Climate Challenge, an initiative launched by Bloomberg Philanthropies to track lowered carbon emissions. Wind projects average a capacity of 72 megawatts per project, over three times the average solar project capacity.

Access to steady wind is rare in most cities, with exceptions in the Southwest and Midwest regions, according to the initiative.

Rogers is not alone in efforts to transition Northwest Arkansas and the surrounding region to renewable energy for public properties. It also isn't alone in using solar energy.

Clarksville was the first Arkansas city to run its government operations with 100% clean energy, according to Barry Sellers, business development director of Clarksville Connected Utilities.

The municipally-owned utility receives enough power from two solar farms, owned and operated by Scenic Hill Solar, to offset city operations. The solar arrays were built in 2017 and 2019, according to the utility's website.

The utility's power supply is largely generated through renewable hydroelectric and wind sources, though the utility also gets power from some traditional fossil fuel plants, Sellers said.

Clarksville has about 9,476 people, according to the U.S. Census Bureau.

Solar arrays at the two plants, each 5 megawatts, generate enough energy to support about two-thirds of the city's municipal operations, according to Peter Nierengarten, city environmental director.

Each plant also has its own battery storage system, according to Nierengarten.

Solar power purchase agreements like Fayetteville's allow cities to take advantage of a federal tax credit for solar energy systems on residential and commercial properties, lowering the cost of a solar array, he said.

The deal allowed the city to lock in the purchase price of generated electricity for 20 years, he said. As the retail electric rate has risen during the last few years, the city is saving even more than originally planned. Nierengarten said the city saved $400,000 last year due to the solar arrays -- about $250,000 more than expected.

The total savings through the 20-year agreement was expected to be $6 million.

Fayetteville adopted an energy action plan in 2019, setting a goal to transition municipal operations to 100% renewable energy by 2030. The city might reach that goal a little earlier than expected, according to Nierengarten.

Springdale converted its Recreation Center and some of its fire stations to solar power in June.

Expected to save an estimated $24,000 a year, officials signed an agreement with Ozarks Electric Cooperative to provide the city with power for 20 years from a solar park north of Lincoln. Today's Power built, operates and maintains the farm.

The city also approved in February the sale of $10.2 million in bonds to finance a solar project with Today's Power, Ozarks Electric and the Springdale School District.

The project involved installing a 2.4-megawatt solar array and 6.9 megawatts of battery storage on school-owned property near Sonora Middle School.

Today's Power expects the project to generate 4.8 million kilowatt hours per year, offsetting about 95% of the total energy consumed by the Tyson School of Innovation and Sonora Middle and Sonora Elementary schools, according to a company news release.

The project will save the district more than $2 million over the next 25 years, according to Derrick Redfearn, vice president of member relations for Ozarks Electric.

"The savings is recovered through a fixed power purchase agreement directly with TPI over that time frame," he said.

"The project is currently still in construction with just a few more steps that need to be completed," he said.

Bentonville, unlike Rogers, has its own electric utility and buys power from Southwestern Electric Power Co., according to Travis Matlock, the city's electric utilities director.

Matlock said the city's purchase agreement with the company will run through the end of 2032. The agreement prohibits the city from installing its own power-generating facilities.

"The city cannot own, operate or participate in a large-scale solar project," Matlock said. "It doesn't mean we cannot put solar on individual buildings."

Concerning renewable energy, Bentonville has an 18-megawatt allotment of hydroelectric power from the Grand River Dam Authority in Oklahoma, he said.

Cooper said the city entered into an agreement last fall with OG&E to purchase electricity generated from a solar farm in Branch. The city expects to save $47,000 a year from the deal, she said. 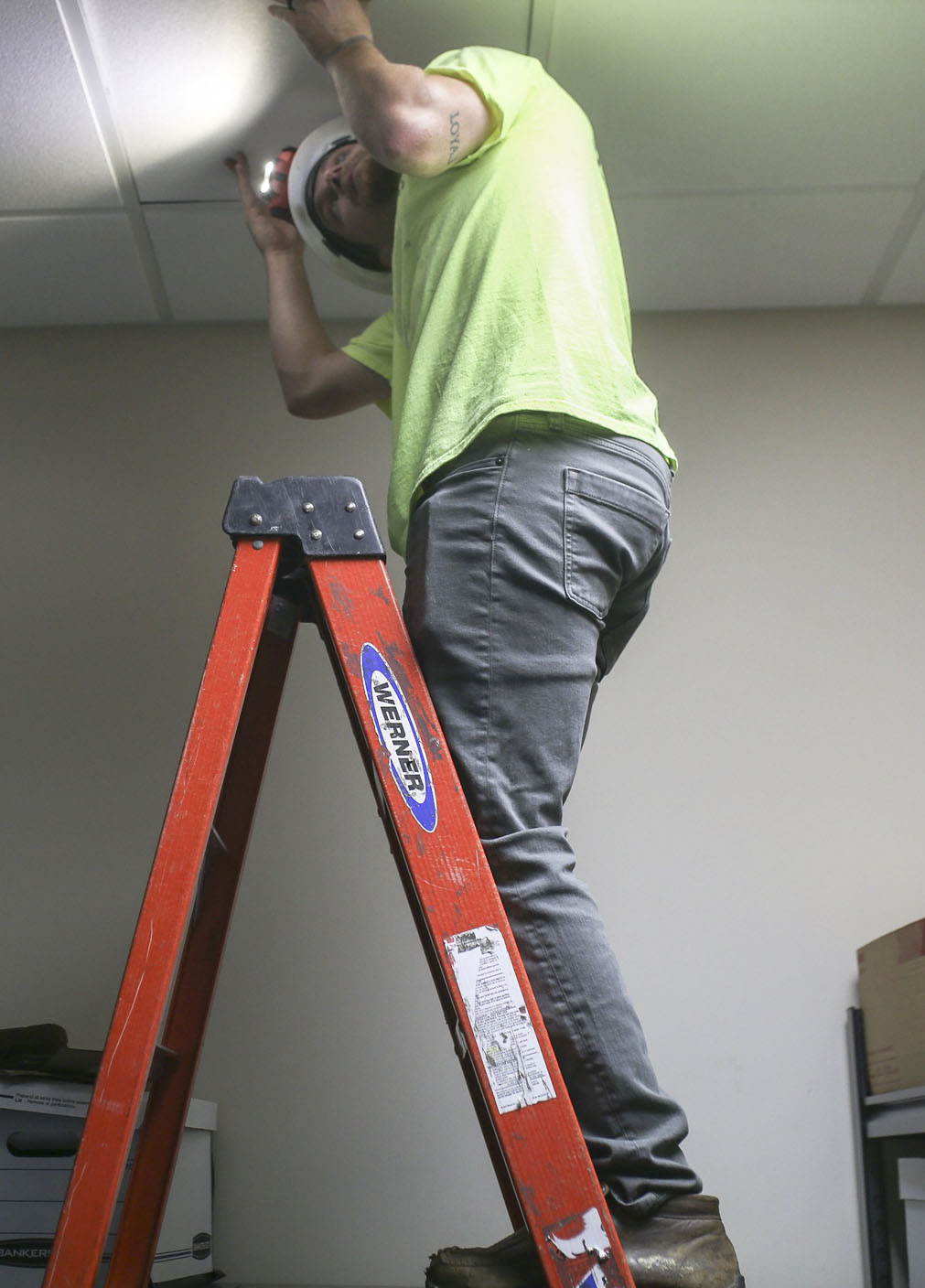 Envocore Site Supervisor Nick Herzan prepares to seal air leaks with insulation, Friday, May 6, 2022 at Rogers City Hall in Rogers. Crews are making changes to 23 buildings across the city to make the facilities more energy efficient. This week, they are working at City Hall. The city is on a path to use 100% renewable energy after the completion of its $5 million energy savings project and $12.2 million solar panel project. Check out nwaonline.com/220507Daily/ and nwadg.com/photos for a photo gallery. (NWA Democrat-Gazette/Charlie Kaijo) 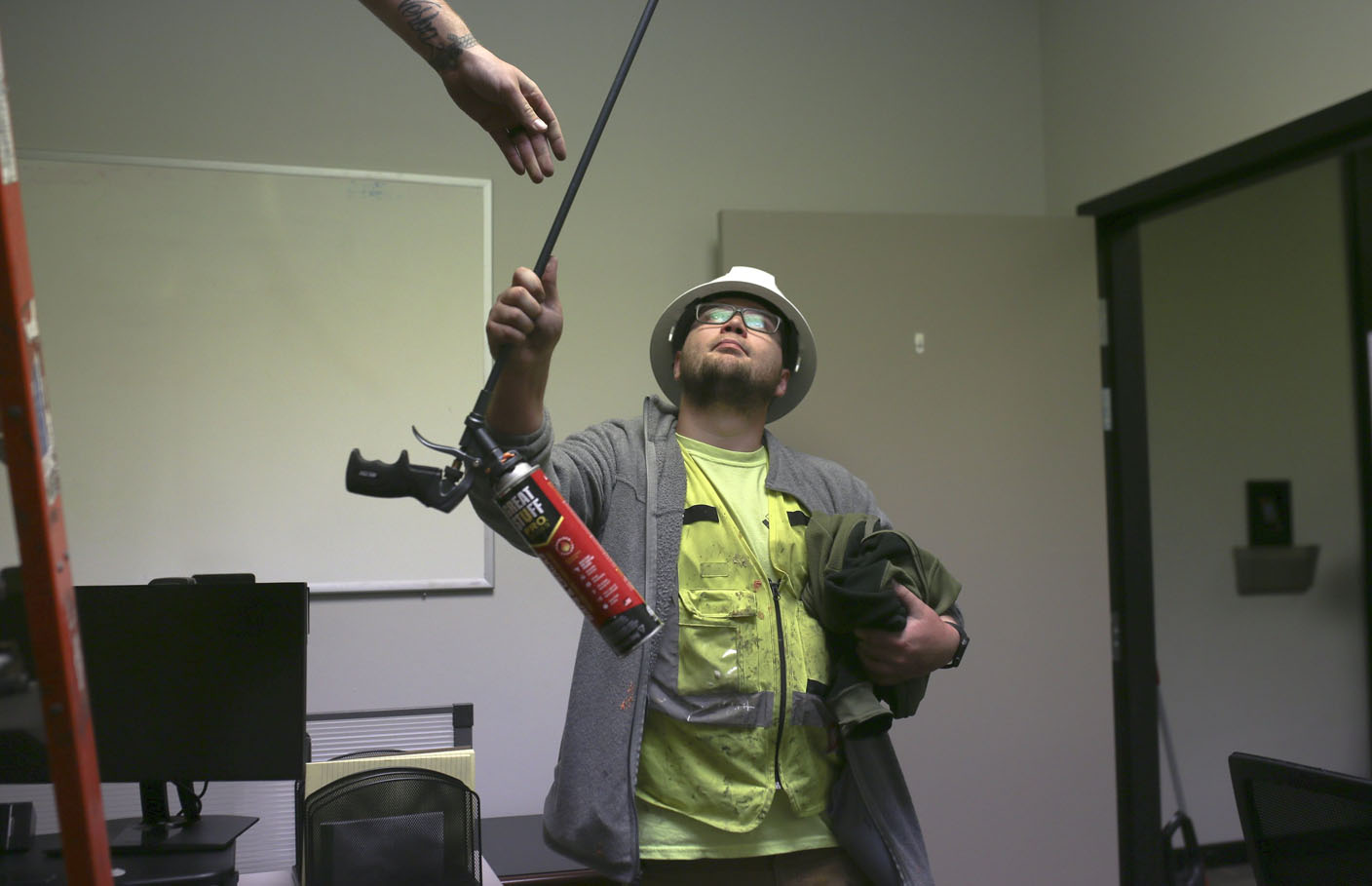 Envocore Technician Kaylon Bryant (center) hands spray foam to Site Supervisor Nick Herzan, Friday, May 6, 2022 at Rogers City Hall in Rogers. Crews are making changes to 23 buildings across the city to make the facilities more energy efficient. This week, they are working at City Hall. The city is on a path to use 100% renewable energy after the completion of its $5 million energy savings project and $12.2 million solar panel project. Check out nwaonline.com/220507Daily/ and nwadg.com/photos for a photo gallery. (NWA Democrat-Gazette/Charlie Kaijo)
More News