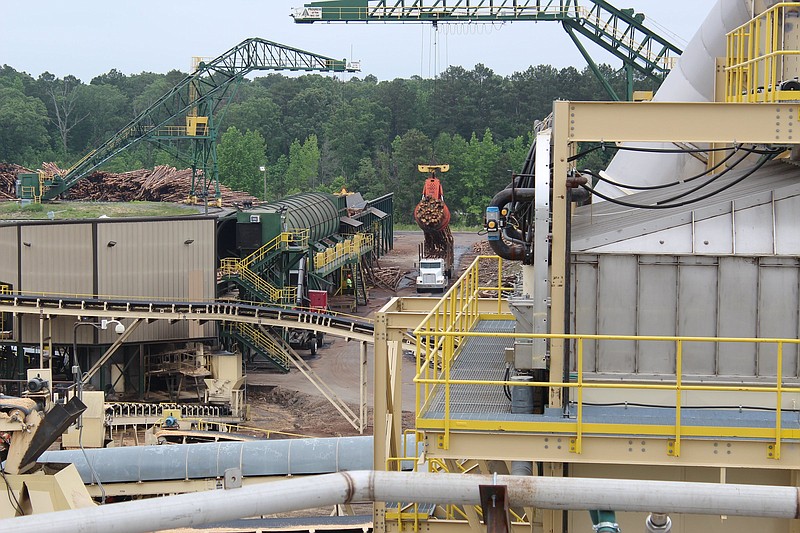 Logs are lifted from a truck at the Highland Pellets factory in Pine Bluff on Tuesday, May 24, 2022. (Arkansas Democrat-Gazette/Cristina LaRue)

PINE BLUFF -- The Russian invasion of Ukraine has had a global impact on business, and changes in the fuels used to generate electricity in Europe brought on by the war might open up opportunities for a wood pellet producer in Pine Bluff.

Russia was exporting 3 million tons of wood pellets each year into Europe before the war in Ukraine started, said Highland Pellets Chairman and Co-founder Tom Reilley. European countries like the United Kingdom were already moving toward more sustainable energy production models, amid growing awareness of the carbon footprint of energy production.

"The demand for biomass is going up," Reilley said Tuesday. "They stopped importing Russian coal into Germany and Poland, that's tens of millions of tons of coal that's never coming back, so now coal is getting more expensive and wood pellets right now, are about the same cost."

While the war has not significantly impacted Highland Pellets, there could be a future impact. Most biomass fuel produced in the U.S. is exported, and most is used to generate electricity.

The European Union's executive arm, the European Commission, announced plans recently to offer financial assistance and other support to member states to reduce reliance on Russian fossil fuels and unveiled a plan to phase out the EU's dependence on Russian energy, and transition to clean energy.

"They're on a hyper fast path to get off [of Russian energy] in the next three to four years," Reilley said. "It's going to accelerate their plans for hydrogen and for biomass. It means we're going to build more wood pellet plants. But there's a limit to how many wood pellets plants we can build because there's only so many sustainable forests that you can locate in."

Though the company has one major customer overseas, Highland Pellets has received additional interest from potential new customers since the onset of the war.

The company aims to expand its operations, though a timeline for those projects has not yet been announced.

Highland owns 350 acres between Stephens and Camden in southern Arkansas, and is considering using this land, as well as 54 acres near the port of Pine Bluff and an unannounced potential spot in "a neighboring state" to develop and expand operations.

"There's a growing list of customers, some of the biggest power and utility companies in Europe and in Japan," Reilley said, adding the company has a marketing representative overseas to assist with efforts to grow the company's customer base.

Burning wood pellets to create energy releases carbon, which is recaptured as trees are planted and start growing again. The pellets are more expensive than coal, but countries like the United Kingdom import biomass fuel from America because their governments have committed to transitioning to clean energy. Because of its long-term bilateral contract with its primary customer in England, Highland Pellets must abide by that country's rules in how it produces the pellets.

The Sustainable Biomass Partnership -- a regulatory body and certification system -- provides subsidies to clean energy power plants abroad and ensures both plants and the biomass fuel used meet strict standards. This means Highland Pellets must meet strict sustainability criteria to export product to its customer in the U.K., Reilley said.

"We go through a really strict auditing process," Reilley said.

"And if they do that, it's roughly a 92% drop in your carbon footprint [by energy usage]," Reilley said of power plants using wood pellets or pellets mixed with coal. "It's not a 100% drop because we still have to harvest the material, transport it, and you're using fossil fuels to do so."

The Pine Bluff plant sources trees from a 40-mile radius and purchases trees from 38 suppliers, Reilley said, but those suppliers support a large number of tree farmers.

"Those 38 suppliers might have a thousand people they're buying from," Highland Production Manager Daniel Kellebrew said.

There are about 100 workers on site at the Pine Bluff plant, but 235 off-site workers not directly employed by the company supply fiber to the mill via jobs like harvesting and transportation.

Reilley said he decided to co-found the company in Pine Bluff because "it had all of the fiber resources. Plus, we had power, gas and an underserved community from an employment standpoint."

Enviva is the largest biomass fuel producer in the United States, with manufacturing plants in five Southern states. Highland Pellets is the third largest producer in the South after Enviva and Georgia Biomass.

CORRECTION: An earlier version of this story included an incorrect spelling of Tom Reilley's name. 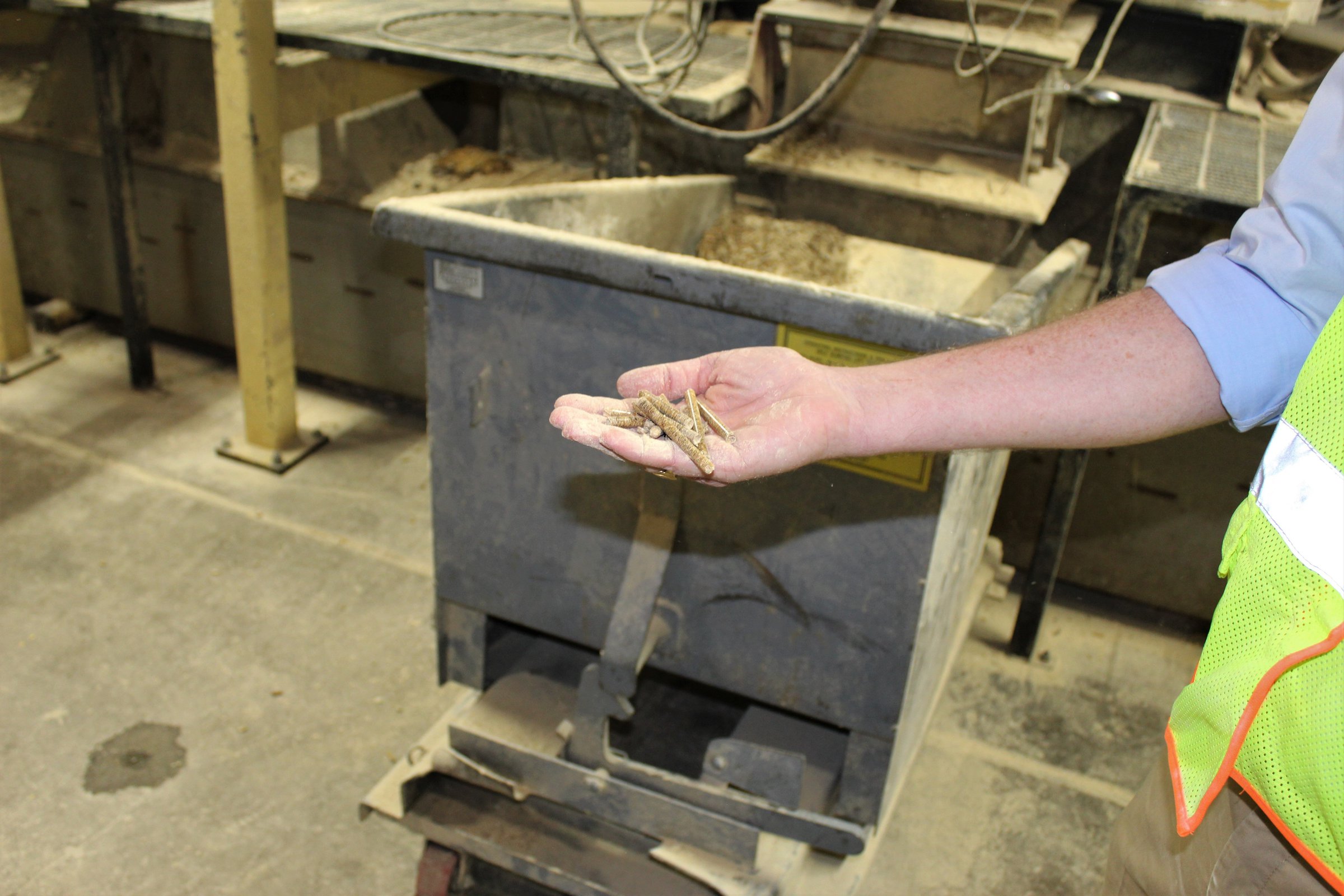 An employee holds samples of wood pellets created at the Highland Pellets factory in Pine Bluff on Tuesday, May 24, 2022. (Arkansas Democrat-Gazette/Cristina LaRue)