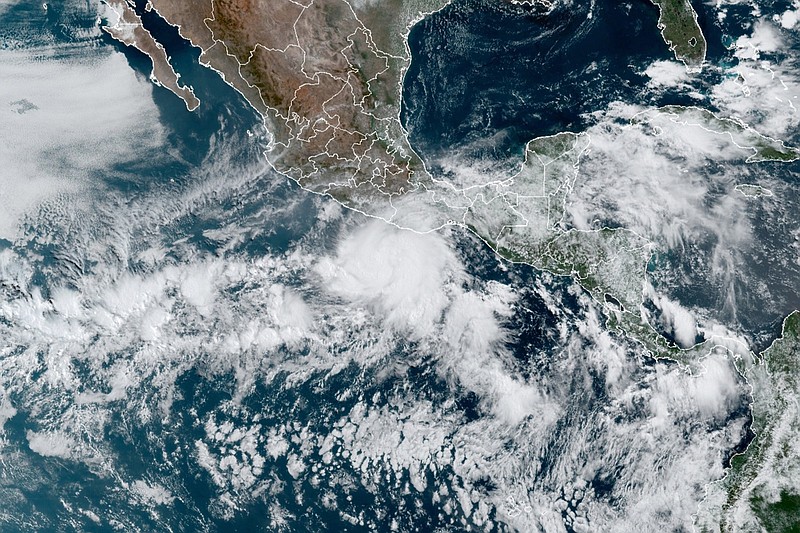 This satellite image made available by NOAA shows Hurricane Agatha, center, off the Pacific coast of Mexico on Sunday, May 29, 2022, at 11:20 a.m. EDT. (NOAA via AP)

MEXICO CITY -- The first hurricane of the season formed off Mexico's southern Pacific coast on Sunday and rapidly gained power ahead of an expected strike along a stretch of tourist beaches and fishing towns.

Hurricane Agatha could make landfall at close to major hurricane force today in the area near Puerto Escondido and Puerto Angel in the southern state of Oaxaca -- a region that includes the laid-back tourist resorts of Huatulco, Mazunte and Zipolite.

In early evening Sunday, the recently formed hurricane had maximum sustained winds of 110 mph, the U.S. National Hurricane Center said. It was centered about 160 miles southwest of Puerto Angel and heading to the northeast at 5 mph.A hurricane warning was in effect between the port of Salina Cruz and the Lagunas de Chacahua.

The civil defense office in Oaxaca said the hurricane's outer bands were already hitting the coast. The office published photos of fishermen hauling their boats up on beaches to protect them from the storm.

The government's Mexican Turtle Center -- a former slaughterhouse turned conservation center in Mazunte -- announced it was closed to visitors until further notice because of the hurricane.

The Hurricane Center warned of dangerous coastal flooding, as well as large and destructive waves near where Agatha makes landfall.

The storm was expected to bring 10 to 16 inches of rain to parts of Oaxaca state -- with isolated maximums of 20 inches -- posing the threat of flash flooding and mudslides.

Because the storm's current path would carry it over the narrow waist of Mexico's isthmus, the center said there was a chance the storm's remnants could reemerge over the Gulf of Mexico.

In northern Guatemala, a woman and her six children died Saturday when a landslide hit their home, but the accident did not appear to be related to Agatha.