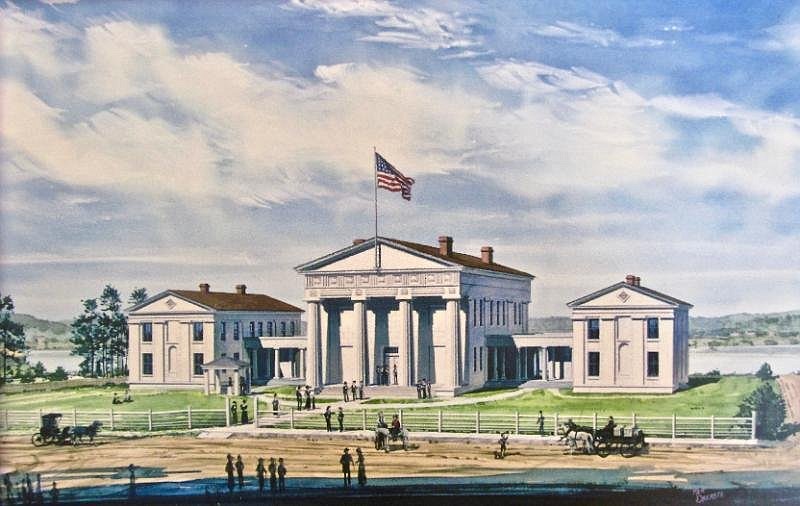 The Old State House building served as the State Capitol until 1911. (Special to the Democrat-Gazette/Jack Schnedler)

The new state of Arkansas' first governor, James Sevier Conway, ran a low-key election campaign in 1836. He felt uncomfortable making speeches or greeting voters. So all he did was write letters stating his platform to fellow politicians and newspapers.

That was enough in those pioneering days, as the Democrat defeated his Whig opponent: 5,338 to 3,222. Conway's portrait is the first of 46 faces on a video screen in the second-floor "Governors of Arkansas" galleries at the Old State House Museum in downtown Little Rock. Another image will need to be added after next Tuesday's elections and the new governor's inauguration in January.

After passing through the "First Ladies of Arkansas" room, decked out with inauguration-ball gowns (and perhaps a tuxedo for a "First Gent" after this election), visitors come to "On the Stump: Arkansas Political History."

This extensive and enlightening exhibit occupies the spacious chamber where the state's House of Representatives began meeting in 1885 after 49 years of sessions across the stairwell in a smaller room.

Text and illustrations displayed on a procession of kiosks convey the sometimes tumultuous saga of Arkansas elections and politics, starting with the territory's creation by Congress in 1819. The chronology runs until 1911, when the General Assembly moved west to the newly completed State Capitol.

Gallery: Sightseeing — "On the Stump" Exhibit

Headlines on the kiosks sum up the focus of various periods:

Those titles indicate that race was a central issue in Arkansas politics for much of the period covered by the exhibit. That fact is emphasized on the museum's website (oldstatehouse.com) by Carl Moneyhon, a retired history professor for the University of Arkansas at Little Rock.

Moneyhon wrote that "as statehood approached, regional disputes replaced personal ones. Yeoman farmers and stockmen from the highlands often found themselves at odds with the growing power of the Delta planters. This persisted until the very eve of the Civil War."

The four-year war "devastated Arkansas. Its only positive consequences were the ending of slavery and the granting of political rights to African-Americans. This transformation of the established order often led to violence during the Reconstruction and continued long after the ex-Confederates were returned to power."

“On the Stump: Arkansas Political History” is exhibited at the Old State House Museum. (Special to the Democrat-Gazette/Jack Schnedler)  While the Democratic Party formed a bulwark for racial segregation continuing into the Civil Rights era, Moneyhon noted that by the end of the 19th century, "Arkansas Democrats found themselves in the Progressive wing of the national party. Arkansans played a key role in the presidential campaign of William Jennings Bryan and later helped Woodrow Wilson to the White House."

The final kiosk of "On the Stump" points out that in 1910, the General Assembly "passed laws that created a new state board of education, provided support for the development of high schools, made school consolidation easier, and established four regional high schools that later became universities. The legislature also took steps to create a public health system. Arkansas' government had taken a major new direction."

Eleven decades later, education continues to be a major issue. But Arkansas politics have flipped in the 21st century from deep blue to vivid red.

Print Headline: Politics of the past