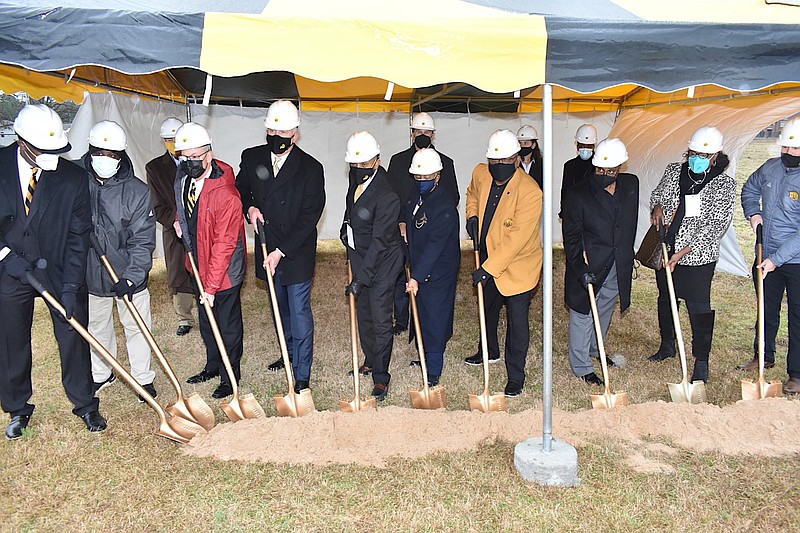 Jefferson County is considering giving UAPB $3 million toward a soccer and track-and-field facility that would create space that could be used during emergencies. In this file photo taken in January, ground is being broken on the new facility. (Pine Bluff Commercial file/I.C. Murrell)

The Jefferson County Quorum Court is on the verge of considering giving $3 million to the University of Arkansas at Pine Bluff that would go toward a sports facility that could also be used to accommodate citizens during emergencies.

A memorandum of understanding laying out the agreement is set to be considered this evening by a committee of the justices of the peace. If approved, the measure would go before the full Quorum Court at next week's meeting.

"This could be used as a mass vaccination clinic during a pandemic or as a shelter where displaced people can go during a natural disaster," County Judge Gerald Robinson said.

"We don't have that type of space right now."

The money would come from the American Rescue Plan Act, with the stipulation that UAPB has to spend the money in two years or return it.

Robinson said the money would help the university in its effort to build a new soccer and track-and-field facility, but that the facility would double as emergency space for the county and could be used in such a manner at the county's discretion.

"Mayor Shirley Washington and I and others have studied this, and we in this area really do not have an area that we could use in these types of emergencies," Robinson said. "This will be an open-air area that we can get in and out of and be able to handle 200 to 300 people at a time."

The university broke ground on the sports venue in January with an expected opening of the first phase of the project in September 2023.

UAPB Athletic Director Chris Robinson said the project was a win-win for UAPB and the county.

"I think as we continue to work together and pull together, the better we are as a community," Chris Robinson said.

"This helps us grow."

Chris Robinson said the space at the sports facility that could be used in case of emergencies would have been useful during the winter water failure that occurred in February 2021.

At that time, water pressure from Liberty Utilities got so low that the university had to close dormitories and take students to Little Rock to be housed temporarily in hotels. Businesses and other entities, such as Jefferson Regional hospital, had to close or were sidelined during the outage, and many residential customers had no or very little access to water.

Chris Robinson said price tag on the new sports venue was in the $10 million to $11 million range.

To date, the university has picked up funding from public and private entities as various project phases are planned and implemented, he said.

"This $3 million would put us in a sweet spot and gives us the ability to continue to work toward the completion of the project," Chris Robinson said. "We're not at $11 million just yet, but this certainly puts us a lot closer."