TELEVISION: What will season 2 of ‘House of the Dragon’ bring? 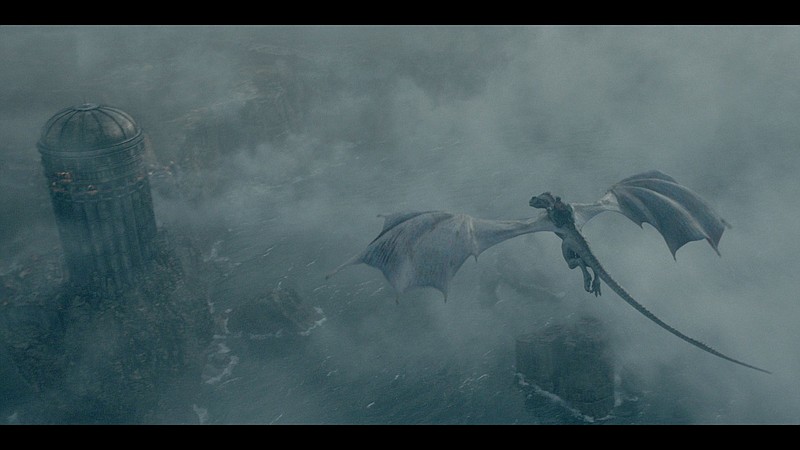 The dragons had a big role in the “House of the Dragon” finale. (HBO)

"The Black Queen," Oct. 22's Season 1 finale of HBO's massive hit "House of the Dragon," didn't lack for ambition. The episode had an extended, midair dragon-on-dragon chase scene, the third(!) harrowing birth/death scene in only 10 episodes, the untimely death of a young character, and Seven Kingdoms on the brink of war preceded all season by character scheming, time jumps, and the prolonged leprosy spiral of King Viserys (the great Paddy Considine). He finally rotted off this mortal coil in Episode 8.

What the finale didn't have, though, was catharsis. (That's not the name of one of the dragons; you're thinking Caraxes, Vermax or Vhagar.) In its final shot of Queen Rhaenyra's sneering facial expression, the show appeared to answer the question of whether war will erupt for the Iron Throne. But that war has been punted to Season 2, which isn't expected to land until late 2023 or early 2024 at the soonest.

"Dragon" fans who might have been expecting an epic battle — perhaps another go at the always-contested Stepstones, or an ill-timed, premature siege of Dragonstone or King's Landing — didn't get their blood lust sated. But it's fairly fitting because "House of the Dragon," which is much more limited in scope than its predecessor, "Game of Thrones," has been very talky in its first outing. Many episodes consist of posturing men and a couple of long-suffering women arguing around egg-holding council or candlelit war-room tables over what Lords of the Seven Kingdoms they can trust. And although it has showed that it can do fight scenes — especially the Crab Feeder battle in Episode 3 — it's mostly a show that has beaten the theme of succession deeper into the ground than the actual HBO series titled "Succession." When it comes down to it, it's ultimately about two childhood friends, Queens Alicent (Olivia Cooke) and Rhaenyra (Emma D'Arcy), finding themselves on opposite ends of a bloody, winner-take-all fight for that Iron Throne.

The talking, at least, is purposeful. The fictional history text the show is based on, George R.R. Martin's "Fire & Blood," is completed and will guide the forthcoming seasons, unlike the unfocused, poorly paced last part of "Game of Thrones," where the scripts outran the still-in-progress source book material.

Anyone curious about how these power plays will conclude or who will die first on the TV screen can read the book or study the Wikis. But for those of us who enjoy watching the dragon drama unfold in real time, without such spoilers, there's still a lot to be excited about. What began as turgid and claustrophobic, with jarring time jumps, found itself by midseason, and soared like a majestic, well, dragon, toward the finale with sharper plot turns, solid acting and increased stakes.

Going forward, the producers promise no more time jumps and recasting, war scenes to correspond with the book's "Dance of the Dragons" storyline, and more expanded geography that will take the world of the show beyond its frequently drab settings of King's Landing, Driftmark and Dragonstone.

But for viewers who are hooked and ready for the next installment, there are already several questions that need to be answered from this past season.

Many will be most curious about the immediate impact on Rhaenyra of the two back-to-back deaths of her children and how much it will derail her desire to unite the Seven Kingdoms. They'll also want to know whether that awful scene with Daemon choking her over resentments with his dead brother Viserys (who also happened to be his father-in-law; incest is messy) will lead to a schism between Dragonstone's power couple.

Will the sneaky, clubfooted Lord Larys continue to play Queen Alicent for his sexual gratification and as-yet-unrevealed ambitions, or will Otto Hightower or the increasingly foolhardy Ser Criston Cole get wind of Larys and try to stop him? Most likely: his cunning will win out, at least over Cole.

Aegon, the newly crowned King, has real Joffrey-from-"Game of Thrones" energy. How cruel and ugly will his behavior get, and will brother Aemond try to keep him in line? Can Grandpa Otto, with his banality-of-evil, big-picture scheming, manipulate Aegon the way he did Alicent? Can Corlys finally get a good battle scene to show off why he's called "the Sea Snake?"

And what about those dragons? The finale demonstrated that the dragon riders have only so much control over these terrifying creatures. What happens if they go rogue and burn everything in sight, laying waste to the kingdoms Rhaenyra is trying to preserve?

Season 2 has plenty of opportunity to build on the growing audience for this "Game of Thrones" prequel, and to become a worthy successor — something that at first seemed impossible after the show's dry debut. All "House of the Dragon" needed was a chance to spread its wings and prepare for next season's fiery shock and awe.