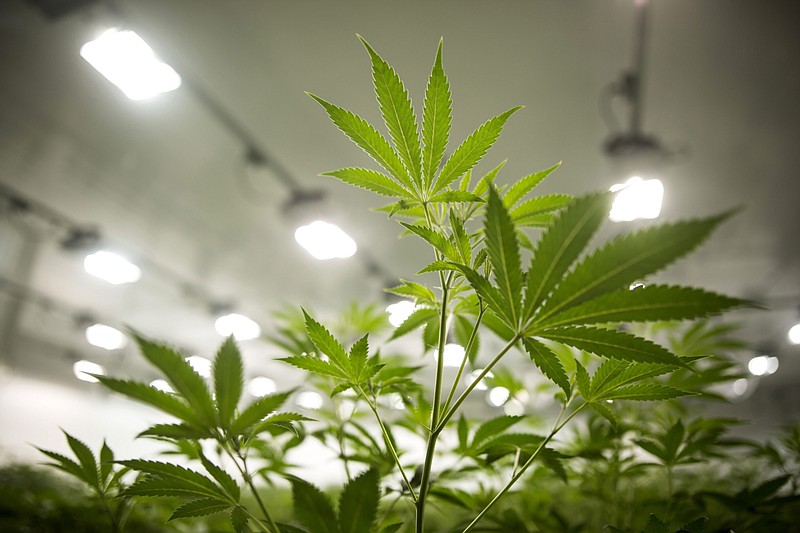 Marijuana plants grow in the Mother Room at the Canopy Growth Corp. facility in Smith Falls, Ontario, on Dec. 19, 2017. MUST CREDIT: Bloomberg photo by Chris Roussakis.

Pulaski County Circuit Judge Herb Wright said he expects to decide by the end of the week whether to strip a Fort Smith medical marijuana grower of its cultivation license, the final one to be awarded, over accusations that state regulators wrongly awarded the license two years ago.

Little Rock company 2600 Holdings LLC, operating as Southern Roots Cultivation, disputed the licensing award in a lawsuit in January 2021, suing the state regulators, the Arkansas Medical Marijuana Commission and the Department of Finance and its Alcoholic Beverage Commission.

Southern Roots wants the judge to revoke the license and order the regulators to give it to them. The Arkansas Constitution allows only eight cultivation licenses.

Now, after a trip to the Arkansas Supreme Court, where justices found the state agencies could not use sovereign immunity to block the litigation, Southern Roots lawyers say they've amassed enough proof -- including testimony from Medical Marijuana Chairman James Miller and Alcoholic Beverage director Doralee Chandler -- to show the license was improperly awarded and that Southern Roots is entitled to summary judgment.

Further, Southern Roots says that since the regulators missed a deadline to respond to the lawsuit, the judge should disregard their late answer, as allowed under court rules, disallow the state's defense and rule in the company's favor. The state agencies are asking the judge to dismiss the lawsuit.

The grower's license went to Fort Smith hotelier Bennett "Storm" Nolan whose River Valley Production LLC of Fort Smith is producing marijuana as River Valley Relief Cultivation. Nolan and River Valley were not named as defendants in the suit, but Nolan petitioned the judge Monday to be allowed to join the litigation since a Southern Roots win "may destroy [Nolan's] multi-million dollar investment" to build its growing facility.

Nolan, represented by attorney Matthew Horan of the Smith, Cohen & Horan firm of Fort Smith, argues that the Arkansas Rules of Civil Procedure and court precedent require that he be allowed to oppose Southern Roots so he can protect his interest in the outcome.

In the 14-page pleading, Nolan states that if the judge allows him to challenge Southern Roots' lawsuit, he will argue that the case should be dismissed because, among other things, Southern Roots is ineligible to receive a cultivation license since the medical marijuana constitutional amendment only allows people, not companies, to hold the licenses.

If the judge won't dismiss the suit, Nolan wants him to delay a decision on Southern Roots' summary judgment motion until he and his lawyers have had enough time to investigate the case and mount a defense against that motion.

In its pleadings, Southern Roots disputes that Nolan should be allowed to intervene because his River Valley company did not exist when the license was awarded, which prevents him from having any protected interest in the litigation.