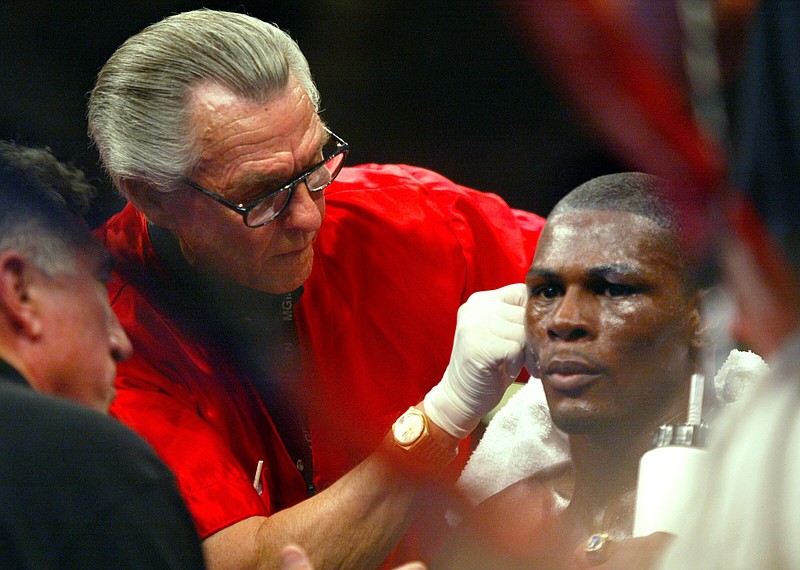 Ray Rodgers spent a lifetime leveling the incongruities of good humor and fixing cuts on the faces of fist fighters. Beyond mending the wounds of professionals, Rodgers was at the heart of amateur boxing in Arkansas and across America.

He died Tuesday at his son Michael Rodgers' home in Nashville, Tenn., where he spent the final three years of his 86-year life after a years-long bout with Alzheimer's.

Michael Rodgers said that shortly before his father died, he told him not to worry about the state of amateur boxing.

Michael Rodgers is the current president of Silver Gloves and Golden Gloves Boxing, titles held by Ray Rodgers for a total of 48 years.

"Ray's sacrifice to countless youth as a coach, mentor, cut man, and leader throughout the amateur boxing community is inspirational," said USA Boxing Alumni Association executive director Chris Gugliari when Rodgers' induction was announced. "His years of service and the knowledge he has passed on to other generations is what makes him a hall of famer."

Boxing authorities and followers understand the importance of cut men, the specialists who serve ringside for professional boxing matches to seal bleeding wounds. Rodgers' expertise was such that he worked corners in 39 professional world-championship matches, including those for Jermain Taylor, the Arkansan who remains the last undisputed middleweight champion, meaning his championship was recognized by each of boxing's sanctioning organizations.

Taylor won his title with Rodgers in his corner when he defeated middleweight champion Bernard Hopkins in Las Vegas on July 16, 2005.

Taylor was cut during the fight, and many experts thought the wound was one from which he would not recover. However, Rodgers' treatment stemmed the bleeding to little more than a trickle, and Taylor continued through to a 12-round, split decision for the championship.

Rodgers enjoyed his work as a cut man.

"I enjoyed being a laceration management specialist, as I like to call it," he had said. "I apprenticed under some great, old cut men, and I'm glad I did because I knew how to handle it."

Rodgers was born in Shawnee, Okla., on Oct. 1, 1936, but he spent the latter stages of his childhood in Conway. Overweight as a boy, Rodgers said he was nicknamed "Butterball" as a seventh-grade football player by former Conway junior high, senior high and University of Central Arkansas head football coach Raymond Bright.

"All my friends from back then still call me 'Butterball,' " Rodgers said years ago. "I wear it with a good deal of pride."

Rodgers spent six years in the U.S. Army and later retired as a member of the U.S. Army National Guard, but he otherwise remained in Arkansas throughout his adult life. His love for boxing began as a fifth-grader in Tecumseh, Okla., when he earned a letter for his place on the Tecumseh High School boxing team.

Rodgers said good spirits were key to his 70 years in boxing and important to all around him.

"I would hate to think what amateur boxing would be without Ray Rodgers," he said.

"Ray kept boxing going in Arkansas for, I don't know, 25 or 30 years," said Allan Nader, 77, the boxing coach at Morrison Boxing Club in Maumelle. "He was a major player in amateur boxing, both in Arkansas and around the country."