Nation using World Cup to showcase its culture, history and identity by NARIMAN EL-MOFTY The Associated Press | November 3, 2022 at 3:54 a.m. 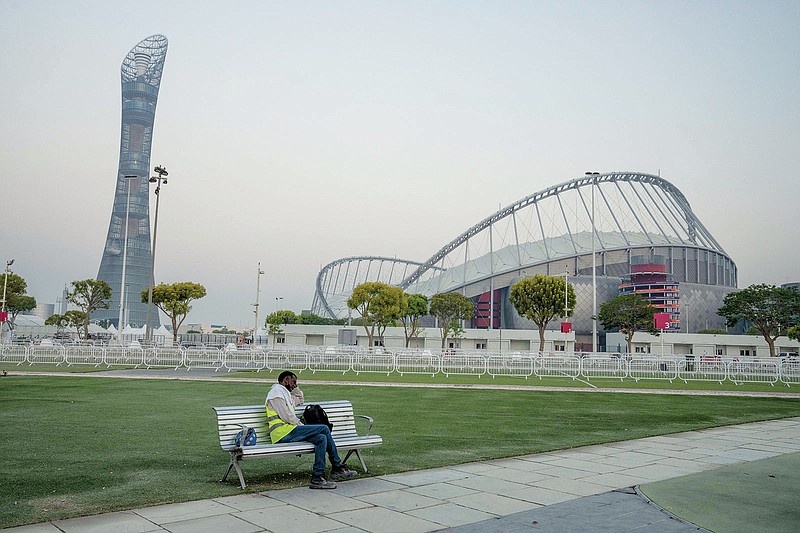 A migrant worker sleeps on a bench Oct. 15 before his early morning shift in front of Khalifa International Stadium, also known as Qatar's national and oldest stadium, which will host matches during FIFA World Cup 2022, in Doha, Qatar. (AP/Nariman El-Mofty)

In a few weeks, the tiny emirate jutting out into the Persian Gulf will welcome the world when it hosts the biggest sporting event to ever be staged in the Arab region. Soccer's World Cup is coming, and with it so much scrutiny but also plenty of intrigue.

Qatar is using the World Cup to showcase its culture, history and identity for the estimated 1.2 million visitors traveling in for the Nov. 20-Dec. 18 tournament and for the many more watching on TV, too.

Like, for example, camel racing -- a symbol and hallmark of Qatari culture and one of the oldest sports in the country. Away from the glittering lights, shopping malls, skyscrapers and towers in Doha, men gather before sunrise at a racetrack in the Al Shahaniya municipality to train their camels for upcoming races. The camels are held by their handlers at the beginning of the training exercise and accompanied off-track by their owners in vehicles to check on their sprint times. The camels are guided by their owners with a microphone and simultaneously whipped by modern robot jockeys fixed on their backs. The Qatari government has placed a legislative ban on the practice of using children as jockeys, replacing them with robots.

Not far away, Fahad Bin Mohammed Al-Attiyah awaits visitors at his eco-conscious farm. The group running the Caravane Earth Foundation and Haneet Salma farm is eager to promote ethical approaches to local and innovative ways of farming and agriculture. The farm grows desert-friendly plants and vegetables and has its own philosophy around wellness and health. There is a platform where Diksha, a yoga teacher from India, gathers her students for classes in the natural environment of the farm.

Tour guides are ready to show tourists the natural -- and largely unknown -- side of Qatar, like the soft sand dunes of Khor Al Adaid Inland Sea, where the sand and sea meet on the border between Qatar and Saudi Arabia in Mesaieed, Al Wakrah state.

Back in central Doha, The Irish Pub does a brisk trade, with soccer on TV screens dotted around the bar and a woman performing live music on a stage as face mask-wearing baristas serve Guinness and pour beers. Qatar, a Muslim-majority country, has strict rules regarding alcohol -- it can only be served in hotel restaurants and bars that have licenses, and it is illegal to be drunk or to drink in public -- but has had to relax its regulations, with soccer fans from 31 other nations set to provide a boisterous atmosphere on Doha's streets.

Inside the Souq Waqif -- a sprawling marketplace in downtown Doha that is sure to be popular with tourists because of its restaurants, cafes and stores -- a falcon perches on the left wrist of man lounging on a long bench in front of his shop and scrolling through his cellphone. Falconry is one of the most prevalent sports in Qatar, indeed the Arabian Peninsula as a whole, and there are specialist stores run by falconers, who have the for-sale birds on display on their perches.

The pastime of falconry contrasts so sharply in Qatar with the phenomenon that is soccer, with the emirate's vistas now containing specially constructed, futuristic stadiums for the World Cup. In front of the Khalifa International Stadium, a migrant worker sleeps on a bench before his early morning shift. Qatar has faced criticism about its treatment of migrants, who have swelled the nation's workforce after coming to help build stadiums and tournament infrastructure.

Migrants gathered on Doha's famous corniche to represent their communities 30 days ahead of the World Cup. Adnan, a migrant driver from Peshawar in Pakistan, lives in a two-room apartment in Al Warkah with 11 people. He is looking forward to the World Cup for economic reasons.

"I will not be attending the matches unfortunately," he says, "but this will be a great opportunity for me to make more money during the World Cup." 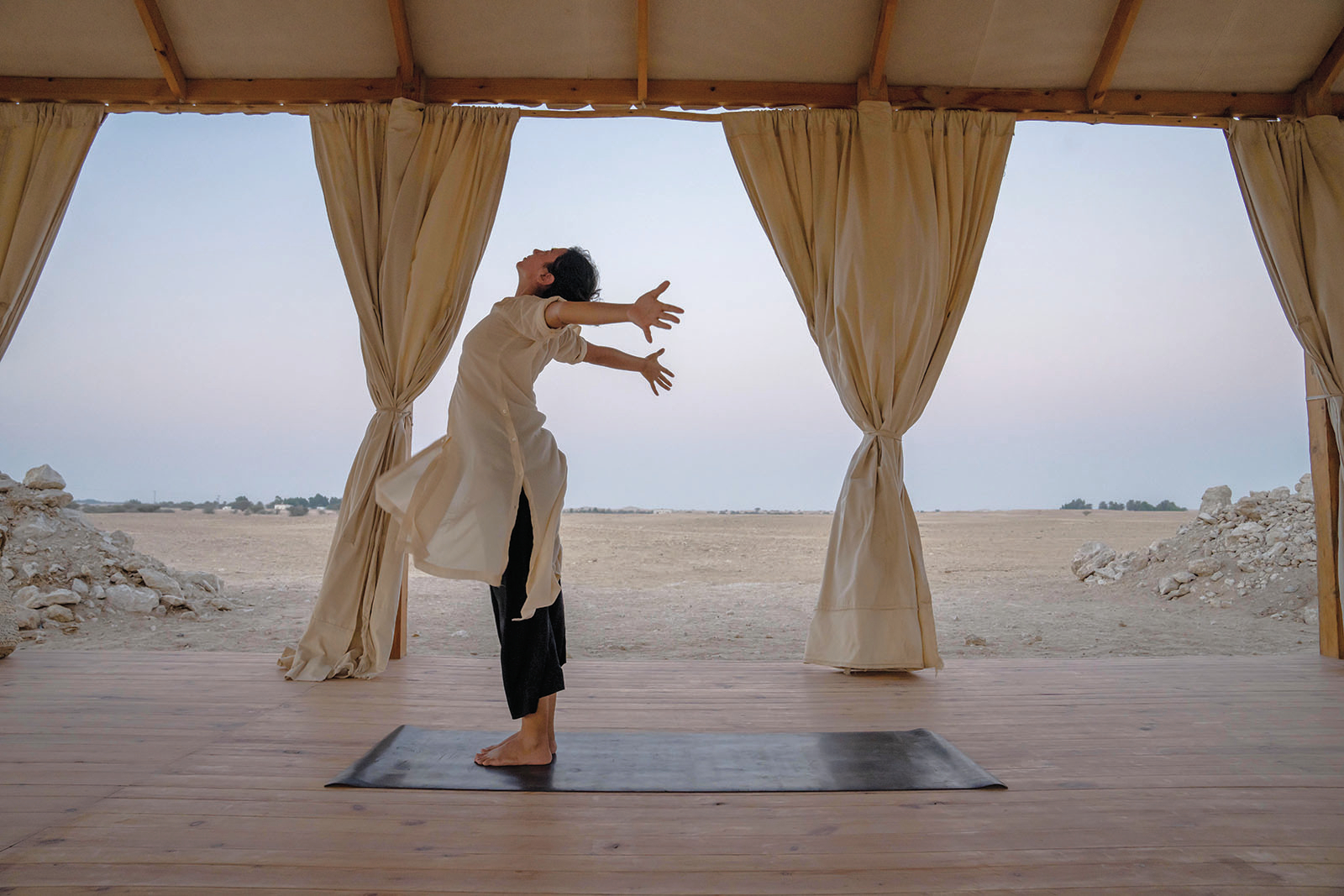 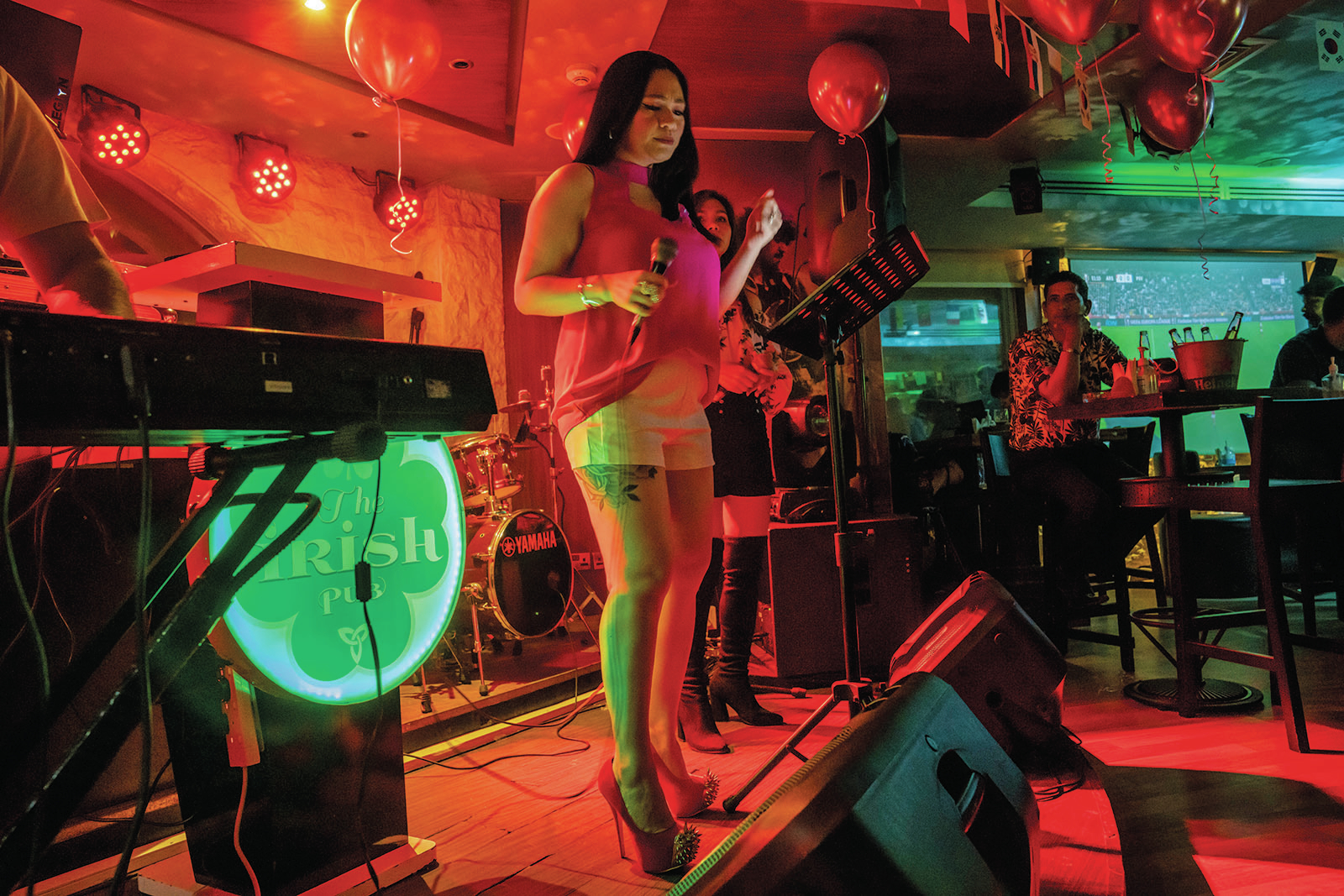 A woman sings Oct. 20 at "The Irish Pub," which will be one of the bars showing World Cup 2022 matches on live screens, in Doha, Qatar. (AP/Nariman El-Mofty) 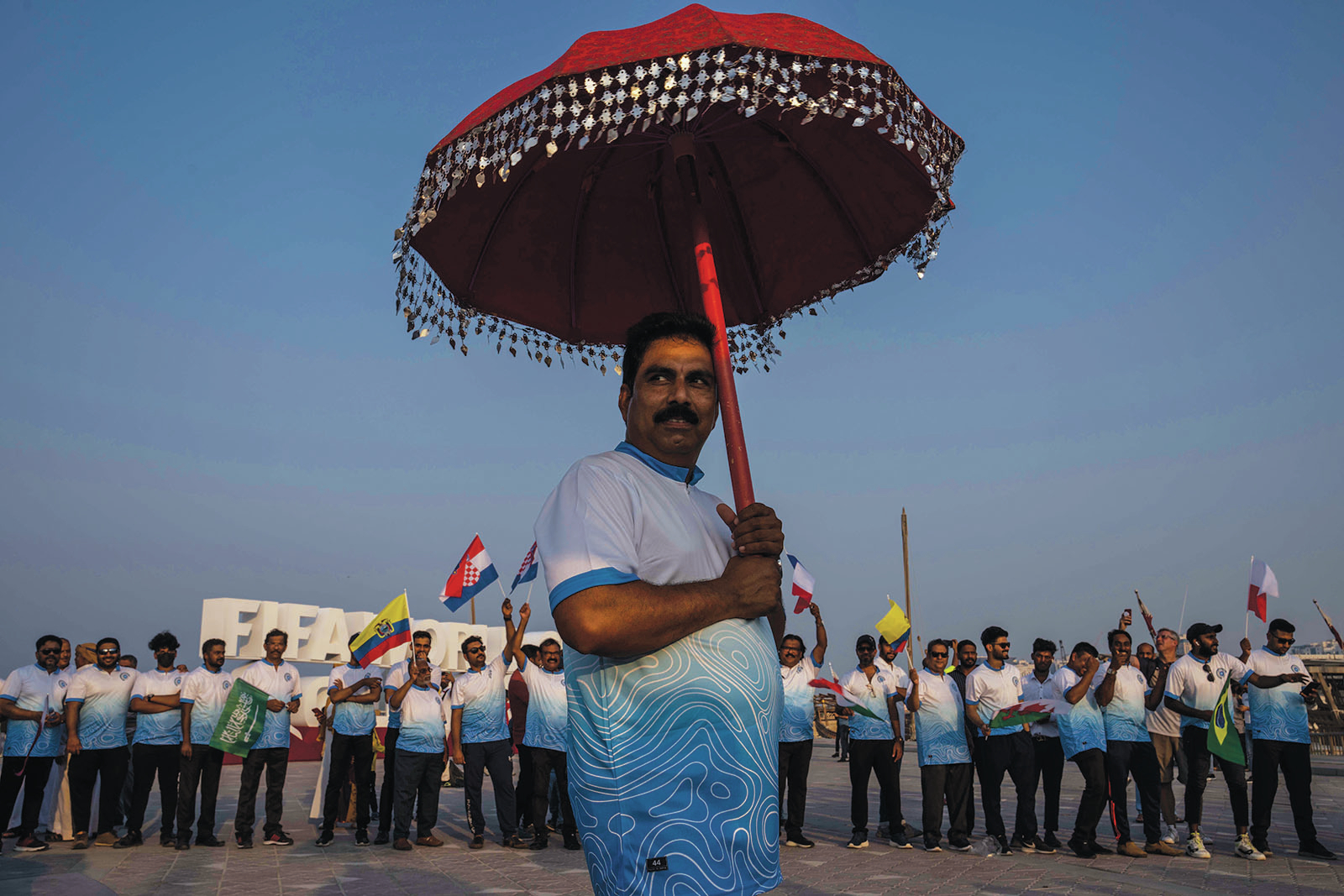 Indian football fans gather Oct. 21 in front of the official FIFA World Cup Countdown Clock on Doha's corniche to celebrate 30 days to go until the start of the World Cup in Qatar. (AP/Nariman El-Mofty) 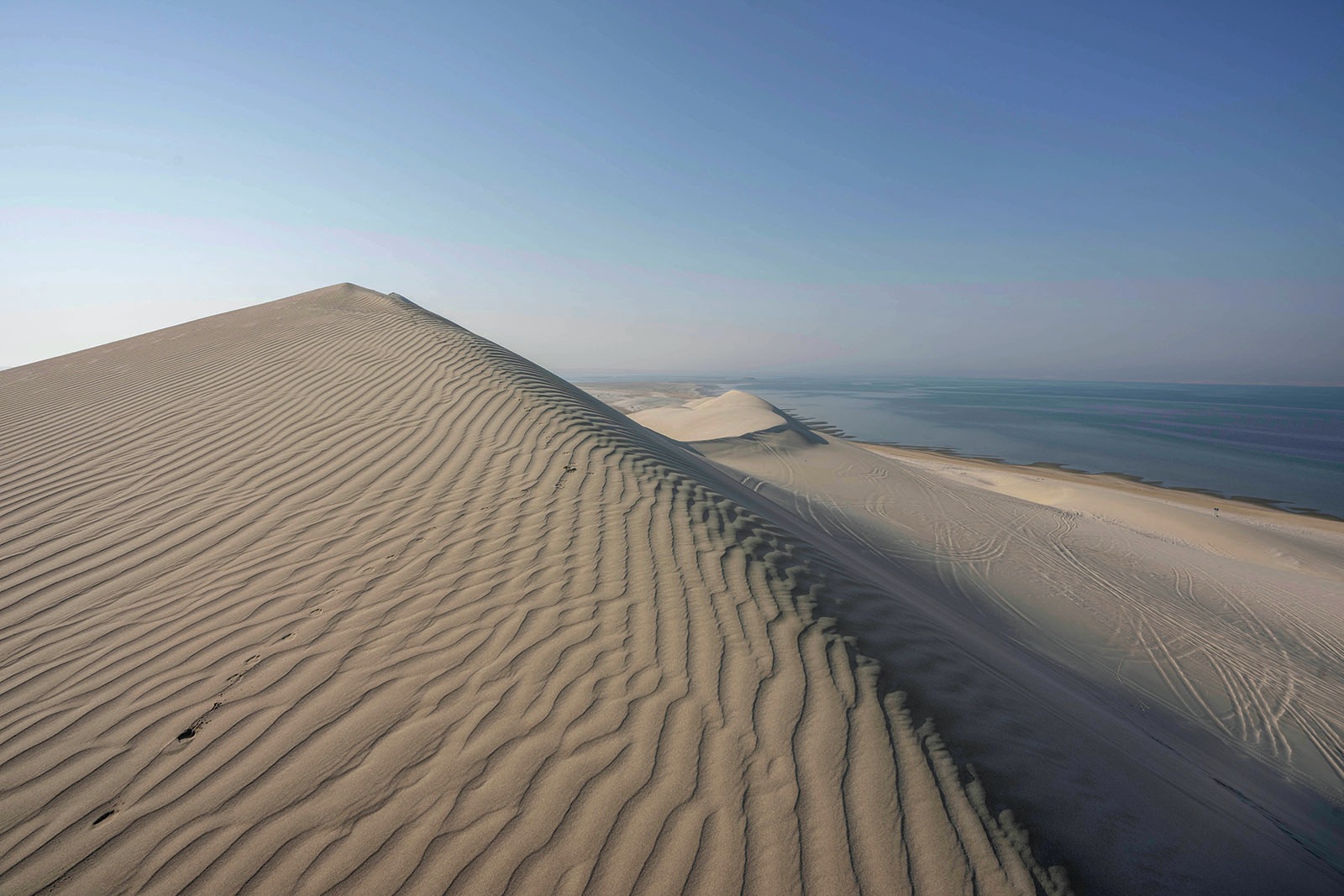 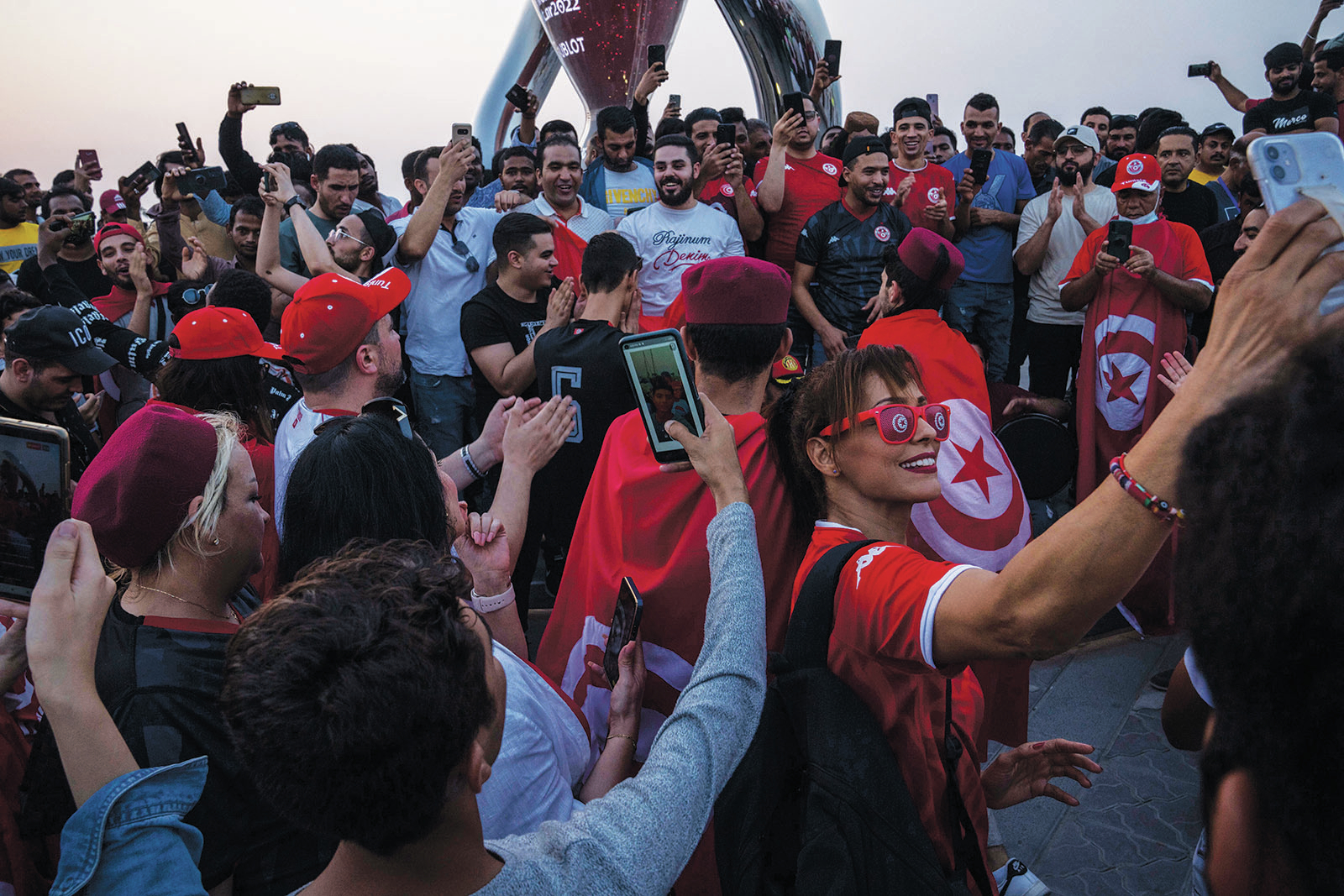 Tunisian football fans celebrate their team, who will be competing in the World Cup finals for a sixth time, on Oct. 21 in front of the official FIFA World Cup Countdown Clock on Doha's corniche in Qatar. (AP/Nariman El-Mofty) 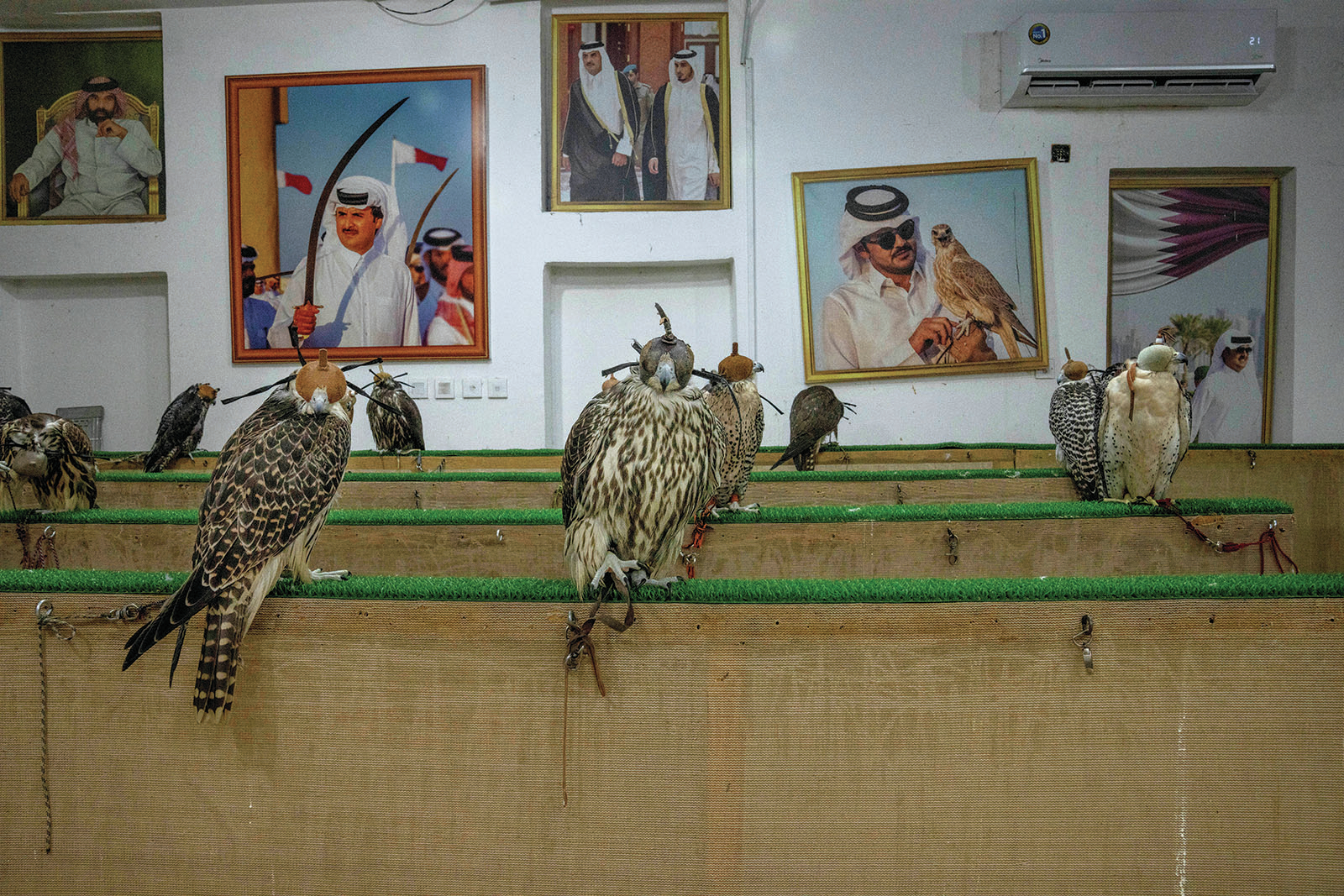 Falcons are displayed for sale Oct. 16 at a shop in Souq Waqif, Doha, Qatar. Falconry is one of the oldest and prevalent sports in Qatari culture and heritage. (AP/Nariman El-Mofty) 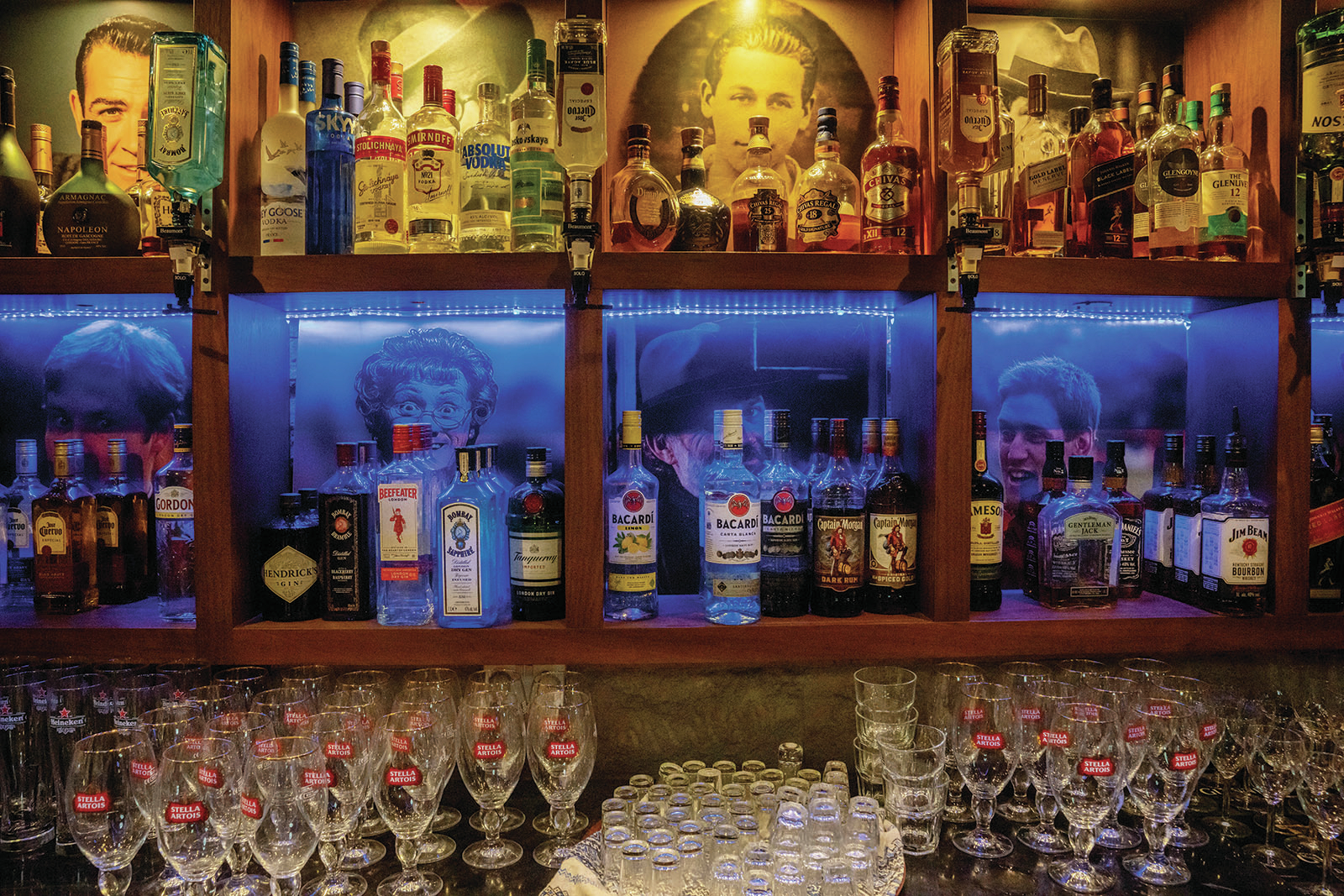 Bottles of liquor are displayed Oct. 20 at "The Irish Pub," which will be one of the bars showing World Cup 2022 matches on live screens, in Doha, Qatar. (AP/Nariman El-Mofty) 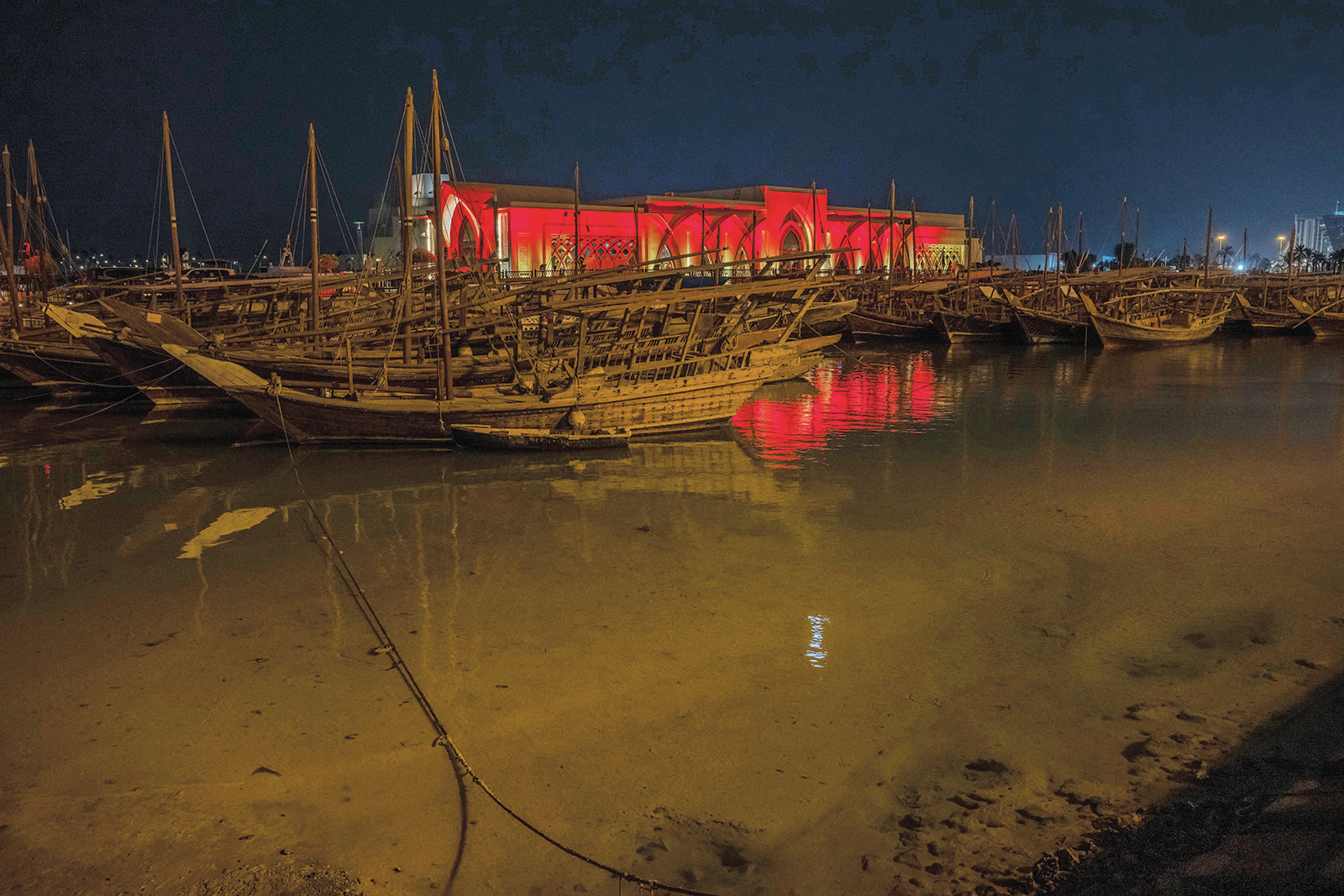