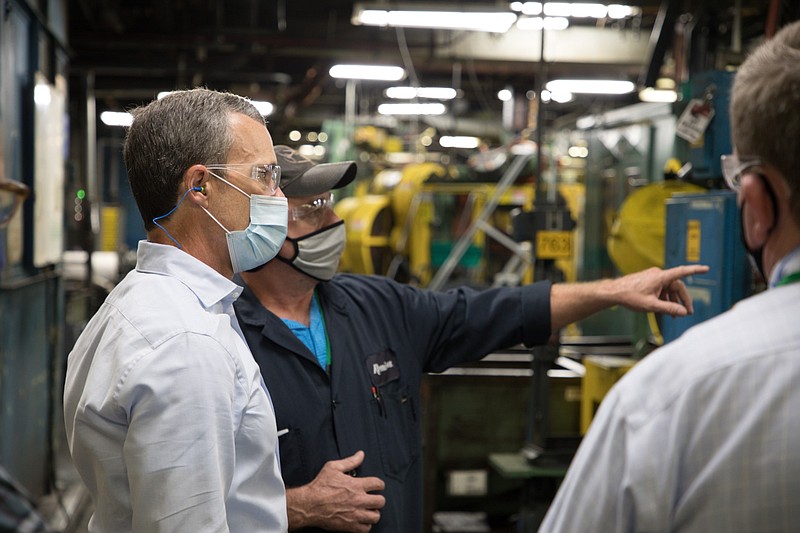 Chris Metz, chief executive officer of Vista Outdoor, tours the company's facility in Lonoke in this November 2020 file photo. The plant was the former Remington ammunition plant. (Special to the Arkansas Democrat-Gazette)

The parent company of Remington Ammunition said Thursday ammunition demand is normalizing while its workforce in Lonoke continues to improve production efficiency.

Revenue for the quarter was $781.7 million compared with $778.5 million for the same period last year.

"We continue to operate in a challenging global macroeconomic and geopolitical environment that has negatively impacted demand for our products and driven significantly higher costs over the last year," Chief Executive Officer Chris Metz said in a statement. "However, despite these headwinds, we posted another strong quarter with an increase in sales and continued strong profitability."

During a conference call with analysts Thursday morning, Vista Outdoor executives said demand for 9mm ammunition is leveling out and the acquisition of Remington and Hevi-Shot have allowed the company to better meet demand for rimfire, shot-shell and big-game ammunition.

"Remington employs slightly more than 1,000 employees today and we are hiring new employees every month," Eric Smith the company's corporate communications manager said in response to emailed questions. "In two years since Vista Outdoor took ownership of the plant, it has grown from one shift of employees to three full shifts, with many areas running 24/7. This is a significant shift from when we acquired Big Green when the plant would shut down at 4 p.m. each day. Now, we have employees making ammunition around the clock."

Smith said the company has invested in infrastructure upgrades across the plant for its long term success and to grow output to make better ammo at a lower cost for customers.

Minnesota-based Vista Outdoor formed in 2015 and now is made up of 41 outdoor brands, including bicycles, camping gear, golf and skiing equipment, optics and ammunition makers. It purchased Remington Ammunition out of bankruptcy in late 2020.

In May, Vista Outdoor said it would spin off its sporting product segment, which includes its ammo brands including Remington and its outdoor product segment, a move expected to be completed sometime in 2023.

Remington began production at the Lonoke facility in 1969. The operation includes 750,000 square feet of manufacturing space on 1,200 acres.