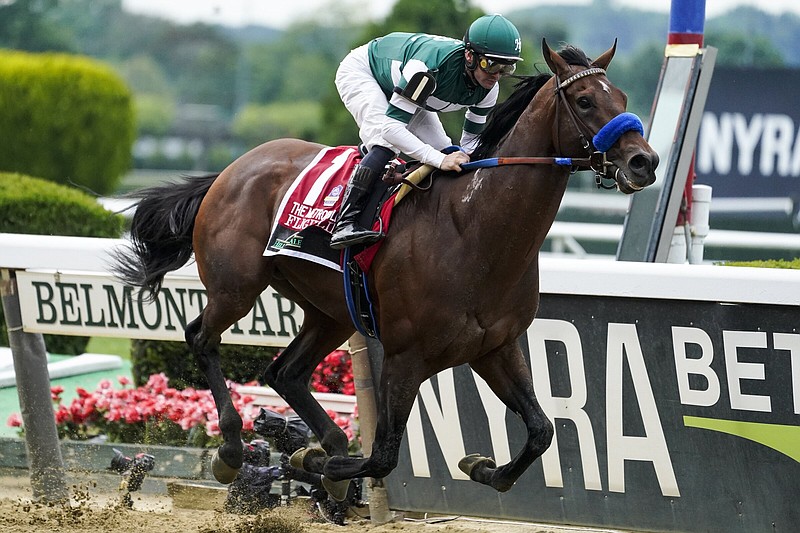 A horse named Flightline might be the most dominant competitor currently in any sport.

Of course, because it's horse racing, the average sports fan likely has no idea who he is and what his mark on sports history might be. The name recognition might get a little bump Saturday when he competes in the $6 million Breeders' Cup Classic at Keeneland Race Course in Lexington, Ky.

The Breeders' Cup is the two-day Super Bowl of horse racing with 14 races whose purses total more than $31 million. The event starts today with five races, all of them for 2-year-olds.

The Breeders' Cup has fallen into a predictable pattern of alternating the event between southern California and Kentucky. Last year, it was at Del Mar. Next year it will be at Santa Anita for a record 11th time.

But this year is all about Flightline, who some are calling the best horse since Secretariat.

To get a sense of what to expect, here are storylines for the two-day event:

How good is Flightline?

Strange as it sounds, it's unknown how good he can be. The 4-year-old has raced only five times and has been outside of California just once. An injury as the result of running into a fence slowed his career as a 2-year-old before he started racing. The recovery time forced him to miss the Triple Crown season. He won his first three races by 13 1/4, 12 3/4 and 11 1/2 lengths. In his only start outside California, he won the Metropolitan Mile by six lengths despite a very troubled trip. But the best was yet to come.

His toughest challenge was supposed to be the Pacific Classic at Del Mar about two months ago. It was his first time running 1 1/4 miles and there was a strong field of competitors. He won by 19 1/4 lengths and that's after jockey Flavien Prat asked for no extra effort down the stretch.

His biggest threat Saturday is considered to be Life Is Good, who has won nine of his 11 races, including last year's Breeders' Cup Dirt Mile. Also in the race is Rich Strike, the upset winner of the Kentucky Derby. If Flightline wins, the immediate question will be if he will return next year as a 5-year-old and give the sport a legitimate superstar or if he'll go off to a lucrative career as a stallion.

Is Bob Baffert allowed to run in Kentucky?

Yes, he can run horses at Keeneland and at Kentucky Downs. But he can't currently run at Churchill Downs Inc. tracks, which include Churchill Downs, Turfway Park and Ellis Park. Baffert is in the midst of a two-year ban from CDI tracks, something that still will be litigated long after the two years is over.

CDI issued the ban after Medina Spirit, last year's initial Kentucky Derby winner, tested positive for a legal medication but not legal on race day. Baffert has contended the horse was administered betamethasone by a topical ointment, not by injection.

Medina Spirit eventually was disqualified and Baffert suspended by the Kentucky Horse Racing Commission for 90 days, which he already has served and is still litigating. So these will be Baffert's first races in Kentucky since last May.

Will this tell us who will win the Kentucky Derby?

Probably not. Only twice has the winner of the Breeders' Cup Juvenile gone on to win the Kentucky Derby. Street Sense did it in 2006/2007 and Nyquist did it in 2015/2016. It's a long time between November and May. Some horses just don't develop. Many get injured. Others just can't make the distance increase from 1 1/16 miles in the Juvenile to 1 1/4 miles in the Derby.

Cave Rock, for Baffert, is expected to be the favorite, having won all three of his races, two of them Grade I stakes.

Will all the best horses be at the Breeders' Cup?

For the most part, yes. The top 10 horses in the latest National Thoroughbred Racing Association poll will all be there. They are, in order, Flightline (Classic), Life Is Good (Classic), Epicenter (Classic), Nest (Distaff), Olympiad (Classic), Malathaat (Distaff), Taiba (Classic), Jackie's Warrior (Sprint), Hot Rod Charlie (Classic) and War Like Goddess (Turf).

Even though there is no 11th place, there has to be special note for Lava Man, the 21-year-old Hall of Famer, who is retiring to Old Friends farm in Lexington after leading Hot Rod Charlie to post. He has been a stable pony for trainer Doug O'Neill since 2010, helping teach young horses.

Will weather be a factor?

It should be perfect racing weather. There is a chance of rain Saturday but it is supposed to be early and late. Keeneland last played host to the Breeders' Cup in 2020, meaning it has had the event two of the past three years. In 2020 there was no crowd because of pandemic restrictions.