Like the song by former Greenwood standout Jabe Burgess suggests, this is a football town by Rick Fires | November 4, 2022 at 3:00 a.m. 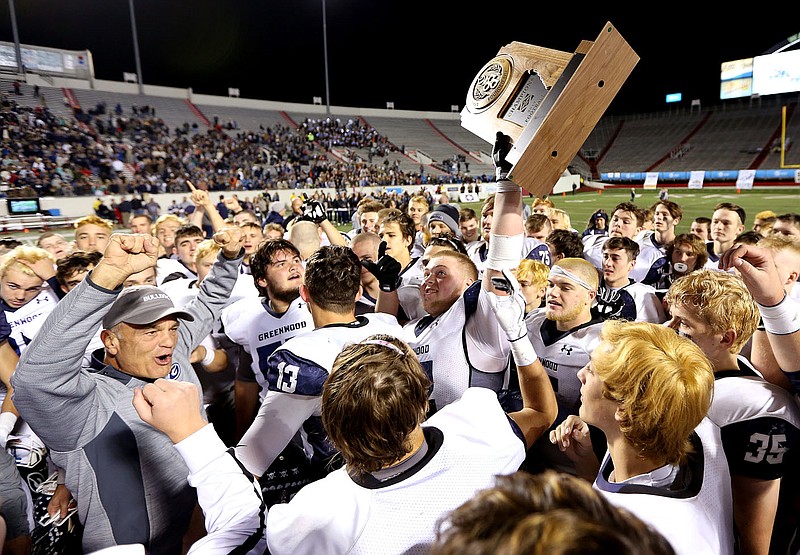 GREENWOOD -- Lots of folks can claim they're from a football town, but very few can sing about it and put it on a record.

"I'm from Greenwood, Arkansas," former Bulldogs quarterback Jabe Burgess told those in the music business shortly after he arrived as a singer/songwriter in Nashville. "It's a football town. It's kind of what we're known for."

Greenwood is well-known in Arkansas as a football town with 10 state championships, all since 2000. Burgess released a single called "Football Town" and Greenwood is featured prominently in the video with the catchy line "when two-hand touch turns to tackle."

Greenwood began its rise as a football power under Ronnie Peacock, a former receiver at Harding University who brought a wide-open passing game with him and made stars of players like Josh Bell, who caught 111 passes while leading the Bulldogs to the Class AAAA state championship in 2000. Greenwood had some lean years after Peacock left for Rogers but the program quickly ascended to new heights with the arrival of Rick Jones, a former college assistant who at the time was building powerful high school programs in Oklahoma at Edmond North, Tulsa Union and Broken Arrow.

Jones was familiar with top coaches in Arkansas like Peacock, Gus Malzahn and Barry Lunney Sr. and what they were doing in the passing game, but it was his barber in Tulsa, a former Greenwood resident, who helped sell him on the potential of the Greenwood program, which Jones learned was actually located near Fort Smith and not Fayetteville when he confused Greenwood with Greenland.

Greenwood is distinctive in Arkansas with a clock tower located in its town square, which also includes a memorial, mural and a statue that honors coal miners and coal mining from the early days of Sebastian County.

"Crazy thing is that the guy who cut my hair when we were in Broken Arrow, Brian Joiner, was from Greenwood," Jones said. "Every time I got my hair cut, Brian would not stop talking about what a great place Greenwood was. He eventually helped me move there."

Good thing Joiner did because Greenwood exploded as a statewide power under Jones, who won eight state championships and 12 league titles in 16 seasons with the Bulldogs. Greenwood became an offensive juggernaut with a string of standout quarterbacks like Daniel Stegall, Brooks Coatney, Burgess, Peyton Holt and Connor Noland, who turned to baseball at Arkansas, and Tyler Wilson, who became an All-SEC quarterback for the Razorbacks. There are family ties as well with receiver Drew Morgan and linebacker Grant Morgan, brothers who continued their careers at Arkansas and had some time in the pros.

Opponents of the Bulldogs anticipated an opening for renewed success with Jones and his record of 185-26 gone from Greenwood. But that theory was slammed shut on 2020 when offensive coordinator Chris Young was promoted to head coach and led Greenwood to a 14-0 record and Class 6A state championship in his first year at the job.

"Chris is doing great," Jones said days after Missouri won an important SEC game at South Carolina. "He was uniquely prepared for the job. He was hired by Ronnie and coached with Harv (Welch) and was with us the whole run. He is the perfect person for the job. He will adjust and change what needs to be changed."

That was a particularly tough year with the country and much of the world in the grips of the covid-19 pandemic.

Young spoke passionately about winning the championship about the difficulties young student-athletes had to endure in their daily lives.

"This year has been a difficult year for teenagers and young people in general," Young said shortly after the Bulldogs beat Lake Hamilton 49-24 in the 6A finals. "The rules for them changed. They're not able to hang out with their friends or be in large groups and just be kids. But for one time on Saturday night, they were able to not think about covid, not think about social distancing and spreading out. They were able to celebrate a state championship with their buddies and just be kids."

Normalcy has returned and Greenwood is primed again for another deep run in the playoffs with a record of 8-1 heading into tonight's final league game at 6A-West newcomer Little Rock Christian. The Bulldogs have won eight consecutive since a season-oping loss to Stillwater, Okla., and they knocked off highly regarded Pulaski Academy, another conference newcomer, 33-23 at Smith-Robinson Stadium two weeks ago.

New stars continue to emerge at Greenwood, including quarterback Hunter Houston, receivers Grant Karnes and Peyton Presser, and freshman Kane Archer, who replaced the injured Houston and guided the Bulldogs to three scoring drives over the final 14 minutes against PA.

Greenwood knows its work is far from finished and the Bulldogs could meet Pulaski Academy in a rematch in the playoffs. But that possibility, should it happen, won't phase Greenwood, a football town where two-hand touch turns to tackle.

Rick On The Road — Football Towns

Each week, award-winning Northwest Arkansas Democrat- Gazette sports columnist Rick Fires will go on the road across the region, visiting communities where football is an integral part of the Friday night fabric. Award-winning photojournalist Charlie Kaijo will document the journey through interviews and photographs that illustrate what makes each town a football town. 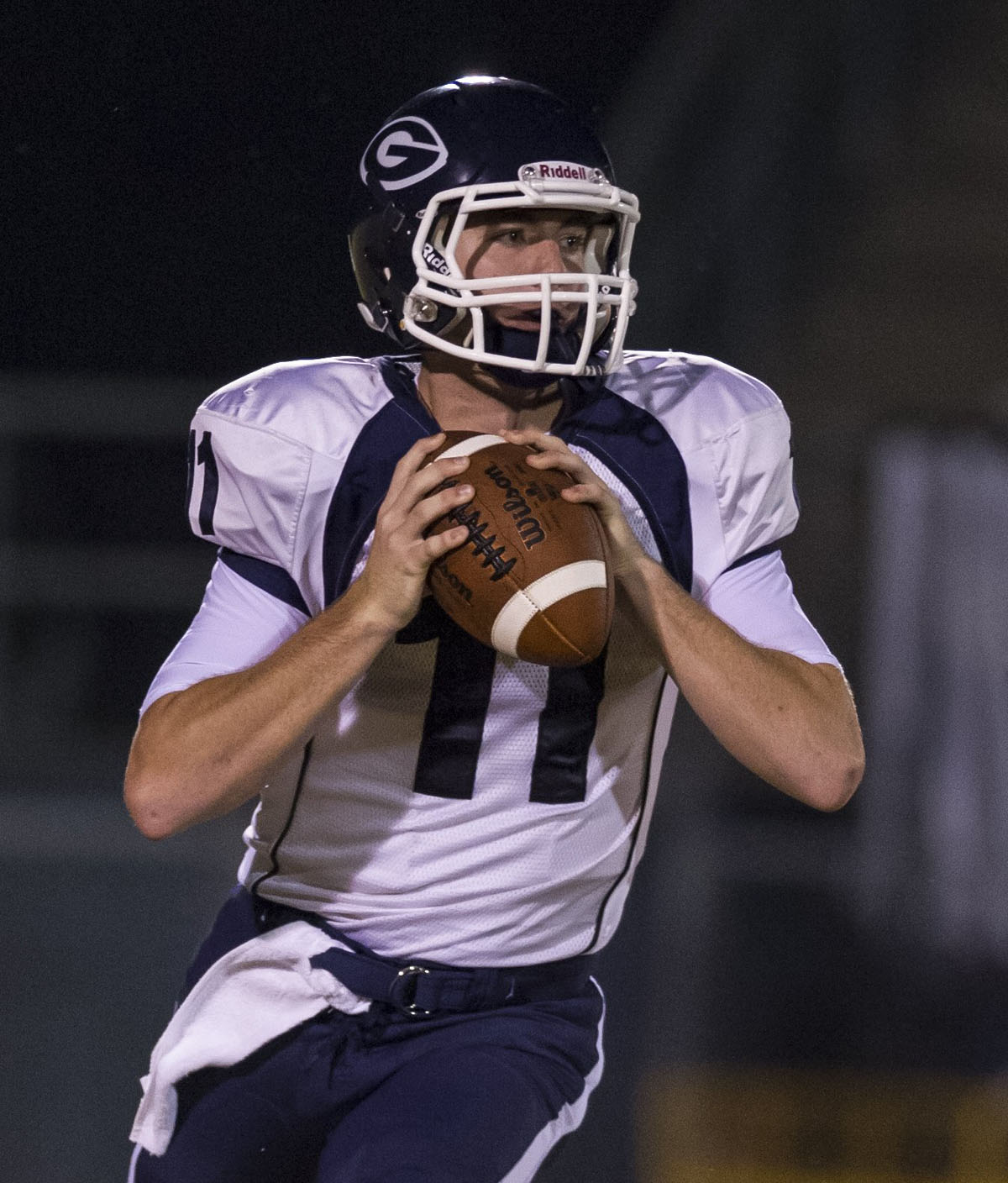 FILE PHOTO Jabe Burgess is a former quarterback who won two state championships at Greenwood. He's now a singer/song writer in Nashville, where he recently released the single "Football Town." 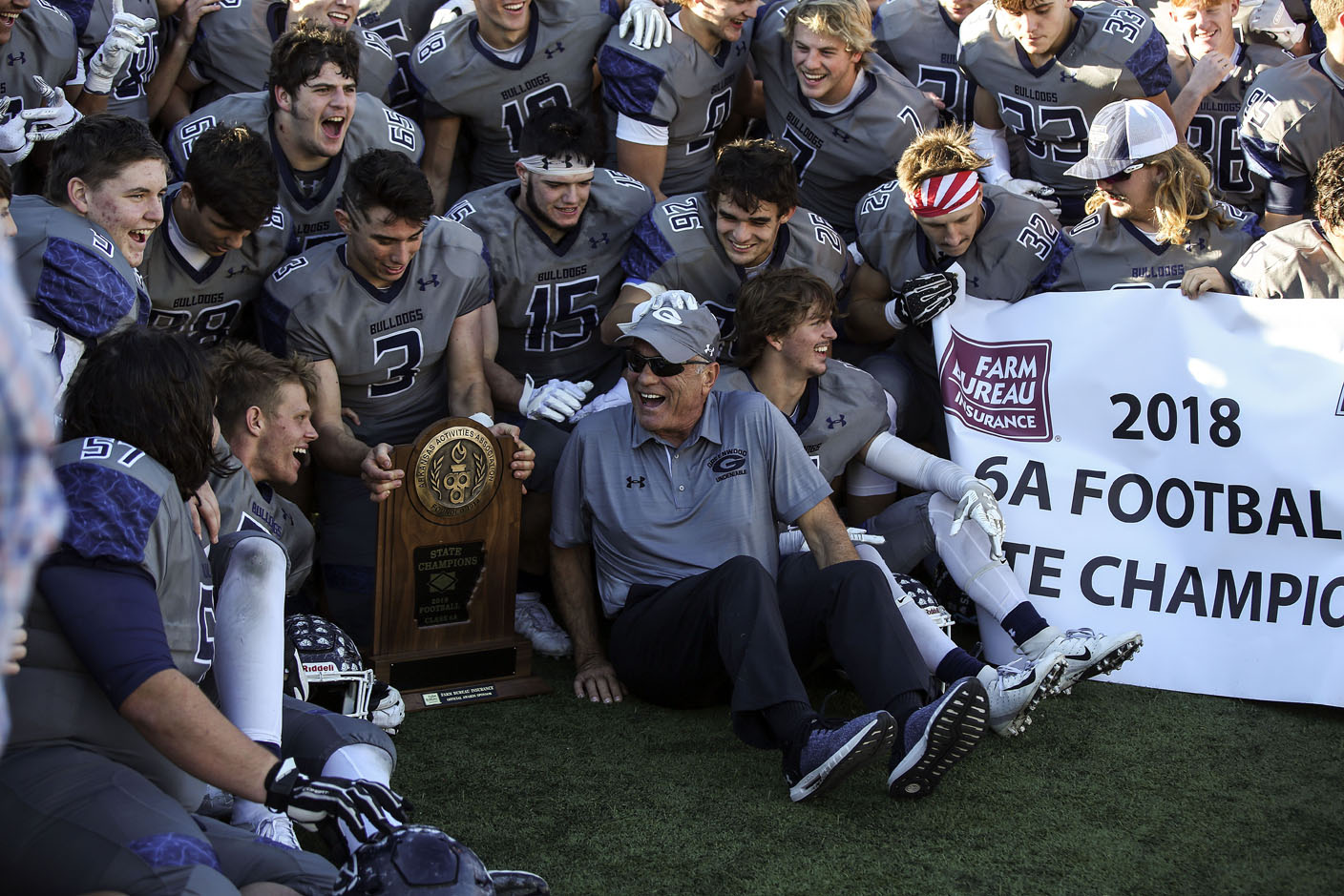 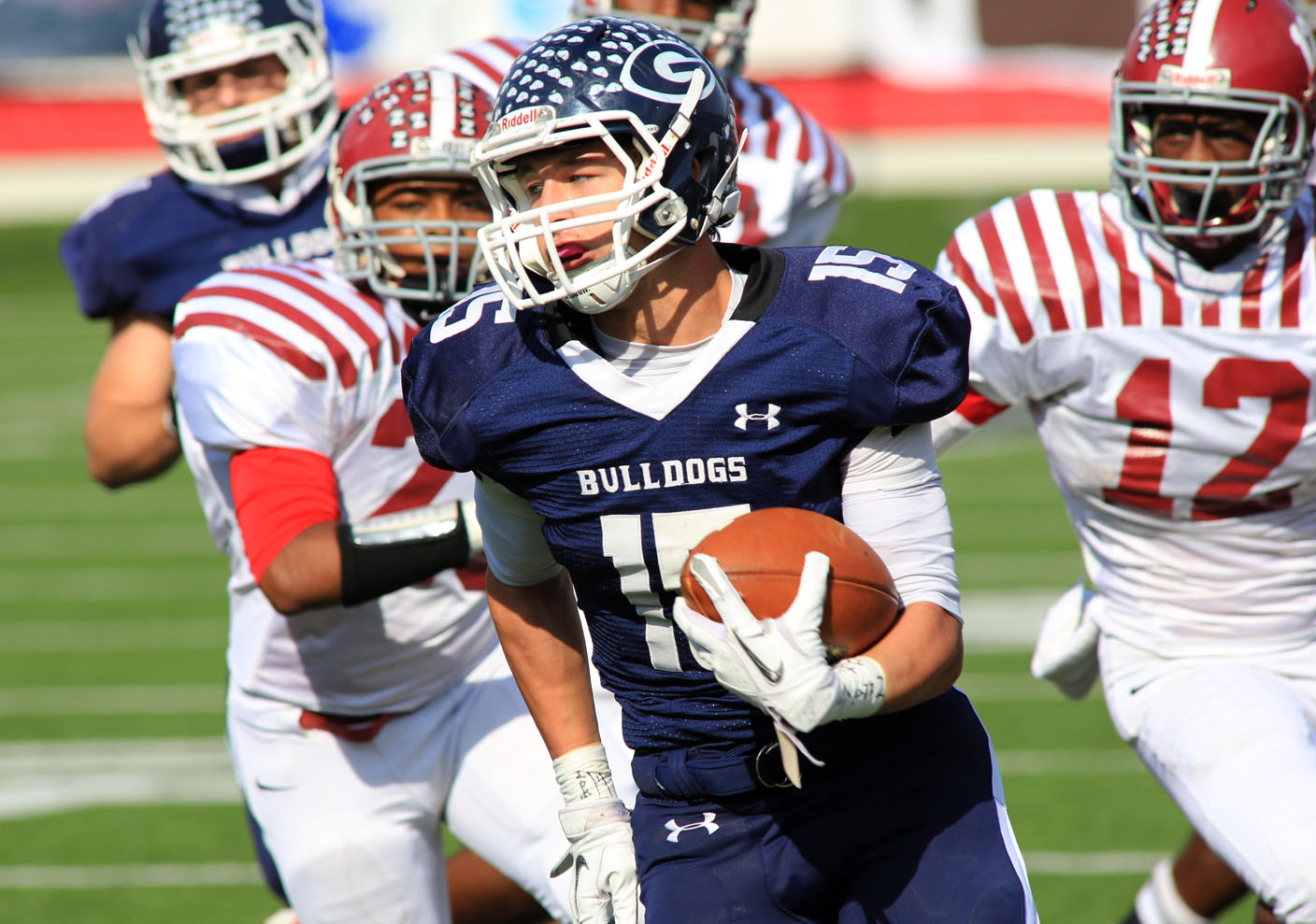 Arkansas Democrat-Gazette/STATON BREIDENTHAL --12/1/12-- Greenwood's Drew Morgan runs for a touchdown in the first quarter of the 6A state championship football game Saturday at War Memorial Stadium in Little Rock. 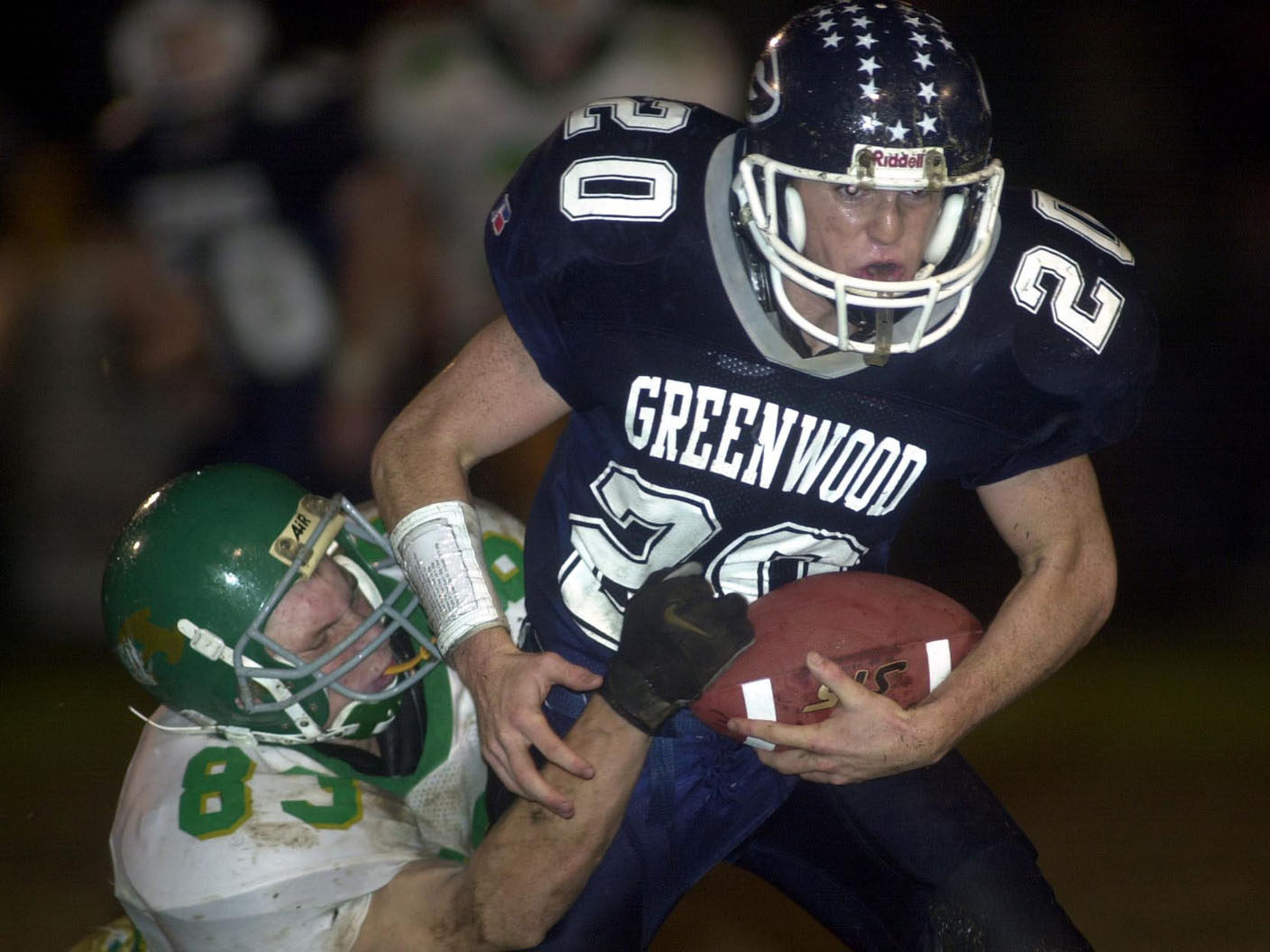 Arkansas Democrat-Gazette/MICHAEL WOODS Greenwood runningback Josh Bell (20) is pulled down by Alma defender Matt Sharp (83) in the first half of Friday nights game in Greenwood. 11/3/00 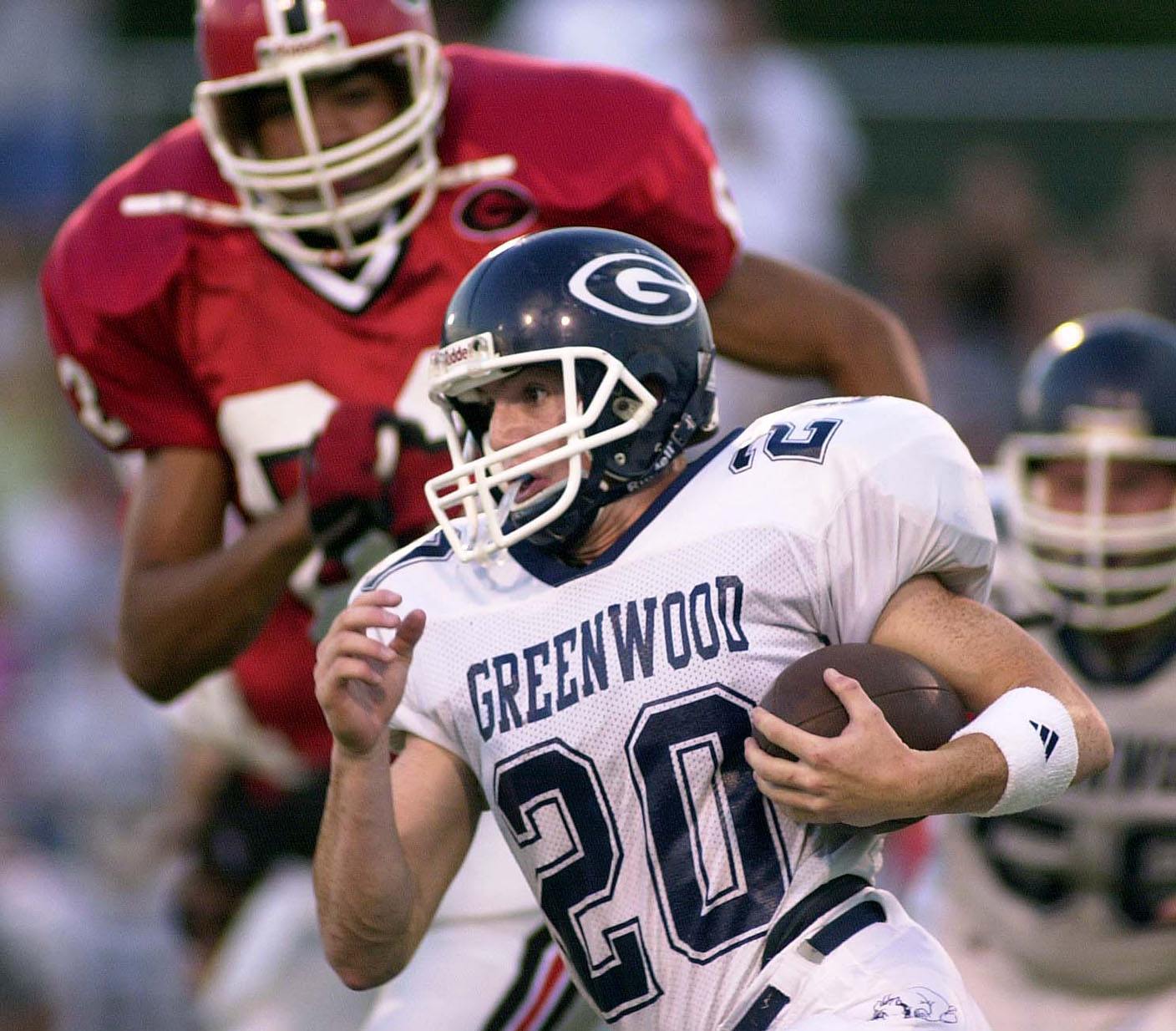 Arkansas Democrat-Gazette/MICHAEL WOODS The Greenwood Bulldogs Josh Bell breaks around the corner for a gain in Friday nights game against the Northside Grizzlies in Fort Smith. 9/1/00 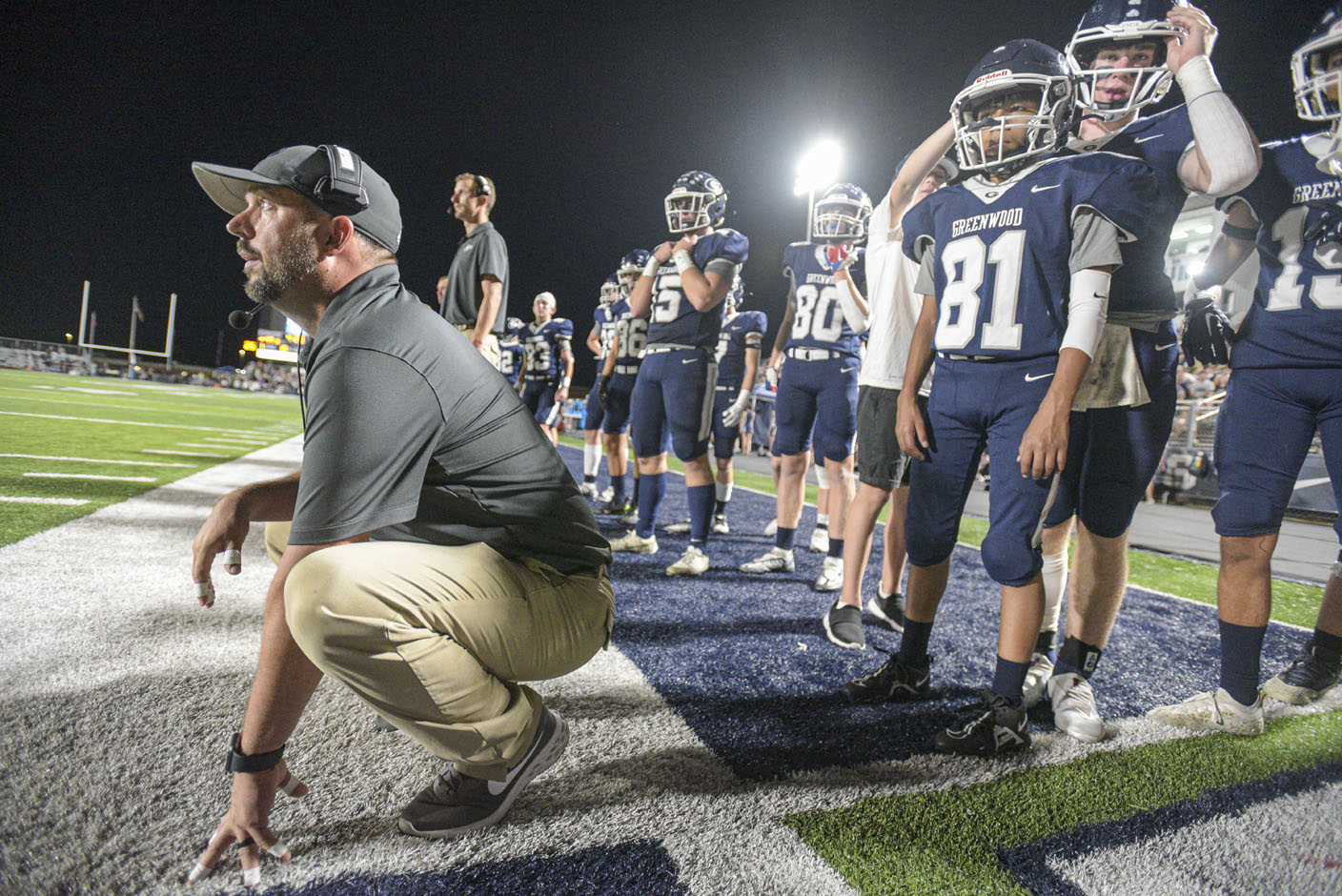 Leland Barclay was in the middle of the action as Greenwood won its 55th straight home game in a 33-23 triumph against Pulaski Academy.