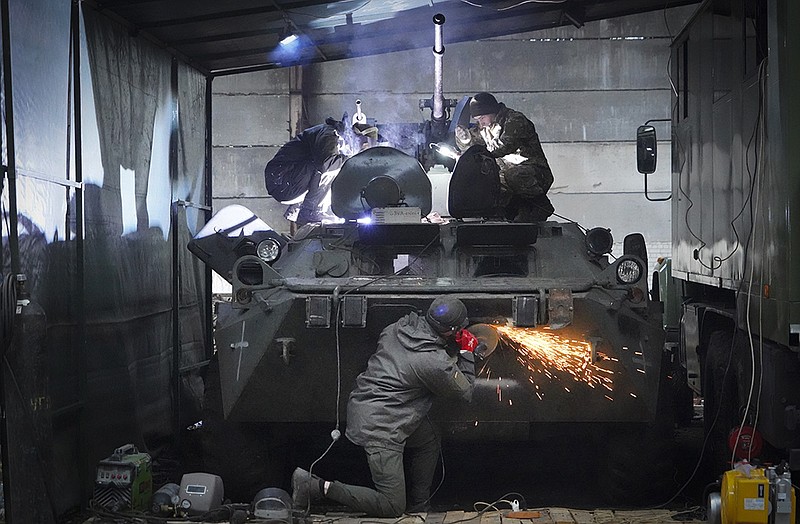 Ukrainian National Guard soldiers repair a captured Russian armored personnel carrier Thursday at a shop on the outskirts of Kharkiv in northern Ukraine. Officials said Thursday that 868 bodies of civilians, including 24 children, were found in liberated areas of the Kharkiv, Donetsk and Kherson regions. More photos at arkansasonline.com/ukrainemonth9/. (AP/Andrii Marienko)

Fighting in Ukraine has repeatedly damaged power lines and electrical substations that the Zaporizhzhia Nuclear Power Plant requires to operate its safety systems, forcing workers to turn to backup generators to cool its six reactors until regular power is restored. All six reactors have been shut down. The generators have enough fuel to maintain the plant in southeastern Ukraine for just 15 days, state nuclear power company Energoatom said.

"The countdown has begun," Energoatom said, noting it had limited possibilities to "maintain the ZNPP in a safe mode."

Rafael Grossi, the U.N. nuclear watchdog head, said relying on diesel generators "is clearly not a sustainable way to operate a major nuclear facility" and urged again that a protection zone be established around the plant.

Russia and Ukraine have traded blame during the war for shelling at and around the plant. Energoatom said Thursday that Russian shelling knocked out the last two high voltage transmission lines feeding the Zaporizhzhia plant. Russia gave a different account, blaming Ukraine.

The Russian state-run news agency Tass quoted an official at Russia's nuclear power operator, Rosenergoatom, as claiming that Ukraine had switched off the two power lines and denied that Russian shelling of power lines had caused the problems. He said the move deprived the city of Energodar, where plant's workers live, of heating.

Russian forces have occupied the plant since early in the war. It is located in the Zaporizhzhia region, one of four regions that Russia has illegally annexed. Although Russian President Vladimir Putin signed a decree transferring the nuclear plant to Russian ownership, Ukrainian workers continue to run the station.

Energoatom claimed Russian officials are trying to connect the power station to Russia's power grid so it could supply electricity to Crimea, which Russia annexed in 2014, and Ukraine's Donbas region, another area Putin annexed.

The human toll from earlier battles became evident again Thursday, when Ukrainian officials said 868 bodies of civilians, including 24 children, were found in liberated areas of the Kharkiv, Donetsk and Kherson regions. National police official Oleksii Serhieiev also told reporters 34 torture sites were found after Russian troops retreated from those areas, as well as the Kyiv, Sumy and Chernihiv regions.

Further east in the Donetsk region, battles continued for the towns of Bakhmut and Avdiivka, where authorities said the population was under constant shelling and living without electricity or heat. Six cities and villages in the region came under attack in the past day, while in the northeast, three Russian missiles hit Ukraine's second-largest city, Kharkiv.

Across the Dnieper River from the Zaporizhzhia power plant, the city of Nikopol was also shelled again, damaging residential buildings, a gas station and several businesses, Zelenskyy's office said Thursday.

In a rare hint of a possible retreat that Ukrainians treated with skepticism, a Moscow-appointed official in the occupied southern region of Kherson said Russian troops are "most likely" to move across the Dnieper River, away from the city of Kherson. Kirill Stremousov also told Russian state television that all Ukrainian attacks have been repelled.

Tens of thousands of civilians have been evacuated from the city of Kherson in the face of a Ukrainian counteroffensive. Russian authorities removed their country's flag Thursday from the Kherson administration building, a week after the regional government moved out.

Ukraine's southern military spokeswoman, Natalia Humeniuk, said the flag's removal may be a provocation "and we should not hurry to rejoice." She also told Ukrainian television some Russian military personnel are disguising themselves as civilians.

Neither side's claims could be independently verified.

On the humanitarian front, seven ships carrying 290,000 tons of agricultural products sailed from Ukrainian seaports for Asia and Europe, a day after Russia resumed its participation in a program allowing the export of Ukrainian grain. Putin said Moscow had received assurances that Ukraine wouldn't use the humanitarian corridors to attack Russian forces.

Ukrainian Foreign Ministry spokesman Oleh Nikolenko denied that Kyiv had made any new commitments or had used the grain corridor for military purposes.

Kremlin spokesman Dmitry Peskov cautioned that Russia's decision did not mean the grain deal would be extended after it expires Nov. 19.

Russia had suspended its participation in the deal last weekend, citing an alleged Ukrainian drone attack against its Black Sea Fleet in Crimea. Ukraine said the Russians mishandled their own weapons.

In Moscow, the Russian Foreign Ministry summoned British Ambassador Deborah Bronnert to protest what it alleged was British instructors' help in the Saturday attack by drones on the Black Sea Fleet in Sevastopol. Bronnert made no comment after the meeting.

Under the grain deal, Russia was allowed to resume fertilizer and grain exports, but Russian Foreign Minister Sergey Lavrov said Thursday that he hadn't seen progress on that.

Since the deal was reached in July, 430 ships have exported 10 million tons of Ukrainian agricultural products to Africa, Asia and Europe. Ukraine's infrastructure ministry said export volumes in October "could have been 30%-40% higher if Russia had not artificially blocked inspections."

U.N. Secretary-General Antonio Guterres hailed the 10 million-ton milestone and appealed to all parties to renew the grain agreement.

Elsewhere, a Ukrainian military official said Russia is using Belarusian territory to launch drone strikes. Oleksii Hromov said Iranian drones are flying into Ukraine from a military base in the Belarusian city of Luninets, 62 miles north of the border.

The U.N. nuclear agency, meanwhile, said Thursday that its inspections have found no evidence to support Russia's unfounded claims that Ukraine is planning to set off radioactive "dirty bombs" after examining three locations in Ukraine. Western nations have called Moscow's claims "transparently false."

Zelenskyy, in his nightly address, said the inspectors showed "we have clear and irrefutable evidence that no one in Ukraine has created or is creating any 'dirty bombs.' And the only thing that is dirty in our region now is the heads of those in Moscow."

A majority of Bulgaria's lawmakers on Thursday approved sending the country's first military aid to Ukraine.

The National Assembly voted 175-49 with one abstention in favor of a proposal submitted by four pro-European Union parties. The government has now one month to decide what kind of weapons Bulgaria can provide without affecting its own defense capabilities.

Bulgaria previously agreed to repair Ukrainian military equipment at its factories but refused to send weapons directly due to opposition from President Rumen Radev and the country's Moscow-friendly political parties.

Along with Hungary, Bulgaria was the only EU member country that had declined to give Ukraine weapons as it fights Russia's invasion and war.

The heated debate that preceded the vote reflected the divisions in Bulgaria since Russia invaded its neighbor.

Even though the country belongs to both NATO and the EU, many Bulgarians harbor strong sympathies for Russia that are rooted in a history, culture and religion. Bulgaria also relies heavily on Russian energy supplies.

The pro-Russian nationalist Vazrazhdane Party called on its supporters to gather in front of the parliament building to protest the military aid for Ukraine, saying the aid "pushes the country into war."

Information for this article will be contributed by Hanna Arhirova, Edith M. Lederer, Frank Jordans and staff writers of The Associated Press. 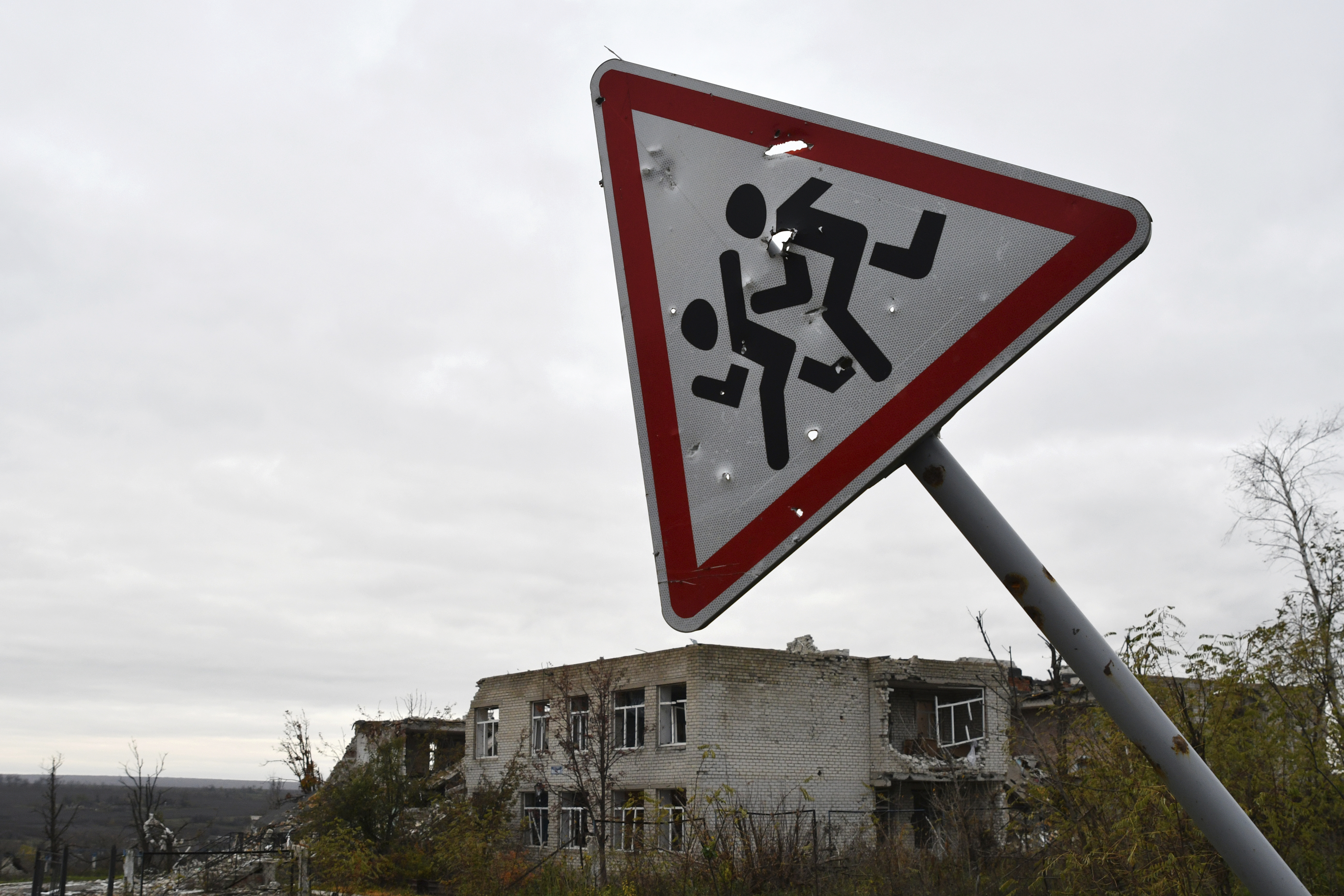 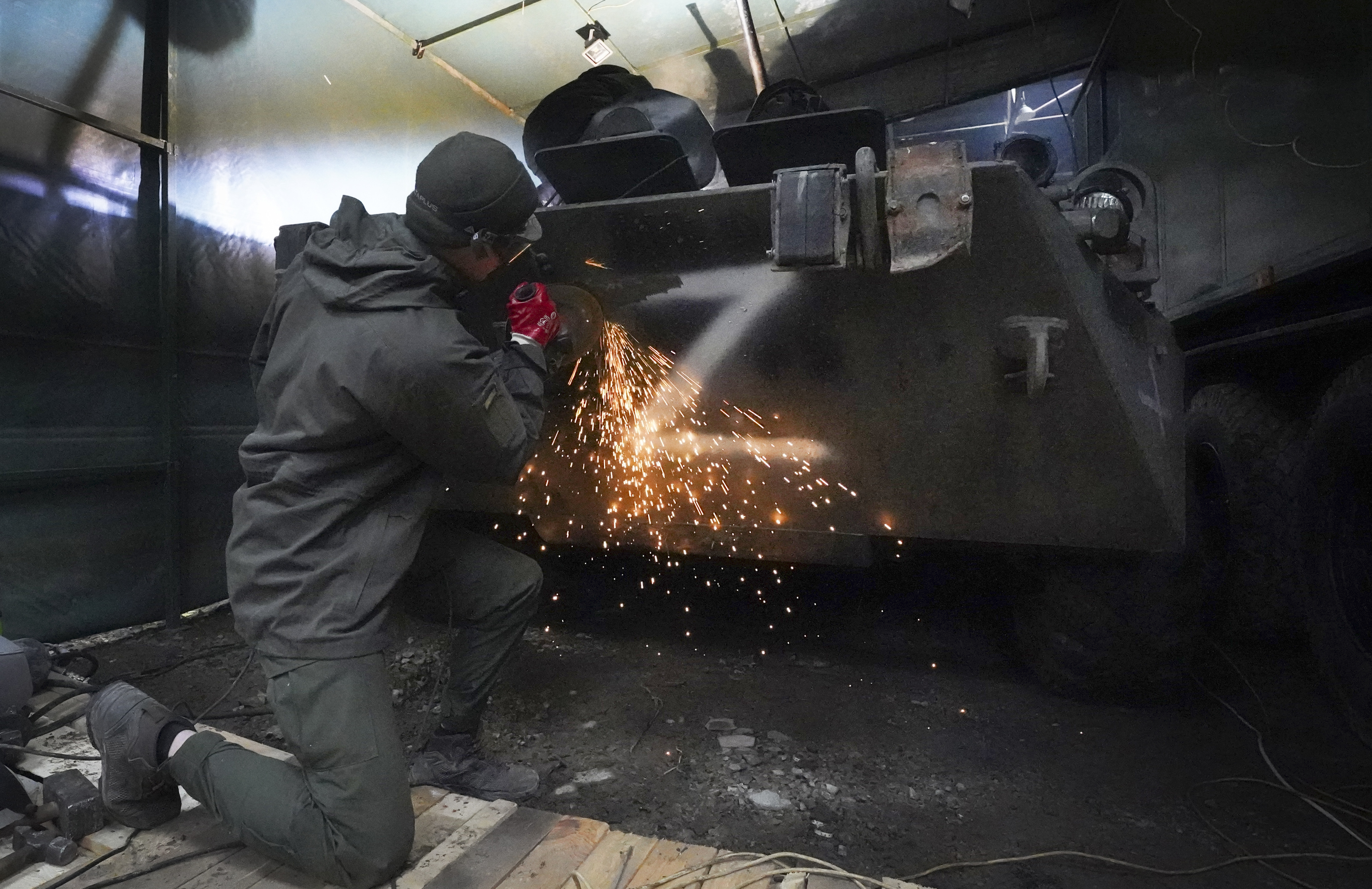 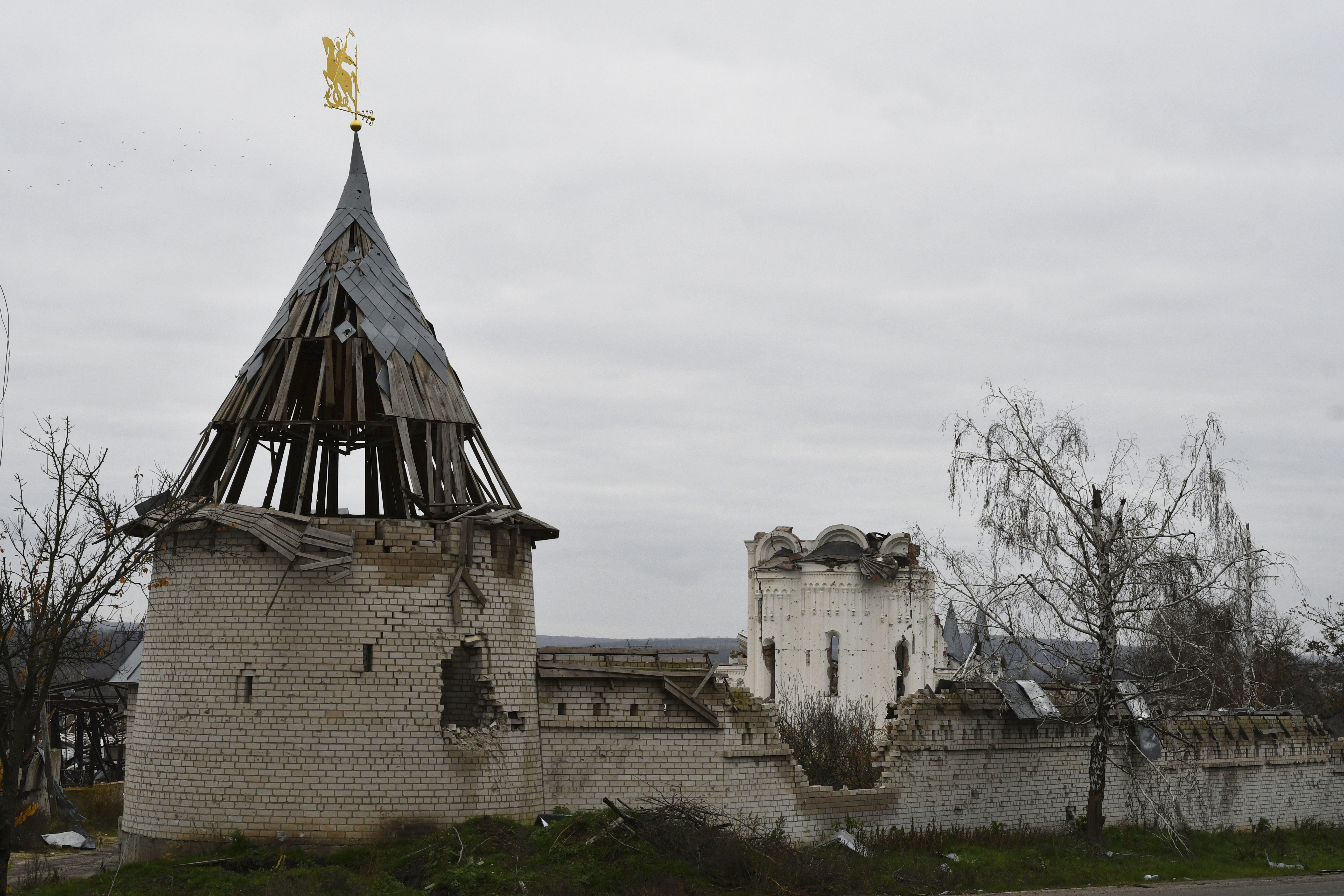 A view of the St. George's Skete, damaged by fighting, in the village of Dolyna, Donetsk region, Ukraine, Thursday, Nov. 3, 2022. (AP Photo/Andriy Andriyenko) 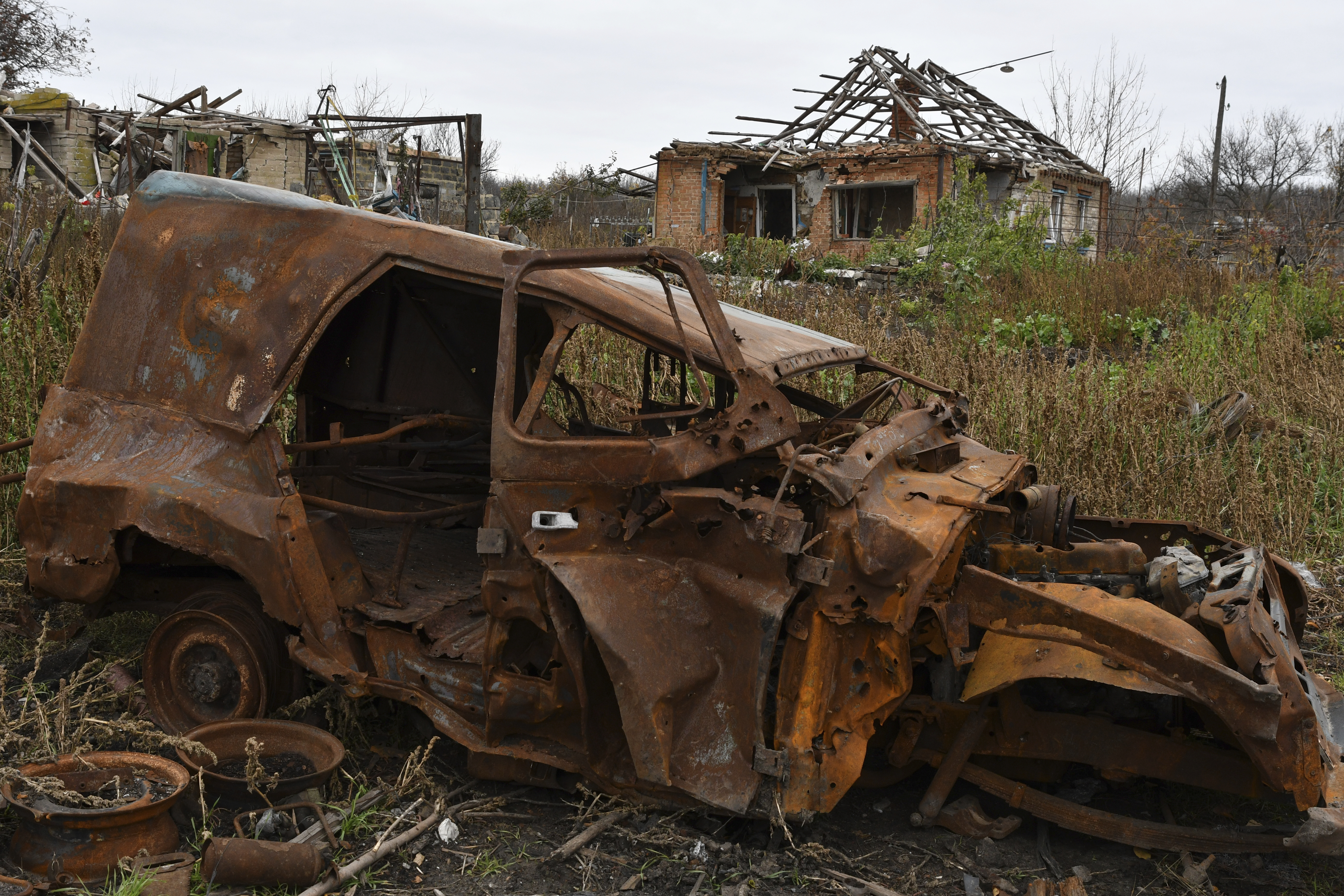 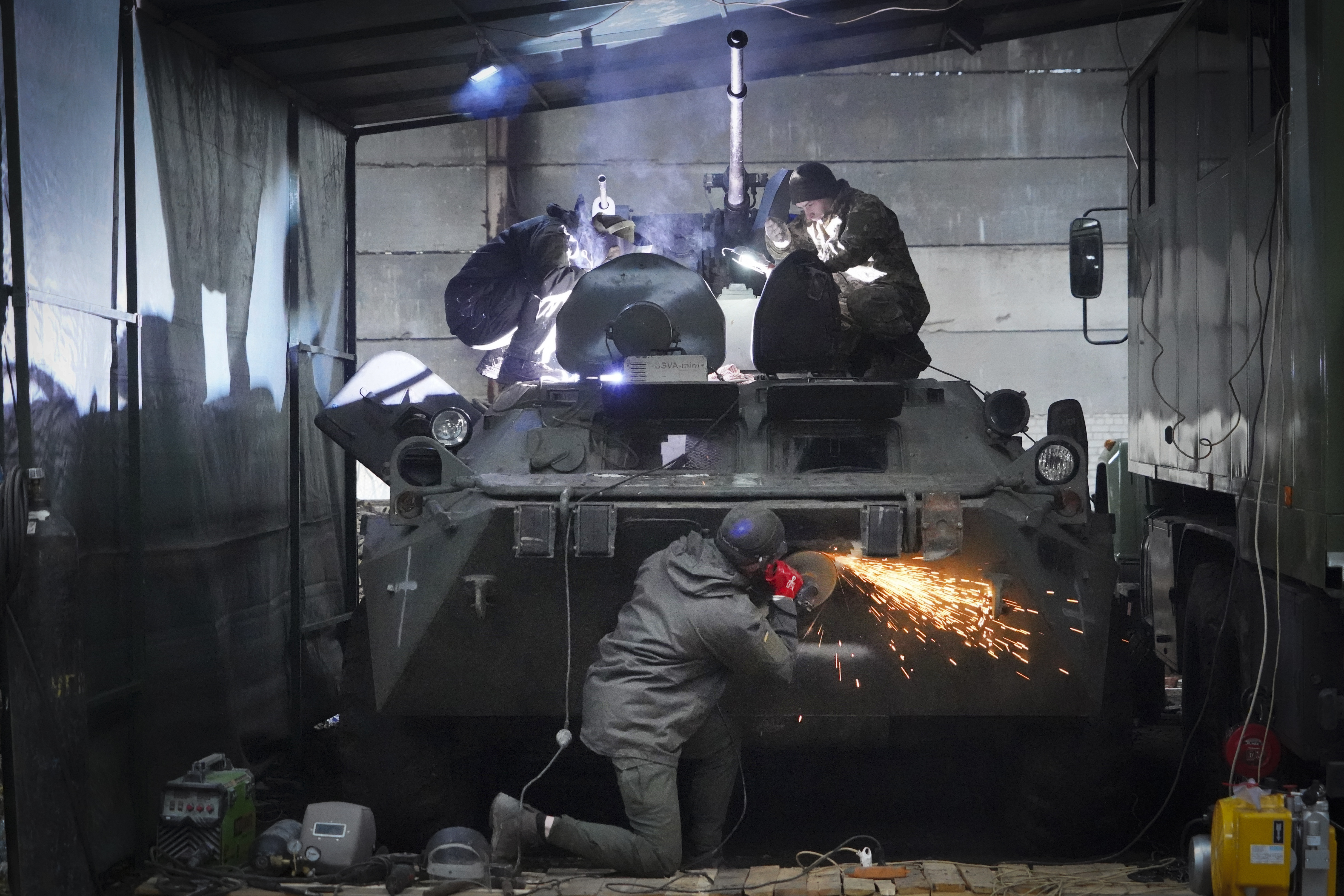 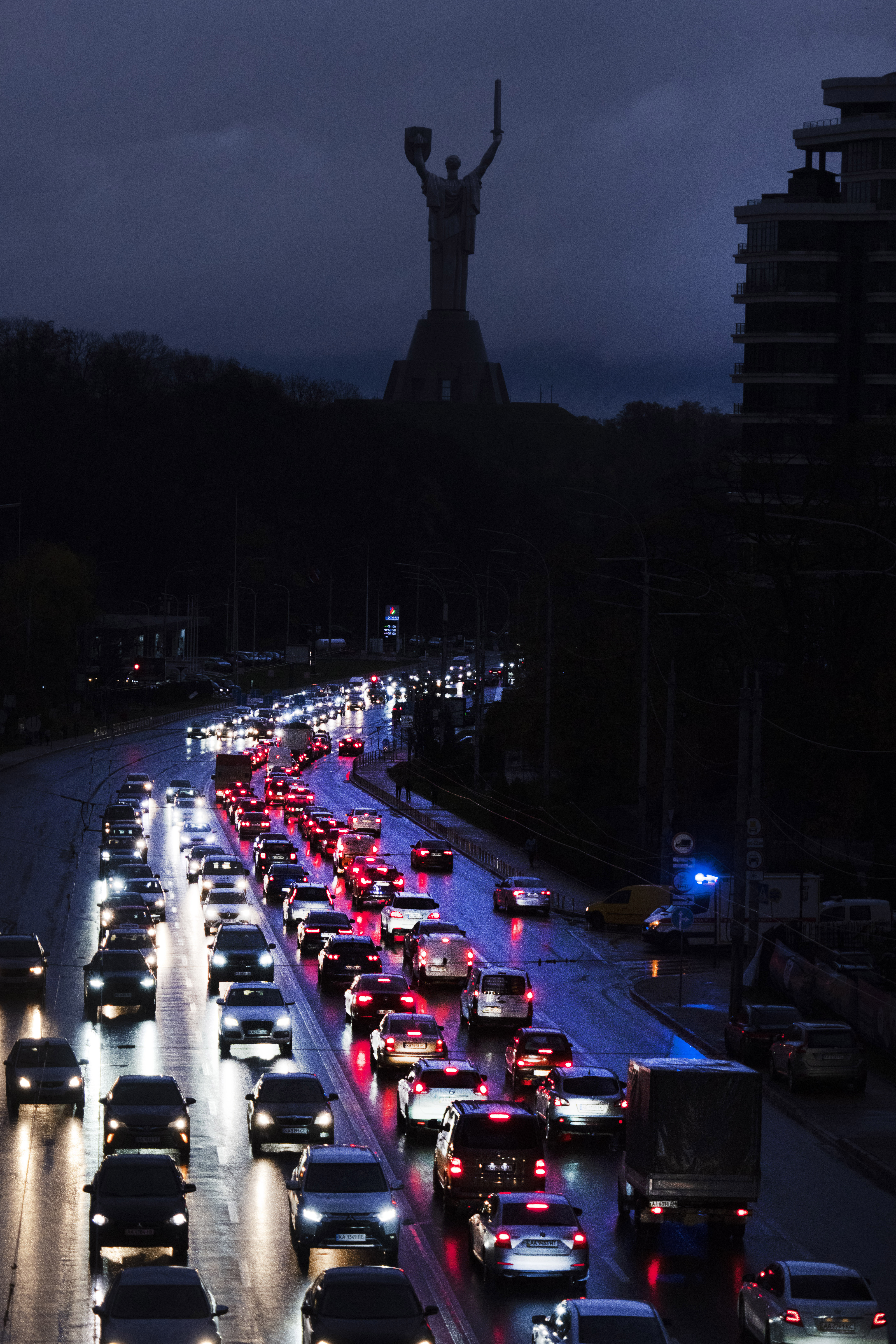 Cars travel in the dark, with the Motherland Monument in the background, in central Kyiv, Ukraine, Thursday, Nov. 3, 2022. Rolling blackouts because of Russia's rocket attacks are increasing across Ukraine as the government rushes to stabilize the energy grid and repair the system ahead of winter. (AP Photo/Efrem Lukatsky) 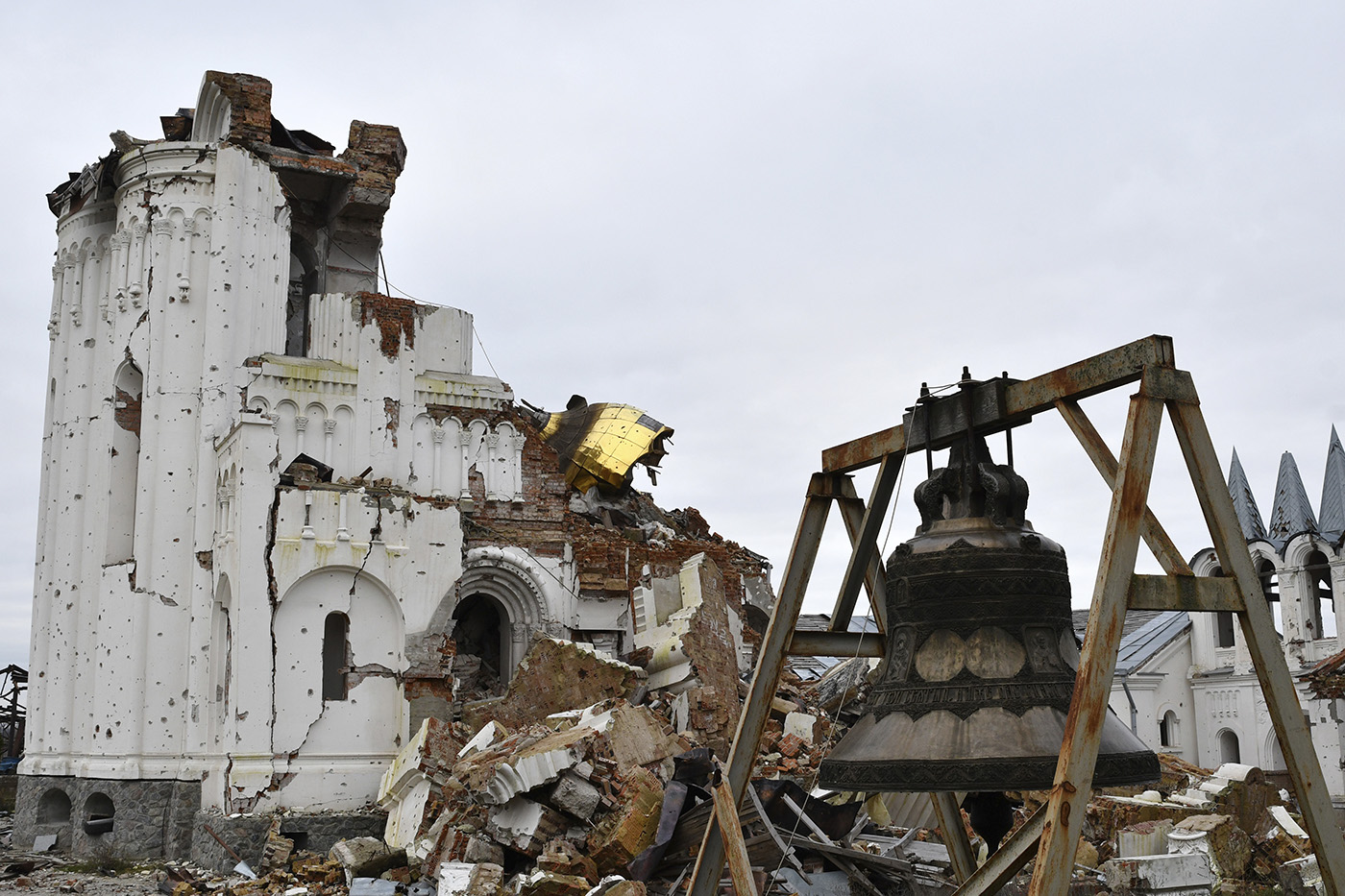 St. George’s Skete church shows damage from past fighting Thursday in the village of Dolyna in the Donetsk region of eastern Ukraine. (AP/Andriy Andriyenko)