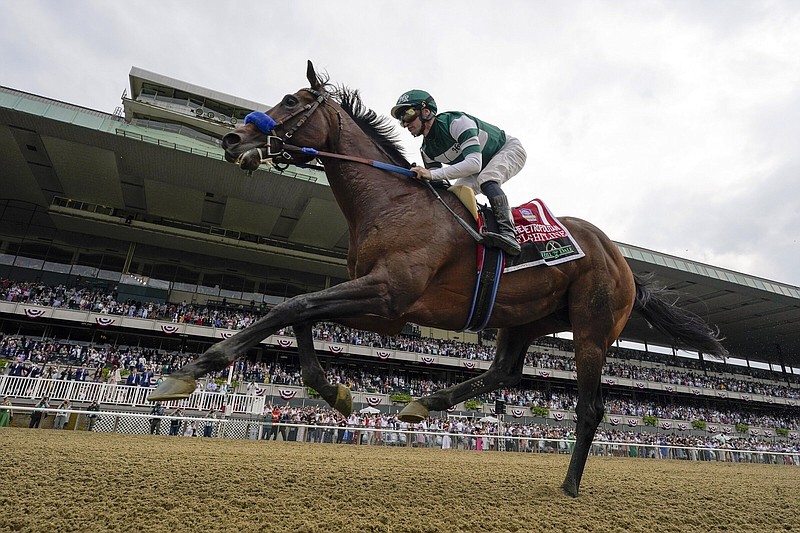 Flightline, shown with Flavien Prat aboard winning The Hill ‘N’ Dale Metropolitan in June at Belmont Park in Elmont, N.Y., enters today’s Breeders’ Cup Classic at Keeneland as the 3-5 favorite. Flightline, a 4-year-old bay colt, has yet to lose in five starts. (AP/Seth Wenig)

LEXINGTON, Ky. -- Comparisons of Flightline to legendary Triple Crown champion Secretariat may initially sound like a stretch, though they offer a hint about his dominance.

The 4-year-old bay colt has yet to lose in five starts, and four of his wins have been by double-digit lengths. All told, Flightline has won by a whopping 63 lengths combined, including a 19 1/4-length romp in the Grade I Pacific Classic Stakes at Del Mar on Sept. 3.

No wonder he enters today's $6 million Breeders' Cup Classic at Keeneland as the 3-5 favorite, which speaks volumes considering the impressive group of contenders vying for Horse of the Year honors. Flightline drew the No. 4 post position among eight horses for the 1 1/4-mile race on dirt. But given his stellar resume, trainer John Sadler is confident about any place his pupil runs from, at any distance.

"The mile and a quarter, that was the question before the Pacific Classic and he answered that," Sadler said. "There's not much more I can say."

The eight-horse Grade I Classic is the marquee event among nine second-day stakes races at Keeneland. The picturesque track in the heart of horse country is hosting the season-ending championships for the second time in three years and will feature full grandstands after the 2020 running went off without spectators because of the coronavirus pandemic.

Preceding the Classic is the $4 million Breeders' Cup Turf with nine foreign-trained horses among 13 entrants. Nations Pride is the 7-2 choice and leads seven Irish horses, with Master Piece (China) and Nautilus (Brazil) also in the field.

Most of the attention will be on the Classic and which horse could potentially derail Flightline's bid for his biggest victory.

Epicenter (5-1, No. 6 post) and Life Is Good (6-1, No. 2) are the next two choices, for good reasons. Taiba is an 8-1 choice starting from the rail for embattled Hall of Fame trainer Bob Baffert, who's back in Kentucky for the first time since serving a 90-day suspension this spring by Kentucky racing stewards for a postrace positive drug test by Medina Spirit in the 2021 Kentucky Derby. Baffert is seeking a record fifth victory in the Classic.

Steve Asmussen-trained colt Epicenter has four wins and three seconds as a 3-year-old and seemed headed toward a Kentucky Derby win this spring until 80-1 long shot Rich Strike (20-1, No. 8 in the Classic) stormed out of nowhere down the stretch. Epicenter won both the Travers Stakes and Grade II Jim Dandy at Saratoga this summer by a combined 6 3/4 lengths.

Todd Pletcher is just as confident about Life Is Good, who brings in a three-race winning streak by a combined 8 1/4 lengths. He'll start to the immediate left of stablemate Happy Saver (30-1), who seeks his first win as a 5-year-old.

Meanwhile, Baffert has been heartened by the reception he has received in the Bluegrass State. His simple hope is that Taiba can duplicate Medina Spirit's runner-up Classic finish last year at Del Mar.

"He's one of these that you've got to stay after him," Baffert said of Taiba. "But he's doing really well. He looks exceptionally well and I think he's going to get better as he gets older."

Forte served notice as an early Kentucky Derby favorite, rallying from mid-pack to overtake Cave Rock and win the $2 million Breeders' Cup Juvenile by 1 1/2 lengths on Friday at Keeneland. His fourth victory in five starts comes just over a month after he won the Breeders' Futurity at the track by a neck.

Trainer Todd Pletcher's colt went off as a 4-1 choice in the 1 1/16-mile race but had work to do running in the middle on the backstretch. Forte quickly made his charge through the 10-horse field and got off the rail to close in on Bob Baffert-trained Cave Rock and the leaders by the final turn.

"The last time, he made the lead pretty comfortably," Pletcher said of Forte. "But he got to waiting and laying on the horse next to him, so today, if we were lucky enough to get in a position to get [the lead], we wanted to give ourselves plenty of space and not get close to the horse next to him."

Forte turned it on entering the stretch, racing past Cave Rock at the eighth pole to claim his third consecutive victory as a 2-year-old, perhaps solidifying his credentials for Horse of the Year honors. Mike Repole, whose stable co-owns the horse with Florida Panthers owner Vincent Viola, was giddy over his good fortune, just five months after he won the Belmont Stakes with Mo Donegal.

"My whole family thinks you just show up and you win a Grade I [race] and that that's normal," he said. "I'm not fooled about how blessed I am that this is happening."

In other Breeders' Cup races Friday, Wonder Wheel surged past Leave No Trace in the final furlong for a three-length victory in the $2 million Juvenile Fillies. It was her fourth win in five starts with a second and likely sealed her claim as the top 2-year-old female. American Rockette, who is owned by Arkansan Frank Fletcher, was a late scratch. ... Mischief Magic came on late to earn a one-length victory over Dramatised in the $1 million Turf Sprint. Tylers Tribe, owned by Timothy E. Martin of Royal, finished 12th. ... Victoria Road nosed past Silver Knott to win the $1 million Juvenile Turf. It looked like a dead heat at the wire before a photo finish showed the Irish-bred colt eking out his fourth consecutive victory with a head bob. ... Meditate won the $1 million Juvenile Fillies Turf, beating Pleasant Passage by 2 1/2 lengths. 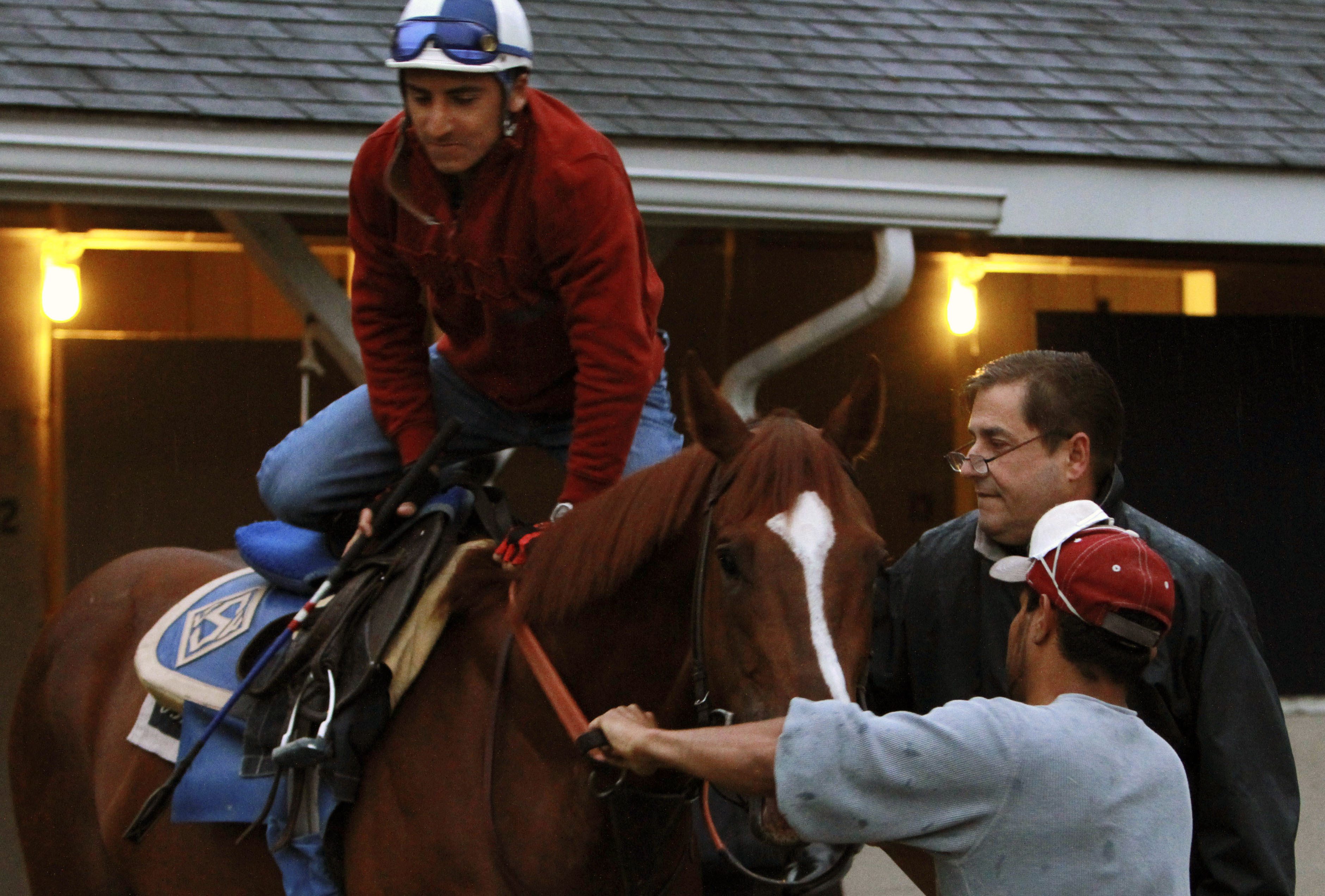 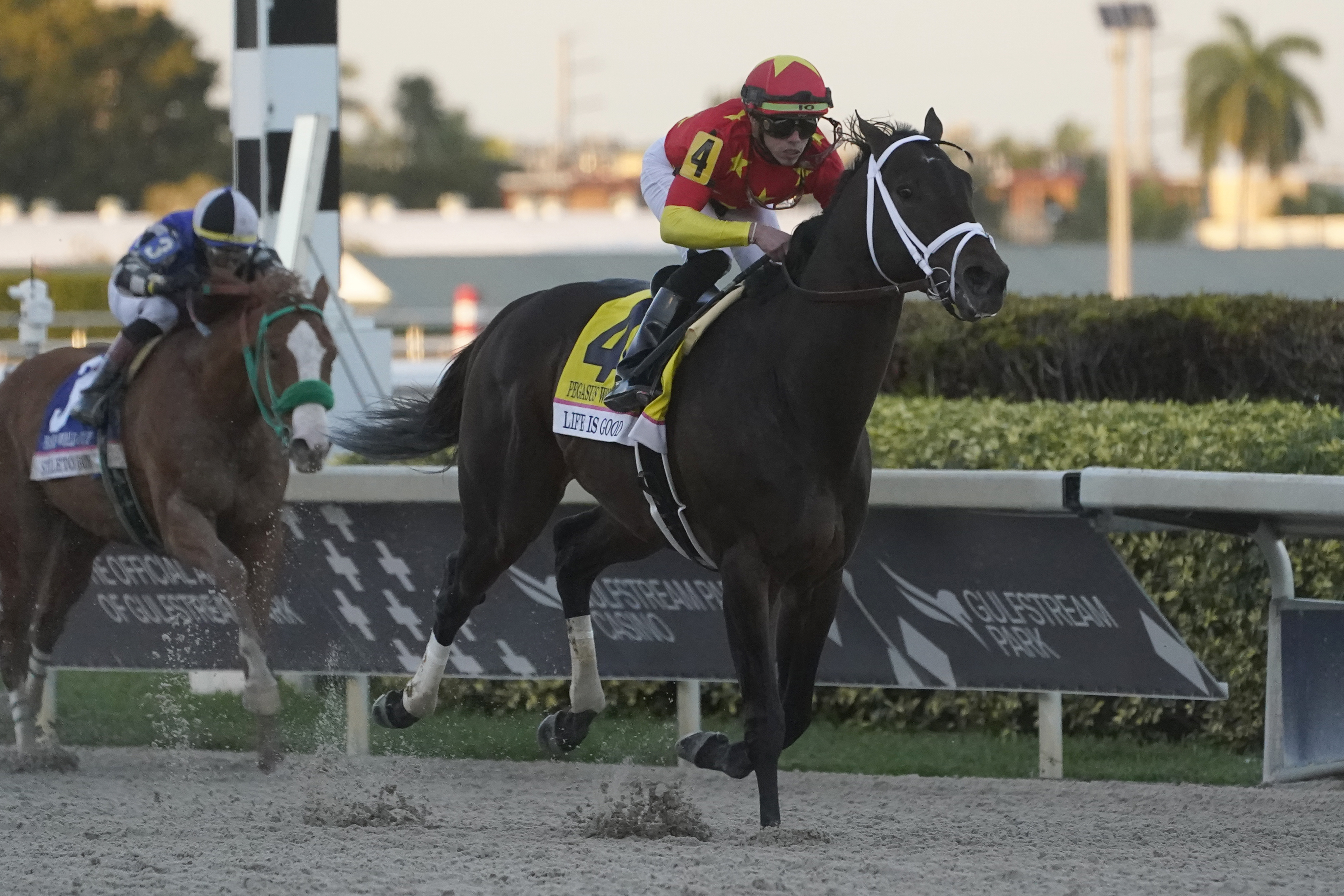 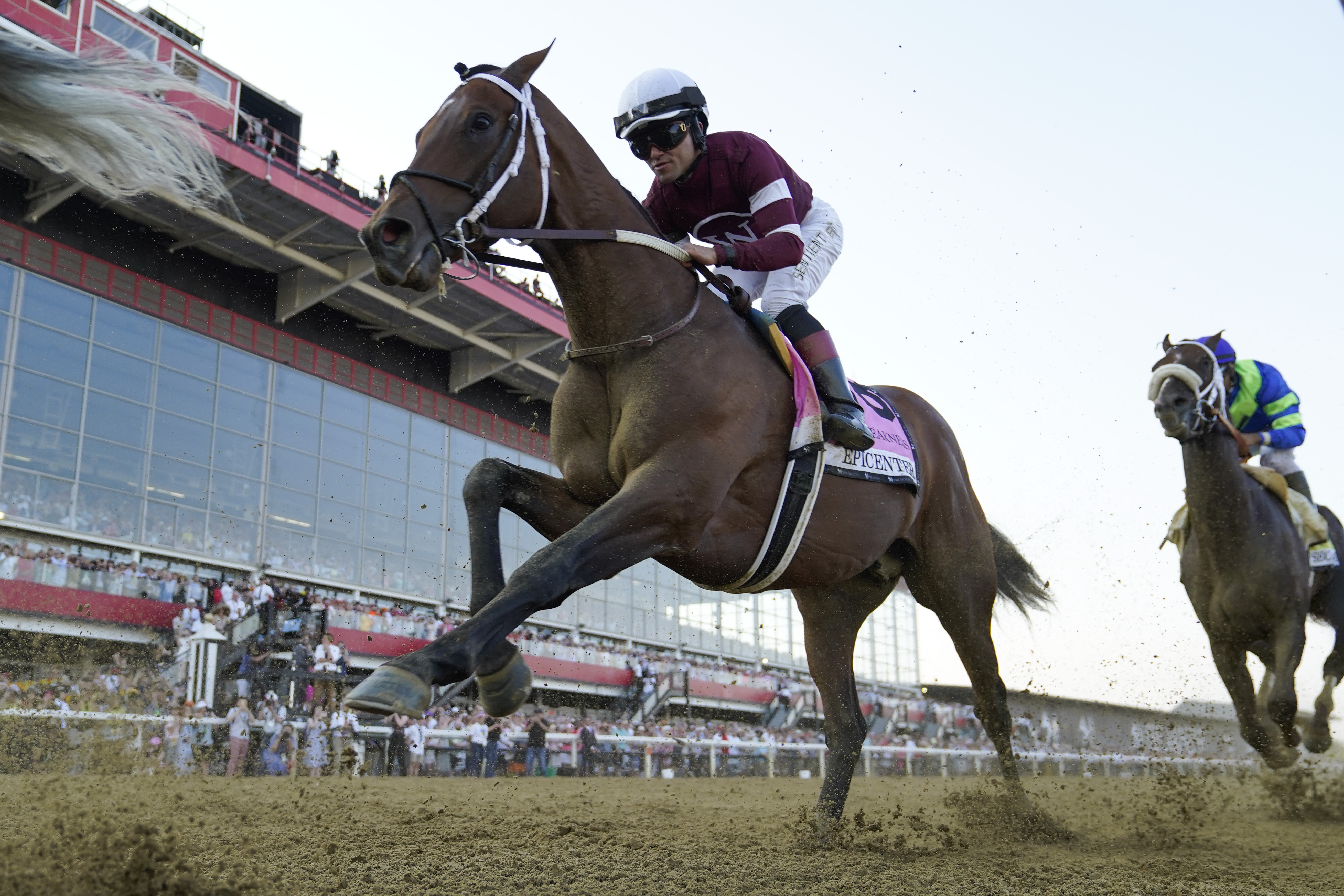 FILE - Joel Rosario atop Epicenter participates in the 147th running of the Preakness Stakes horse race at Pimlico Race Course, May 21, 2022, in Baltimore. Unbeaten Flightline is the 3-5 favorite for the Breeders’ Cup Classic at Keeneland, Saturday, Nov. 5, 2022. Epicenter is the 5-1 second choice, with Life Is Good the 6-1 third choice. (AP Photo/Julio Cortez, File) 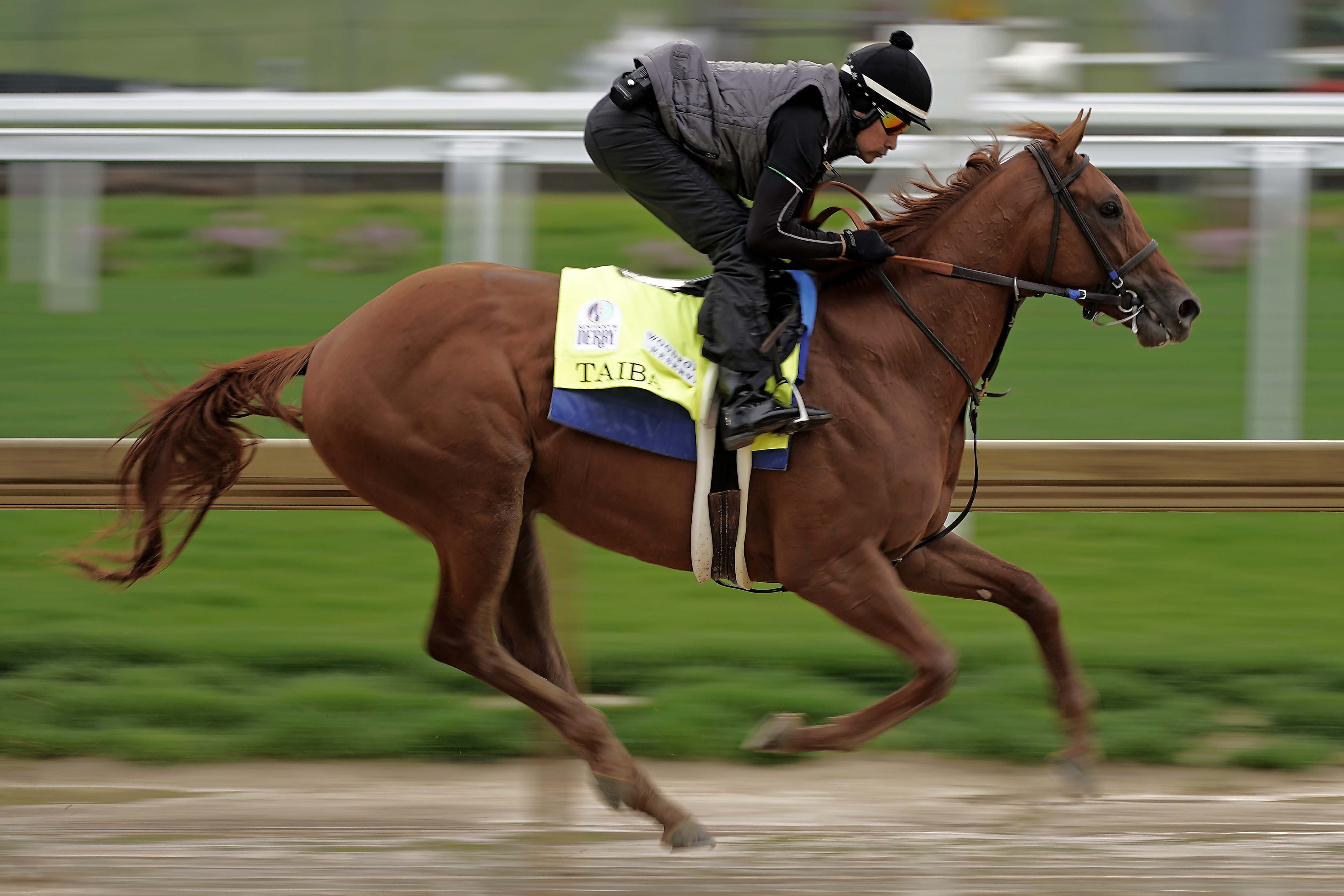 FILE - Kentucky Derby entrant Taiba works out at Churchill Downs, May 3, 2022, in Louisville, Ky. Taiba is the 8-1 choice in the Breeders' Cup Classic horse race Saturday, Nov. 5, 2022, for embattled Hall of Fame trainer Bob Baffert, who makes his Kentucky return after serving a suspension this spring. (AP Photo/Charlie Riedel, File) 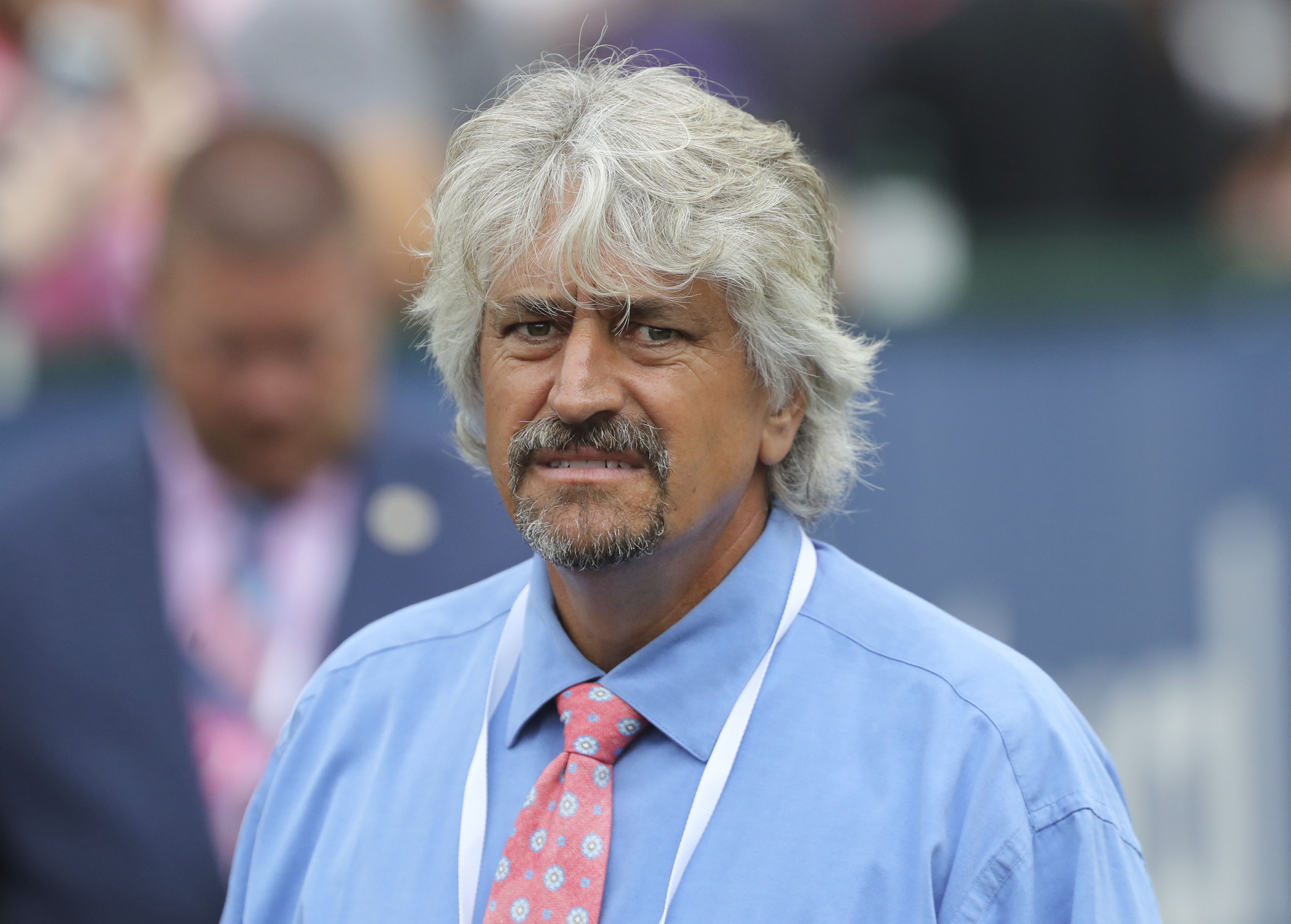 FILE - Trainer Steve Asmussen looks on at Churchill Downs, May 3, 2019, in Louisville, Ky. Taiba is the 8-1 choice in the Breeders' Cup Classic horse race Saturday, Nov. 5, 2022, for embattled Hall of Fame trainer Bob Baffert, who makes his Kentucky return after serving a suspension this spring. Asmussen hopes Epicenter provides his third Classic win, while Todd Pletcher looks for his second with Life Is Good. (AP Photo/Gregory Payan, File) 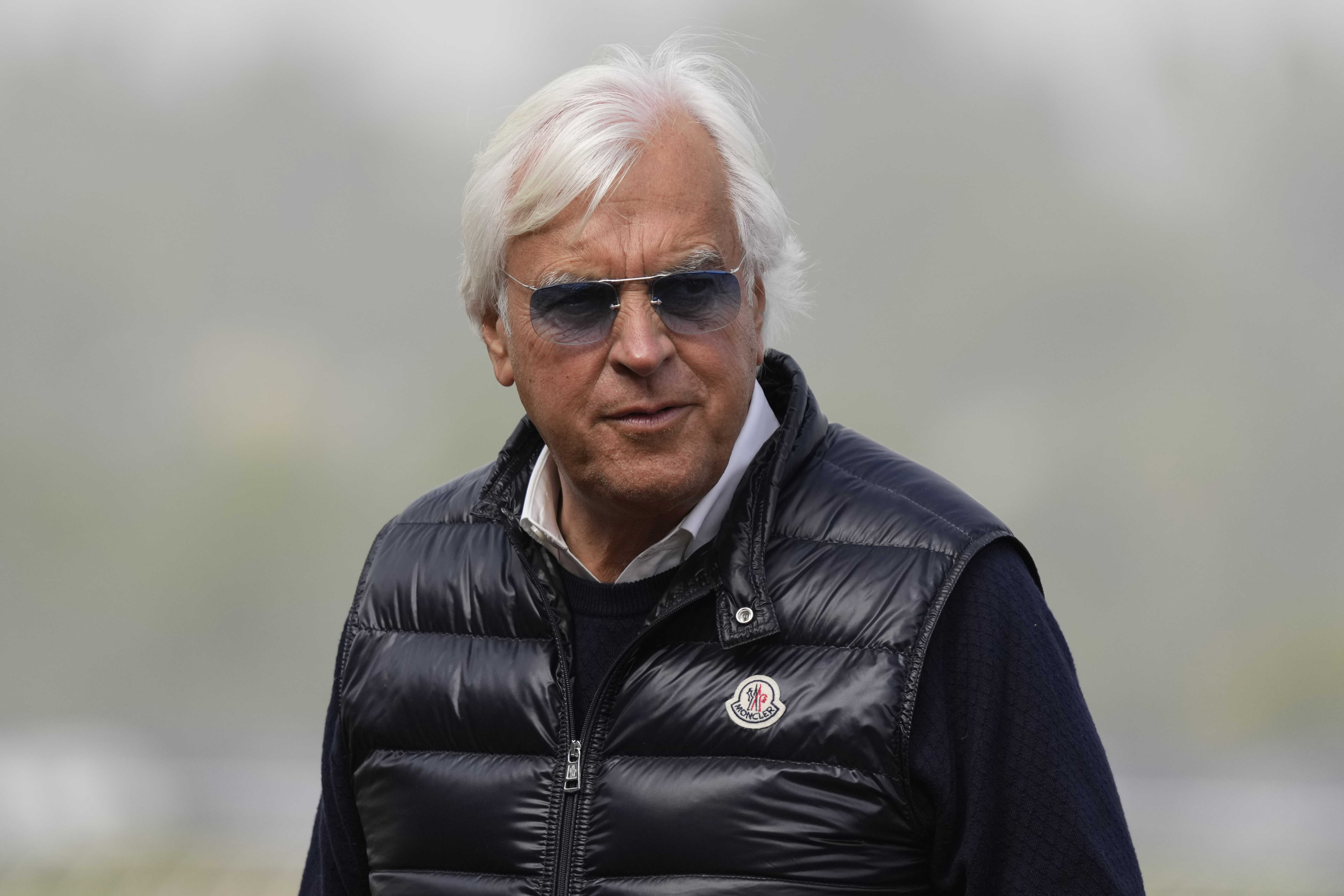 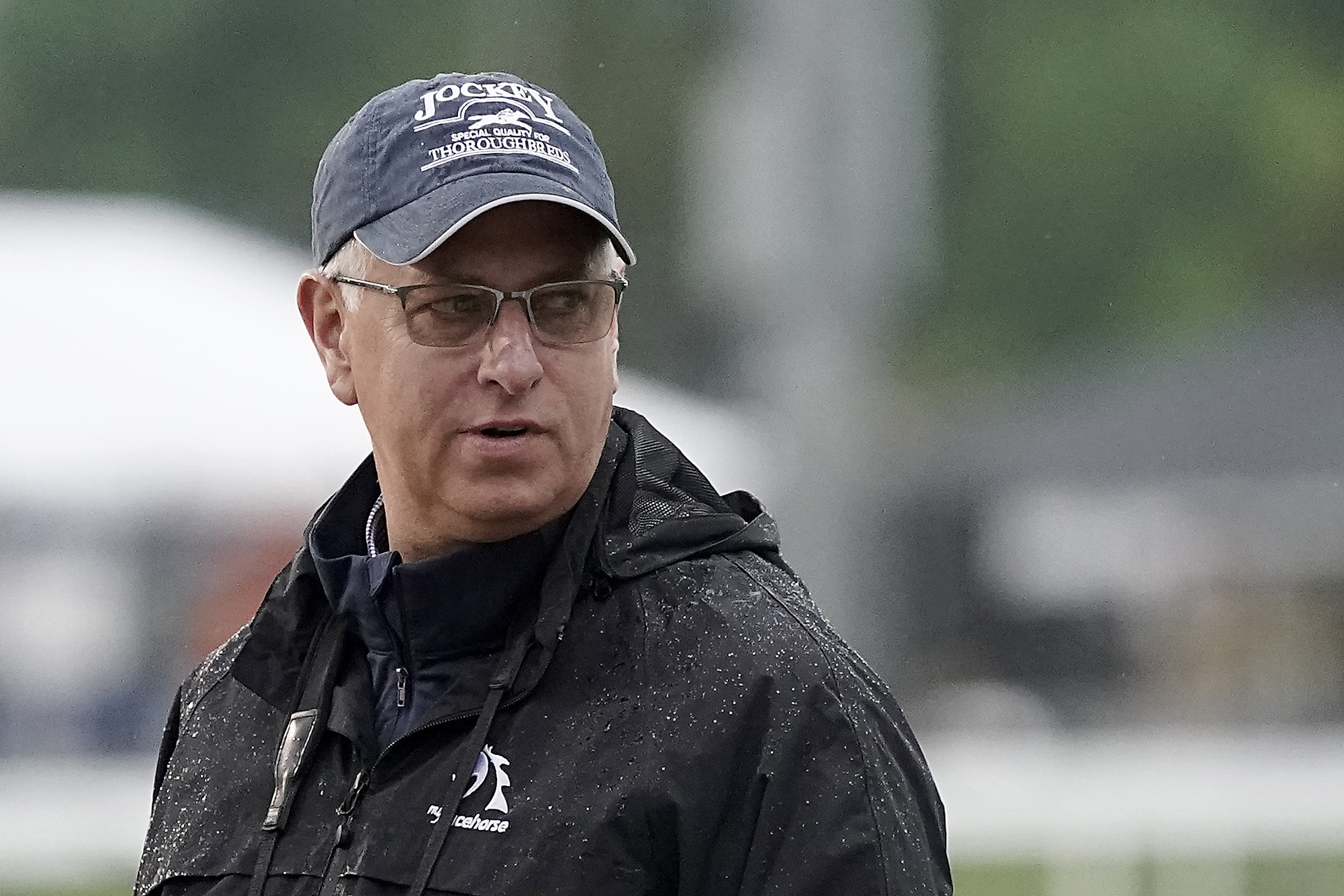 Print Headline: Flightline’s run of dominance to be tested in today’s Classic