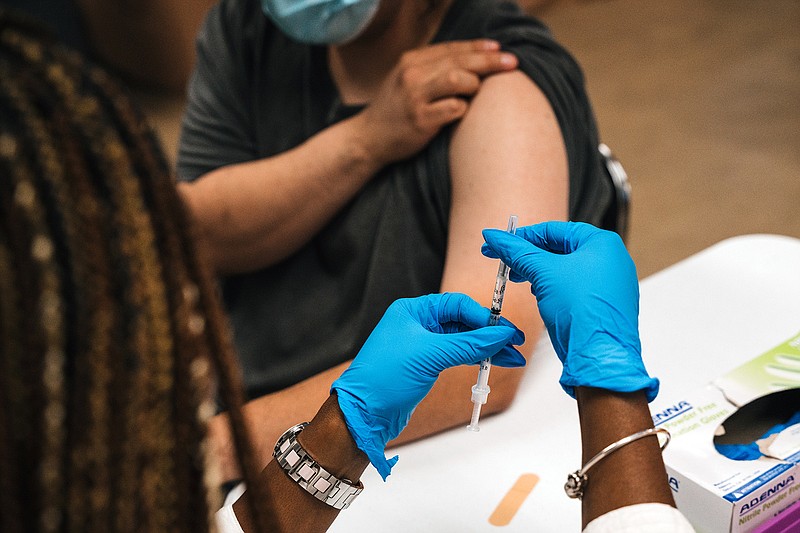 A nurse prepares a covid-19 booster shot in September at a vaccination site in Maywood, Ill. The updated vaccine is far more effective than earlier versions for people 55 and older, according to Pfizer and BioNTech research. (The New York Times/Jamie Kelter Davis)

WASHINGTON -- A new study by Pfizer and BioNTech suggests that their updated coronavirus booster released in September is nearly four times as good as its predecessor at boosting antibodies against the currently dominant version of the virus for people older than 55.

Federal officials are hoping that the encouraging results will bolster what has so far been a dismal public response to the retooled shots. Only about 8% of Americans ages 5 and up have received the new boosters from Pfizer and Moderna, which are recommended for people in that age group who have had an initial round of vaccination.

Meanwhile, the United States continues to experience an unusually high and early uptick in flu and respiratory syncytial virus infections, straining a health care system trying to recover from the worst of the coronavirus pandemic.

Pfizer and BioNTech announced the study results in a news release. The companies said that one month after getting the new booster, clinical trial participants older than 55 had antibody levels that were 3.8 times as high as those who received the original booster. The number of participants in the study was small, with 36 people receiving the new booster and 40 receiving the old one.

The control group included only older adults, and the findings so far are limited to one month after the shot. Results from a similar clinical trial by Moderna are expected soon.

Biden administration officials cast the results as good news in the battle against covid-19, but whether many Americans will care much remains to be seen. As the pandemic nears the three-year mark, the public seems deeply weary of covid vaccinations.

In a Kaiser Family Foundation poll conducted in September, 1 in 5 adults said they had not even heard about the new boosters.

"Folks have just tuned out," said Michael Fraser, the chief executive of the Association of State and Territorial Health Officials. "Which is totally unfortunate and not the place where you want to be."

Administration officials said the results of the study offered a new reason for Americans to seek out the updated shots before what experts fear could be a winter surge of the virus that leads to tens of thousands of unnecessary deaths.

"You can see the train coming down the tracks," said Dr. Peter Marks, the top vaccine regulator for the Food and Drug Administration. "The time to get off the tracks is now, not when you can smell the oil from the train engine."

Pfizer said study participants in the control group had been boosted about six months earlier, while those who received the updated shot had had their last booster 11 months earlier. Both groups had similar antibody levels before receiving the new booster.

The updated shot targets the version of the virus that now looms largest in the United States, a subvariant of omicron known as BA.5. But by next month, a new omicron subvariant is expected to become dominant.

Administration officials say those subvariants are structurally alike enough that the updated shots should continue to provide potent protection. Marks said he expected some decrease in the boosters' ability to neutralize the virus but their overall benefits to hold.

While urging Americans to get the updated shots, Biden administration officials are not casting them as a final answer to the pandemic.

For two years, the administration has been engaged in a continual game of catch-up. By the time scientists have revised the vaccine to protect against the virus' newest incarnation, it has already shifted to another form.

That reality, some experts said, could be part of the reason Americans are showing diminished enthusiasm for each added shot. So far, the administration has not persuaded Congress to allot more money to develop the next generation of vaccines that could end the behind-the-curve cycle.

Asked whether positive clinical trial results would help pique interest in the boosters, Dr. Philip Huang, the health director for Dallas County, Texas, said, "Anything that provides some more reinforcement for people who are on the fence or delaying always helps." But, he said, "if there is a bump-up in hospitalizations and serious illness, that's when people start to take it seriously."

"It's a shame that's what it takes to get motivation up," he added.

Some public health experts say President Joe Biden undermined any sense of urgency when he declared in a television interview in September that "the pandemic is over." Last week, he tried to draw attention to the new shots by getting his own dose on camera.

While new coronavirus cases leveled off in recent weeks, federal health officials warned Friday that they are confronting elevated levels of other viruses that are roaring back as prepandemic life returns and many Americans, particularly children, lack immunity. The Centers for Disease Control and Prevention issued an advisory about respiratory viruses to thousands of health care providers in an attempt to bolster testing, treatment and vaccination.

At least 4,300 influenza patients were admitted to hospitals in the week ending Oct. 29, the highest for that time period in a decade and nearly double the prior week, according to data released Friday. The flu season began six weeks early this year, at a level not seen since the 2009 H1N1 swine flu pandemic.

After enduring two consecutive winters crushed by an influx of covid-19 patients, American hospitals face the prospect of a third covid winter -- this time, slammed on three fronts.

"With increased RSV infections, a rising number of flu cases and the ongoing burden of covid-19 in our communities, there's no doubt we will face some challenges this winter," Dawn O'Connell, assistant Health and Human Services secretary for preparedness and response, told reporters Friday. "But it's important to remember ... that RSV and flu are not new, and we have safe and effective vaccines for covid-19 and the flu."

Respiratory syncytial virus, a common cause of cold-like symptoms in children known as RSV, continues to rise nationally and strain children's hospitals. There is no vaccine for RSV, but Pfizer plans to seek approval for one administered during pregnancy.

Health officials are bracing for the possibility that covid again overwhelms hospitals, depending on which new variants become dominant, because governments have abandoned efforts to limit transmission and few senior citizens who are most susceptible to severe disease are up to date on their shots.

David Rubin, who tracks respiratory viruses for the PolicyLab at Children's Hospital of Philadelphia, said it's premature to declare a hospital crisis. A youth mental health crisis and a nationwide shortage of pediatric beds have made it harder for the health care system to handle the rise in respiratory cases, he said, but adult hospitals are better positioned to respond.

"It depends on when these peaks occur and how significant of a magnitude we are going to see covid come back this winter," Rubin said. "We have yet to see a real acceleration this year in terms of covid hospitalizations. If you are looking for silver lining, that's one."

The U.S. government has medical supplies including personal protective equipment and ventilators available in its stockpile, but officials say no state has requested additional personnel or supplies.

Those precautions include staying up to date on vaccines, staying home while sick and washing hands regularly. Mask-wearing, a measure rarely adopted during past respiratory virus seasons but proven effective at blunting the spread of coronavirus, is also recommended by government officials.

Jose Romero, director of the CDC's National Center for Immunization and Respiratory Diseases, mentioned well-fitted masks at the end of a list of recommended precautionary measures during the agency's press briefing Friday.

"If a family wishes, they can use masks," said Romero, former Arkansas health secretary.

The lack of exposure to other viruses when people practiced social distancing and wore masks to avoid coronavirus has contributed to the current situation, experts say.

While RSV is among the leading causes for hospitalization in young children, the virus also poses a greater threat to senior citizens and immunocompromised adults. Despite the decline in coronavirus cases, doctors say the medically vulnerable should consider taking heightened precautions due to the circulation of other respiratory viruses.

"If you are at higher risk, don't go into those high-risk areas or mask if you have to go into those areas with an N95," said Aaron Glatt, chief of infectious diseases at Mount Sinai South Nassau in New York.

For the flu season, the strain on hospitals may not be as debilitating to the health care system if the cases are fairly mild and patients are discharged quickly. Lynnette Brammer, an epidemiologist who heads the CDC's domestic influenza surveillance team, said officials have yet to see evidence of a more virulent strain of influenza.

"Right now we are not seeing anything that would lead us to believe it's more severe," Brammer said Friday. "It's just early."

Information for this article was contributed by Sharon LaFraniere of The New York Times and by Fenit Nirappil of The Washington Post.