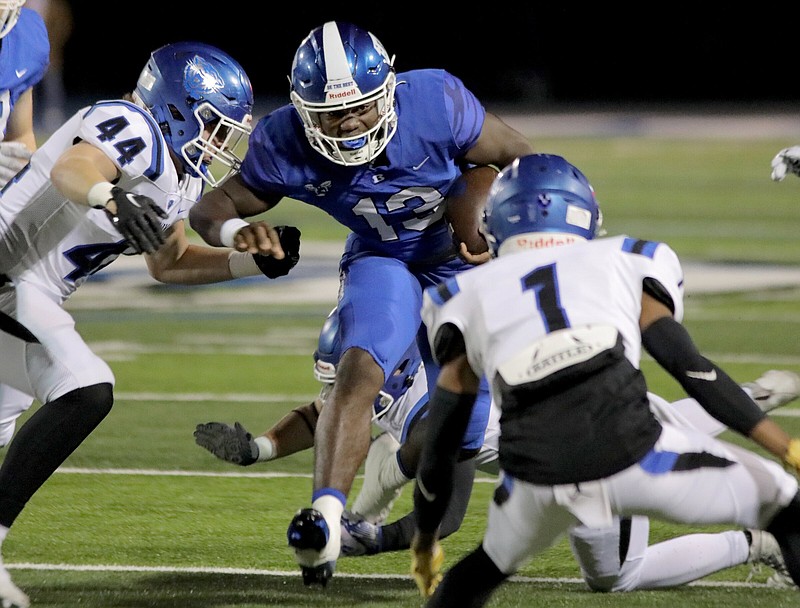 Bryant's Jordan Walker moves through traffic in the red zone in the first half during their game Saturday Nov. 5, 2022 in Bryant. ..Stephen B. Thornton/Special to the Arkansas Democrat-Gazette.more photos available online at arkansasonline.com/116Bryant/

BRYANT -- It wasn't nifty, but Bryant's winning streak against in-state opponents is now 50.

Bryant (9-0, 7-0 7A-Central) earned a first-round playoff bye following its 28th consecutive conference victory and ninth consecutive victory over Conway (8-2, 5-2). The Hornets are seeking their fifth consecutive 7A state championship. Conway, 7A-Central's No. 3 seed, will open the playoffs next week at home against Springdale Har-Ber, 7A-West's No. 6 seed.

Despite generating only 226 total yards, being penalized 13 times and suffering 4 turnovers, Bryant won its 19th consecutive game. The Hornets are 51-1 in their last 52 games and haven't lost to an in-state opponent since September 2018. Saturday's regular-season finale was postponed from Friday night because of the threat of severe weather.

"I would say it's not a pretty win, you know," Bryant Coach Buck James said. "Both teams didn't play well. There's a lot of flags. There were a lot of turnovers, a lot of missed opportunities. I'm sure they're over there shaking their head the same as we are."

Bryant pitched a second-half shutout and limited the Conway's prolific hurry-up, no-huddle Spread attack to just 250 total yards on a staggering 86 plays. Conway entered averaging a Class 7A-best 46.3 points per game, but standout junior quarterback Donovyn Omolo, harassed from the start, was limited to 125 passing yards. He completed 13 of 42 and was intercepted three times.

"He's under all kinds of pressure," Wampus Cats Coach Keith Fimple said. "I have to look at the stats, but I didn't think we were effective running the ball, which kind of hurt us, where we have to pass every down. Of course, anybody that knows defense, you get that where it's just one phase and then you can go after them. They've got some guys that can do that."

Bryant stretched a 21-16 halftime lead to 27-16 on two 34-yard field goals by senior place-kicker Stephen Fuller, the latter coming with 7:51 remaining in the game.

After recovering an Omolo fumble at the Conway 1, junior tailback James Martin scored on the next play to seal the victory with 2:19 remaining.

Walker threw a 19-yard touchdown pass to senior tailback Chris Gannaway on Bryant's first play from scrimmage and ran 2 yards to give Bryant the lead for good, 14-13, with 11:21 remaining in the first half.

The Hornets extended the lead to 21-13 when Walker threw a 14-yard touchdown pass to sophomore wide receiver Karter Ratliff with 7:39 remaining in the first half.

Conway made it 21-16 halftime on a 27-yard field goal by senior place-kicker Adrian Mejia on the final play of the second quarter. Conway's only touchdown came on a 2-yard run by Omolo with four minutes remaining in the first quarter.

But Conway had to settle for two other first-half field goals by Mejia (31 and 29 yards) after having short fields following turnovers.

"We're right in there," Fimple said. "In games like this, it comes down to who makes plays, the two or three that make the huge difference. Hat's off to Bryant. I give the all the credit. Great program. Been around them. They just make plays."