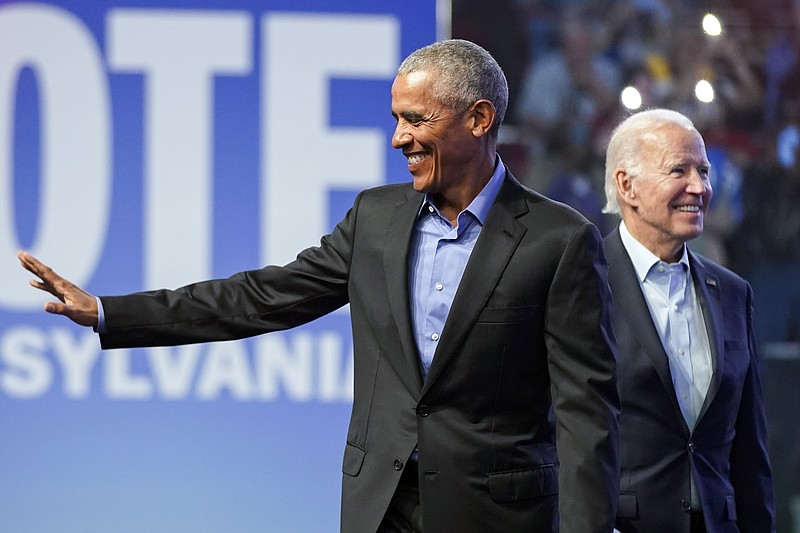 PITTSBURGH -- Four of the six living presidents focused on Northeastern battlegrounds Saturday, but their words echoed across the country as the parties sent out their best to deliver a critical closing argument. Polls across America will close on Tuesday, but more than 36 million people have already voted.

President Joe Biden and former President Barack Obama made their first joint campaign appearance of the midterms Saturday in Philadelphia, and former President Donald Trump held a rally with GOP contenders, punctuating the high stakes of contests for U.S. Senate and governor in Pennsylvania.

Biden and Obama warned Saturday that abortion, Social Security and democracy are at risk as they labored to overcome fierce political headwinds over the final weekend of the 2022 midterm elections.

"Sulking and moping is not an option," Obama told several hundred voters in Pittsburgh. "On Tuesday, let's make sure our country doesn't get set back 50 years."

Before arriving in Pennsylvania, Biden was dealing with anger from some in his party for promoting plans to shut down fossil fuel plants in favor of green energy. While he made the comments in California the day before, the fossil fuel industry is a major employer in Pennsylvania.

"Being cavalier about the loss of coal jobs for men and women in West Virginia and across the country who literally put their lives on the line to help build and power this country is offensive and disgusting," Manchin said.

The White House said Biden's words were "twisted to suggest a meaning that was not intended; he regrets it if anyone hearing these remarks took offense" and that he was "commenting on a fact of economics and technology."

Trump campaigned in western Pennsylvania on behalf of Dr. Mehmet Oz, the Senate nominee, and Doug Mastriano, who is running for governor.

The Oz-Fetterman race could decide the Senate majority -- and with it, Biden's agenda and judicial appointments for the next two years. The governor's contest will determine the direction of state policy and control of the state's election infrastructure heading into the 2024 presidential contest.

Shapiro, the state attorney general, leads in polls over Mastriano, a state senator and retired Army colonel who some Republicans believe is too extreme to win a general election in a state Biden narrowly carried two years ago.

Polls show a closer contest to replace retiring Republican Sen. Pat Toomey as Fetterman recovers from a stroke he suffered in May.

Fetterman has symptoms of an auditory processing disorder, according to the Democrat and his doctor. He has also at times struggled with his speech. His doctors have said he is capable of serving in the job of U.S. senator.

Having little trouble speaking Saturday, Fetterman railed against Oz and castigated the former New Jersey resident as a wealthy carpetbagger who will say or do anything to get elected.

"I'll be the 51st vote to eliminate the filibuster, to raise the minimum wage," said Fetterman, wearing his trademark black hoodie. "Please send Dr. Oz back to New Jersey."

Fetterman hugged Obama after they spoke in Pittsburgh. Later in Philadelphia, Fetterman linked hands with Biden, Obama and Shapiro.

Biden's speech was largely the same he has been giving for weeks -- spotlighting a grab bag of his major legislative achievements, while warning that abortion rights, voting rights, Social Security and Medicare are at risk should Republicans take control of Congress this week.

The president highlighted the Inflation Reduction Act, passed in August by the Democratic-led Congress, which includes several health care provisions popular among older adults and the less well-off, including a $2,000 cap on out-of-pocket medical expenses and a $35 monthly cap per prescription on insulin.

But with a bigger and more energetic audience in his home state, Biden referred to his upbringing in Scranton as evidence of his blue-collar roots and pointed to the state's being critical to his 2020 victory.

Democrats are deeply concerned about their narrow majorities in the House and Senate as voters sour on Biden's leadership amid surging inflation, crime concerns and pessimism about the direction of the country.

Clinton, 76, addressed increasing fears about rising crime as he stumped for New York Gov. Kathy Hochul, whose reelection is at risk even in deep-blue New York. He blamed Republicans for focusing on the issue to score political points.

OZ GETS HELP FROM TRUMP

As for Trump, his evening rally in Latrobe was part of a late blitz that will also take him to Florida and Ohio. He's hoping a strong GOP showing will generate momentum for the 2024 run that he's expected to launch in the days or weeks after polls close.

In recent appearances, Oz has attempted to persuade voters as a former heart surgeon, he can bring "unity" to politics. The physician who has worked to craft a moderate image throughout the fall after earning Trump's endorsement, took the stage long before Trump arrived.

"Here's the deal. I'm not a politician, I'm a surgeon," Oz told thousands of Trump loyalists. "And what surgeons do is tackle big problems and we do it successfully, in my case fixing broken hearts, by working with everybody."

In September, Oz said if he had been in the Senate on Jan. 6, 2021, he would have certified Biden's election, defying Trump's repeated falsehood that he was the victor of a rigged election.

Before that, Oz said he had questions about 2020 election procedures, but he sidestepped when asked directly if Biden's victory was invalid. On guns and abortion, he flip-flopped from earlier liberal positions once he entered the Republican primary, and then seemed to shift depending on the audience.

His inability at first to convince members of the Trump-centric base that he was a part of their movement cost him some supporters early on. As the nominee, he trailed Fetterman by double-digits in polls in August and early September, when surveys showed about one in five Republican voters did not support him. But gradually the race tightened, as Republicans coalesced behind their nominee, with the contest in a statistical tie today.

Oz has kept the former president largely at arm's length in the general election, especially in its homestretch. Asked in a debate last month whether he would support Trump if he runs in 2024, Oz said he "will support whoever the Republican Party puts up."

Bretz has met with Oz, adding, "Dr. Oz relishes the support of Donald Trump, but he doesn't necessarily need the baggage of all the other things people want to associate with him."

In his final TV ads of the race, Oz claims that both major political parties are guilty of "extremism" and leaves viewers with an onscreen slogan: "Bring balance to Washington."

Trump's super PAC has been running ads in the state attacking Fetterman as aligned with Biden and soft on crime. One of the spots seized on Fetterman's recovery, saying he "just isn't right."

Trump decried Saturday what he called "a bloody crime wave" and warned that educators were indoctrinating children with "twisted race and gender" teachings. Of his Democratic opponents, Trump said, "They're either stupid or they hate our country."

"Our country's never been as bad as it now," Trump said. "We have a country in decline."

Trump finished the day at a rally in working-class southwestern Pennsylvania, describing the election in apocalyptic terms.

"If you want to stop the destruction of our country and save the American dream, then on Tuesday you must vote Republican in a giant red wave," Trump told thousands of cheering supporters, describing the United States as "a country in decline."

Information for this article was contributed by Marc Levy, Steve Peoples, Aamer Madhani, Jill Colvin and Michelle Price of The Associated Press, by Trip Gabriel of The New York Times and by Colby Itkowitz, Isaac Arnsdorf and Yasmeen Abutaleb of The Washington Post. 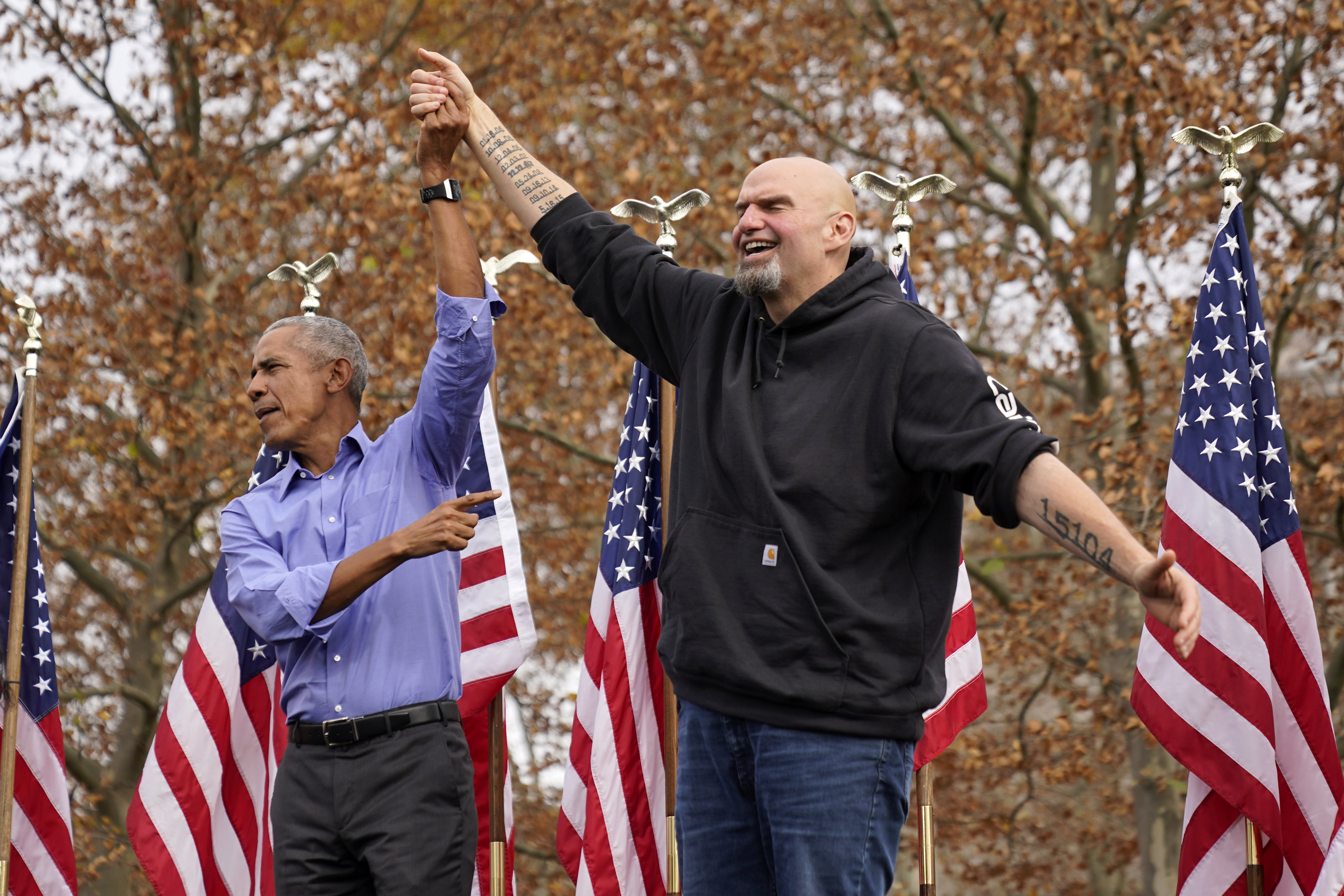 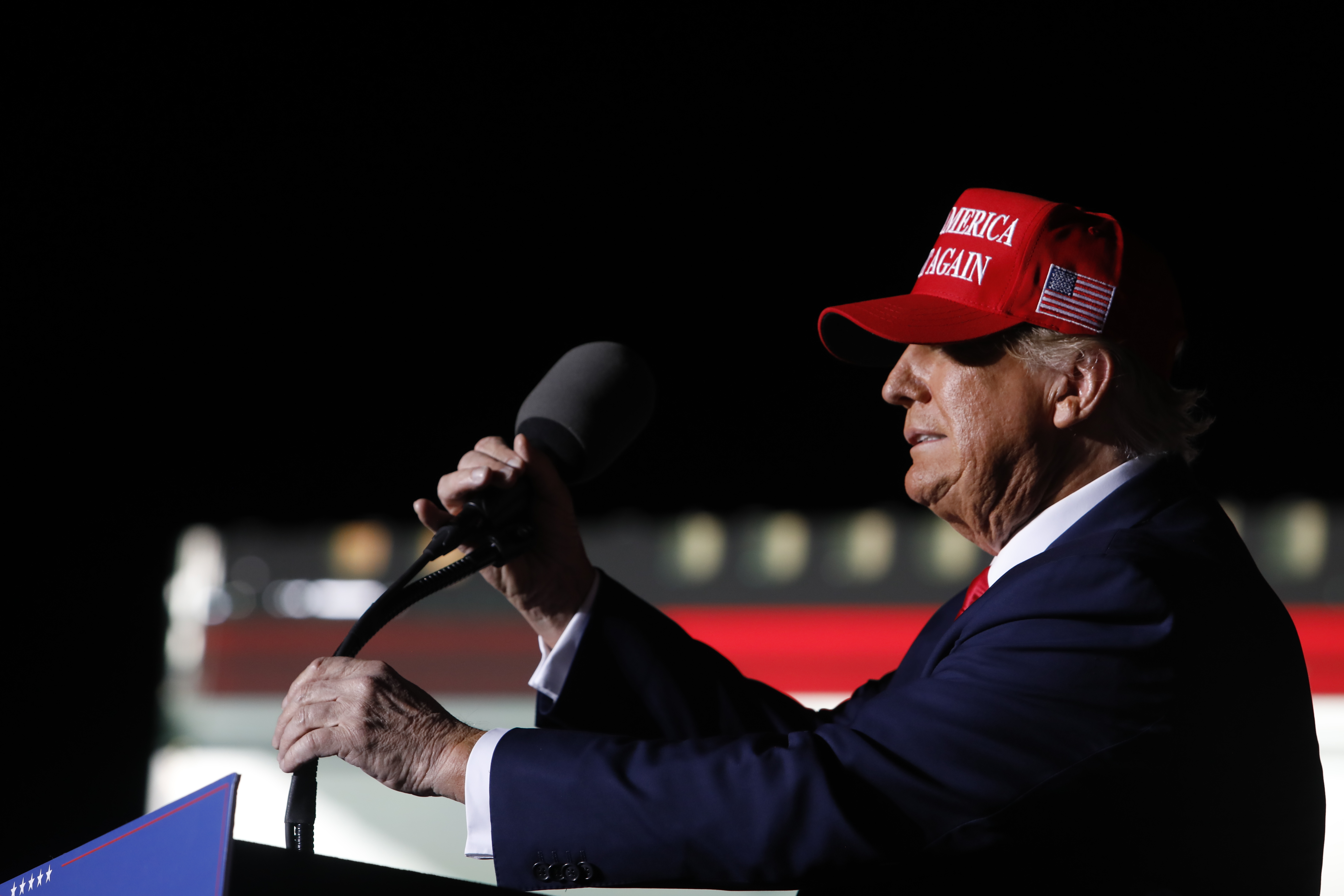 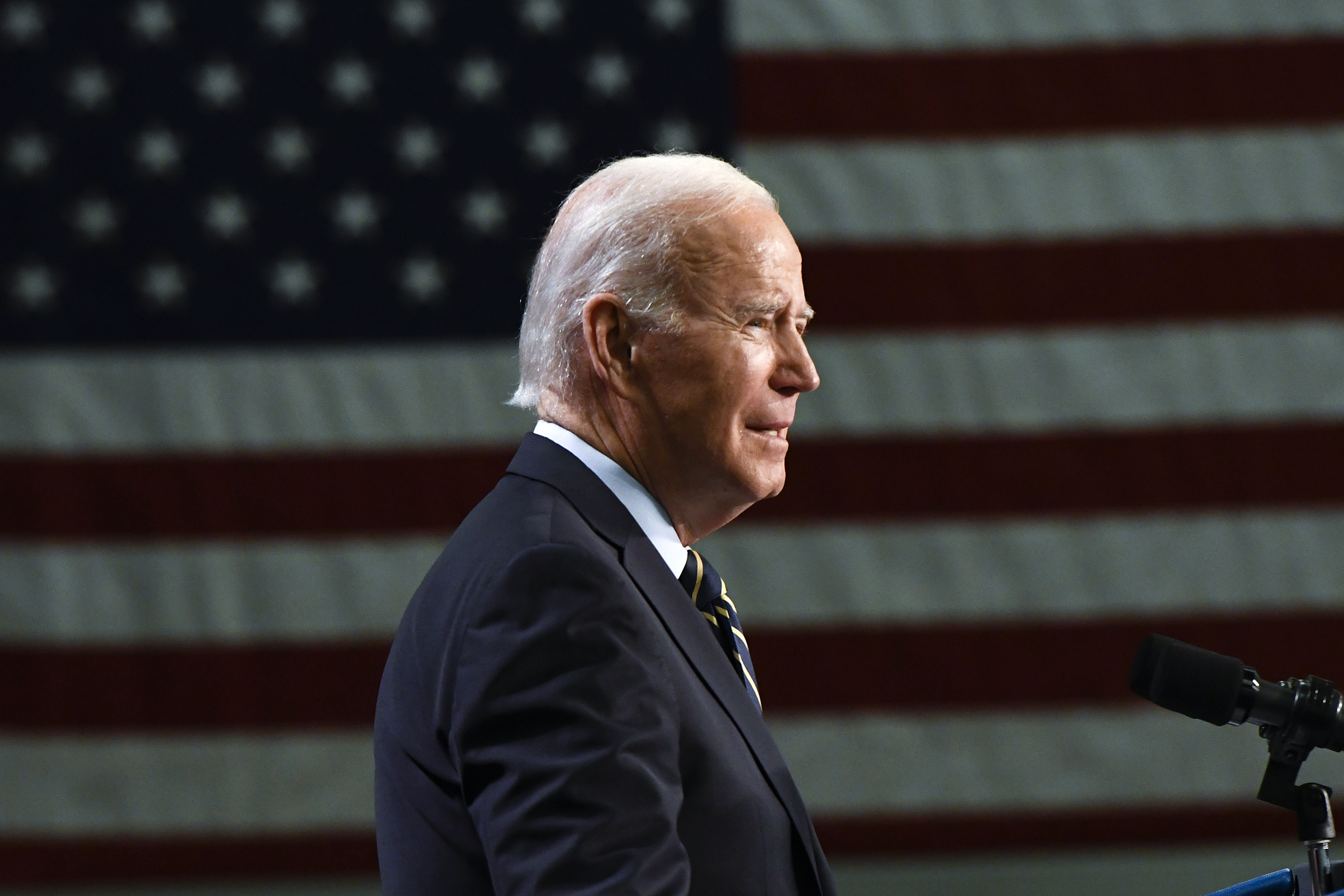 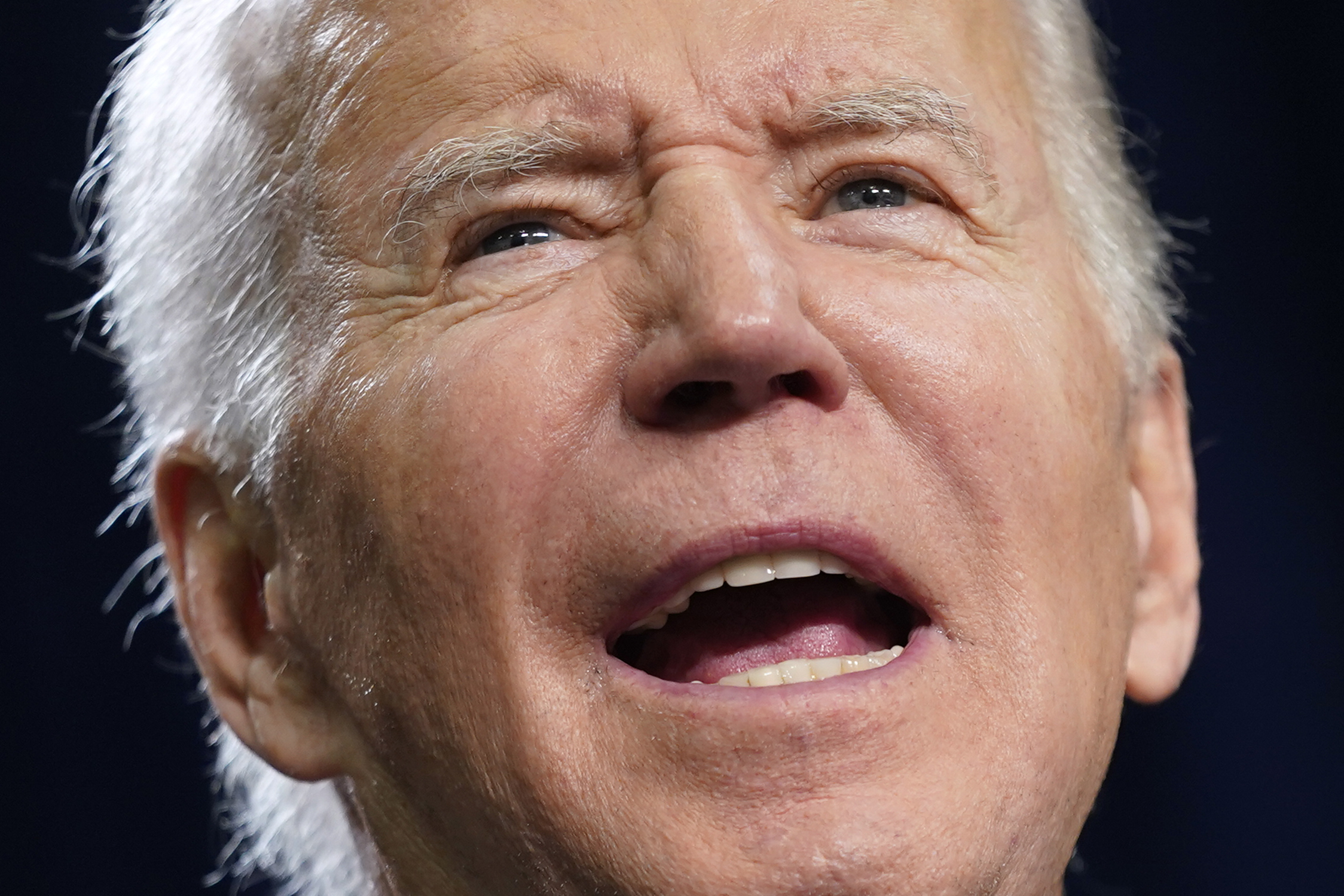 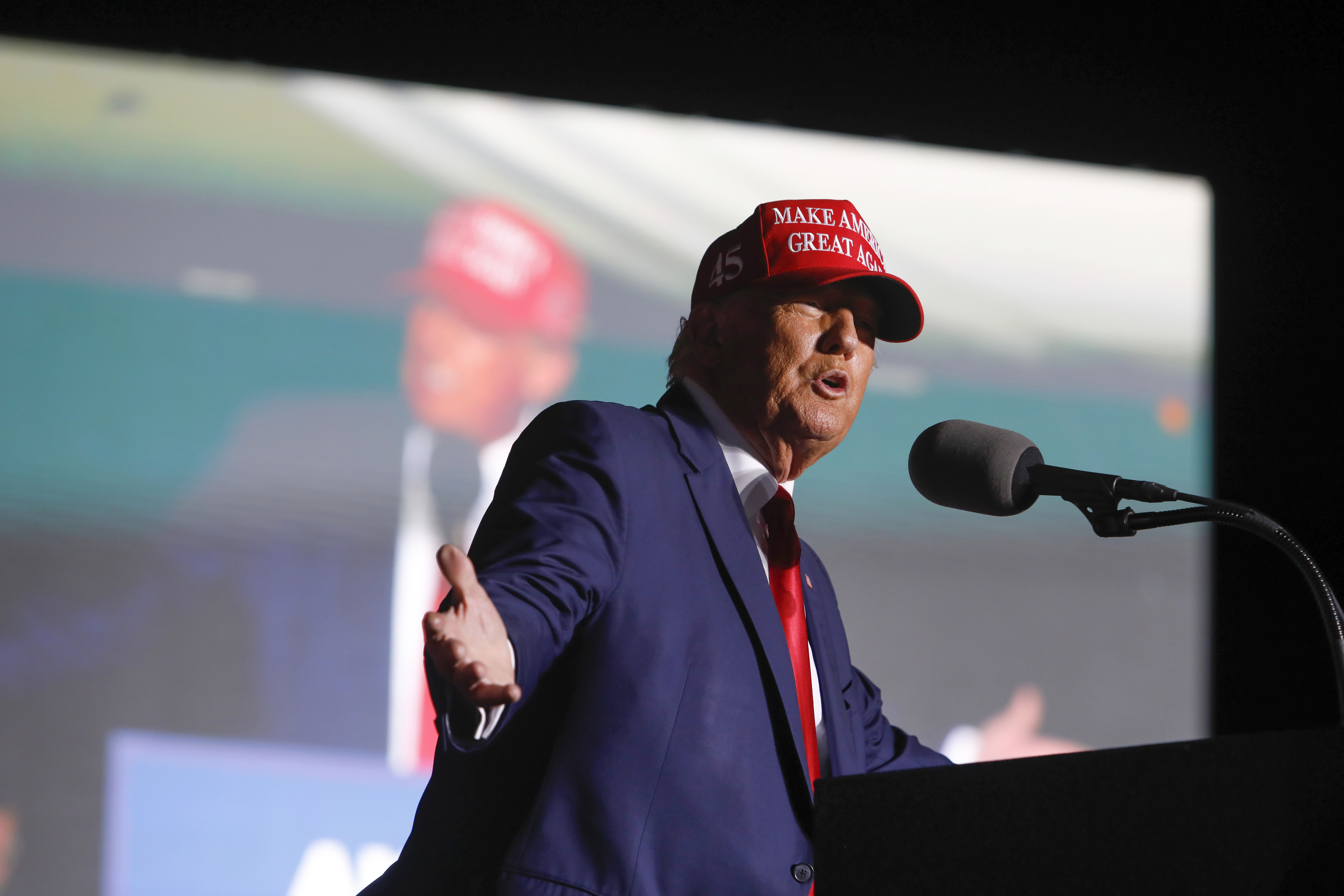 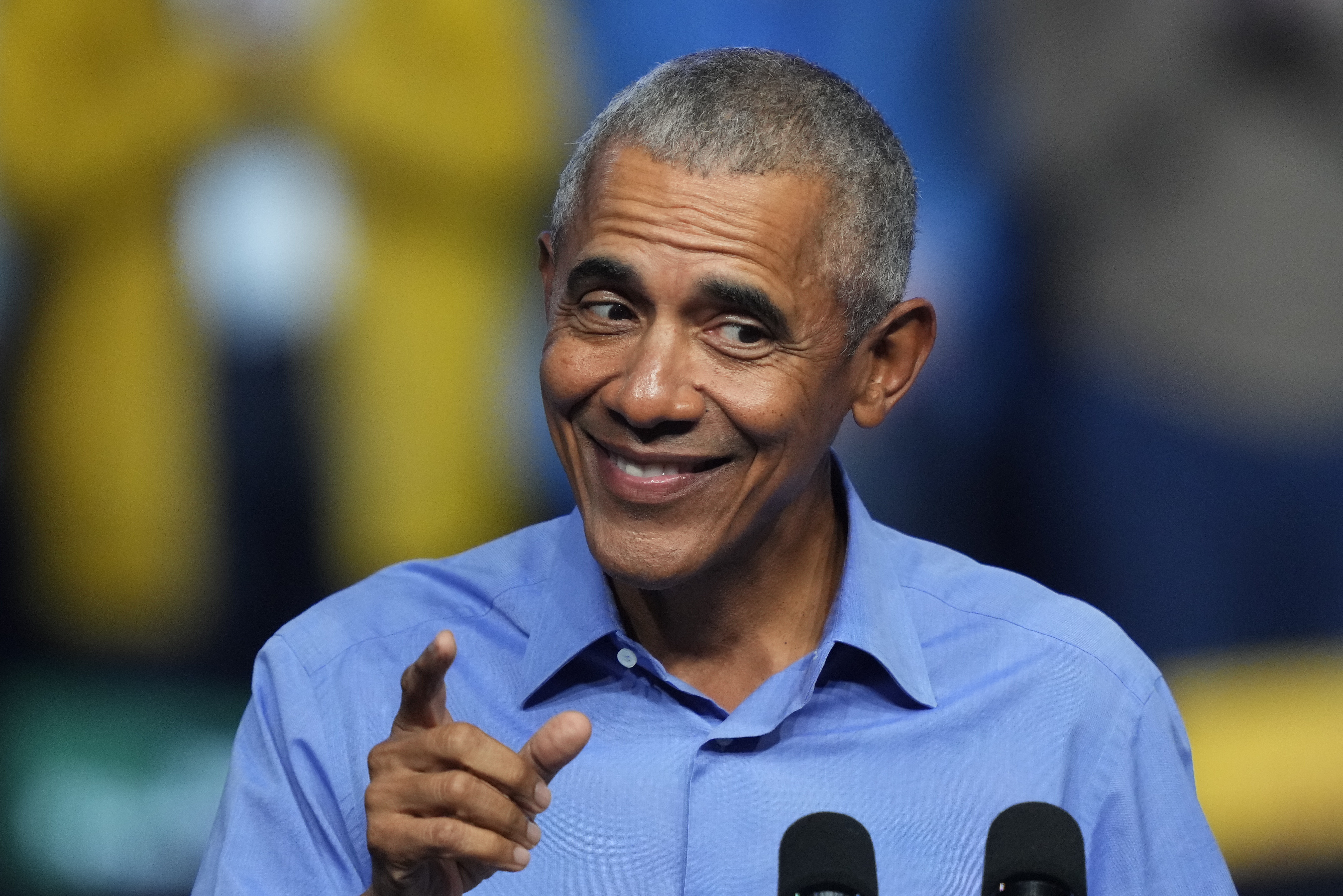 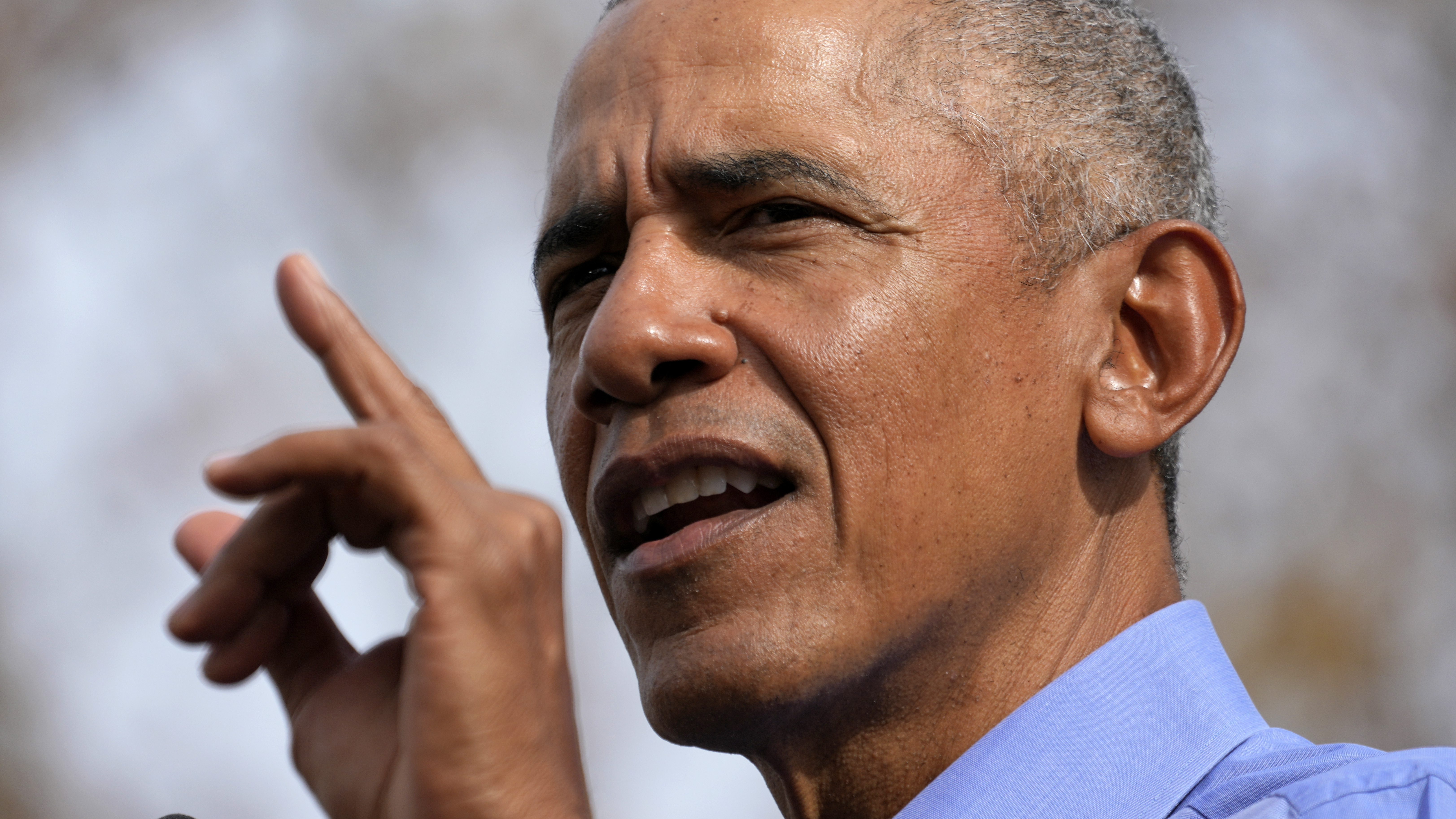 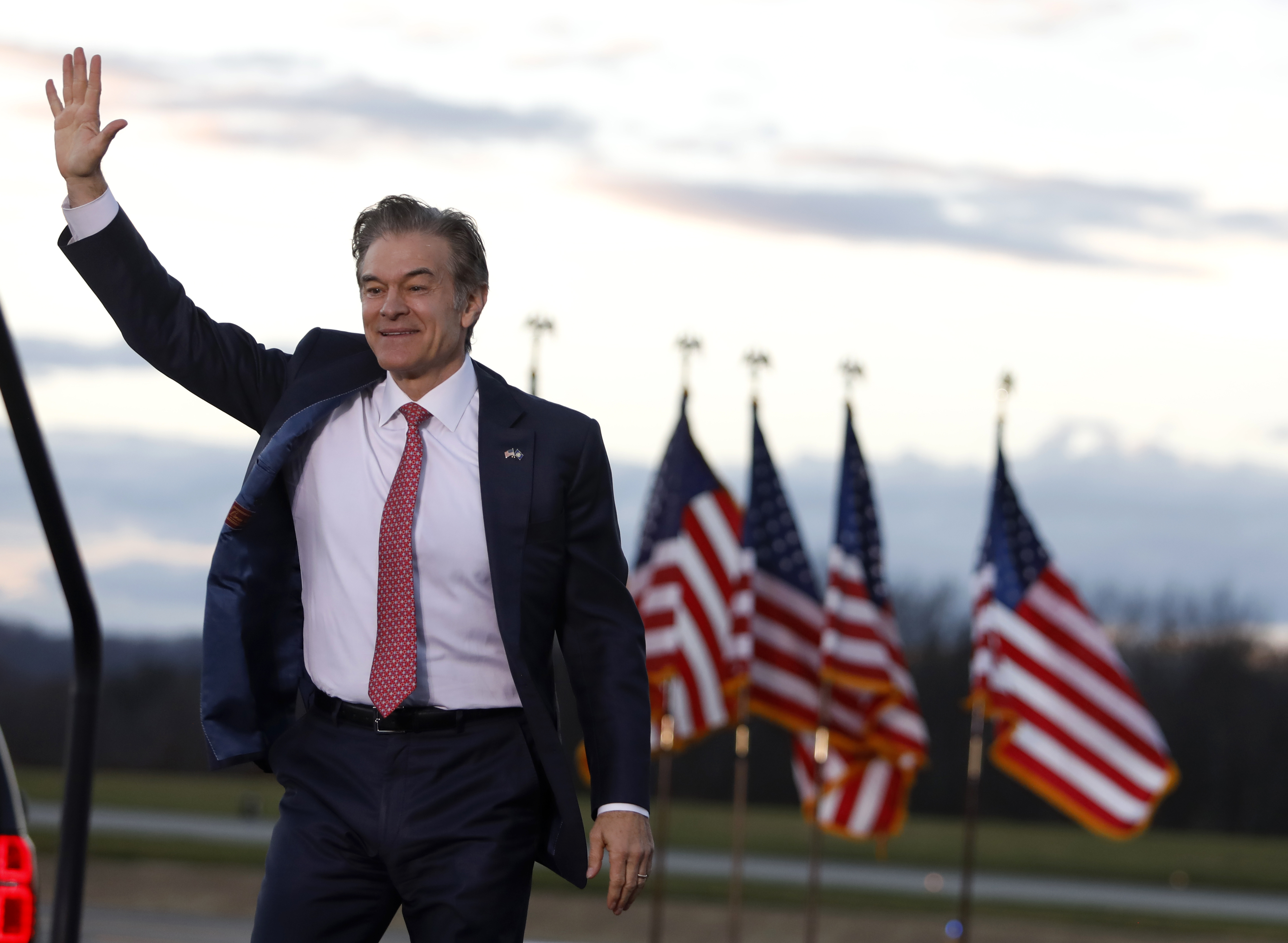 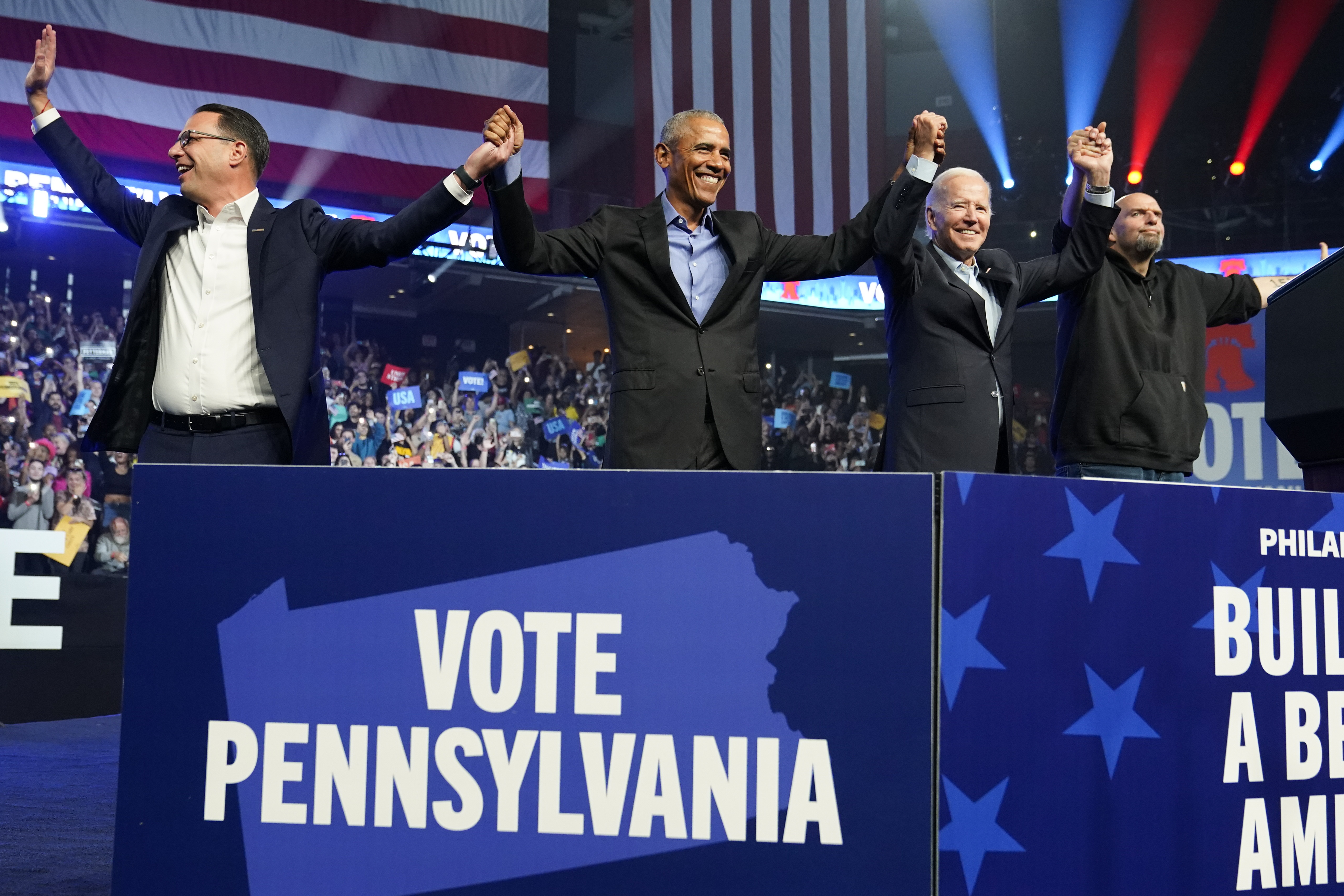