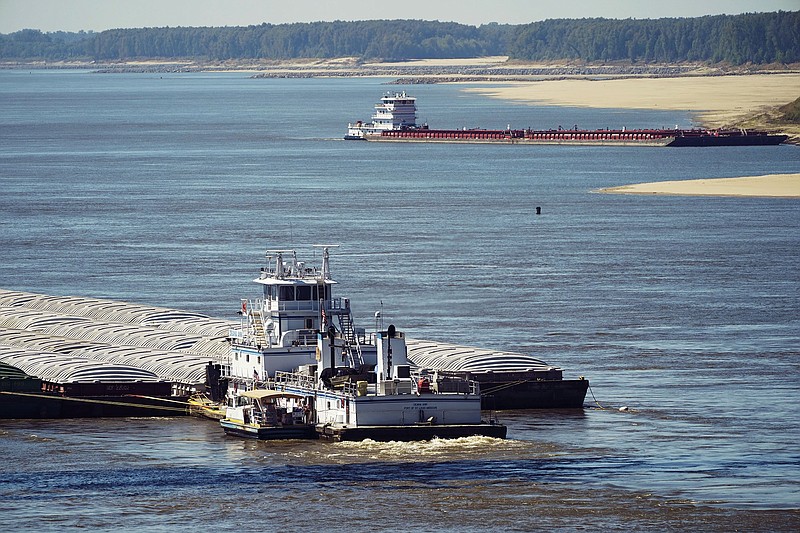 Low-water restrictions on the barge loads make for cautious navigation through the Mississippi River as evidenced by this tow passing a tow moored on the Louisiana-side bank of the river in Vicksburg, Tuesday, Oct. 11, 2022. The unusually low water level in the lower Mississippi River is causing some barges to get stuck in the muddy river bottom, resulting in delays. (AP Photo/Rogelio V. Solis)

In an age where technology is often obsolete soon after it advances, the Mississippi River's importance to everyday life can at times be forgotten -- that is until the water runs low.

"It is our livelihood, for those who live in the Mississippi Valley," Sammy Angel, Arkansas Agriculture Board chairman, said. "We cross over it and never understand the impact it has on our lives. It affects every single thing we do in some shape or fashion."

The Mississippi River hit record low levels in October, and unusual lows since early September, clogging an essential artery through the center of the nation. As barges are carrying about half their supply to navigate the lower waters, the U.S. Army Corp of Engineers continues dredging to keep channels open.

Row crop farmers have been forced to find alternative solutions for storage as grain elevators close while waiting for barges, officials say.

As of Thursday the river sits at -8.3 feet -- or feet below "normal" river level -- near Memphis, according to a National Weather Service gauge.

"It is normal for the river to go below zero some but it is unusual for it to go to -10, but also the length that it stays low is getting pretty long," Memphis National Weather Service meteorologist Scott McNeil said.

The measurement broke the longtime Memphis record of -10.70 feet recorded on July 10, 1988, said Jessica Haas, spokesperson for the Memphis office of the U.S. Army Corps of Engineers.

McNeil said records on the river levels in Memphis have been kept since 1954.

"The Corps understands how drought impacts commercial, recreation and the delays of goods and services to downstream ports and its future impacts on the economy," Haas said in an email statement. "We are working with local, state, and federal partners and stakeholders to mitigate the impacts of current river conditions. The Corps continues to work with industry to improve our resilience from droughts across the Army and our nation."

Haas said dredges are responding as need arises to maintain a 9-foot navigational channel on the river.

"It is the Mississippi River," Tyler Oxner, Arkansas Farm Bureau director of commodity activities and economics, said recently. "It is the largest water drainage system in North America and to see it this low is sort of startling."

A report written by Oxner and John McMinn published in October shows the number of barges unloaded in New Orleans is down 39% from the five-year average. As grain elevators fill up, waiting on a barge, they are offering less for grain due to lack of storage.

"Farmers are facing anywhere from 80 cents under to $1.30 under," the report says.

Cost of barge freight has increased by about 300%, the report says. Freight typically 50 cents a bushel has increased to about $3.50 a bushel in the St. Louis area. A 15-barge tow typically hauls about 767,500 bushels.

As companies lean more on trucking and rail to move goods, those options are also increasing, the report says.

The chain and supply issues from covid-19, Russia and now the Mississippi River will all continue to impact the farmer, the report says.

"We can't move without the river," Oxner said after the report was published. "There are some very tactical challenges that frankly farmers have not really had to think about before now."

Farmers with hundreds of thousands of bushels, who can't store it, will take a large hit, Oxner said. He said those who have on-farm storage might not see as much of a problem.

"They will wait for the barges to move freely again," Oxner said.

The low river levels could be a game changer for some farmers in the future, he said.

"Storage could come into play more that this is a reality now," Oxner said. "If it has happened once, why couldn't it happen again?"

Steve Eddington, Farm Bureau spokesperson, said farm storage could help farmers in other ways during drought conditions, such as on-site storage of water.

"Like everything involving a farmer -- at what point is it profitable?" Eddington said. "What risk are you trying to mitigate, etc. etc. etc. I'm sure there are farmers who are looking at additional storage as something they need to consider."

Clay Young, a farmer in Phillips County, has used alternative methods for storing his grain due to the low water conditions.

"You have to take it as it comes," Young said.

Young has learned to work with the river as some of his land sits inside a levee.

"We are accustomed to having a problem with it either way," Young said. "We've seen floods and lost a portion of our crops. It's been a little different this year."

Young didn't have the on-site storage for his crops, but he rented some space from a neighbor and has been using heavy plastic bags to store his remaining crops.

"We are trying to carry it into December or January," Young said. "As long as the animals don't get in it -- cattle, hogs, mice. We've held stuff into February years past and never had any trouble holding them."

Young grows cotton, corn, soybean and wheat on his farm.

"We've lost as much as 1,500 acres on the farm," Young said. "You have to learn farming. It is not something everyone is accustomed to. You just don't know, it depends on the year."

The hotter and drier summer ended up making a better crop, Young said.

Eddington said the Arkansas farmer is resilient. The river levels might be talked about at the grain stores or the coffee shops amongst farmers, but "the farmer is going to deal with what is in front of them. They are going to make the best of it."

Angel, a Chicot County row crop farmer, knows the importance of the river due to his farm's dependence on it but also his father's previous service as a member of the Mississippi River Commission.

As a farmer in a southern portion of the state, he was able to get all of his crop down the river before the river levels slowed transportation, but likely he and other farmers in the state will still feel effects from the low river levels.

"As our grain goes down stream, our fertilizer for crops comes up stream," Angel said.

The price of fertilizer already increased because of a component that comes from Ukraine, he said.

The drought causing the low Mississippi also is impacting most of the state, he said.

The National Integrated Drought Information System shows severe and extreme drought affecting most of the state.

At extreme drought, pastures are depleted, hay is short and cattle are sold, the system states.

Angel said a majority of cattle production happens in rolling hills where irrigation is not an option.

"Their hay fields, their naturally growing areas for feed are drying up," Angel said. "They are having to reach out to find hay. Some farmers are opting to sell their herds."

Gin trash, a byproduct of cotton, is becoming a substitute for feed, Angel said.

"My facility received a call from Lovette, Texas, looking for gin trash," Angel said. "In years past we've used it as a fertilizer and a compost but they are wanting to purchase it and take it to Texas, because there is none there."

Next year, the drought could impact aquifers used to irrigate crops, Angel said. He said it is too early to know for sure what those impacts could be.